a seasonal report on developer and SMB trends in the cloud

When the concept of open source was established, the goal was to create  a “free and open software” movement where code was accessible to all without restriction or cost. This movement led to a community forming, one built primarily by enthusiasts and hobbyists. Eventually this evolved into the robust ecosystem we know today.

Open source now serves as both a hub of technology innovation and a home for coders of all skill levels to contribute, collaborate, and learn.  But for many participants of open source, it’s also a place of solace. 31%  of our survey respondents said that contributing to open source gives them a feeling of purpose, proof that the community does so much more than simply develop software. Given this strong personal connection many members of the community feel about open source, we knew that we needed to make this year’s edition of DigitalOcean Currents — our third open source focused report — a bit different.

2020 was a year unlike any other, so we wanted to better understand the role open source played in the lives of its members during this unique time. We wanted to learn how the pandemic impacted their participation and what changes they felt within the community. We also wanted to get their perspective on whether or not the core tenets of open source — “free” and “open” — still hold true today.

We decided to focus solely on those who were entrenched in the community of open source in 2020. While we surveyed more than 9,500 developers, this report focuses on the responses of the 4,440 who actively participated in open source over the course of 2020.

The percentage of respondents who actively participated in open source decreased from 63% in 2019 to 47% in 2020. However, the majority of  those who did participate reported an increase in their overall involvement.  63% of respondents said they increased their participation and only 12% reported a decrease.

Only 12% of respondents were against paying contributors for their work with open source. Of the 88% who were either for payment or undecided about it, close to half of them (47%) believed tech companies should fund the payment of open source contributions. This is a much different perspective than that of the original founders of open source who wanted to keep the software free and separate from corporate influence.

59% of participants believe open source is inclusive to people of all demographics, experience levels and locations. This is up slightly (1%) from 2019. Meanwhile, more than a third of respondents believe individuals should be allowed to restrict the use of their code.

How has the pandemic impacted your level of participation in open source? 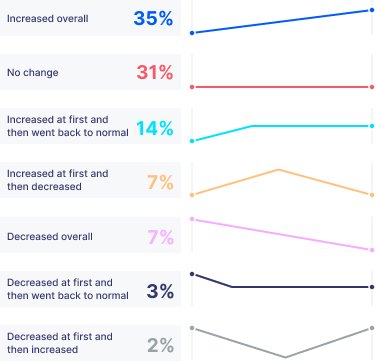 The reasons individuals increased their participation were pretty consistent across the board. Most reported that they had more free time (29%), wanted  to learn (28%) or wanted to contribute to a cause they cared about (15%). However, the top answer did vary slightly by gender. The top reason men participated more was that they had more free time, while the top reason  for women was their desire to use the time to learn.

Why did your participation in open source increase during the pandemic? 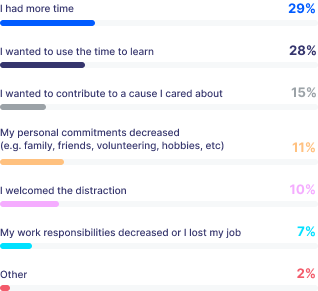 Why did your participation in open source decrease during the pandemic? 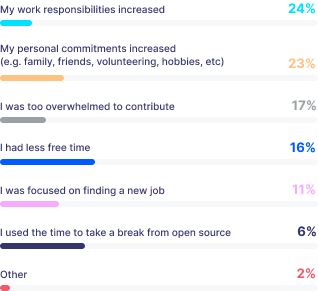 Meanwhile, the reasons for decreasing participation varied based on individuals’ situations at home. Those who described themselves as a primary caregiver (either  as a parent, guardian or a caregiver of another family member), cited increased family responsibilities as the number one reason for contributing less, while those without caregiver responsibilities were more likely to blame increased responsibilities at work. Among the top three reasons for decreased participation was an overall feeling that individuals were simply too overwhelmed to contribute for non-caregivers and that they had less time for those who were primary caregivers.

How have open source projects changed in 2020?

While the pandemic drove various trends in participation throughout 2020, it also impacted the types of projects the community was involved in. Across the board respondents noticed an increase in projects focused on health, social, political, and environmental issues. However, when looking at the breakdowns by geographic region we did notice a few outliers. APAC, which was hit hard by natural disasters including the Australian bush fires, flash flooding in Indonesia,  and a cyclone in India and Bangladesh, reported significantly higher increases in the number of projects focused on environmental issues. Meanwhile, the US, which was in the middle of a presidential election year, had much higher reports of increased projects for political issues than any other location.

The community also changed in light of 2020. Participants reported an increased focus on mental health, inclusivity,  and networking to help others find new jobs and mentoring to help others learn. Individual respondents also took altruistic actions of their own within the community. 29% helped community members learn and develop their skills, while 17% contributed to mission-oriented projects such as ones focused on pandemic relief or social issues.

How has the open source community changed in 2020?

While open source was originally created to make code free and accessible,  many participants are now questioning the practice of not paying individuals for their contributions. More than half of respondents felt that participants should be paid to contribute to open source projects (54%), while about a third remained undecided. Only 12% of respondents were against paying individuals for their contributions.

Do you think individuals should be paid for their contributions to open source? 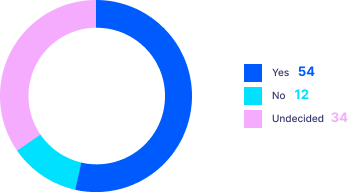 Who should be paid for their work  on open source projects? 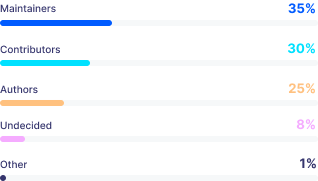 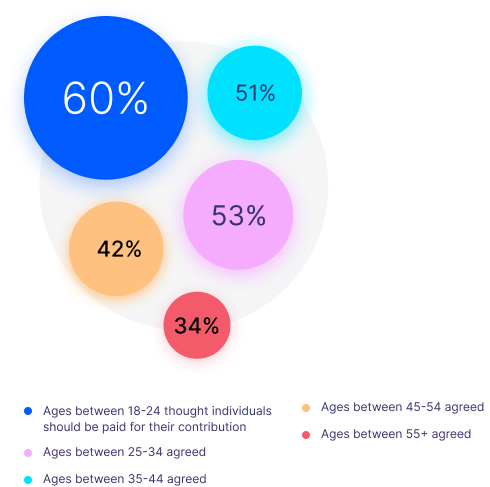 Respondents were aligned on who should be funding these payments. About half of respondents thought tech companies should fund the payment of open source contributions, while a quarter thought project owners or individuals should pay.

Who should fund the payment of open source contributions?

Despite the strong desire for participants in open source to be paid, very few actually are right now. Only 14% of respondents are currently being paid for their work in open source and the majority are given minimal time to work on open source projects at their jobs.

Are you being paid to contribute  to open source? 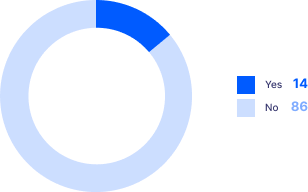 In an average week, what percentage of your time does your company give you to work on open source projects? 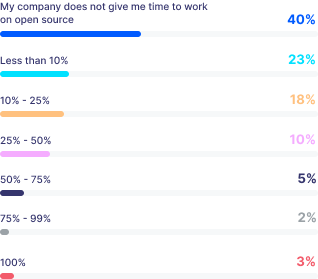 Open source is inclusive to people of all demographic backgrounds, experience levels, and geographic locations.

Unrestricted access to code is another key consideration for the community’s openness. While more individuals were against allowing restrictions for the use of open source code (47%), more than half of respondents wanted to allow restrictions or were undecided. Authors were more likely to advocate for the ability to restrict usage of open source, with 41% of them agreeing with the statement, than maintainers or contributors, of whom only 37% and 31% agreed with the notion of allowing restrictions for open source usage.

Do you think authors should be able to restrict usage of their open source code? 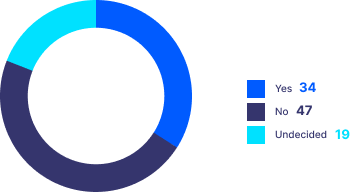 Of those who advocated for allowing restrictions for open source usage, the top reasons cited were situations where the use case goes against the author’s ethical beliefs (35%) or when the organization or individual using the code did not uphold the author’s ethical beliefs (32%). Meanwhile, those who argued against allowing restrictions to open source code felt that the practice would go against the culture of open source (67%) or make the community less inclusive (18%).

What is your age? 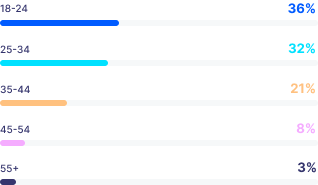 What best describes your primary  involvement in open source?

Trends in the developer community move quickly. As a developer-focused company, it’s vital to keep up with the technologies and tools developers are interested in so we can help them achieve their goals. Currents is DigitalOcean’s seasonal report on developer trends that we created to share knowledge with the community.

There was a problem with your form request. Please try again.

Get the Currents report