Published on August 3, 2022
By Rambabu Posa
Developer and author at DigitalOcean.

Java 9 is a major release and it has brought us a lot of features for developers. In this article, we will look into Java 9 features in detail.

Java 10 has been released, for a complete overview of Java 10 release, go through Java 10 Features. 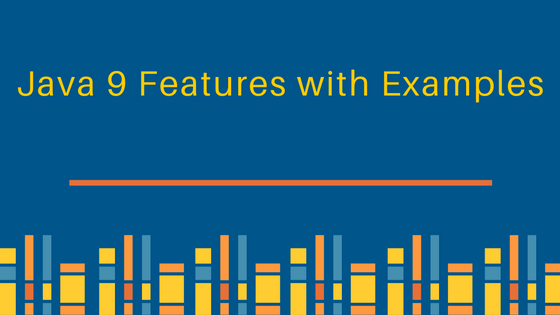 Some of the important java 9 features are;

Oracle Corporation is going to release Java SE 9 around the end of March 2017. In this post, I’m going to discuss “Java 9 Features” briefly with some examples.

If you want to read more about these utility methods, please go through the following links:

If you want to read more about this new feature, please go through this link: Java 9 Private methods in Interface.

One of the big changes or java 9 feature is the Module System. Oracle Corp is going to introduce the following features as part of Jigsaw Project.

Before Java SE 9 versions, we are using Monolithic Jars to develop Java-Based applications. This architecture has a lot of limitations and drawbacks. To avoid all these shortcomings, Java SE 9 is coming with the Module System. JDK 9 is coming with 92 modules (may change in final release). We can use JDK Modules and also we can create our own modules as shown below: Simple Module Example

Here we are using ‘module’ to create a simple module. Each module has a name, related code, and other resources. To read more details about this new architecture and hands-on experience, please go through my original tutorials here:

Java SE 9 is coming with some improvements in Process API. They have added couple new classes and methods to ease the controlling and managing of OS processes. Two new interfcase in Process API:

We know, Java SE 7 has introduced a new exception handling construct: Try-With-Resources to manage resources automatically. The main goal of this new statement is “Automatic Better Resource Management”. Java SE 9 is going to provide some improvements to this statement to avoid some more verbosity and improve some Readability. Java SE 7 example

To read more about this new feature, please go through my original tutorial at: Java 9 Try-With-Resources Improvements

In Java SE 9, Oracle Corp is going to improve CompletableFuture API to solve some problems raised in Java SE 8. They are going add to support some delays and timeouts, some utility methods and better sub-classing.

Here delayedExecutor() is a static utility method used to return a new Executor that submits a task to the default executor after the given delay.

We know, Java SE 7 has introduced one new feature: Diamond Operator to avoid redundant code and verbosity, to improve readability. However, in Java SE 8, Oracle Corp (Java Library Developer) has found that some limitations in the use of Diamond operator with Anonymous Inner Class. They have fixed those issues and going to release them as part of Java 9.

Here we are using just “List” without specifying the type parameter.

In Java SE 9, Oracle Corp has added some useful new methods to java.util.Optional class. Here I’m going to discuss about one of those methods with some simple example: stream method If a value present in the given Optional object, this stream() method returns a sequential Stream with that value. Otherwise, it returns an empty Stream. They have added “stream()” method to work on Optional objects lazily as shown below:

Here Optional.stream() method is used to convert a Stream of Optional of Employee object into a Stream of Employee so that we can work on this result lazily in the result code. To understand more about this feature with more examples and to read more new methods added to Optional class, please go through my original tutorial at: Java SE 9: Optional Class Improvements

In Java SE 9, Oracle Corp has added four useful new methods to java.util.Stream interface. As Stream is an interface, all those new implemented methods are default methods. Two of them are very important: dropWhile and takeWhile methods If you are familiar with Scala Language or any Functions programming language, you will definitely know about these methods. These are very useful methods in writing some functional style code. Let us discuss the takeWhile utility method here. This takeWhile() takes a predicate as an argument and returns a Stream of the subset of the given Stream values until that Predicate returns false for the first time. If the first value does NOT satisfy that Predicate, it just returns an empty Stream.

To read more about takeWhile and dropWhile methods and other new methods, please go through my original tutorial at: Java SE 9: Stream API Improvements

In Java SE 8 and earlier versions, @Deprecated annotation is just a Marker interface without any methods. It is used to mark a Java API that is a class, field, method, interface, constructor, enum etc. In Java SE 9, Oracle Corp has enhanced @Deprecated annotation to provide more information about deprecated API and also provide a Tool to analyze an application’s static usage of deprecated APIs. They have add two methods to this Deprecated interface: forRemoval and since to serve this information.

In Java SE 9, Oracle Corp is going to release New HTTP 2 Client API to support HTTP/2 protocol and WebSocket features. As existing or Legacy HTTP Client API has numerous issues (like supports HTTP/1.1 protocol and does not support HTTP/2 protocol and WebSocket, works only in Blocking mode and lot of performance issues.), they are replacing this HttpURLConnection API with new HTTP client. They are going to introduce a new HTTP 2 Client API under the “java.net.http” package. It supports both HTTP/1.1 and HTTP/2 protocols. It supports both Synchronous (Blocking Mode) and Asynchronous Modes. It supports Asynchronous Mode using the WebSocket API. We can see this new API at https://download.java.net/java/jdk9/docs/api/java/net/http/package-summary.html HTTP 2 Client Example

Please go through my original tutorial at: Java SE 9: HTTP 2 Client to understand HTTP/2 protocol & WebSocket, Benefits of new API and Drawbacks of OLD API with some useful examples.

In Java SE 9, Oracle Corp is going to introduce a new Multi-Resolution Image API. Important interface in this API is MultiResolutionImage . It is available in java.awt.image package. MultiResolutionImage encapsulates a set of images with different Height and Widths (that is different resolutions) and allows us to query them with our requirements.

In this section, I will just list out some miscellaneous Java SE 9 New Features. I’m NOT saying these are less important features. They are also important and useful to understand them very well with some useful examples. As of now, I did not get enough information about these features. That’s why I am going to list them here for a brief understanding. I will pick up these features one by one and add to the above section with a brief discussion and example. And finally write a separate tutorial later.

I will pickup these java 9 features one by one and update them with enough description and examples. That’s all about Java 9 features in brief with examples.

Ask a questionSearch for more help
Was this helpful?
JournalDev • January 2, 2020

As I understand List immutableList = List.of(); would create an empty immutable list. But, what is the point, why would it be used for?

Its really nice content. but some of the links which you have specified for detail article are not redirecting to specified page like Enhanced @Deprecated annotation .Can you please check. and update

Awesome information. Keep it up… Thank you…