a seasonal report on developer and SMB trends in the cloud

Currents is DigitalOcean’s regular report on how developers, startups, and small-to-medium-sized businesses are engaging with technology today. In this edition of Currents, we surveyed over 2,500 developers around the globe on their participation in the open source community, their job satisfaction, and the biggest challenges they face. We dug into emerging trends including serverless and low-code solutions, and examined the popularity of containerization systems and different coding languages. We looked into how factors such as years of job experience and company stage factor into technology usage, and examined how the perceptions of minority groups differ around progress in Diversity and Inclusion.

The results demonstrate some clear trends across all developers, and some findings that differ based on company size and years of experience. Throughout our survey, one trend that comes through across respondents is the impact that the Great Resignation has had on developers. Following the Great Resignation of 2020–2021, we are now seeing a developer talent shortage, motivated largely by compensation and a desire for remote work. There is also a small but clear movement for developers to leave jobs to start their own companies, indicating that entrepreneurship is strong among this group. Those who remain at their jobs are also stretched thin, with technical debt and lack of resources as top challenges for developers today.

Other main findings show that organizations continue to rely on open source projects for their software development, and participation in the community remains strong. Low-code and no-code solutions, which enable developers and non-developers to create applications without advanced coding skills, have garnered mixed feelings as they become more common, but Kubernetes and serverless solutions are both growing in adoption.

Despite the industry’s heavy reliance on open source projects and those who maintain them, most contributors and maintainers have not been paid for their work, and many developers believe that companies should be providing employees more time to contribute upstream to open source projects.

Diversity and inclusion in open source

Our findings suggest that inclusivity in open source has improved over the past few years, with 65% of respondents agreeing or strongly agreeing that the community is inclusive, compared to 59% who said the same in 2021 and 58% in 2020. However, of those who identify as being part of a minority group, sentiments are slightly more mixed—26%% who self-identify as a minority disagree that open source is inclusive, compared to just 12% of non-minority groups.

The Great Resignation has been much discussed in the past two years, with an estimated 44% of workers looking for new jobs according to some reports. Technology companies are experiencing the same phenomenon, particularly among developers, who are highly in demand. This has led to a developer talent shortage even in large companies and reports of burnout for those who remain.

Motivations for leaving jobs are consistent among both those who have already left and those considering leaving, with compensation, remote or flexible work environments, and better benefits being the top factors that motivate people to leave jobs, especially for younger developers. We also find that 8% of both those who have left a job and those who are looking to leave have left to start their own company, demonstrating the flexibility that developers have today.

We also examined popular programming languages and developers’ perceptions of upcoming trends, finding that perceptions of many trends differ based on years of experience, with less experienced developers more likely to try out new trends in computing such as automation, blockchain/Web3, and low-code or no-code. 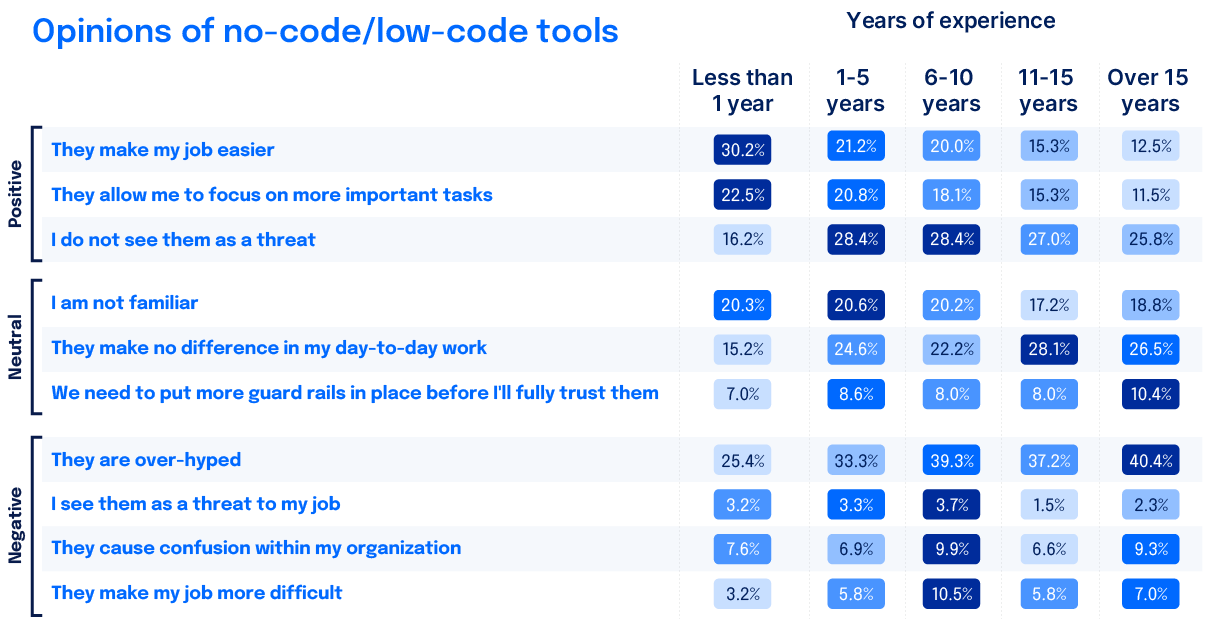 This survey was conducted through an online survey link from April 19, 2022, to May 19, 2022, and garnered 2,598 completed responses. The link was distributed to various sample sources, including DigitalOcean email lists and open source groups. Respondents all identified as having technical roles, including frontend, backend, and full-stack developers, system administrators, DevOps specialists, and more. Those without technical roles were screened out of the survey.

There was a problem with your form request. Please try again.