A seasonal report on developer and SMB trends in the cloud

In our latest edition of Currents, DigitalOcean’s regular research report, we examined how startups and SMBs are faring today. With an impending recession and regular news of layoffs and spending cuts throughout the technology industry, we wanted to find out how startup founders and small business executives are really feeling. How negatively is the economy impacting them, and what are their priorities going into 2023? What opportunities do they see for the future, and how are they planning to future-proof their businesses?

We examined these topics, along with other areas that are top-of-mind for businesses today, including security threats, cost of technology, funding concerns, and cloud migration. To get a pulse on these items, we surveyed a targeted group of founders, CEOs, and executives at startups and small businesses across industries, with a focus on those building digital solutions. The below results are based on completed responses from 554 respondents, 70% of whom identify as CEO, founder, or owners, and 23% who identify as CTOs.

Here’s what we found:

While it’s clear that small businesses are not immune to the wider economic trends today, founders and CEOs remain cautiously optimistic about the future of their businesses. They understand that technology can help them streamline operations and future-proof their organizations—and they’re willing to make the investments necessary to make that happen. They are also looking for cost-effective technology solutions that will meet their needs, while also increasing efficiencies within their business. Read on for the full findings from this edition of Currents.

While economic uncertainty has been a large headline over the past few months and small businesses are feeling the impacts of that, they also have optimism over the future. Just 20% say that ‘economic uncertainty’ is their top challenge today, with an additional 16% citing meeting revenue targets as their top challenge. When asked specifically about how the economy has impacted their business, 46% say ‘somewhat negatively’, but 31% say there has been no impact and 15% say the economic situation has actually been positive for them. 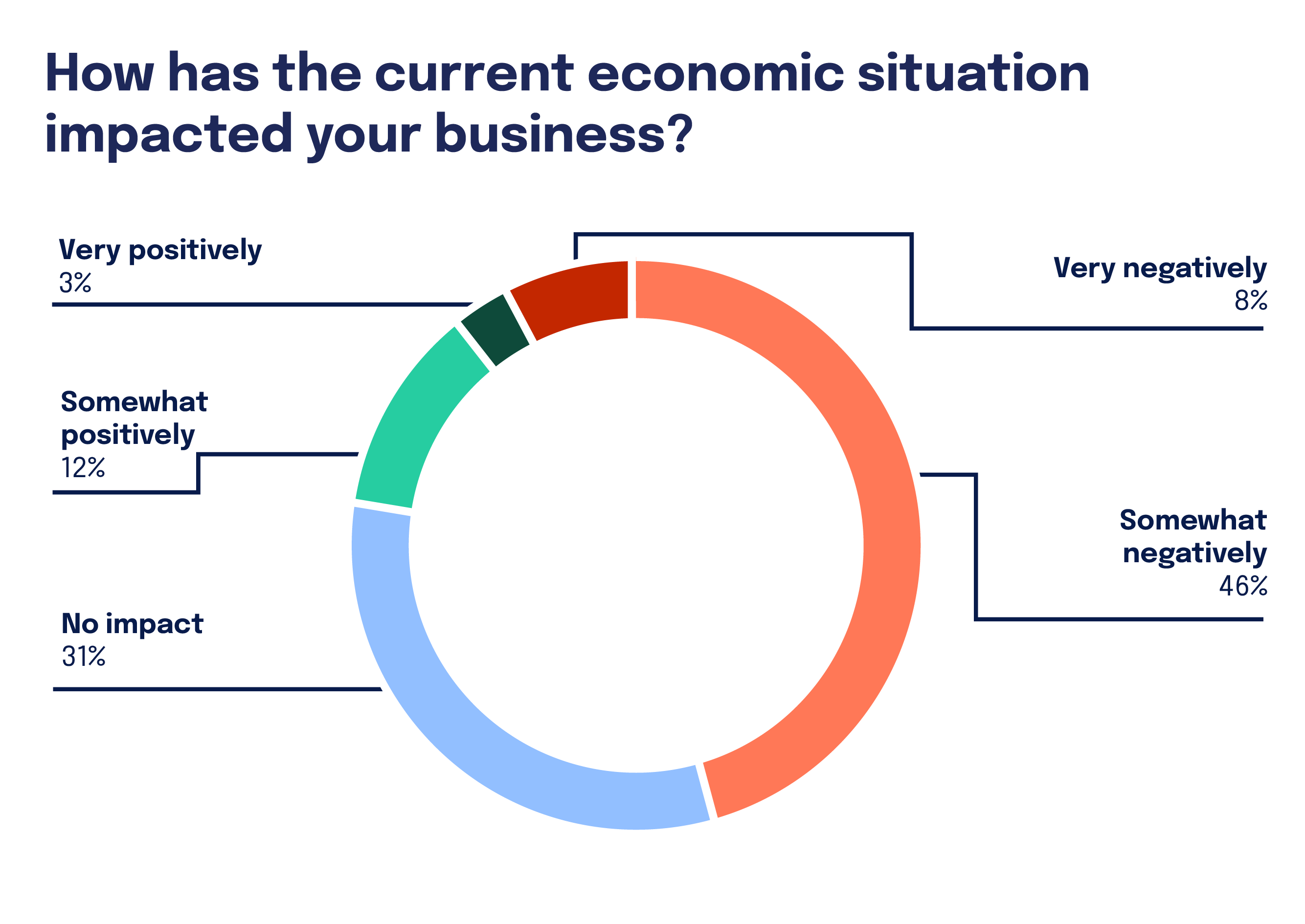 Looking at changes businesses are making, 37% say they have cut back spending, 21% have raised prices, and 24% have made changes to their products/services, however 26% have not made any changes. Of those who haven’t made changes, 48% say they definitely or probably won’t need to make any changes in the next 6 months. \n\nOf the businesses cutting spending, we found that the top areas of spend cut back include technology spend (53%), marketing (46%), and cloud spend (42%). 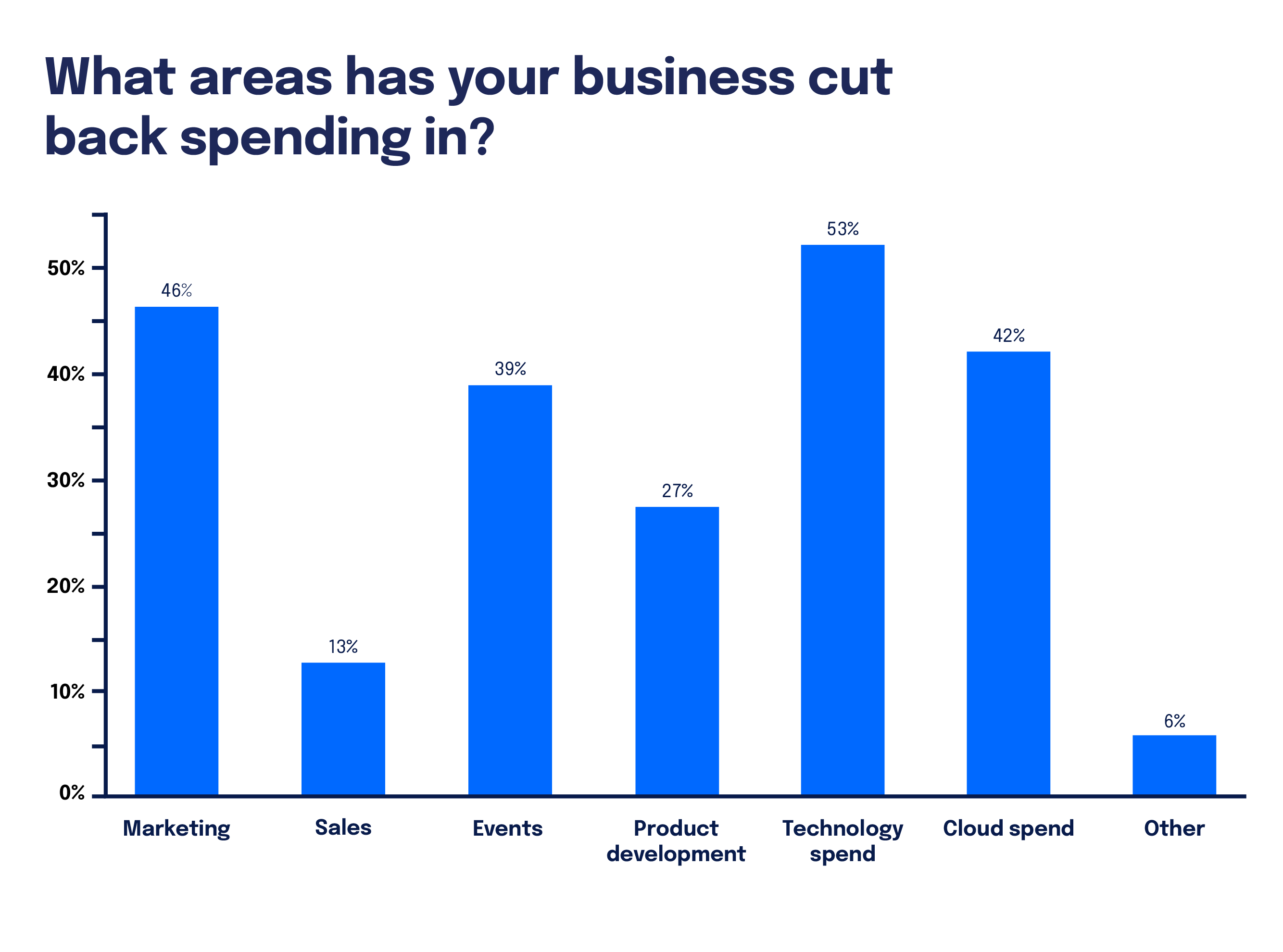 Eighty-four percent believe that investing in the right technology helps future-proof their business. The technologies small businesses are looking to invest in include automation/self-service technology solutions (53%), public cloud services (41%), and managed services or managed hosting (32%).

In addition, of the 43% who say technology has positively impacted their revenue or costs in the past year, 67% cite increased efficiency, 47% say technology has saved them money, 39% say it’s enabled them to grow more quickly, and 23% say they have been able to hire fewer employees.

Looking ahead to 2023 and beyond, we find that startups and small businesses feel positive about their future: 63% say their business outlook is somewhat or very positive for 2023, and 79% have a positive outlook for the next 3 years, with only 5% saying they feel their business outlook for the next 3 years is negative. Similarly to earlier questions regarding economic impact, sole proprietors were slightly less optimistic about 2023–51% said they feel somewhat or very positive, while 64% of businesses with 2-9 employees and 69% of those with 10-24 employees feel positive about 2023. 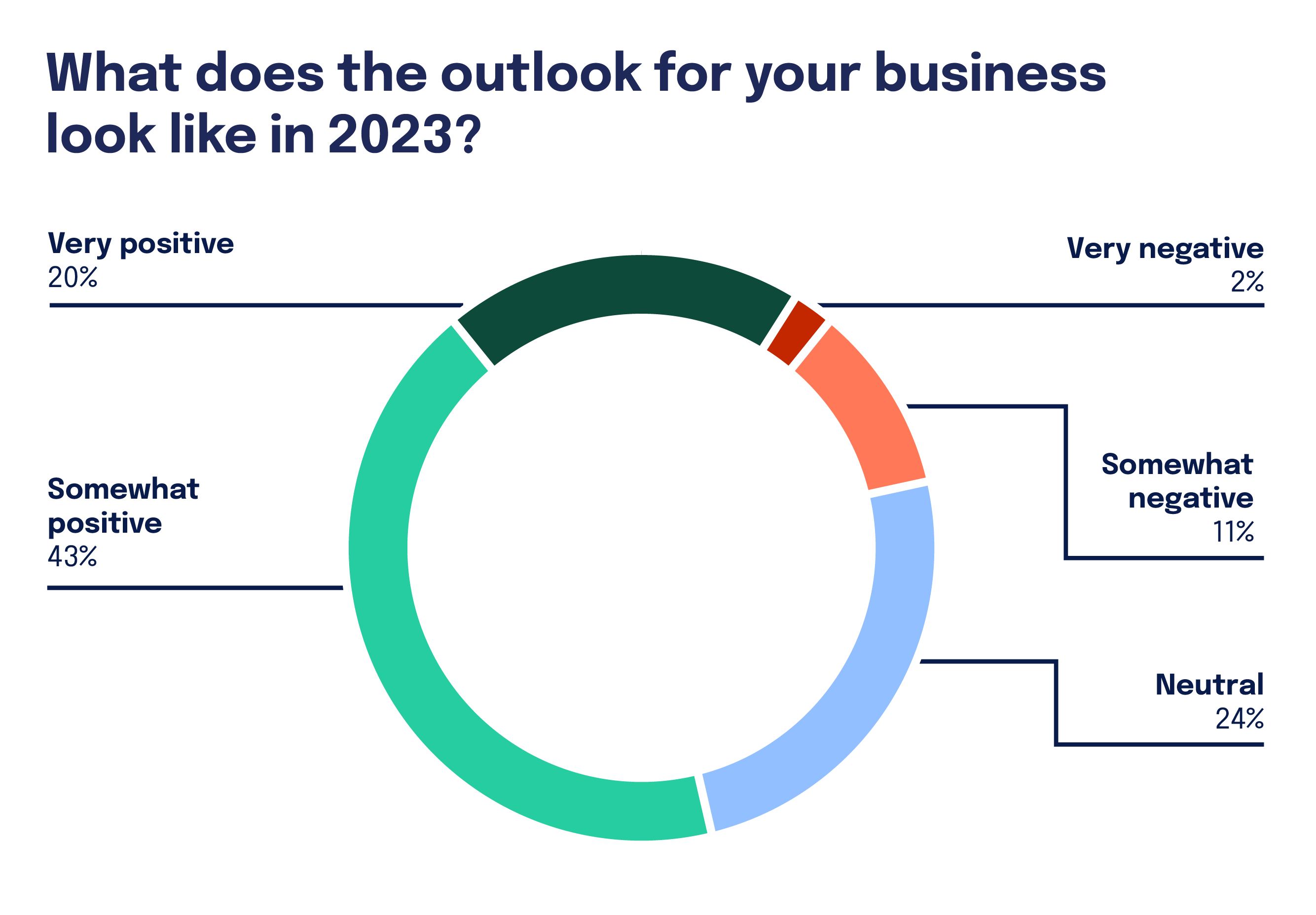 There has been speculation around the funding landscape for startups in recent months, and many have been advised to delay new funding. Overall, 23% are planning to raise funds in the next 6 months, and 29% have delayed raising new funds. Of those who have delayed fundraising, 42% believe they will only delay fundraising for 12 months or less, and an additional 27% believe they will delay fundraising for 12-24 months.

Security continues to be top concern

With reports of phishing and cyber attacks on the rise, we also wanted to understand how startups and small businesses are thinking about security risks and priorities as they move into 2023. We found that lack of time to manage security is the number one concern amongst small-to-medium sized businesses, cited by a quarter of respondents. Data loss events/data theft was the second most cited concern, at 23%, followed by a lack of budget to manage security. 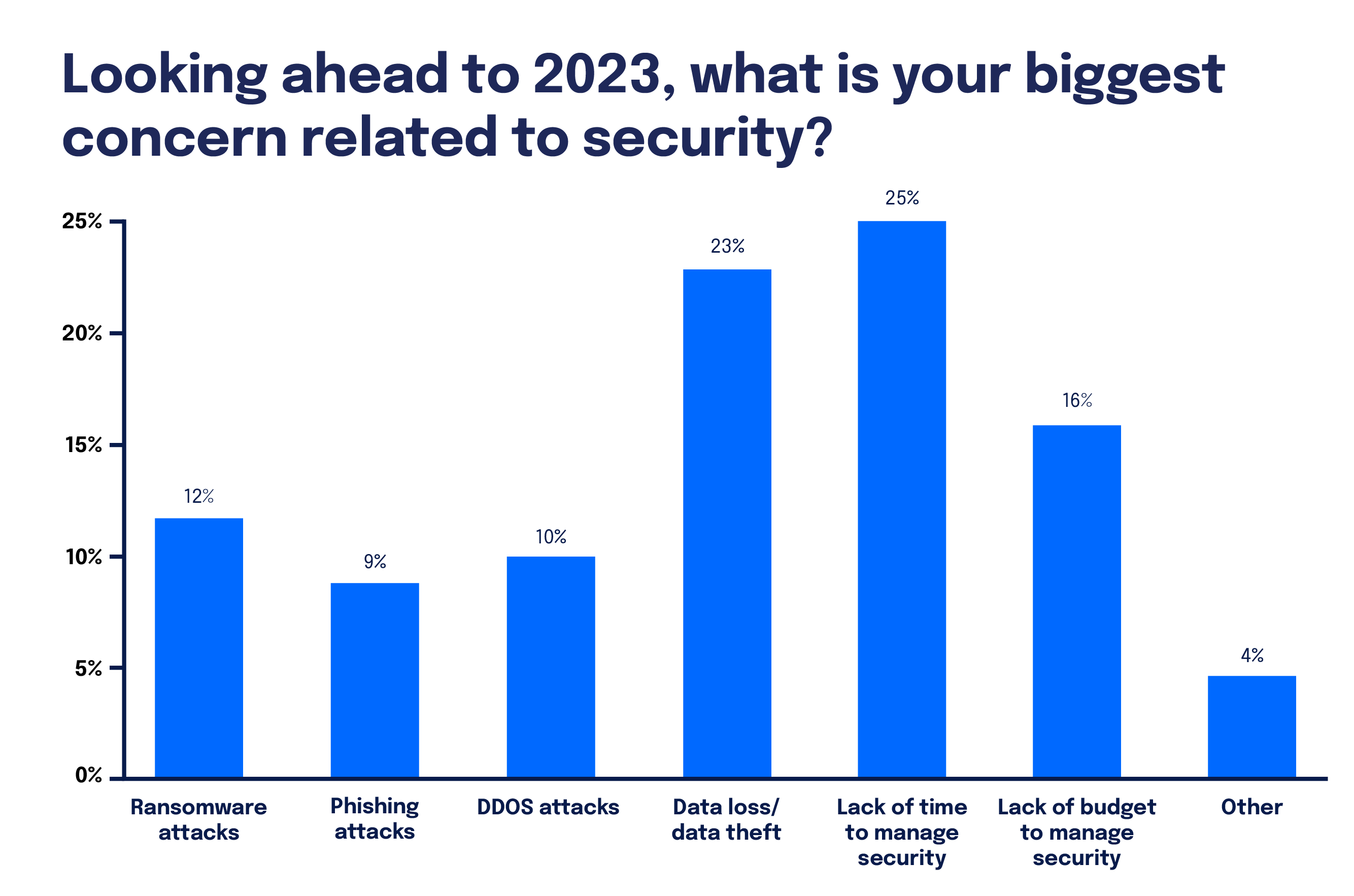 Compared to this time a year ago, a majority (54%) say they are more concerned about cyber security now, though only 8% reported experiencing a security breach in the past year.

Multi-cloud usage also continues to be popular amongst respondents–49% say they use a multi-cloud setup, compared to 46% of cloud-native businesses who reported using multiple clouds in our 2021 survey.

With cloud and technology spend going up for most businesses, migrating cloud providers is one area that startups and small businesses may look to in order to reduce costs. However, cloud migration itself can be a time consuming task, especially for small businesses who may need outsourced help to migrate. We found that half of respondents have migrated their cloud infrastructure in the past, with 37% saying the experience was somewhat difficult and 12% stating it was very difficult.

Cost savings is the top driver for cloud migration for both those who have migrated in the past (70%), and those who have not migrated (65%). Other drivers for migrating cloud providers are additional products/features and solutions tailored to their business needs. 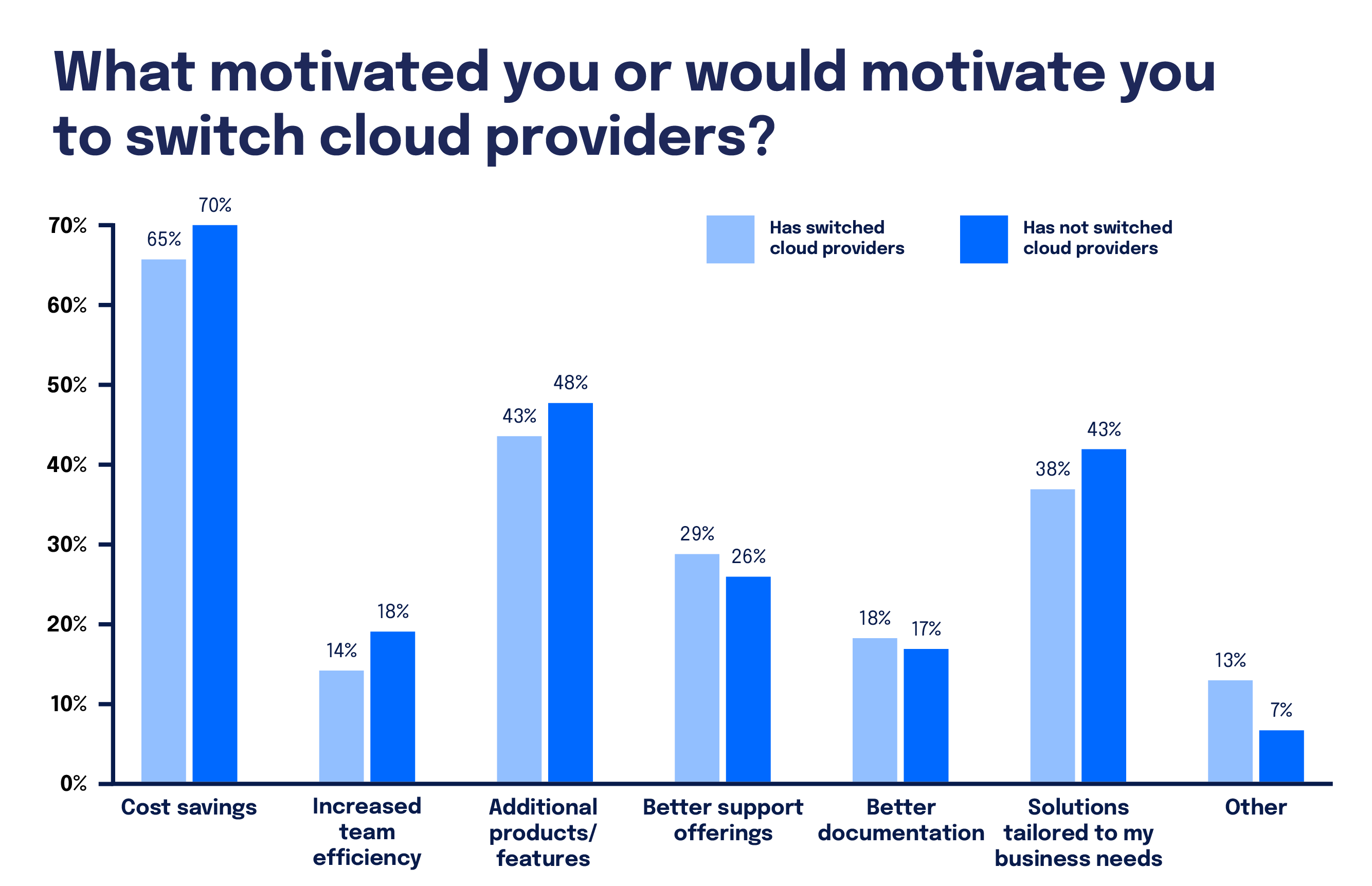 While economic uncertainty is likely to continue for the coming months, in this edition of Currents we found that startups and SMBs are feeling optimistic about the future. As large technology companies conduct layoffs, smaller businesses are looking to technology to optimize their costs, and some even see opportunities related to the current environment. Those businesses that can stay nimble and invest in the right technologies for them will experience streamlined operations and cost efficiencies that will stay with them even as they scale. This survey was conducted through an online survey link from October 18th to November 7th, 2022, and garnered 554 completed responses. The link was distributed to various sample sources, including DigitalOcean email lists, Cloudways email lists, and tech founder groups. Seventy percent of the respondents were CEO/founder/owners, 23% were CTOs, and the remainder were C-Level or VP-level executives.

Respondents represent 76 countries, with 27% being in the United States, 8% in the UK, 5% in India, 5% in Germany, and 5% in Canada. The questionnaire was developed by DigitalOcean and was distributed via link through email and social media channels to both DigitalOcean customers and non-customers. Respondents came from a range of digital industries, with 37% being in the software/Software as a Service, 19% technology consulting, 6% marketing/advertising, 4% eCommerce, and 6% other technology industries.