Loot.tv is an engaging video platform where creators and communities can earn rewards for uploading and interacting with their favorite content. Through Loot.tv, brands receive guaranteed views for their advertisements while viewers are rewarded for watching videos. In return, users are able to redeem their rewards to one of Loot.tv’s rewards partners.

Loot.tv was an evolution of Co-Founders Joshua Verdehem and Ethan Geczi’s original idea, Lootably, which helps apps, websites, and games monetize their traffic through rewarded advertising. While Lootably made deals with intermediaries, Loot.tv is able to speak directly to brands, facilitating partnerships and promoting advertisements on content Loot.tv leases from creators. On Loot.tv, users come to the website and complete surveys, watch videos, download apps, or sign up for free trials to earn rewards.

When Josh and Ethan founded Lootably in 2020, they were using an infrastructure provider that supplied bare metal servers. They found it extremely difficult to get the servers spun up because the provider had to go and physically rack the servers. Lootably could be in a queue to get a server for a week. An influx of users couldn’t happen. They decided moving to the cloud would be the best choice for their business, and DigitalOcean was the solution. They’d discovered DigitalOcean through GitHub Student Pack, a resource that gives students—no matter how much or little technical experience they have—web development tools they need to get started, and found the DigitalOcean platform intuitive, easy to use, and cost-effective for their bootstrapped startup. Being able to click a button and spin up a Droplet instantly made all the difference. This allowed Josh to spend more time doing what he loves—writing code.

“Just by me being a student, Github opened the door to thousands of dollars worth of professional developer tools and services, many of which are traditionally only available to large companies! Having access to the Github Student Developer Pack saved our startup tons of time and money and I absolutely would recommend it to anyone who is eligible for the program.” - Joshua Verdehem, Co-Founder, Loot.tv

Since Josh was already using DigitalOcean for Lootably, it was the natural choice when they founded Loot.tv in early 2021. While the organization was using DigitalOcean for their virtual machines and other infrastructure needs, they originally used a hyperscaler’s storage option. But in some months, Loot.tv’s data transfer exceeds three petabytes. The organization averages 8,000 viewers at any given time. The bandwidth charges from the hyperscaler threatened to put them out of business. The team discovered that Spaces, DigitalOcean’s S3 compatible object storage solution, provides low bandwidth costs that would allow Loot.tv to effectively serve its customers while paying a fraction of the cost for bandwidth that they were paying on hyperscalers.

“Cloud providers love gouging on bandwidth for seemingly no reason. The only reason that Loot.tv can exist is because of the very cheap overage [bandwidth charges] on DigitalOcean Spaces.” - Joshua Verdehem, Co-Founder, Loot.tv

Loot.tv migrated their content to Spaces and took advantage of the built-in content delivery network (CDN) that is provided to customers at no additional cost. Originally, they routed all traffic through a datacenter in Toronto. Now they use DigitalOcean load balancers set up in locations around the world. These load balancers are in turn managed by a global load balancer hosted on Cloudflare. They’ve seen a drastic improvement in load times, going from 600 milliseconds to 100 milliseconds, and experienced revenue increases in each country where they’ve deployed their service. 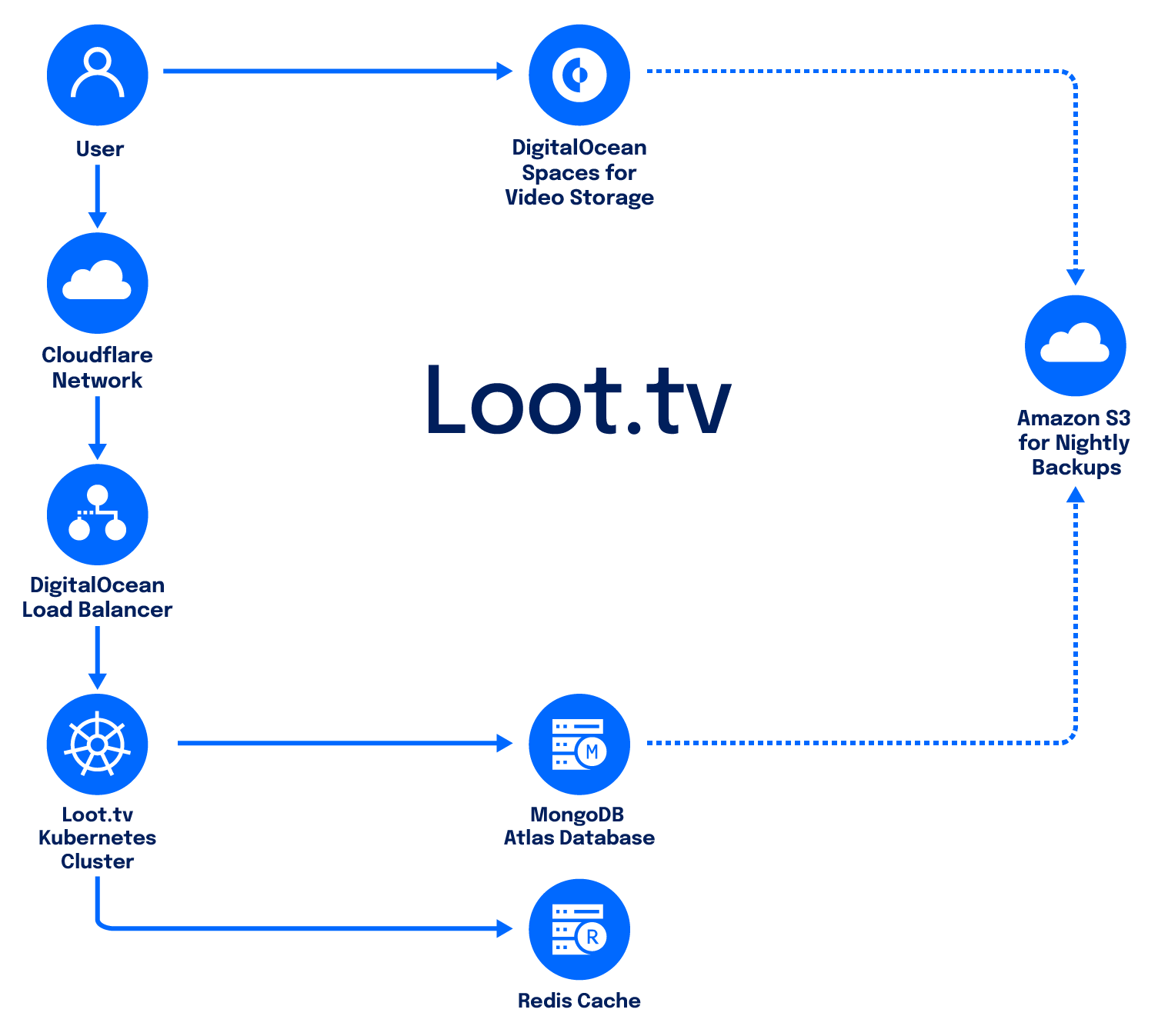 As Josh was architecting Loot.tv, he wanted to ensure the application was easily scalable. Originally, Josh was setting up servers with commands he’d run and then add to the load balancer. This system wasn’t scalable and was difficult to maintain. At one point the organization had twenty different API servers running. If one went down, he’d have to log in through SSH, figure out the problem, and deploy a fix. This didn’t allow for rapid scaling up and down to meet demand and create bottlenecks for the team.

Josh was able to spend a weekend creating his Kubernetes cluster in DigitalOcean’s Managed Kubernetes solution. Since Kubernetes automatically scales up and down to meet demand and is self-healing, Josh doesn’t have to worry about self-managing virtual servers or finding fixes if something goes wrong.

“DigitalOcean Managed Kubernetes has totally changed the way I think about deploying applications. In an ad push, we’d have to know ahead of time to spin up servers and it could take a whole afternoon. Now, I can click a button and it’s done.” - Joshua Verdehem, Co-Founder, Loot.tv

DigitalOcean Managed Kubernetes also supports the automated process of pulling content from YouTube and adding it to the Loot.tv website. The system pulls the videos and performs the encoding needed for adaptive bitrate streaming —converting the videos to various formats and sizes in order to match the various devices and download speeds of their users and then uploads the videos to Spaces where it’s available for the public.

The solid foundation Loot.tv has built with DigitalOcean will allow them to continue to expand. In the last two years, they’ve built a user base of 23,000 active daily users and continue to experience rapid growth. Now, they’re one of the largest rewarded ad networks in the world. And the team doesn’t plan to slow down.