When the cloud calls: how RouteTrust runs its telecommunications PaaS on DigitalOcean

When the cloud calls: how RouteTrust runs its telecommunications PaaS on DigitalOcean

RouteTrust is a state-of-the-art telecommunications platform as a service that processes more than 100 million voice calls per day. Its solutions simplify telecommunications operations and provide actionable insight, while increasing efficiency and profitability. RouteTrust’s platform includes products including a full-featured Class IV softswitch with a robust least cost routing engine; next generation CDR analytics platform, and a suite of tools that simplify toll-free management. RouteTrust serves customers around the world, with regional emphasis in the United States and India.

Amazingly, RouteTrust is mostly bootstrapped, and is a profitable company with a team of under 10 people. They are first to admit that this is a feat that probably would not have been possible without DigitalOcean as their cloud computing platform – and ally.

This is the story of how RouteTrust migrated to DigitalOcean, and how we have grown together.

“We’re a small company, and we monitor our costs very closely. If we were to use AWS for everything, our costs would be around $55,000 more per month than they are with DigitalOcean. We wouldn’t be able to compete in certain products.”

Can a telecom count on the cloud? RouteTrust’s early days with DigitalOcean

When Russell Bierschbach cofounded RouteTrust in 2015, he was uncertain whether he could run its bandwidth-hungry voice over internet protocol (VoIP) system on any cloud computing platform. Would customers experience performance issues? And would the cloud prove too costly? Consequently, Russell and his team spent roughly a million dollars to build out an on-premises data center with a custom-built, performance-optimized network.
While this approach proved viable for RouteTrust’s nascent business, Russell knew he would soon need to scale operations to support additional customers. Traditionally, this would have required raising additional capital in order to procure more servers that his team would then need to install and manage.

Russell was reluctant to exchange equity in his business for additional capital, and subsequently wondered if he really needed to buy more servers. Or could he further bootstrap RouteTrust by renting high-performance virtual machines from a cloud provider? If the cloud worked well enough, Russell could scale RouteTrust profitably – spinning up infrastructure on demand, and charging customers at a rate that would more than cover operational costs.

Russell then worked with others on the RouteTrust team to configure these Droplets. The team deployed all its custom software, which is built on open source technologies like MySQL, MongoDB, Asterisk and OpenSIPs. As RouteTrust began migrating a portion of its live production traffic onto the cloud, it became clear that the performance of Droplets in DigitalOcean was actually superior to that provided by RouteTrust’s own custom-built network.

RouteTrust has since embraced the cloud, and uses DigitalOcean first

Since those early days, RouteTrust has wound down its on-premises operations, and has shifted all its workloads to the cloud.

Here’s how David Shifley, who joined RouteTrust as CTO in 2019, explains their decision to use DigitalOcean:

“We just need reliable compute power and bandwidth with great price-performance. That model doesn’t scale particularly well with AWS and how they price servers and data transfer. DigitalOcean’s Standard Droplets are significantly more powerful than Amazon’s burstable M and R series VMs. Bandwidth on DigitalOcean is much cheaper, too, and we’ve always found DigitalOcean support more personal and responsive. We plan to use DigitalOcean first and AWS for a few select services.”

A look at RouteTrust’s architecture

RouteTrust has worked closely with DigitalOcean’s solutions engineering team, and together we have devised an architecture that allows RouteTrust to run almost all of its platform on DigitalOcean.

RouteTrust has now horizontally scaled its system to utilize hundreds of 4 vCPU, 8GB RAM Standard Droplets. Since each Droplet includes 5TB data transfer, that gives RouteTrust a total bandwidth pool of over 750 TB. This generous amount has proven more than enough to satisfy RouteTrust’s network transfer needs. And with DigitalOcean’s flexible pricing, RouteTrust can scale instances up and down with customer demand; all without locking into onerous contracts.

Here is a visualization of RouteTrust’s architecture on DigitalOcean: 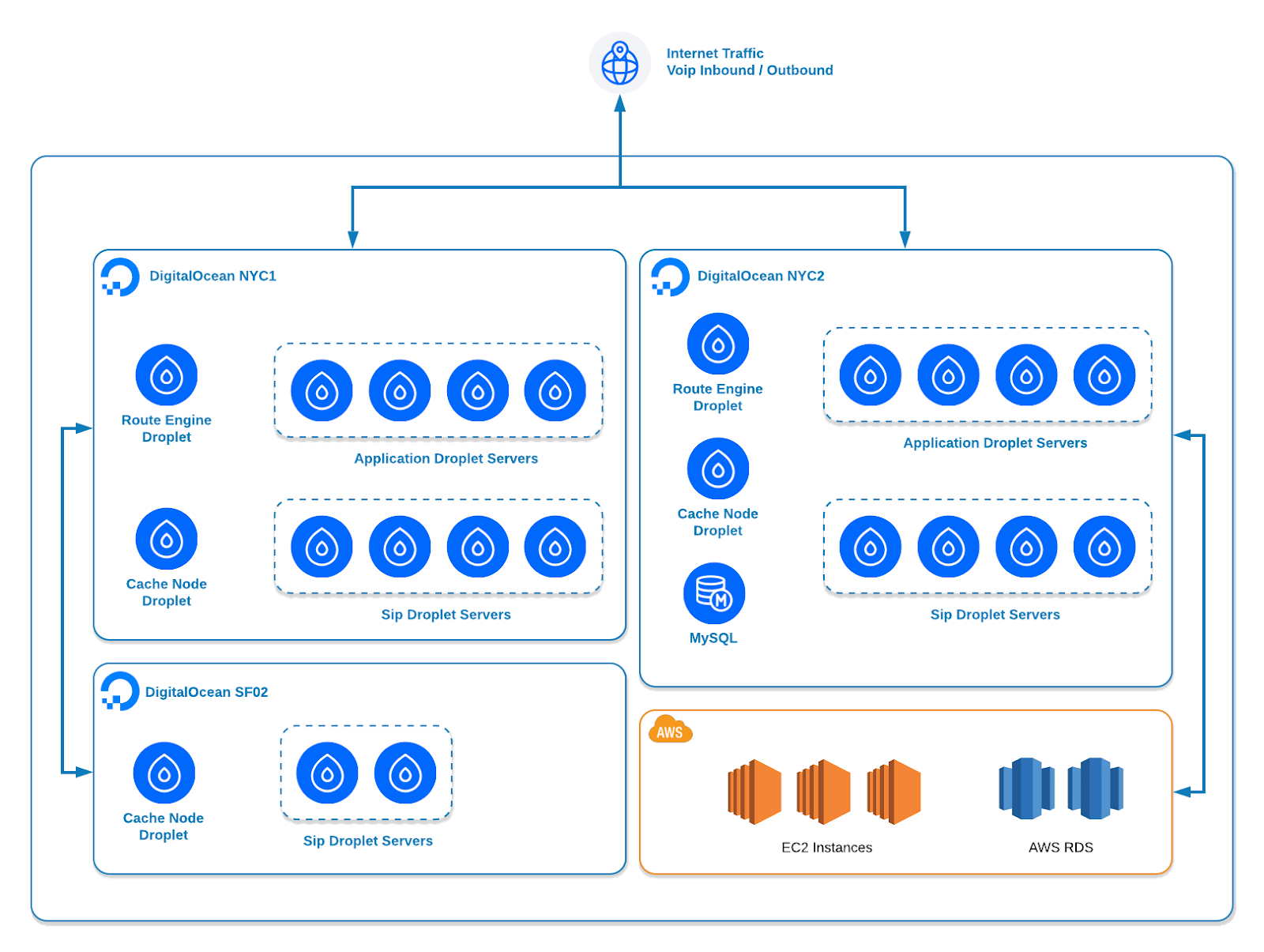 RouteTrust’s customers have taken full advantage of this by creating over 5,000 unique connections to other carriers around the world.

In addition to its VoIP service, RouteTrust also has multiple different web and application servers which run proprietary software. These servers run in multiple data centers so that RouteTrust’s platform is highly available.

The future with DigitalOcean and RouteTrust

At the start of 2020, RouteTrust looked to expand their product offerings with two new products: a next generation data analytics platform for processing, reporting, and storing call detail records (CDRs).

RouteTrust once again looked to DigitalOcean for compute power and storage.
“With our RT/Vue analytics product, our goal is to process up 10,000 CDRs per second. Managed services for data streaming, for example with Kafka, are great for a proof of concept, but once you start running production traffic like that, your costs can really skyrocket.”

DigitalOcean and RouteTrust are committed to working together to achieve shared success.

Interestingly, as part of the architecture that RouteTrust and DigitalOcean devised together, RouteTrust logs customer and call data using AWS’ managed MySQL service. RouteTrust has recently shared with us their excitement at the prospect of migrating this database to DigitalOcean Managed Databases – an effort that, once complete, will save RouteTrust thousands of dollars more each month.

DigitalOcean is proud to have RouteTrust as a valued customer, and we’re excited to continue building our businesses together.