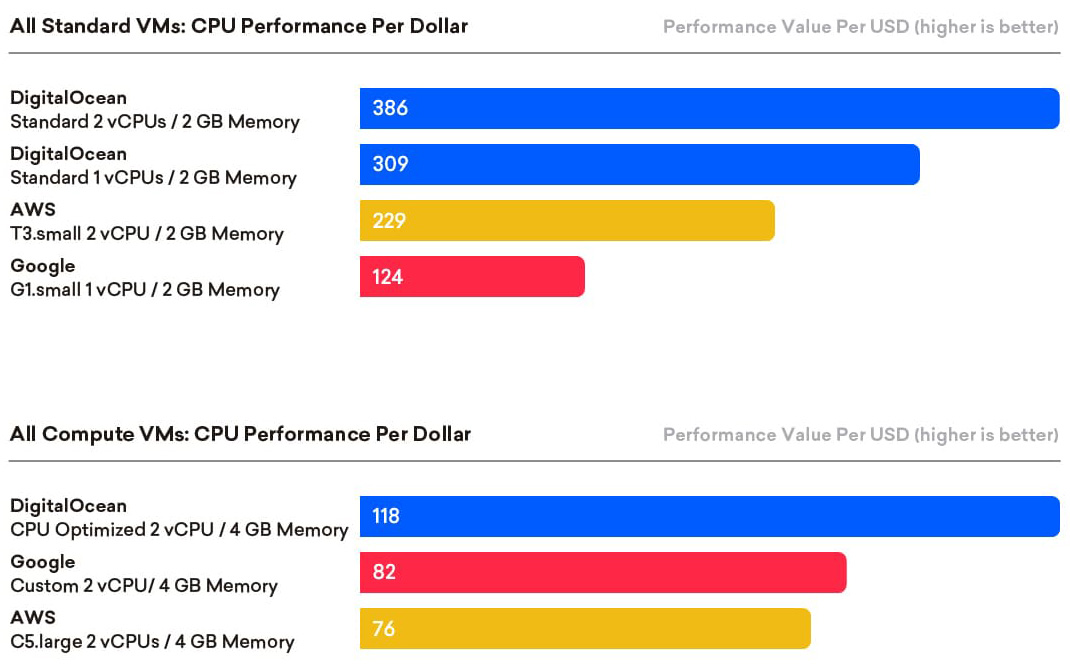 Figure 1 - CPU Performance Per Dollar of all tested VMs

The primary drivers for DigitalOcean’s strong performance were three factors:

Key findings and observations from this analysis are highlighted below, with more detailed analysis following in the body of the report.

Key Findings Observed in This Report

The following summary findings were gleaned from the testing performed by Cloud Spectator during this engagement:

Compute and memory performance were tested using the GeekBench4 test suite. The following highlights emerged from these tests:

Storage performance was tested using the FIO tool to perform a variety of tests. The 4K random read and random write results are summarized below.

Price-Performance, or the value of a given Cloud service, derived by dividing performance by price (compute/memory and storage), is summarized below:

The details of the testing setup, design and methodology along with full results, are explained in the body of the report.

DigitalOcean commissioned Cloud Spectator to assess the performance of virtual machines (VMs) from three different Cloud Service Providers (CSP) or providers: DigitalOcean (DO), Amazon Web Services (AWS), and Google Compute Engine (GCE). Cloud Spectator tested the various VMs from these providers to evaluate the CPU performance, RAM and storage for each provider’s VMs. The purpose of the study was to understand the VM performance between Cloud providers with similarly-sized and classed VMs using standardized and repeatable testing methodology. Performance information for specified basic 1 and 2 vCPU 2GB and compute-optimized 2 vCPU 4GB VMs was gathered using Geekbench4 and FIO benchmarking tools for this analysis. Each VM type was provisioned with four duplicate VMs to limit sampling error. Data was then collected during 100 iteration tests.

Using this proven Cloud sampling and testing methodology, Cloud Spectator evaluated the Cloud services based on price-performance calculations, while detailing specific strengths and weakness of each provider’s VMs based on the objective performance results. Given the inherent variability of Cloud services, these methods are necessary to provide reliable and comparable analyses of Cloud-based infrastructure-as-aService (IaaS) offerings.

Virtual machines (VMs) for this engagement focused on 1 and 2 vCPU VMs. They were grouped and classified as basic 1 vCPU 2GB, basic 2 vCPU 2GB and compute-optimized 2 vCPU 4GB machines. All instances were deployed with a current release of Ubuntu 18.04 from the respective providers. Local SSDs were used for DigitalOcean’s Droplet VMs, while elastic block storage (EBS) general purpose (gp2) block storage was used for AWS, and persistent solid state (SSD) block storage was used with GCE. Basic VMs are targeted for general purpose workloads or application testing, and are configured with 1:2 and 1:1 RAM to vCPU ratios for Basic 1 vCPU and 2 vCPU instances, respectively. Basic instances are configured to share cores with other VMs. Some may “burst” temporarily (AWS T3.small), while others opportunistically use available resources on the parent server, e.g. GCE g1-small, for performance boosts when needed for a particular workload. On the other hand, compute-optimized VMs are configured with dedicated vCPU’s operating at full capacity with a 1:2 vCPU to RAM ratio for more demanding workloads. The VMs selected for this engagement are listed in the tables below:

The test design and methodology used in this analysis are described in the following sections.

The test design and methodology are described below for each of the VM performance dimensions evaluated, as follows: CPU and RAM, and storage random read/write. Synthetic testing was performed on the selected VMs to enable objective comparisons of performance.

CPU and memory testing were conducted with the Geekbench4 benchmarking suite, which allows modern testing scenarios such as floating-point computations, encryption and decryption, as well as image encoding, life-science algorithms and other use cases.

Testing was conducted on specific VM types for each provider. Provider VM configurations may yield different results based on underlying infrastructure, virtualization technology and settings (e.g. shared resources), and other factors. Furthermore, factors such as user contention or physical hardware malfunctions can also cause suboptimal performance. Cloud Spectator therefore provisioned multiple VMs with the same configuration to better sample the underlying hardware and enabling technology, as well as improve testing accuracy and limit the effects of underlying environmental variables.

The VMs selected for this engagement were generally-available specified offerings from the various providers. While better performance can often be attained from providers when additional features or support services are purchased, the selected VMs used in Cloud Spectator’s testing do not leverage such value-added services. This helps provide data and test results that are indicative of real-world customer choices from the tested CSPs.

Four duplicate VMs were deployed during testing to minimize sources of error prevalent in a Cloud hosting environment. The most notable challenge is the Noisy Neighbor Effect. Testing duplicate VMs mitigates most non-specific errors that could be attributed to a singular parent instance or storage volume. By minimizing possible sources of error, more accurate and precise performance samples can be collected during testing.

Generally, Basic, burstable or smaller VMs tend to achieve higher price-performance values than compute-optimized or larger VMs with static vCPU allocations. Larger VMs with specifically provisioned resources are typically used for more large production use cases, and therefore have higher prices. Thus, this evaluation was limited to comparable size categories to illustrate the differences between these types of machines.

Multi-core CPU test averages tend to display large differences based on vCPU count, as opposed to singlecore tests. The results section below provides an overview of the single-core performance, while multi-core performance is used for price-performance analysis.

CPU Performance for all VMs

The chart below depicts the CPU single-core performance of all VMs evaluated in this study. The GeekBench4 single-core score represents the processing speed of one CPU (or core) processing a single stream of instructions rather than multiple parallel streams per core. Many consumer applications, although they are multithreaded, rarely utilize more than one CPU thread at a time. Thus, the single-core CPU test is a reasonable real world test for typical consumer workloads.

In most production scenarios, all vCPUs will be utilized in multi-core VMs if a workload or application is able to exploit them. Though not discussed in detail, single-core scores provide a universal performance baseline that is useful when comparing multi-core performance.

The chart below depicts the CPU multi-core performance of all VMs covered in this study. As core count, or vCPU quantity, increases VMs generally produce higher scores as depicted in the graph below. Computeoptimized machines are shown below with solid colored bars, while basic VMs are displayed with pattern filled bars.

In the next section, the analysis will focus on Cloud storage performance.

Storage performance results are summarized in the sections below. The testing methodology for storage ensured that all machines were tested for several thousand iterations using FIO with a block size of 4KB, queue depth of 32 running at 1 thread per vCPU for random read and write.

Storage Performance for ALL VMs (Read)

Below, storage random read results for all providers and VM types are displayed. Summary details are provided below. The chart displays compute-optimized VMs as solid colors while Basic VMs are pattern filled.

VM size, as described by vCPU count alone has some role in storage random read performance in this test though RAM has a much greater affect as can be seen from the results above with 2 vCPU 2GB instances vs compute-optimized 2CPU 4GB VMs from the same providers. Below, random write results are presented.

Storage Performance for ALL VMs (Write)

This section focuses on the compute and memory price-performance, or value. The values shown are linear and unweighted, using the multi-core performance scores (figures 10.1) and monthly price (tables 6.1 - 6.3). Higher scores indicate higher value for each USD spent by the tested VMs.

The chart below summarizes all VM sizes evaluated for price-performance. Compute-optimized VMs are found in solid colors, while Basic VMs are shown with a pattern fill.

In summary, DigitalOcean VMs provide excellent value across all sizes and both VM groups (Basic and Compute-Optimized), with Basic class machines having a price-performance advantage over the computeoptimized machines. With the lowest prices and competitive CPU scores, DigitalOcean achieved superior performance scores, even against some of the newest hyperscale offerings. The following section details storage price-performance.

This section focuses on storage price-performance value. Storage performance can be a major bottleneck for certain applications, and often storage pricing can become a budgeting challenge for enterprises. The values shown in the sections below are linear and unweighted, using the average performance scores for random read (Figure 11.1) and random write (Figure 12.1), as well as monthly prices (tables 6.1-6.3). Higher scores indicate a better price-performance value per USD spent compared to competing VMs in the same size category.

In the chart below, price-performance is compared for the specified VMs based on random read speed. This is most useful when considering read-intensive use-cases. Summary observations are provided below.

Overall, DigitalOcean’s offerings were dominant in read speeds, as their local storage provided a significant edge over the block storage offered by other tested providers.

Write speed, no matter the drive type or configuration, has always been a technology challenge. The following summary observations were gleaned from the analysis. Compute-optimized VMs are displayed in solid colors, while the Basic VMs are shown in pattern fills.

In summary, DigitalOcean provides excellent storage price-performance for both read and write for all VM configurations tested, regardless of machine classification or size.

Raw performance testing of CPU and memory demonstrated that DigitalOcean’s Basic 2CPU 2GB offering is a stand out configuration, even when compared with the T3.small, Amazon’s most recent series released on August 21st, 2018. In the 2 vCPU compute-optimized category, Amazon’s current VM, the C5.large, provided competitive results, although at 38% higher cost. Both AWS and DigitalOcean offerings surpassed Google’s custom Skylake VM by a margin greater than 20%. While DigitalOcean’s 1vCPU machine was the leading VM, it was challenged by the opportunistic, burstable GCE g1-small in performance. However, the DigitalOcean VM exhibits far less performance variability, which makes it an advantageous choice for small workloads with known requirements.

While Google provided consistent performance for both read and write operations, Amazon’s EBS performance was approximately 10% of rival offerings during write tests. As noted, Amazon’s Elastic Block Storage has a “burst” feature, which was demonstrated in the pointedly high variation seen in the test results. The high-performance variability can be remedied by purchasing larger EBS volumes with higher base IOPs and longer burst periods. Higher capacity EBS volumes, however, will add substantially to the price of small machines.

Talk with a solutions engineer

Have questions about migrating from another cloud provider or what your total costs might end up looking like on DigitalOcean once you start scaling? You can schedule a meeting with our team of experts who can help answer any questions you have before you get started.

Talk with an expert