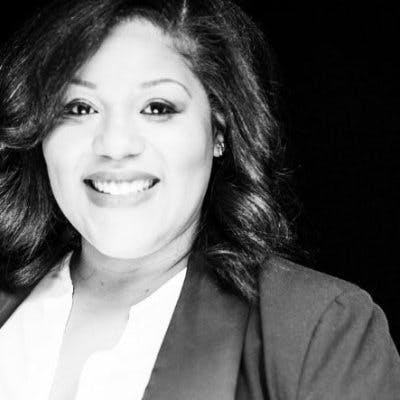 Seven years ago, DigitalOcean created Hacktoberfest to rally our global community toward learning and participating in the open source ecosystem. Alongside the development of our own open source tools and the sponsorship and contributions to other tools, Hacktoberfest became a hallmark initiative every October to invest in the thriving open source community.

Hacktoberfest 2020 wouldn’t have been possible without our amazing partners. First, a huge thank you goes to Intel and DEV for their awesome support. We also want to thank our other partners – Vonage, Circle CI, JetBrains, and GitHub – for all of the amazing work they did. And last but certainly not least, we’d like to thank all of the community partners who chipped in so meaningfully.

At the end of the day, Hacktoberfest is simply a series of human experiences that can make a positive impact. Each person who participates in the program has a unique story to tell about where they came from and where they went as a result of Hacktoberfest. Here are just a few of the stories we’ve heard following Hacktoberfest 2020.

Lois Codes joined Hacktoberfest last year and shares a few learnings for developers that she’s personally benefited from when contributing to open source.

Shahed Nasser went from contributing to open source to building a project and maintaining her own repository. Daunting as it was, Nasser knew that the best way to encourage more open source contributions was to create a project new beginners could learn from and grow with.

Kaylee Llewellyn dipped her toes into Hacktoberfest for the first time this year and had an awesome experience that boosted her confidence and skill set.

Matt S, a two-time Hacktoberfest participant, open-sourced a passion project that he built from scratch. Wanting to get a feel for the maintainer role, he was blown away by the number of contributions received this year.

We are deeply inspired by all of your stories, and with your permission, we would like to share them more broadly. If you’re interested in sharing your story, please submit it in the Hacktoberfest stories form.

Hacktoberfest by the numbers

When we combine all of the stories from Hacktoberfest, we get some impressive numbers that showcase the full experience: You all came together at this challenging time and made such a positive impact. It’s incredible to see how many people from around the globe take part in this celebration. And we’re excited to share the data with you.

2020 was our first year making a monetary investment in lowering the climate impact of the Hacktoberfest program. As of this moment, 3% of participants have opted into the ‘Pick trees, not tees” option and 400 people have planted their own trees in the Hacktoberfest Forest. So far, we’ve donated $3,728 to the effort and have also offset 500 tons of carbon from shipping tees by planting 5000 trees. Read more about Hacktoberfest’s worldwide impact on the Kotis blog, our awesome swag partner. 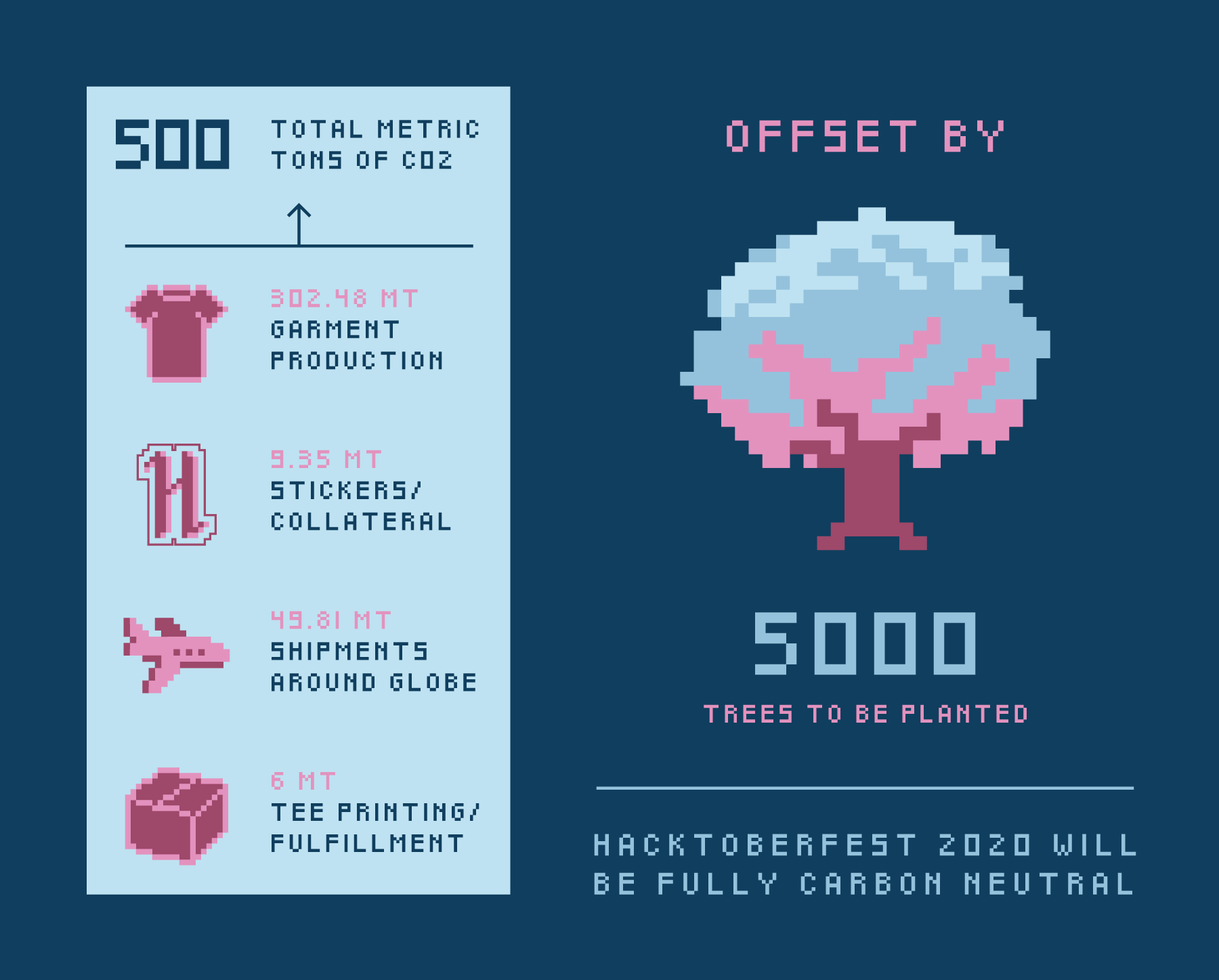 Many varying repositories participated, representing a multitude of programming languages, sizes, and levels of engagement. When we looked at the breakdown by language, here is what we saw.

When it came to the engagement, within the repositories that participated in Hacktoberfest: 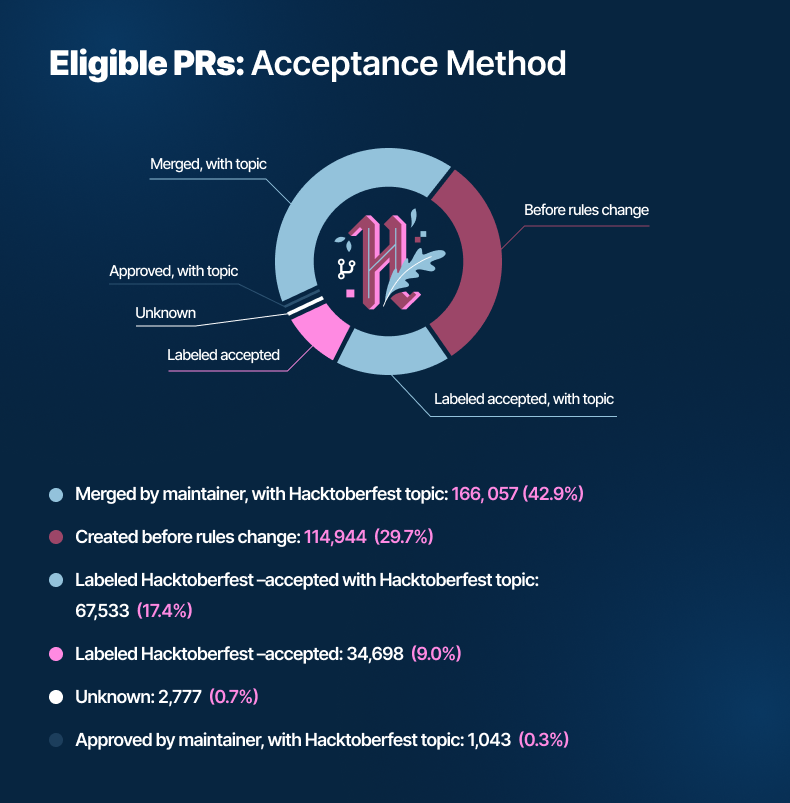 The numbers are in, and this Hacktoberfest was the biggest one yet. In total, 169,886 people signed up to participate and 66,798 earned a chance to pick a tree or tee. Based on the location field we added this year, we are now able to see that an estimated 140 total countries were represented. Participants were also very socially active this year, mentioning #hacktoberfest 115k times and reaching 272 million people. Here is a breakdown of the top countries, excluding the U.S. and India.

Every event this year was 100% virtual, and the event kit became the one-stop-shop for all your virtual event needs. We also leveraged Major League Hacking’s platform to unify the event experiences and make it seamless to get folks to your event. There were 1,521 event organizers in total who signed up and organized 720 events in 76 countries. However, participants represented over 121 countries in the events organized. Here were the top countries with events.

From an attendance perspective, we saw 21,826 people sign up to attend an event. To facilitate online connections, we opened up a Hacktoberfest Discord server, where 20,000 members joined, along with active Hacktoberfest partners.

Learning and growing together

From the very first day of Hacktoberfest, we knew that 2020 was not going to be an ordinary celebration. It was a year of many firsts, with the most notable difference being that projects had to opt-in in order to participate in Hacktoberfest. It was encouraging to see the total number of projects on GitHub with the ‘hacktoberfest’ topic go from around 2,000 on October 3 to around 63,000 on October 31.

Over the seven years of Hacktoberfest, the program has evolved with small but mighty tweaks that have significantly improved the experience. However, we learned that we were still not addressing the apex of critical mass and scale for Hacktoberfest participation with maintainers. That changed this year because the quantity of poor-quality contributions between September 30 and October 3 surpassed anything we (or even GitHub) had seen before. We knew that in order to have a positive month-long engagement that was meaningful and in the spirit of Hacktobefest’s original goal, we had to act quickly to make significant changes to the program and process. We had no other choice but to make sizable changes at that moment, and so we did.

We looked to take in all the key maintainer perspectives after significant deliberation from the team and partner consultation, after which we made the program opt-in only, requiring that pull requests be either merged or labeled ‘accepted’ in order to qualify. Deepening our commitment to listening to the community and maintainer partnership in the Hacktoberfest initiative, we also held 20 roundtable sessions with maintainers from all over the world. More than 65% of the maintainers who signed up attended and we had powerful conversations about the clear gaps the program had not accounted for, especially as it pertains to the maintainer experience. We’d like to express our sincere gratitude to all of you who attended.

Where DO we go from here?

During a year when there has been so much change, even within Hacktoberfest, we are hopeful that next year will bring more quality connections and contributions to the open source community. That’s why we’re going to do our part to critically examine the program and make the decisions that optimize for both maintainer and contributor experience. Our commitment is to continually improve the experience for the members of this global community by always listening to our supporters and our critics for the betterment of the experience we share.

Once again, congratulations on another successful year, adding to your Hacktoberfest tee collection, improving your open source knowledge, and giving back to the community (and the planet) with a tree donation. We hope you’ll share your experience and inspire others on social media by using #hacktoberfest and tagging @DigitalOcean.

When you’ll receive your swag

If you have selected a tee as your Hacktoberfest reward, you should expect an email confirmation regarding your shipment over the coming weeks. Once your swag has shipped, you’ll receive tracking information. Please be patient; delivery may take between 8-12 weeks.

Continue contributing to the open source community by taking our latest Currents survey.

Lastly, we just released our latest Currents survey, which focuses on the top trends the open source has faced within the last year. This has been a unique time for all of us and we’re curious how it has affected open source participation, open source technologies, and the global open source communities.

After launching Hub for Good, we were given a unique lens into how the open source community is using and contributing to open source software in light of recent events. To say we’ve been inspired by this is an understatement. But we want to hear our communities’ perspectives. If you have a few minutes and would like to share your insights for our upcoming Currents research report, we’d love to hear from you. As a thank you for your time, you can opt-in after taking the survey to receive a limited-edition open source “Sammy Shark” sticker or plant a tree in our DigitalOcean Forest.