How to Create a High Availability Setup with Pacemaker, Corosync and Floating IPs on CentOS 7

Corosync is an open source cluster engine used to implement high availability within applications. Commonly referred to as a messaging layer, Corosync provides a cluster membership and closed communication model for creating replicated state machines, on top of which cluster resource managers like Pacemaker can run. Corosync can be seen as the underlying system that connects the cluster nodes together, while Pacemaker monitors the cluster and takes action in the event of a failure.

This tutorial will demonstrate how to use Corosync and Pacemaker to create a high availability (HA) infrastructure on DigitalOcean with CentOS 7 servers and Floating IPs. To facilitate the process of setting up and managing the cluster nodes, we are going to use PCS, a command line interface that interacts with both Corosync and Pacemaker. ##Prerequisites

In order to follow this guide, you will need:

When creating these Droplets, use descriptive hostnames to uniquely identify them. For this tutorial, we will refer to these Droplets as primary and secondary.

When you are ready to move on, make sure you are logged into both of your servers with your sudo user.

To speed things up, we are going to use a simple shell script that installs Nginx and sets up a basic web page containing information about that specific server. This way we can easily identify which server is currently active in our Floating IP setup. The script uses DigitalOcean’s Metadata service to fetch the Droplet’s IP address and hostname.

In order to execute the script, run the following commands on both servers:

After the script is finished running, accessing either Droplet via its public IP address from a browser should give you a basic web page showing the Droplet’s hostname and IP address.

In order to reduce this tutorial’s complexity, we will be using simple web servers as cluster nodes. In a production environment, the nodes would typically be configured to act as redundant load balancers. For more information about load balancers, check out our Introduction to HAProxy and Load Balancing Concepts guide.

##Step 2 — Create and Assign Floating IP The first step is to create a Floating IP and assign it to the primary server. In the DigitalOcean Control Panel, click Networking in the top menu, then Floating IPs in the side menu. 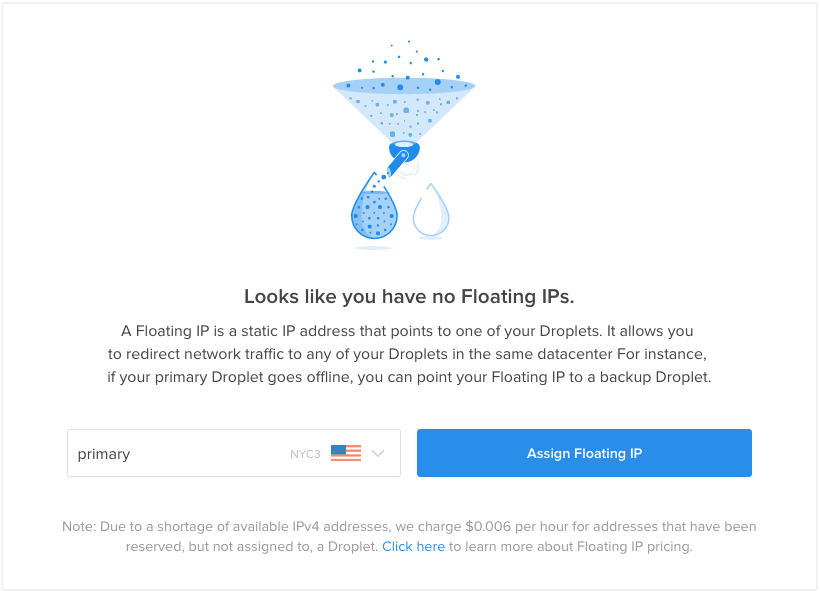 Select your primary server and click on the “Assign Floating IP” button. After the Floating IP has been assigned, check that you can reach the primary Droplet by accessing the Floating IP address from your browser:

You should see the index page of your primary Droplet. ##Step 3 — Create IP Reassignment Script In this step, we’ll demonstrate how the DigitalOcean API can be used to reassign a Floating IP to another Droplet. Later on, we will configure Pacemaker to execute this script when the cluster detects a failure in one of the nodes.

For our example, we are going to use a basic Python script that takes a Floating IP address and a Droplet ID as arguments in order to assign the Floating IP to the given Droplet. The Droplet’s ID can be fetched from within the Droplet itself using the Metadata service.

Let’s start by downloading the assign-ip script and making it executable. Feel free to review the contents of the script before downloading it.

The following two commands should be executed on both servers (primary and secondary):

The assign-ip script requires the following information in order to be executed:

###Testing the IP Reassignment Script To monitor the IP reassignment taking place, we can use a curl command to access the Floating IP address in a loop, with an interval of 1 second between each request.

Open a new local terminal and run the following command, making sure to replace floating_IP_address with your actual Floating IP address:

This command will keep running in the active terminal until interrupted with a CTRL+C. It simply fetches the web page hosted by the server that your Floating IP is currently assigned to. The output should look like this:

Now, let’s run the assign-ip script to reassign the Floating IP to the secondary droplet. We will use DigitalOcean’s Metadata service to fetch the current Droplet ID and use it as an argument to the script. Fetching the Droplet’s ID from the Metadata service can be done with:

Where 169.254.169.254 is a static IP address used by the Metadata service, and therefore should not be modified. This information is only available from within the Droplet itself.

Before we can execute the script, we need to set the DO_TOKEN environment variable containing the DigitalOcean API token. Run the following command from the secondary server, and don’t forget to replace your_api_token with your read/write Personal Access Token to the DigitalOcean API:

Still on the secondary server, run the assign-ip script replacing floating_IP_address with your Floating IP address:

By monitoring the output produced by the curl command on your local terminal, you will notice that the Floating IP will change its assigned IP address and start pointing to the secondary Droplet after a few seconds:

You can also access the Floating IP address from your browser. You should get a page showing the secondary Droplet information. This means that the reassignment script worked as expected.

To reassign the Floating IP back to the primary server, repeat the 2-step process but this time from the primary Droplet:

Install the software packages on both servers:

The PCS utility creates a new system user during installation, named hacluster, with a disabled password. We need to define a password for this user on both servers. This will enable PCS to perform tasks such as synchronizing the Corosync configuration on multiple nodes, as well as starting and stopping the cluster.

On both servers, run:

You should use the same password on both servers. We are going to use this password to configure the cluster in the next step.

The user hacluster has no interactive shell or home directory associated with its account, which means it’s not possible to log into the server using its credentials.

##Step 5 — Set Up the Cluster Now that we have Corosync, Pacemaker and PCS installed on both servers, we can set up the cluster. ###Enabling and Starting PCS To enable and start the PCS daemon, run the following on both servers:

###Obtaining the Private Network IP Address for Each Node For improved network performance and security, the nodes should be connected using the private network. The easiest way to obtain the Droplet’s private network IP address is via the Metadata service. On each server, run the following command:

This command will simply output the private network IP address of the Droplet you’re logged in. You can also find this information on your Droplet’s page at the DigitalOcean Control Panel (under the Settings tab).

This will generate a new configuration file located at /etc/corosync/corosync.conf based on the parameters provided to the pcs cluster setup command. We used webcluster as the cluster name in this example, but you can use the name of your choice. ###Starting the Cluster To start the cluster you just set up, run the following command from the primary server:

You can now confirm that both nodes joined the cluster by running the following command on any of the servers:

To get more information about the current status of the cluster, you can run:

The output should be similar to this:

Now you can enable the corosync and pacemaker services to make sure they will start when the system boots. Run the following on both servers:

###Disabling STONITH STONITH (Shoot The Other Node In The Head) is a fencing technique intended to prevent data corruption caused by faulty nodes in a cluster that are unresponsive but still accessing application data. Because its configuration depends on a number of factors that are out of scope for this guide, we are going to disable STONITH in our cluster setup.

To disable STONITH, run the following command on one of the Droplets, either primary or secondary:

We will create a new OCF resource agent to manage the assign-ip service on both servers.

First, create the directory that will contain the resource agent. The directory name will be used by Pacemaker as an identifier for this custom agent. Run the following on both servers:

Next, download the FloatIP resource agent script and place it in the newly created directory, on both servers:

Now make the script executable with the following command on both servers:

We still need to register the resource agent within the cluster, using the PCS utility. The following command should be executed from one of the nodes (don’t forget to replace your_api_token with your DigitalOcean API token and floating_IP_address with your actual Floating IP address):

The resource should now be registered and active in the cluster. You can check the registered resources from any of the nodes with the pcs status command:

##Step 7 — Test Failover Your cluster should now be ready to handle a node failure. A simple way to test failover is to restart the server that is currently active in your Floating IP setup. If you’ve followed all steps in this tutorial, this should be the primary server.

Again, let’s monitor the IP reassignment by using a curl command in a loop. From a local terminal, run:

From the primary server, run a reboot command:

After a few moments, the primary server should become unavailable. This will cause the secondary server to take over as the active node. You should see output similar to this in your local terminal running curl:

The “Connection refused” error happens when the request is made right before or at the same time when the IP reassignment is taking place. It may or may not show up in the output.

If you want to point the Floating IP back to the primary node while also testing failover on the secondary node, just repeat the process but this time from the secondary Droplet:

In this guide, we saw how Floating IPs can be used together with Corosync, Pacemaker and PCS to create a highly available web server environment on CentOS 7 servers. We used a rather simple infrastructure to demonstrate the usage of Floating IPs, but this setup can be scaled to implement high availability at any level of your application stack.

Ask a questionSearch for more help
Was this helpful?
3 Comments
Login to Comment
Stephane Chapdelaine • January 25, 2018

There is a typo in step 6 command example. You need to remove params from the command otherwise it will not work.

I had the error “Unable to communicate with IP_…” when I used the pcs cluster auth command.