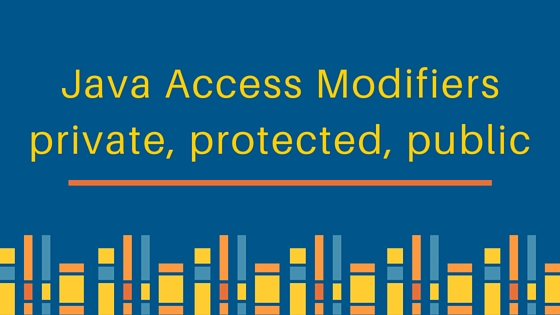 We can have all the four access modifiers for class member variables and methods. However, member access modifier rules get applied after the class level access rules. For example, if a class is having default access then it will not be visible in other packages and hence methods and variables of the class will also be not visible. We will look into each of them separately and then we will show the java access modifiers usage with a simple program.

If a class member is “public” then it can be accessed from anywhere. The member variable or method is accessed globally. This is the simplest way to provide access to class members. However, we should take care of using this keyword with class variables otherwise anybody can change the values. Usually, class variables are kept as private and getter-setter methods are provided to work with them.

If a class member doesn’t have any access modifier specified, then it’s treated with default access. The access rules are similar to classes and the class member with default access will be accessible to the classes in the same package only. This access is more restricted than public and protected but less restricted than private. (Least Accessible) private < default < protected < public (Most Accessible) The below table summarise above access modifiers with respect to different classes in the same package or other packages and subclasses. 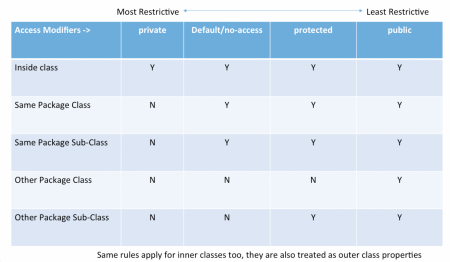 Let’s write some simple classes where we will see the java access modifiers in action. TestA.java

Note that TestA class has default access and the private class method is accessible to all other parts of the same class. TestB.java

Since TestE class is a subclass of TestB, we can access TestB protected members through child class TestE. If we try to access the superclass protected method directly, we will get a compile-time error. That’s all for the java access modifiers, it’s simple to understand. Just don’t confuse with the default and protected access. An easy way to remember is that default access is more restricted than protected and protected members are accessible in subclasses. Recently I made a video to explain java access modifiers in detail, you can watch it below on YouTube. https://www.youtube.com/watch?v=QKjnbC3UBtY

Ask a questionSearch for more help
Was this helpful?
JournalDev • November 30, 2019

protected acces specifier explained incorrect. protected data member or method can be accessed by child class which is present in different package only with child reference and not parent reference.

In TestE.java, what if we had tried to acess members of Test A? Would we have got the error at the import statement itself because of the fact that TestA sits in another package.

Hi pankaj, Is there any article do you have to learn access modifiers in deep.

Informative and insightful article! As java beginner i have been looking for this ’ Java access modifiers’ concept in detail and here i have found it well explained and understanding with examples. Thanks a lot for sharing this, will be looking forward to read more from you!

Hi Nitish, you says about access modifier about default access level its correct only if you will try to access default method from subclass of same package it will be accessible but outside the package you can’t .

Hi, There seems a mistake in access modifier image content. Details about protected and default access modifier is wrong. Please refer to https://docs.oracle.com/javase/tutorial/java/javaOO/accesscontrol.html for more details.

“We can have only one “public” class in a source file and file name should be same as the public class name” Can you please elaborate it… if we don’t do this, will get a compilation error…why this restriction is imposed??