The myCast platform allows fans to speculatively select who should play characters in their favorite stories through proposing actors, commenting on other individuals’ ideas, and voting for their favorite suggestions. The idea of “fan casting”—fans of a story pitching their ideas for which actors should play the characters in film adaptations—is an increasingly popular online activity, with various platforms and social media accounts garnering hundreds of thousands of followers dedicated to this hypothetical casting. 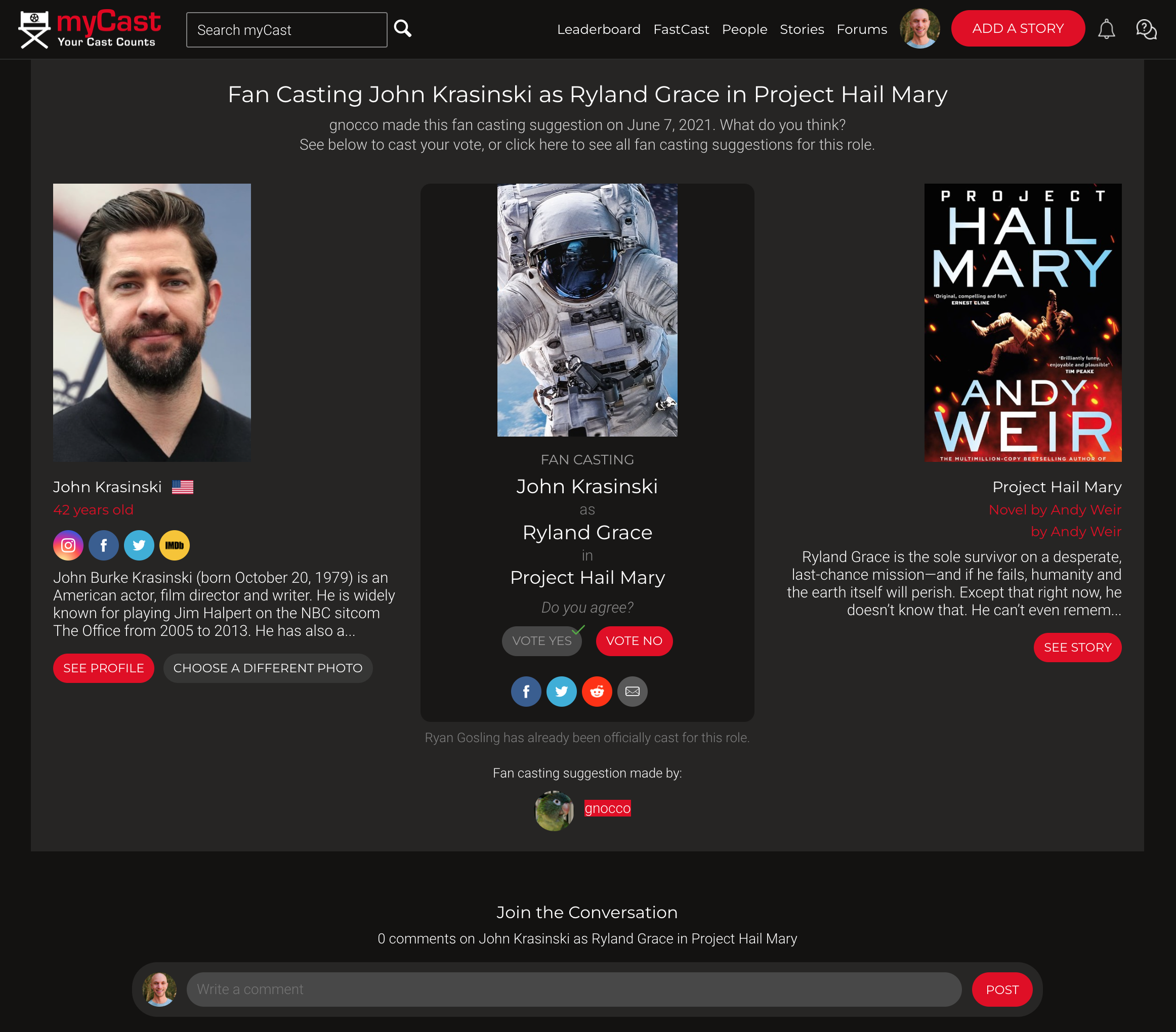 myCast began as a passion project for founder Billy Swift after a site he enjoyed with a similar concept shut down. Fan casting is fun for many people, and he wanted to find a way to serve this online community. Swift is a web developer without much experience building and maintaining backend infrastructure. He also has a full-time career, meaning he had limited hours to dedicate to his project. Although he knew how to build the web application he envisioned, he needed a cloud provider that would give him the ability to maintain his backend infrastructure himself even with his minimal time and server-side experience.

Simple solutions for a growing business

DigitalOcean’s simple offerings that are easy to use and understand, along with its reasonable price point that allows rapid scaling within a limited budget, appealed to Swift as he researched hosting options for his web application. Swift built his platform on DigitalOcean’s Droplets and launched it in 2017. Over the last few years, the site has seen successful organic growth. The myCast team joined DigitalOcean’s Hatch program in 2019 when it was searching for ways to scale rapidly at a reasonable cost. The Hatch program helps global startups grow and scale their businesses through infrastructure credits, training, and support. With the additional support they received through Hatch, the myCast team was able to sustainably scale to meet the demands of their customers.

Now, the myCast team consists of Swift and a few other individuals who all work on the project in their spare time. Swift is the only technical contributor, with the other individuals focused on content, marketing, and design. They received no startup funding and bootstrapped the project until receiving an investment in 2020 that allowed the team to further develop the application and add new features to benefit users. The team has been working to monetize the site through ad revenue and hopes to continue to build the user base and grow their organic traffic. What began as a small project with a handful of patrons has grown to an online community now serving over 100,000 users per month.

“It’s been great to grow together with DigitalOcean,” said Swift. “It’s fun to see the new features coming from the DigitalOcean team and to be able to use them to make things easier for us.”

Server maintenance gets even easier with DigitalOcean’s App Platform

“I don’t know much about maintaining servers, so the App Platform made it a lot easier to deploy and manage, and it saves me time from having to monitor my own Droplets and deploy to multiple places. It’s nice to push changes to Github and know it’s building and deploying in the background. It’s easy to scale up and down and great not to worry about the server-side maintenance.” - Billy Swift, Founder, myCast.io

The myCast platform handles hundreds of thousands of web requests per day from users around the world. With the insights dashboard provided by App Platform, Swift can quickly and easily monitor the application’s performance and ensure a good experience for its end-users. The time savings and ease of use that App Platform provides are proving invaluable to the myCast team as they work to grow the application into a sustainable business.

Having more time to focus on developing the application is key to myCast’s future success. The time saved no longer manually maintaining server-side infrastructure can be reallocated to developing new features and platform updates for the myCast application. As the user base continues to grow and new features are added, further monetization of the platform is sure to follow, helping the myCast team move one step further toward their goal of becoming the go-to destination for online fan casting.