How To Install and Use Composer on Ubuntu 22.04

By Erika Heidi and Jamon Camisso

Not using Ubuntu 22.04?Choose a different version or distribution.

Composer is a popular dependency management tool for PHP, created mainly to facilitate installation and updates for project dependencies. It will check which other packages a specific project depends on and install them for you, using the appropriate versions according to the project requirements. Composer is also commonly used to bootstrap new projects based on popular PHP frameworks, such as Symfony and Laravel.

In this tutorial, you’ll install and get started with Composer on an Ubuntu 22.04 system.

In order to follow this guide, you will need access to an Ubuntu 22.04 server as a non-root sudo user, and a firewall enabled on your server. To set this up, you can follow our initial server setup guide for Ubuntu 22.04.

In addition to dependencies that should be already included within your Ubuntu 22.04 system, such as git and curl, Composer requires php-cli in order to execute PHP scripts in the command line, and unzip to extract zipped archives. We’ll install these dependencies now.

Next, run the following command to install the required packages:

You will be prompted to confirm installation by typing Y and then ENTER.

Once the prerequisites are installed, you can proceed to installing Composer.

Composer provides an installer script written in PHP. We’ll download it, verify that it’s not corrupted, and then use it to install Composer.

Make sure you’re in your home directory, then retrieve the installer using curl:

Next, we’ll verify that the downloaded installer matches the SHA-384 hash for the latest installer found on the Composer Public Keys / Signatures page. To facilitate the verification step, you can use the following command to programmatically obtain the latest hash from the Composer page and store it in a shell variable:

If you want to verify the obtained value, you can run:

Now execute the following PHP code, as provided in the Composer download page, to verify that the installation script is safe to run:

If the output says Installer corrupt, you’ll need to download the installation script again and double check that you’re using the correct hash. Then, repeat the verification process. When you have a verified installer, you can continue.

To install composer globally, use the following command which will download and install Composer as a system-wide command named composer, under /usr/local/bin:

You’ll see output similar to this:

To test your installation, run:

This verifies that Composer was successfully installed on your system and is available system-wide.

Note: If you prefer to have separate Composer executables for each project you host on this server, you can install it locally, on a per-project basis. This method is also useful when your system user doesn’t have permission to install software system-wide.

To do this, use the command php /tmp/composer-setup.php. This will generate a composer.phar file in your current directory, which can be executed with php composer.phar.

PHP projects often depend on external libraries, and managing those dependencies and their versions can be tricky. Composer solves that problem by keeping track of project versions and dependencies, while also facilitating the process of finding, installing, and updating packages that are required by a project.

You don’t need to create this file manually - it’s common to run into syntax errors when you do so. Composer offers an interactive way to create a new composer.json file based on the user’s input, which is a good choice if you plan on sharing your project later as a public package on Packagist. Composer also auto-generates a barebones composer.json file when you run a composer require command to include a dependency in a newly created project.

The process of using Composer to install a package as dependency in a project involves the following steps:

Let’s try this out with a demo application.

The goal of this application is to transform a given sentence into a URL-friendly string - a slug. This is commonly used to convert page titles to URL paths (like the final portion of the URL for this tutorial).

Let’s start by creating a directory for our project. We’ll call it slugify:

Although not required, you could now run a composer init command to create a detailed composer.json file for your project. Because our project’s only objective is to demonstrate how to install dependencies with Composer, we’ll use a simpler composer.json file that will be auto-generated when we require our first package.

Now it’s time to search Packagist.org for a package that can help us generate slugs. If you search for the term “slug” on Packagist, you’ll get a result similar to this: 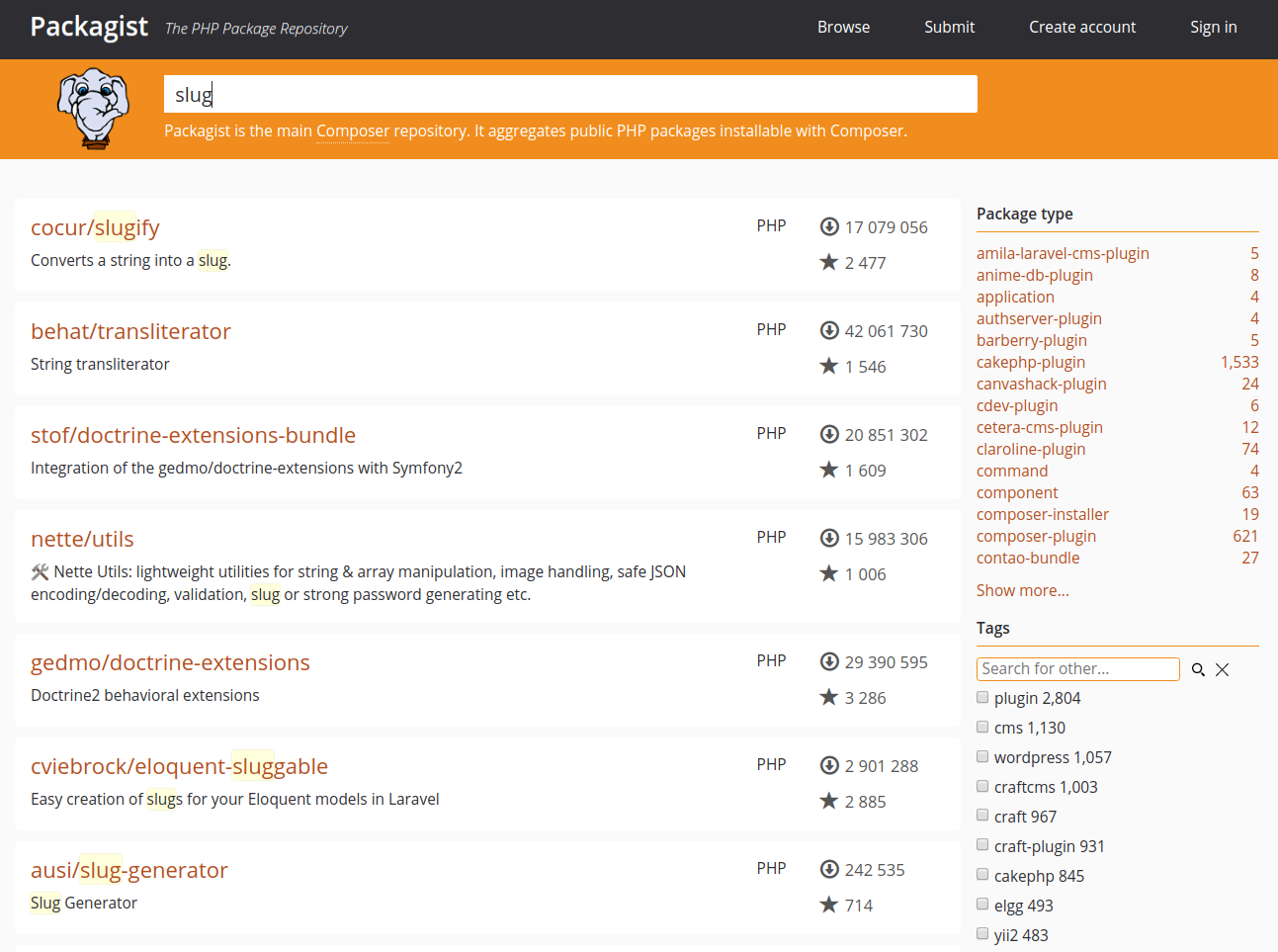 You’ll see two numbers on the right side of each package in the list. The number on the top represents how many times the package was installed via Composer, and the number on the bottom shows how many times a package was starred on GitHub. Generally speaking, packages with more installations and more stars tend to be more stable, since so many people are using them. It’s also important to check the package description for relevance to make sure it’s what you need.

We need a string-to-slug converter. From the search results, the package cocur/slugify, which appears as the first result in that page, seems to be a good match, with a reasonable amount of installations and stars.

Packages on Packagist have a vendor name and a package name. Each package has a unique identifier (a namespace) in the same format GitHub uses for its repositories: vendor/package. The library we want to install uses the namespace cocur/slugify. You need a package’s namespace in order to require it in your project.

When a required package relies on a system library that is currently not installed on your server, you will get an error telling which requirement is missing:

To solve the system dependency problem, we can search for the missing package using apt search:

After locating the correct package name, you can use apt once again to install the system dependency:

Once the installation is finished, you can run the composer require command again:

As you can see from the output, Composer automatically decided which version of the package to use. If you check your project’s directory now, it will contain two new files: composer.json and composer.lock, and a vendor directory:

The composer.lock file is used to store information about which versions of each package are installed, and ensure the same versions are used if someone else clones your project and installs its dependencies. The vendor directory is where the project dependencies are located. The vendor folder shouldn’t be committed into version control - you only need to include the composer.json and composer.lock files.

When installing a project that already contains a composer.json file, run composer install in order to download the project’s dependencies.

Let’s take a quick look at version constraints. If you check the contents of your composer.json file, you’ll see something like this:

You might notice the special character ^ before the version number in composer.json. Composer supports several different constraints and formats for defining the required package version, in order to provide flexibility while also keeping your project stable. The caret (^) operator used by the auto-generated composer.json file is the recommended operator for maximum interoperability, following semantic versioning. In this case, it defines 4.0 as the minimum compatible version, and allows updates to any future version below 5.0.

Generally speaking, you won’t need to tamper with version constraints in your composer.json file. However, some situations might require that you manually edit the constraints–for instance, when a major new version of your required library is released and you want to upgrade, or when the library you want to use doesn’t follow semantic versioning.

Here are some examples to give you a better understanding of how Composer version constraints work:

For a more in-depth view of Composer version constraints, see the official documentation.

Next, let’s look at how to load dependencies automatically with Composer.

Step 4 — Including the Autoload Script

Since PHP itself doesn’t automatically load classes, Composer provides an autoload script that you can include in your project to get autoloading working for your project. This file is automatically generated by Composer when you add your first dependency.

The only thing you need to do is include the vendor/autoload.php file in your PHP scripts before any class instantiation.

Let’s try it out in our demo application. Open a new file called test.php in your text editor:

Add the following code which brings in the vendor/autoload.php file, loads the cocur/slugify dependency, and uses it to create a slug:

Save the file and exit your editor.

This produces the output hello-world-this-is-a-long-sentence-and-i-need-to-make-a-slug-from-it.

Dependencies need updates when new versions come out, so let’s look at how to handle that.

Whenever you want to update your project dependencies to more recent versions, run the update command:

This will check for newer versions of the libraries you required in your project. If a newer version is found and it’s compatible with the version constraint defined in the composer.json file, Composer will replace the previous version installed. The composer.lock file will be updated to reflect these changes.

You can also update one or more specific libraries by specifying them like this:

Be sure to check in your composer.json and composer.lock files within your version control system after you update your dependencies so that others can install these newer versions too.

Composer is a powerful tool that can greatly facilitate the work of managing dependencies in PHP projects. It provides a reliable way of discovering, installing, and updating PHP packages that a project depends on. In this guide, we saw how to install Composer, how to include new dependencies in a project, and how to update these dependencies once new versions are available.