How To Install Prometheus using Docker on CentOS 7

Published on January 15, 2016
By Julius Volz
Developer and author at DigitalOcean.

Prometheus is an open source monitoring system and time series database. It addresses many aspects of monitoring such as the generation and collection of metrics, graphing the resulting data on dashboards, and alerting on anomalies. To achieve this, it offers a variety of components that are run separately but used in combination.

Docker provides a way for you to encapsulate server processes using Linux containers (or other encapsulation technologies) so that they are more easily managed and isolated from each other. To learn more about Docker, see The Docker Ecosystem: An Introduction to Common Components.

In this tutorial, we will learn how to install three key components for using Prometheus on Docker. These are:

There are many more components in the Prometheus ecosystem, but these three provide a good starting point for using Prometheus.

Note: This article has been tested on a 1 CPU/512 MB RAM CentOS 7.1 Droplet. The Prometheus configuration should be adjusted for different amounts of available resources as stated in Step 2 of this article.

There are different patterns for organizing the storage of metrics as well. In this tutorial, we will use the Docker image’s default behavior of using a Docker data volume to store the metrics. You may alternatively consider creating a data volume container if that suits your needs better.

Note: To learn how to create a Docker data volume, read How To Work with Docker Data Volumes on Ubuntu 14.04 (the relevant parts of this article are not Ubuntu-specific).

First, create a minimal Prometheus configuration file on the host filesystem at ~/prometheus.yml:

Add the following contents to the file (replace your_server_ip with your Droplet’s IP address):

Start the Prometheus Docker container with the external configuration file:

The first time you run this command, it will pull the Docker image from the Docker Hub.

This command is quite long and contains many command line options. Let’s take a look at it in more detail:

You can list all running Docker containers using the following command:

For example, you will see something similar to the following for the Prometheus Docker container:

Using the container ID shown in the docker ps output, you may inspect the logs of the running Prometheus server with the command:

In our example, the command would be:

To find out where on the host’s filesystem the metrics storage volume is stored, you can run the following with your container_id:

This will output information about your container’s configuration, including host paths of any mounted Docker volumes.

Find a section in the output that looks similar to this:

In this example, the metrics are stored in /var/lib/docker/volumes/821b0abc470a9c758ff35ed5cff69077423a629566082a605a01d8207d57cd6c/_data on the host system. This directory was automatically created by Docker when first starting the Prometheus container. It is mapped into the /prometheus directory in the container. Data in this directory is persisted across restarts of the same container. If you prefer, you may also mount an existing host directory for storing metrics data. See How To Work with Docker Data Volumes on Ubuntu 14.04 for how to achieve this. This article is written for Ubuntu 14.04, but the docker commands and configuration files are the same on CentOS 7.

You should now be able to reach your Prometheus server at http://your_server_ip:9090/. Verify that it is collecting metrics about itself by heading to http://your_server_ip:9090/status and locating the http://localhost:9090/metrics endpoint for the prometheus job in the Targets section. The State column for this target should show the the target’s state as HEALTHY. In contrast, the http://localhost:9100/metrics (Node Exporter) endpoint should still show up as UNHEALTHY since the Node Exporter has not yet been started and thus cannot be scraped:

To summarize, you now have Prometheus running as a Docker container using the custom Prometheus configuration file ~/prometheus.yml, which is located on the host filesystem. The metrics storage is located in the /prometheus directory in the container, which is backed on the host system by the path shown by the docker inspect command explained in this section.

Note that running the Node Exporter on Docker poses some challenges since its entire purpose is to expose metrics about the host it is running on. If we run it on Docker without further options, Docker’s namespacing of resources such as the filesystem and the network devices will cause it to only export metrics about the container’s environment, which will differ from the host’s environment. Thus it is usually recommended to run the Node Exporter directly on the host system outside of Docker. However, if you have a requirement to manage all your processes using Docker, we will describe a workaround which provides a reasonable approximation for exporting host metrics from within Docker.

To start the Node Exporter on port 9100 using Docker:

The following Docker and Node Exporter flags are used to provide a reasonable approximation for the host metrics:

Note that some metrics will still differ in comparison to a Node Exporter running directly on the host. Specifically, metrics reported about filesystem usage will have a /rootfs prefix in the value of their mountpoint labels, due to us mounting in the root filesystem under this prefix in the container. There is also no guarantee that the described workarounds will be sufficient for any future Node Exporter features, so run Node Exporter on Docker at your own discretion.

Finally, we will set up Grafana. Grafana is a graphical dashboard builder that supports Prometheus as a backend to query for data to graph.

Grafana stores its dashboard metadata (such as which dashboards exist and what graphs they should show) in a configurable SQL-based database. Grafana supports using a local file-backed SQLite3 database as well as external database servers such as MySQL or PostgreSQL for this.

In this tutorial, we will use a SQLite3 database backed by a Docker data volume. See How and When to Use Sqlite for more information.

Launch Grafana as a Docker container with an administrator password (admin_password) of your choosing:

To verify that Grafana is running correctly, head to http://your_server_ip:3000/. The administrator username is admin and the password is the one you chose when starting the Docker container previously.

After logging in, you should see Grafana’s main view: 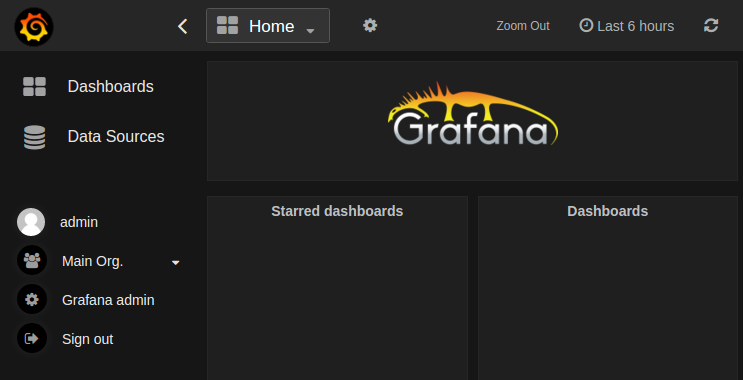 Congratulations! You have set up a Prometheus server, a Node Exporter, and Grafana — all using Docker. Even though these are currently all running on the same machine, this is only for demonstration purposes. In production setups, one would usually run the Node Exporter on every monitored machine, multiple Prometheus servers (as needed by the organization), as well as a single Grafana server to graph the data from these servers.

To learn more about using Prometheus in general, refer to its documentation.