Published on August 3, 2022
By Anupam Chugh
Developer and author at DigitalOcean. 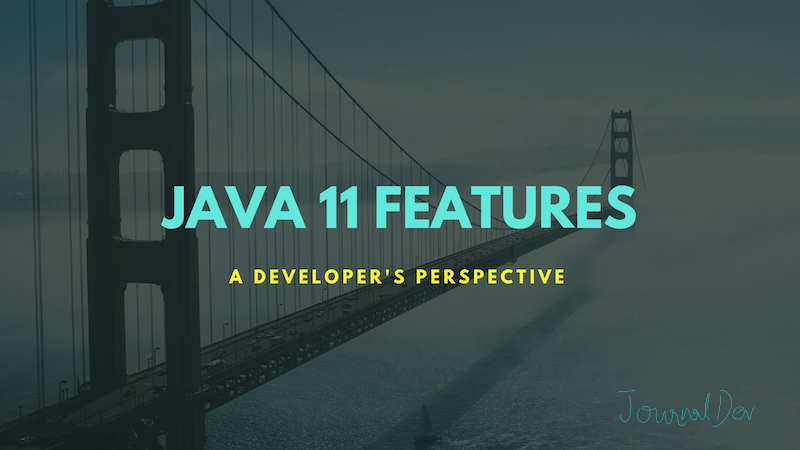 We haven’t fully immersed ourselves in Java 10 yet, and Java 11 is here. Java 11 is important for more than just a few reasons. Oracle has revamped its support model and come up with a release train that’ll bring rapid updates, about every 6 months. They’ve changed the licensing and support model which means if you download the Java 11 Oracle JDK, it will be paid for commercial use.

Does that mean that I need to pay for Java from now on? NO. Not necessarily unless you download the Oracle JDK and use it in production.

Java 11 is the second LTS release after Java 8. Since Java 11, Oracle JDK would no longer be free for commercial use. You can use it in developing stages but to use it commercially, you need to buy a license. If you don’t, you can get an invoice bill from Oracle any day! Java 10 was the last free Oracle JDK that could be downloaded. Oracle stops Java 8 support from January 2019. You’ll need to pay for more support. You can continue using it, but won’t get any patches/security updates.

Oracle will not be providing free long-term support (LTS) for any single Java version since Java 11.

While Oracle JDK is no longer free, you can always download the Open JDK builds from Oracle or other providers such as AdoptOpenJDK, Azul, IBM, Red Hat, etc. In my opinion, unless you are looking for Enterprise level usage with the appetite to pay for the support fees, you can use OpenJDK and upgrade them as and when necessary.

2. Which JDK build should I download and what are the benefits of each of them?

Since Oracle has created a release train in which a new version would come up every six months, if you are using the free Open JDK by Oracle, you will need to update it every six months, since Oracle won’t provide free updates once the new version is released. This can be challenging to adapt to a company. Pay for commercial support to Oracle and migrate only from one LTS version to the next LTS version. This way you’ll get all the updates and support for Java 11 till 2026. You can download Java 17 in 2022. Stay on free Java version even after its support ends. Though you won’t get security updates and it can open up security loopholes.

Oracle won’t provide commercial support or updates for Java 9 and Java 10. You need to look for other alternative builds in order to keep using them for free.

Having understood the baggage Java 11 comes with, lets now analyze the important features in Java 11 for developers. We’ll discuss some important JEPs too. Note: JavaFX will be available as a separate module and not tied to Java JDK’s 6-month release cycle schedule.

You can download production ready OpenJDK version from this link. The binaries are in tar or zip format, so just unzip them and set the environment variables to use java compiler and java commands.

Some of the important Java 11 features are:

Let’s discuss the new features introduced with Java 11 from the JEP Process.

One major change is that you don’t need to compile the java source file with javac tool first. You can directly run the file with java command and it implicitly compiles. This feature comes under JEP 330. Following is a sneak peek at the new methods of Java String class introduced in Java 11:

isBlank() - This instance method returns a boolean value. Empty Strings and Strings with only white spaces are treated as blank.

lines() This method returns a stream of strings, which is a collection of all substrings split by lines.

The output of the above code is:

strip(), stripLeading(), stripTrailing() strip() - Removes the white space from both, beginning and the end of string.

But we already have trim(). Then what’s the need of strip()? strip() is “Unicode-aware” evolution of trim(). When trim() was introduced, Unicode wasn’t evolved. Now, the new strip() removes all kinds of whitespaces leading and trailing(check the method Character.isWhitespace(c) to know if a unicode is whitespace or not)

An example using the above three methods is given below:

The output in the console from the above code is:

repeat(int) The repeat method simply repeats the string that many numbers of times as mentioned in the method in the form of an int.

JEP 323, Local-Variable Syntax for Lambda Parameters is the only language feature release in Java 11. In Java 10, Local Variable Type Inference was introduced. Thus we could infer the type of the variable from the RHS - var list = new ArrayList<String>(); JEP 323 allows var to be used to declare the formal parameters of an implicitly typed lambda expression. We can now define :

This was possible in Java 8 too but got removed in Java 10. Now it’s back in Java 11 to keep things uniform. But why is this needed when we can just skip the type in the lambda? If you need to apply an annotation just as @Nullable, you cannot do that without defining the type. Limitation of this feature - You must specify the type var on all parameters or none. Things like the following are not possible:

Before Java 11 this was possible:

private method of the main class is accessible from the above-nested class in the above manner. But if we use Java Reflection, it will give an IllegalStateException.

The Java class-file format now extends support a new constant pool form, CONSTANT_Dynamic. The goal of this JEP is to reduce the cost and disruption of developing new forms of materializable class-file constraints, by creating a single new constant-pool form that can be parameterized with user-provided behavior. This enhances performance

Now Elipson is good only for test environments. It will lead to OutOfMemoryError in production and crash the applications. The benefit of Elipson is no memory clearance overhead. Hence it’ll give an accurate test result of performance and we can no longer GC for stopping it. Note: This is an experimental feature.

Flight Recorder which earlier used to be a commercial add-on in Oracle JDK is now open-sourced since Oracle JDK is itself not free anymore. JFR is a profiling tool used to gather diagnostics and profiling data from a running Java application. Its performance overhead is negligible and that’s usually below 1%. Hence it can be used in production applications.

Java 11 standardizes the Http CLient API. The new API supports both HTTP/1.1 and HTTP/2. It is designed to improve the overall performance of sending requests by a client and receiving responses from the server. It also natively supports WebSockets.

4.10) Reading/Writing Strings to and from the Files

Following code showcases an example of this

Java 11 provides ChaCha20 and ChaCha20-Poly1305 cipher implementations. These algorithms will be implemented in the SunJCE provider.

Improve the existing string and array intrinsics, and implement new intrinsics for the java.lang.Math sin, cos, and log functions, on AArch64 processors.

Java 11 has introduced a low latency GC. This is an experimental feature. It’s good to see that Oracle is giving importance to GC’s.

Nashorn JavaScript script engine and APIs are deprecated thereby indicating that they will be removed in the subsequent releases.

We’ve gone through the important features and updates provided in Java 11. See you soon when Java 12 releases.

Ask a questionSearch for more help
Was this helpful?
JournalDev • March 21, 2021

Really Amazing blog!! Thanks for providing such useful information

“You can use it in developing stages but to use it commercially, you need to buy a license. If you don’t, you can get an invoice bill from Oracle any day!.” Can u explain this?? Do u have any proof that oracle will send invoice ? Let’s say a startup of 100 people is using oracle jdk in prod , then how oracle will get to know ? Please elaborate .

Explanation is fruitful and user friendly

The way you explain the concepts are really amazing !!! Keep Rocking !!!

Hello, i think there’s a minor mistake in the article: lines() does not return an arrray of Strings, but a stream of lines. See https://docs.oracle.com/en/java/javase/11/docs/api/java.base/java/lang/String.html#lines()

For developing is ok but only for commercial use need to buy. Am I right?

Nice Article on Java 11. Thanks. This is it or we have other features also released in Java 11?