Node.js
This tutorial is out of date and no longer maintained.

Organizing routing in large applications and APIs so that it’s easy to find and maintain in the future can be challenging.

As codebases get more mature and complex, they grow in size. You have unit tests, right? One place where things get hairy is with the organization of the code that handles your routing.

Routing is extremely important. It defines the URL structure that someone uses to interact with your web application. If it’s not organized well, it can be hard to find the logic for “that one route that never seems to work and all our customers are complaining about. What the hell was the original developer thinking anyway!”

There’s light at the end of the tunnel, folks. Express apps utilize routers that are essentially containers for a set of middleware. We can put this middleware holder only on a certain route, which allows us to keep our logic in separate files and bring them together on our terms! We are going to build a very simple car API. We will be implementing the following routes in the application.

Setting Up the Project

Let’s get started by creating a project directory and downloading the dependencies we will use.

Also, let’s add an npm script to our package.json to start our application.

Now let’s create a file that will hold our JSON data for this API. Put the following in a file at the root called data.json.

Create a file in the root of our project called app.js and put the following into it.

We are bringing in Express and our routes. We are connecting our routes to our application using .use. Lastly, we are turning the server on. Let’s create those routes now. Create a file at routes/index.js and put the following in it.

This is a pattern you will see throughout this tutorial. First, we are requiring Express and creating a new instance of Router on it. We are holding that in a variable called routes. Then we are creating a route at the root path of this Router that sends back a simple message. Then we export the Router.

This Router is the “container” for the middleware on this route. Notice in app.js that we imported this module, which exports a Router, and attaches it at the root path of our API.

That means the middleware and routes attached to this Router will be run as long as we are accessing a route that starts at the root path, which always happens! And since we added a route at the root of this router, that means it will be hit when someone visits our root path.

Start up the server with npm start and view localhost:3000 in your browser. You should see our message popup. We will follow a similar pattern for the rest of the API.

Let’s create our model routes now. Create a file at routes/models/index.js. Put the code below in it.

This should look almost dead on the previous one we created. This time we are bringing in a route from a file in the same directory called all.js. Let’s create that next. Put the following in a file at routes/models/all.js.

We are importing our data. Then grabbing all the models and returning them in the response. Our server should be restarting on its own.

So visit localhost:3000/models in the browser… yeah. We get an error. Why doesn’t it know about our new route? It’s because we never connected the models Router to our routes Router. Add the following into routes/index.js. 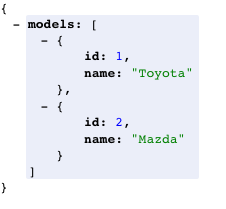 This imports all our model routes and attaches them to the main router of our application. Now you should be able to see all our models in the browser. Let’s make the next route so we can get only one model. Put the following in routes/models/single.js.

We are finding the model and returning it. The line req.params.modelId * 1 simply coerces our modelId from a string into an integer. We need it as an integer since that is how it’s stored in our data file. Add the following to routes/models/index.js to connect this route to our application.

We need to add cars as a nested resource of models. We can do this by simply creating another Router and attaching it to our models Router. First, add the following to routes/models/index.js.

This should look very familiar by now! The only new thing here is the mergeParams: true option passed when creating the Router. This tells the Router to merge parameters that are created on this set of routes with the ones from its parents. Without this, we wouldn’t have access to the modelId from any of the routes connected to this Router.

Now we just need to create the logic for our all route. Create a file at /routes/models/cars/all.js, and put the following in it:

Pretty simple. Just getting all the cars that have a modelId matching the one in the URL. Try it out in the browser. Check out localhost:3000/models/1/cars. You should see all cars in our “database” made by Toyota. 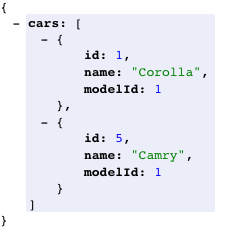 Now, we need to make routes for cars, but they need to be at the top level, not behind models. Because of the way we have organized things, this is a cinch. Add the following to routes/index.js.

Here we’re simply attaching a new Router to our main Router. Let’s create it now. Create a file at /routes/cars/index.js and put the following in it.

This should look extremely familiar, so I won’t bore you with another explanation. Put the following in a file at routes/cars/all.js.

Lastly, insert the following into a file at routes/cars/single.js.

Now we have a working API, but there is something bothering me. When we try to see data about a model that doesn’t exist, like /models/200, we should get a 404 error, but we don’t. We get an empty object. That’s not cool with me. Let’s fix this.

Instead of implementing this in every single route handler we have, let’s create some middleware that will do it for us. We can add some middleware onto our routers that will only get called when those routes are hit. Let’s add a param middleware to our models Router to make sure the model exists. If it doesn’t, we want to return a 404.

Add the following to routes/models/index.js:

We are importing our data. Then we add a param middleware to the Router. This middleware will be called whenever modelId is present in the URL. This is perfect since this is what we want to validate! We are finding the model, and if it doesn’t exist, we return a 404. If it does exist, we put it on the request for later usage and then move on to the next piece of middleware.

Now let’s add it to our cars routes. Add the following to routes/cars/index.js.

Now we have some pretty sweet stuff going on here, but I’m still not satisfied. The code we just added to each of those index files looks way too similar. Refactoring to the rescue!

Create a file at utils/findObject.js and put the following in it.

This should look very familiar. This code here is a function that, when called, returns our middleware function that we used in the previous two files. Our function takes a type. In our case, this type will be either “car” or “model.” We use this type to make sure we search through the correct piece of data for our object and then to make sure we add the correct piece of data to the request. Now we can use this to clean up our files from before. Replace the code we just added to the following in each of the given files.

So much cleaner! If you view things in the browser, you will see that things still work the same, yet the code is cleaner and more modularized. We can also clean up some of our route handlers since we have access to that object in the request by the time the handler is hit.

If you try this in your browser, it still works! Beautiful!

Routing is super important once apps start getting bigger and more complex. Having a good base for your routes will help you out in the future. Using this technique will make sure that you never have to spend a ton of time looking for a route handler. Just make sure the file structure follows the URL structure, and you’re good to go! Please leave any comments or feedback in the comments below!