Published on August 3, 2022
By Shubham
Developer and author at DigitalOcean.

In this quick post, we will learn how to create and use a Python static method. We will also have a look at what advantages and disadvantages static methods offer as compared to the instance methods. Let’s get started. 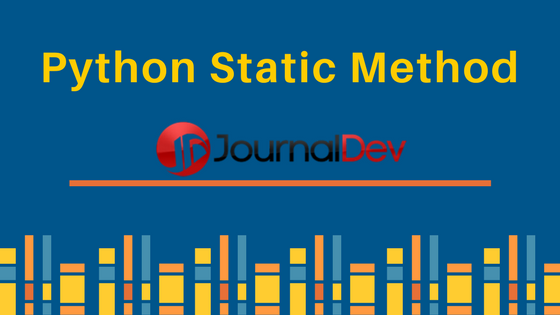 What is a static method?

Python Static methods can be created in two ways. Let’s see each of the ways here:

Let’s directly jump to sample code snippet on how to use the staticmethod() approach:

Note that we called the addNumbers we created without an object. When we run this program, here is the output we will get:

There were no surprises there. This approach is controlled as at each place, it is possible to create a static method out of a class method as well. Let’s see another approach with the same example here.

This is a more subtle way of creating a Static method as we do not have to rely on a statement definition of a method being a class method and making it static at each place you make it static. Let’s use this annotation in a code snippet:

When we run this program, here is the output we will get:

This was actually a much better way to create a static method as the intention of keeping the method static is clear as soon as we create it and mark it with the @staticmethod annotation.

Static methods have a very clear use-case. When we need some functionality not w.r.t an Object but w.r.t the complete class, we make a method static. This is pretty much advantageous when we need to create Utility methods as they aren’t tied to an object lifecycle usually. Finally, note that in a static method, we don’t need the self to be passed as the first argument. API Reference: Python Documentation

Ask a questionSearch for more help
Was this helpful?
JournalDev • January 31, 2022

Actually, this example works even if the @staticmethod decorator is removed. However, if the class had a mixture of static and non-static methods then the decorator would be necessary.

Good explanation! But the method is called multiplyNums, but, actually, it is summing the numbers?!

What does w.r.t mean?

Why are you adding the numbers in the first example?