Create a MEAN app with Angular and Docker Compose

Draft updated on Invalid Date
By Chris Ganga
Developer and author at DigitalOcean.

This article has been updated based on the updates to both docker and angular since this article was written. The current version of angular is 7, the updates also adds an attached docker volume to the angular client so that you don’t need to run docker-compose build every time.

Docker allows us to run applications inside containers. These containers in most cases communicate with each other.

Docker containers wrap a piece of software in a complete filesystem that contains everything needed to run: code, runtime, system tools, system libraries – anything that can be installed on a server. This guarantees that the software will always run the same, regardless of its environment.

If you haven’t worked with Docker before, this would be a good starting point as we will explain every step covered, in some detail.

You need to have docker and docker-compose installed in your setup. Instructions for installing docker in your given platform can be found here.

Instructions for installing docker-compose can be found here.

Verify your installation by running:

We’ll now separately build out these three parts of our app. The approach we are going to take is building the app in our local environment, then dockerizing the app.

Once these are running, we’ll connect the three docker containers. Note that we are only building two containers, Angular and the Express/Node API. The third container will be from a MongoDB image that we’ll just pull from the Docker Hub.

Docker Hub is a repository for docker images. It’s where we pull down official docker images such as MongoDB, NodeJs, Ubuntu, and we can also create custom images and push them to Docker Hub for other people to pull and use.

Let’s create a directory for our whole setup, we’ll call it mean-docker.

Next, we’ll create an Angular app and make sure it runs in a docker container.

Create a directory called angular-client inside the mean-docker directory we created above, and initialize an Angular App with the Angular CLI.

We’ll use npx, a tool that allows us to run CLI apps without installing them into our system. It comes preinstalled when you install Node.js since version 5.2.0

This scaffolds an Angular app, and npm installs the app’s dependencies. Our directory structure should be like this

Running npm start, inside the angular-client directory should start the angular app at http://localhost:4200.

To dockerize any app, we usually need to write a Dockerfile

A Dockerfile is a text document that contains all the commands a user could call on the command line to assemble an image.

To quickly brainstorm on what our angular app needs in order to run,

Those are the exact instructions we are going to write in our Dockerfile.

I’ve commented on the file to show what each instruction clearly does.

Note: Before we build the image, if you are keen, you may have noticed that the line COPY . /app/ copies our whole directory into the container, including node_modules. To ignore this, and other files that are irrelevant to our container, we can add a .dockerignore file and list what is to be ignored. This file is usually sometimes identical to the .gitignore file.

One last thing we have to do before building the image is to ensure that the app is served from the host created by the docker image. To ensure this, go into your package.json and change the start script to:

To build the image we will use docker build command. The syntax is

Make sure you are in the mean_docker/angular-client directory, then build your image.

-t is a shortform of --tag, and refers to the name or tag given to the image to be built. In this case the tag will be angular-client:dev.

This could take a while depending on your internet connection.

Now that the image is built, we can run a container based on that image, using this syntax

The -d flag tells docker to run the container in detached mode. Meaning, it will run and get you back to your host, without going into the container.

--name refers to the name that will be assigned to the container.

-p or --port refers to which port our host machine should point to in the docker container. In this case, localhost:4200 should point to dockerhost:4200, and thus the syntax 4200:4200.

Visit localhost:4200 in your host browser should be serving the angular app from the container.

You can stop the container running with:

We’ve containerized the angular app, we are now two steps away from our complete setup.

Containerizing an express app should now be straightforward. Create a directory in the mean-docker directory called express-server.

Add the following package.json file inside the app.

Then, we’ll create a simple express app inside it. Create a file server.js

This is a simple express app, install the dependencies and start the app.

Going to localhost:3000 in your browser should serve the app.

To run this app inside a Docker container, we’ll also create a Dockerfile for it. It should be pretty similar to what we already have for the angular-client.

You can see the file is pretty much the same as the angular-client Dockerfile, except for the exposed port.

You could also add a .dockerignore file to ignore files we do not need.

We can then build the image and run a container based on the image with:

Going to localhost:3000 in your browser should serve the API.

Once you are done, you can stop the container with

The last part of our MEAN setup, before we connect them all together is the MongoDB. Now, we can’t have a Dockerfile to build a MongoDB image, because one already exists from the Docker Hub. We only need to know how to run it.

Assuming we had a MongoDB image already, we’d run a container based on the image with

The image name in this instance is mongo, the last parameter, and the container name will be mongodb.

Docker will check to see if you have a mongo image already downloaded, or built. If not, it will look for the image in the Dockerhub. If you run the above command, you should have a mongodb instance running inside a container.

To check if MongoDB is running, simply go to http://localhost:27017 in your browser, and you should see this message. It looks like you are trying to access MongoDB over HTTP on the native driver port.

Alternatively, if you have mongo installed in your host machine, simply run mongo in the terminal. And it should run and give you the mongo shell, without any errors.

To connect and run multiple containers with docker, we use Docker Compose.

Compose is a tool for defining and running multi-container Docker applications. With Compose, you use a Compose file to configure your application’s services. Then, using a single command, you create and start all the services from your configuration.

docker-compose is usually installed when you install docker. So to simply check if you have it installed, run:

You should see a list of commands from docker-compose. If not, you can go through the installation here

Create a docker-compose.yml file at the root of our setup.

Then edit the docker-compose.yml file

The docker-compose.yml file is a simple configuration file telling docker-compose which containers to build. That’s pretty much it.

Now, to run containers based on the three images, simply run

This will build the images if not already built, and run them. Once it’s running, and your terminal looks something like this.

We now finally need to connect the three containers. We’ll first create a simple CRUD feature in our API using mongoose. You can go through Easily Develop Node.js and MongoDB Apps with Mongoose to get a more detailed explanation of mongoose.

First of all, add mongoose to your express server package.json

We need to update our API to use MongoDB:

Two main differences, first of all, our connection to MongoDB is in the line const dbHost = 'mongodb://database/mean-docker';. This database is the same as the database service we created in the docker-compose file.

Update the docker-compose file, telling the express service to link to the database service.

The links property of the docker-compose file creates a connection to the other service with the name of the service as the hostname. In this case database will be the hostname. Meaning, to connect to it from the express service, we should use database:27017. That’s why we made the dbHost equal to mongodb://database/mean-docker.

Also, I’ve added a volume to the angular service. This will enable changes we make to the Angular App to automatically trigger recompilation in the container

Angular best practices guides usually recommend separating most logic into a service/provider. We’ve placed all the code in the component here for brevity.

We’ve imported the OnInit interface, to call events when the component is initialized, then added two methods AddPerson and getAllPeople, that call the API.

Notice that this time around, our API is pointing to localhost. This is because while the Angular 2 app will be running inside the container, it’s served to the browser. And the browser is the one that makes requests. It will thus make a request to the exposed Express API. As a result, we don’t need to link Angular and Express in the docker-compose.yml file.

Next, we need to make some changes to the template. I first added bootstrap via CDN to the index.html

Then update the app.component.html template

The above template shows the components’ properties and bindings. We are almost done.

Since we’ve made changes to our code, we need to do a build for our Docker Compose

The --build flag tells docker compose that we’ve made changes and it needs to do a clean build of our images.

Once this is done, go to localhost:4200 in your browser, 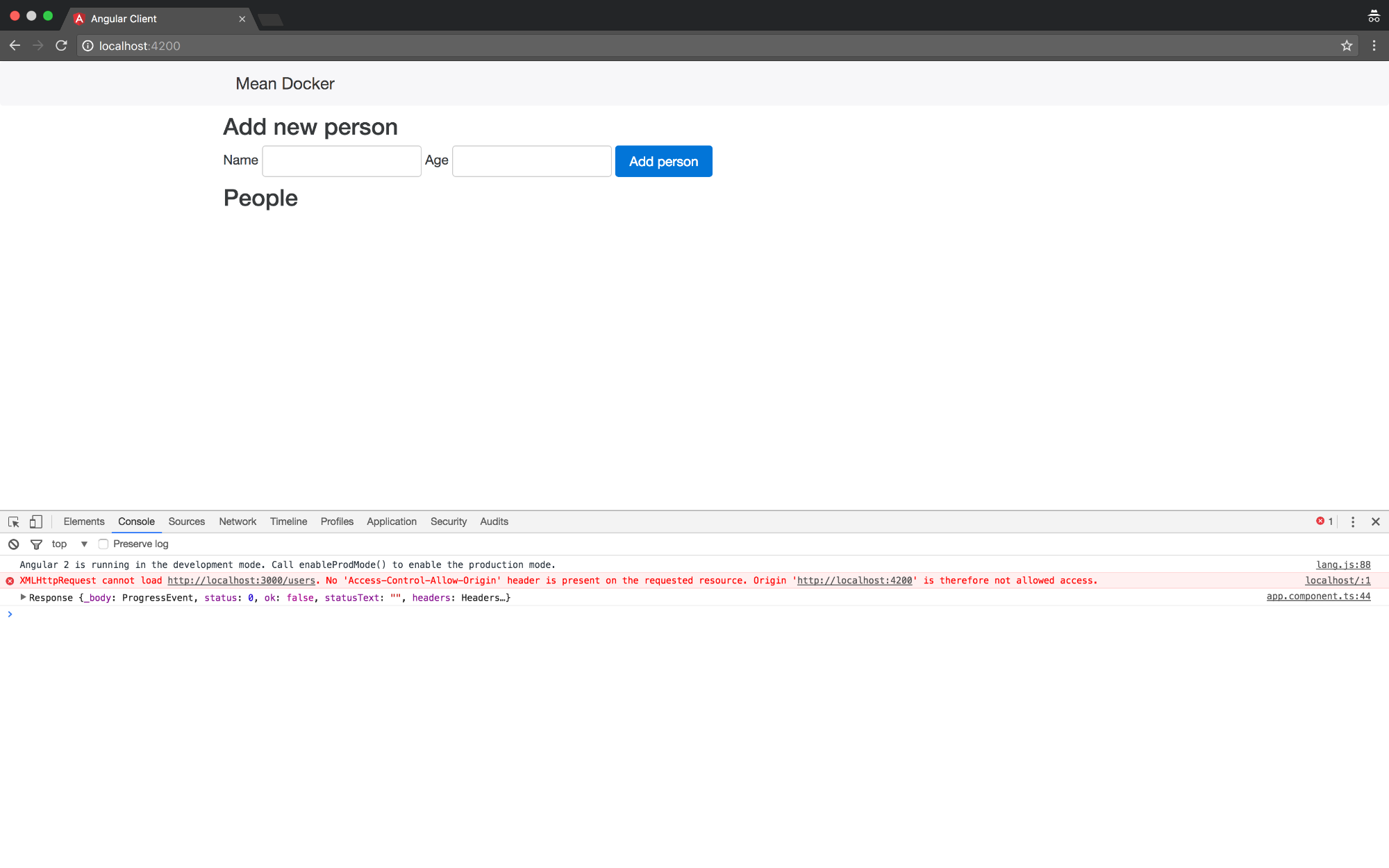 We are getting a No 'Access-Control-Allow-Origin' error. To quickly fix this, we need to enable Cross-Origin in our express app. We’ll do this with a simple middleware.

We can now run docker-compose again with the build flag. You should be in the mean-docker directory.

Going to localhost:4200 on the browser. 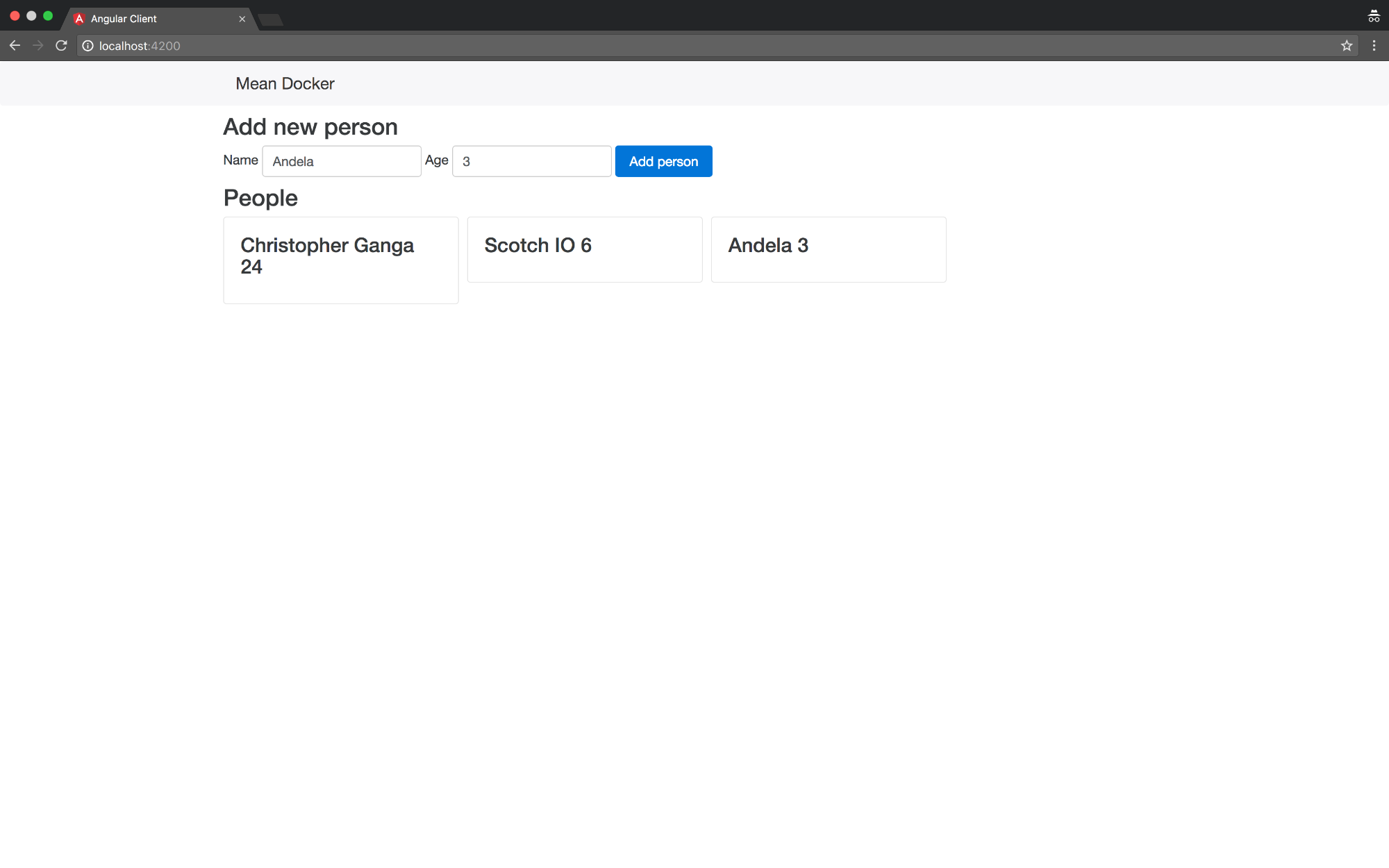 Note: I added an attached volume to the docker-compose file, and we now no longer need to rebuild the service every time we make a change.

I bet you’ve learned a thing or two about MEAN or docker and docker-compose.

The problem with our set up however is that any time we make changes to either the angular app or the express API, we need to run docker-compose up --build.

This can get tedious or even boring over time. We’ll look at this in another article.