How To Install Nginx on Ubuntu 18.04
View

How To Secure Apache with Let's Encrypt on Ubuntu 18.04
View

By Chimezie Enyinnaya
Developer and author at DigitalOcean.

Warning: For the latest information, refer to the documentation for creating 1-Click NodeJS Droplets on DigitalOcean.

There are various platforms that help with deploying Node.js apps to production.

In this tutorial, we’ll be looking at how to deploy a Node.js app to DigitalOcean. DigitalOcean compared to these other platforms is cheaper and you also can log on to your server and configure it however you like.

You get more control over your deployment and also it’s a great experiment to see exactly how Node apps are deployed to production.

This tutorial assumes the following:

What We’ll Be Deploying

Let’s quickly build a sample app that we’ll use for the purpose of this tutorial. It going to be a pretty simple app.

Open index.js and paste the code below into it:

You can start the app with:

The complete code is available on GitHub.

Login to your DigitalOcean account and create a new droplet (server). We’ll be going to with One-click apps. Select Node.js as shown below: 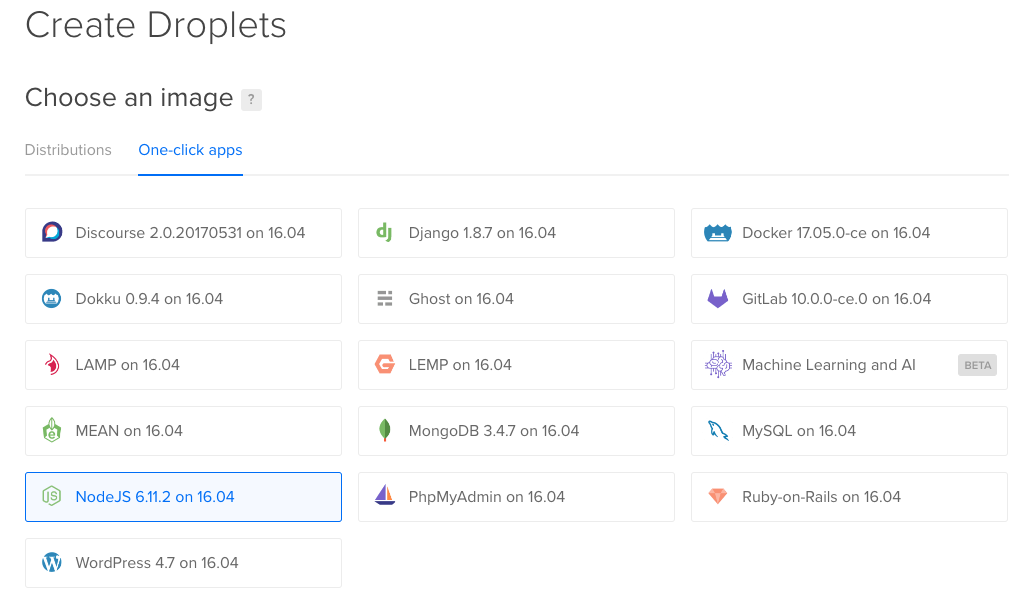 Next, we’ll choose the $10 plan. Though the task list app will work perfectly on the $5 plan, but we won’t be able to install the npm dependencies because the npm requires at least 1GB RAM for installing dependencies. Though there is a way around this by creating swap memory which is beyond the scope of this tutorial. 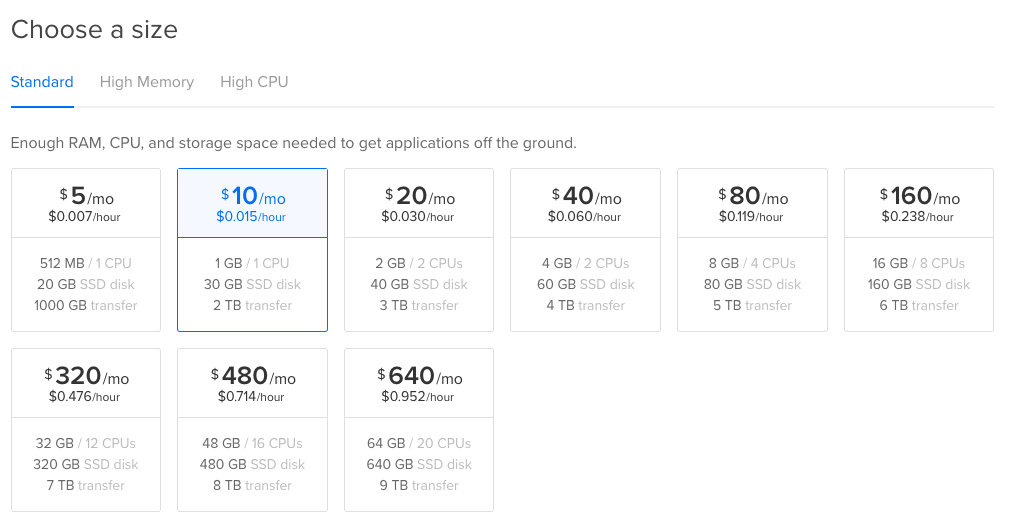 Next, select a datacenter region, we’ll go with the default:

Next, add a new SSH key or choose from the existing ones that you have added. You can get your SSH key by running the command below on your local computer:

The command above will print your SSH key on the terminal, which you can then copy and paste in the SSH Key Content field. Also, give your SSH key a name. 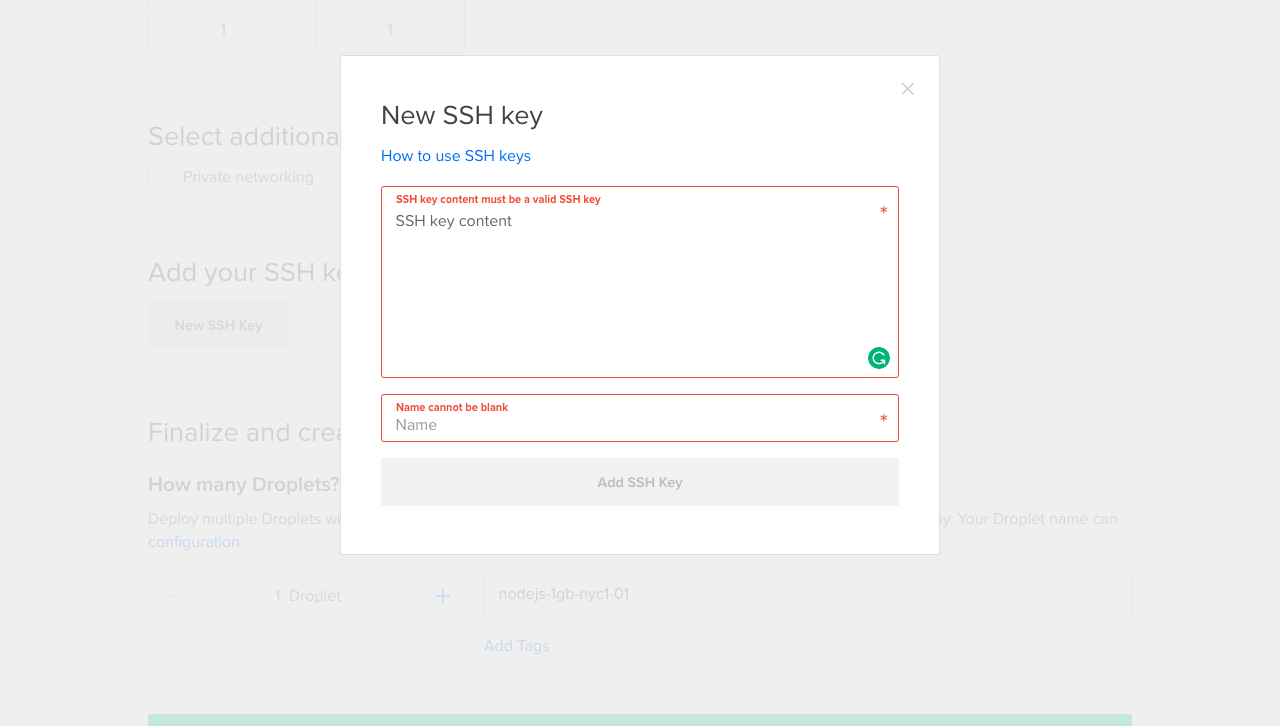 Finally, choose a hostname for the droplet and click the Create button.

After a couple of seconds, you’ll have your new server up and running on Ubuntu 16.04 and NodeJS version 6.11.2. Note the IP address of the server as we’ll be using it to access the server.

Before we start configuring the server for the task app, let’s quickly create a non-root user which we’ll use henceforth for the rest of the tutorial.

Note: As a security measure, it is recommended to carry out tasks on your server as a non-root user with administrative privileges.

First, we need to log in to the server as root. We can do that using the server’s IP address:

Once we are logged in to the server, we can move on to create a new user:

This will create a new user called mezie, you can name the user whatever you like. You will be asked a few questions, starting with the account password.

The command above adds the user mezie to sudo group.

Now the user can run commands with superuser privileges.

You need to copy your public key to your new server. Enter the command below on your local computer:

This will print your SSH key to the terminal, which you can then copy.

For the new user to log in to the server with SSH key, we must add the public key to a special file in the user’s home directory.

Still logged in as root on the server, enter the following command:

This will temporarily switch to the new user. Now you’ll be in your new user’s home directory.

Next, we need to create a new directory called .ssh and restrict its permission:

Next, within the .ssh directory, create a new file called authorized_keys:

Next, open the file with vim:

Next, paste your public key (copied above) into the file. To save the file, hit ESC to stop editing, then :wq and press ENTER.

Next, restrict the permissions of the authorized_keys file with this command:

Type the command below to return to the root user:

Now your public key is installed, and you can use SSH keys to log in as your user.

To make sure you can log in as the new user with SSH. Enter the command below in a new terminal on your local computer:

If all went well, you’ll be logged in to the server as the new user with SSH.

The rest of the tutorial assumes you are logged in to the server with the new user created (mezie in my case).

Clone The App on The Server

We are going to clone the app unto the server directly in the user’s home directory (that is, /home/mezie in my case):

Next, we install the dependencies:

Once the dependencies are installed we can test the app to make sure everything is working as expected. We’ll do so with:

The app is listening on port 3000 and can be accessed at http://localhost:3000. To test the app is actually working, open a new terminal (still on the server) and enter the command below:

You should get an output as below:

Good! The app is up and running fine. But whenever the app crashes we’ll need to manually start the app again which is not a recommended approach. So, we need a process manager to help us with starting the app and restarting it whenever it crashes. We’ll use PM2 for this.

We’ll install it globally through npm:

With PM2 installed, we can start the app with it:

Once the app is started you will get an output from PM2 indicating the app has started.

To launch PM2 on system startup or reboot, enter the command below:

You’ll get the following output:

Copy and run the last command from the output above:

Now PM2 will start at boot up.

Next, we’ll install Nginx as the webserver to be used for reverse proxy which will allow us to access the app directly with an IP address or domain instead of tacking port to the IP address.

Because we chose 1-Click Apps while creating our Droplet, ufw firewall is set up for us and running. Now, we need to open the firewall for only HTTP since we are not concerned with SSL in this tutorial:

Set Up Nginx as a Reverse Proxy Server

Finally, we set up Nginx as a reverse proxy server. To this, run:

Within the server block you should have an existing location / block. Replace the contents of that block with the following configuration:

Save and exit vim.

Test to make sure there are no syntax errors in the configuration by running:

Now you should be able to access the app with your IP_ADDRESS. You should get something similar to the image below:

In this tutorial, we have seen how to deploy a Node.js app to DigitalOcean. We also saw how to setup a reverse proxy server with Nginx.