How To Get Started With Python in Visual Studio Code

By James Quick
Developer and author at DigitalOcean.

Python is one of the most popular and easy to learn languages, which is why it is often one of the first languages you learn. Let’s see how to work with and run Python inside of Visual Studio Code.

In this tutorial you’ll install the Python extension then use intellisense and shortcuts to run your Python code.

Inside of Visual Studio Code, open the directory you’re working in by going to File -> Open and selecting the directory. After that, you’ll see your folder open in the explorer window on the left. 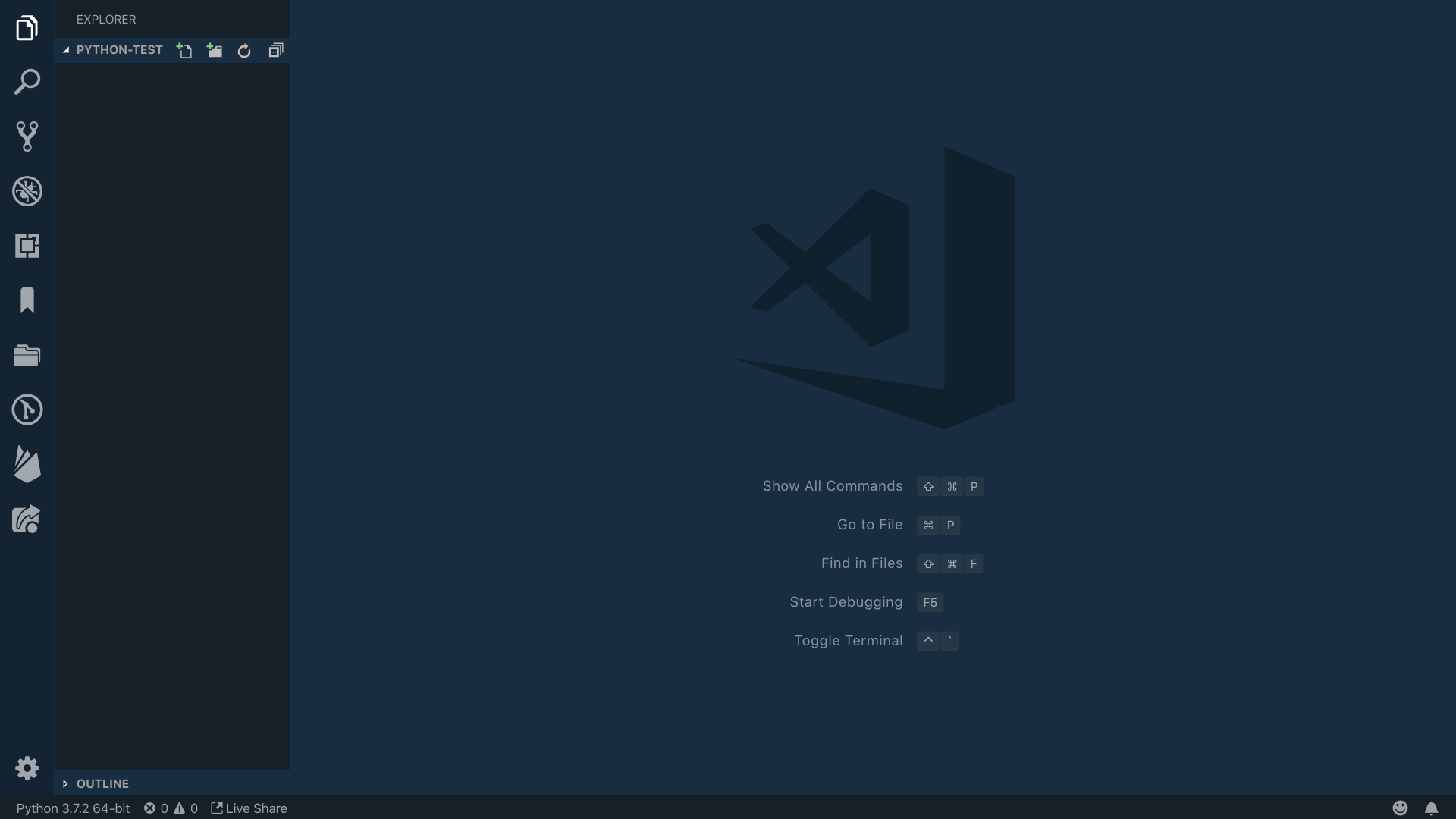 With the directory open, you can create your first Python file (.py extension) with some code to print "Hello World". 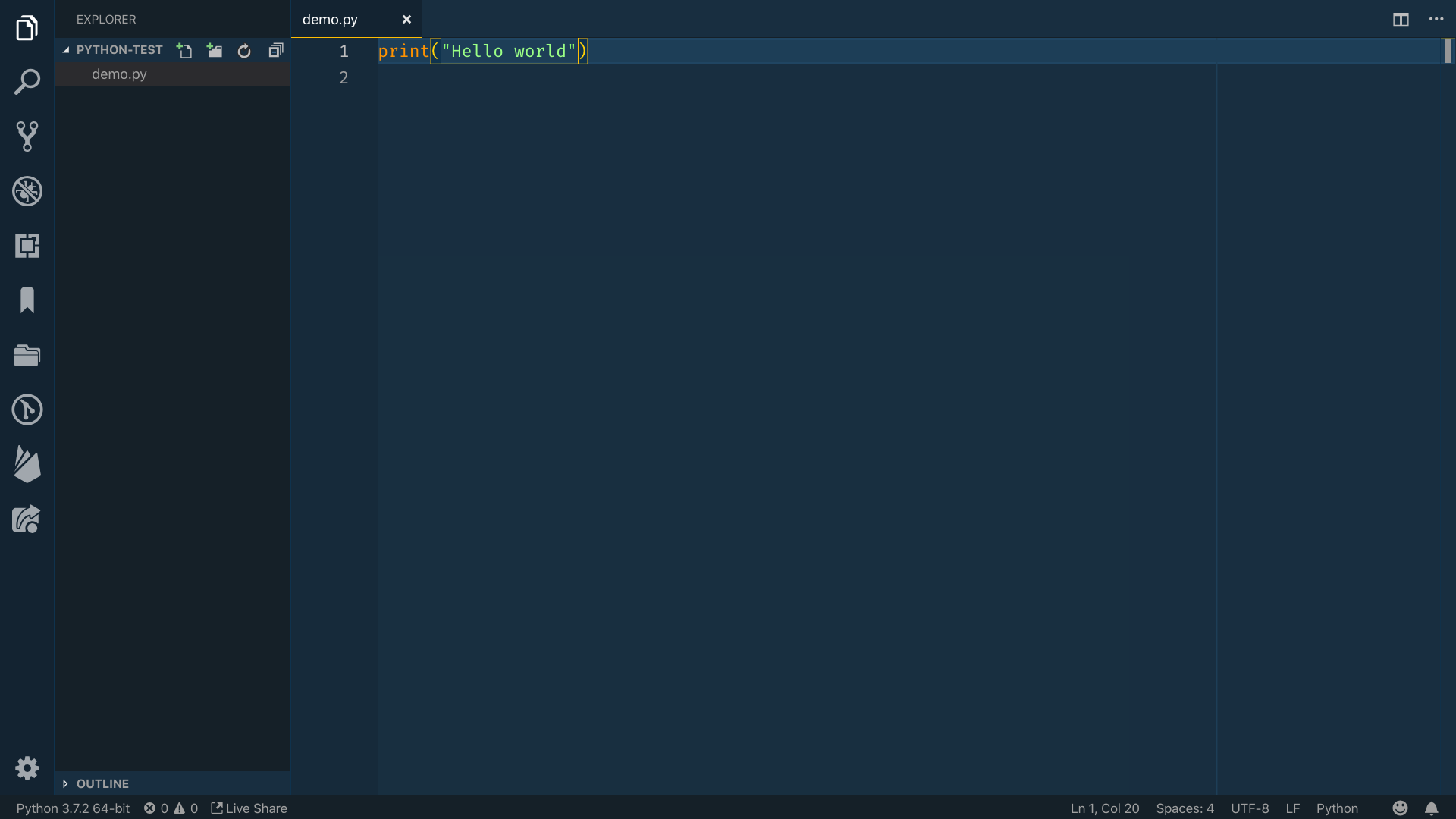 Now that you have your Hello World code ready, we can run it by using the built-in terminal in Visual Studio Code. If if is not open already, you can open it by going to View -> Terminal or use the shortcut, CTRL+~. 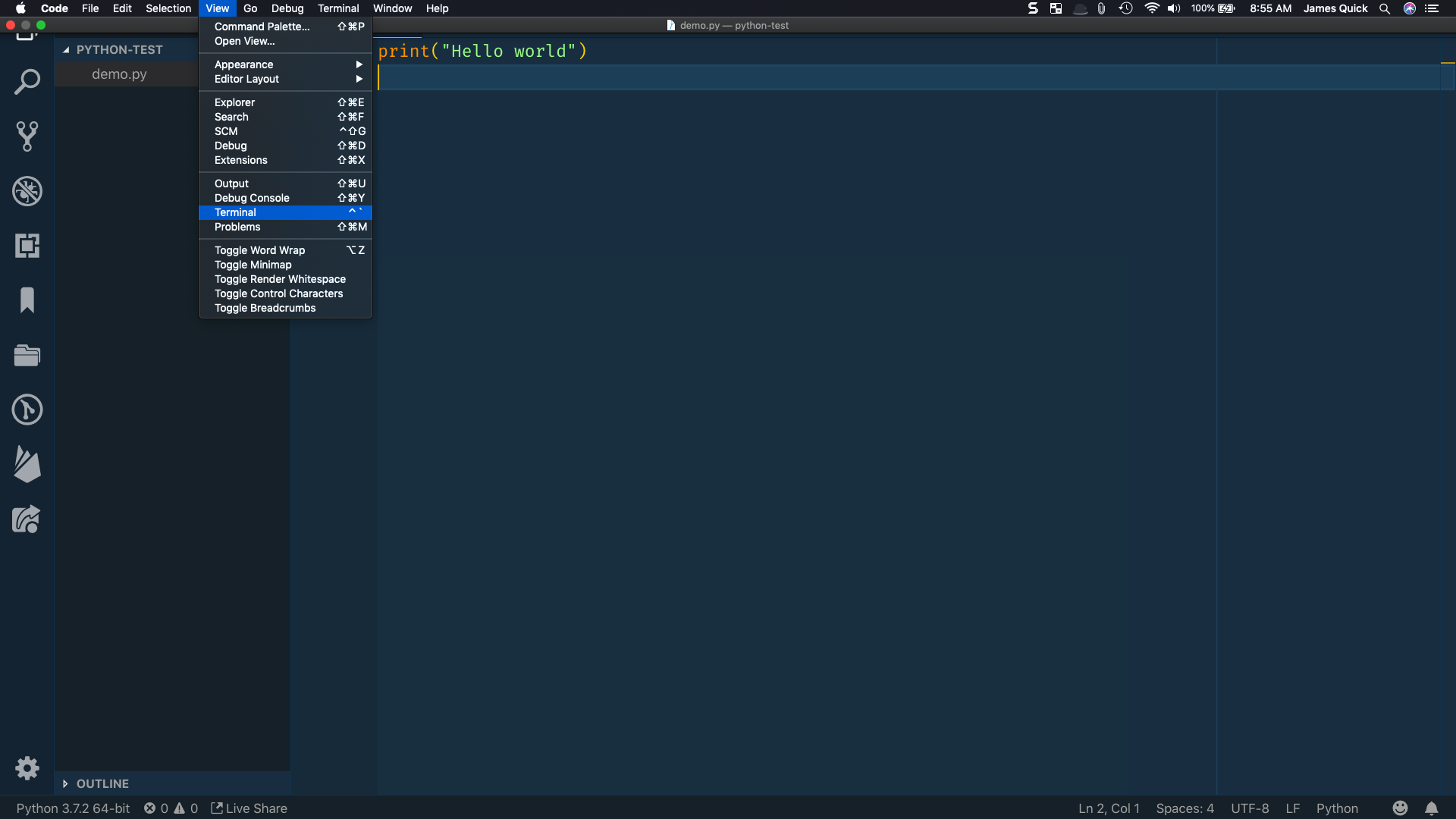 The terminal that you just opened will automatically start in the current directory that you are editing in Visual Studio Code. This is exactly why we created and opened a directory before getting started. We can prove this by running the following command:

Now, you can run your Python file with the following command:

After running, you’ll see Hello World printed out in the console. 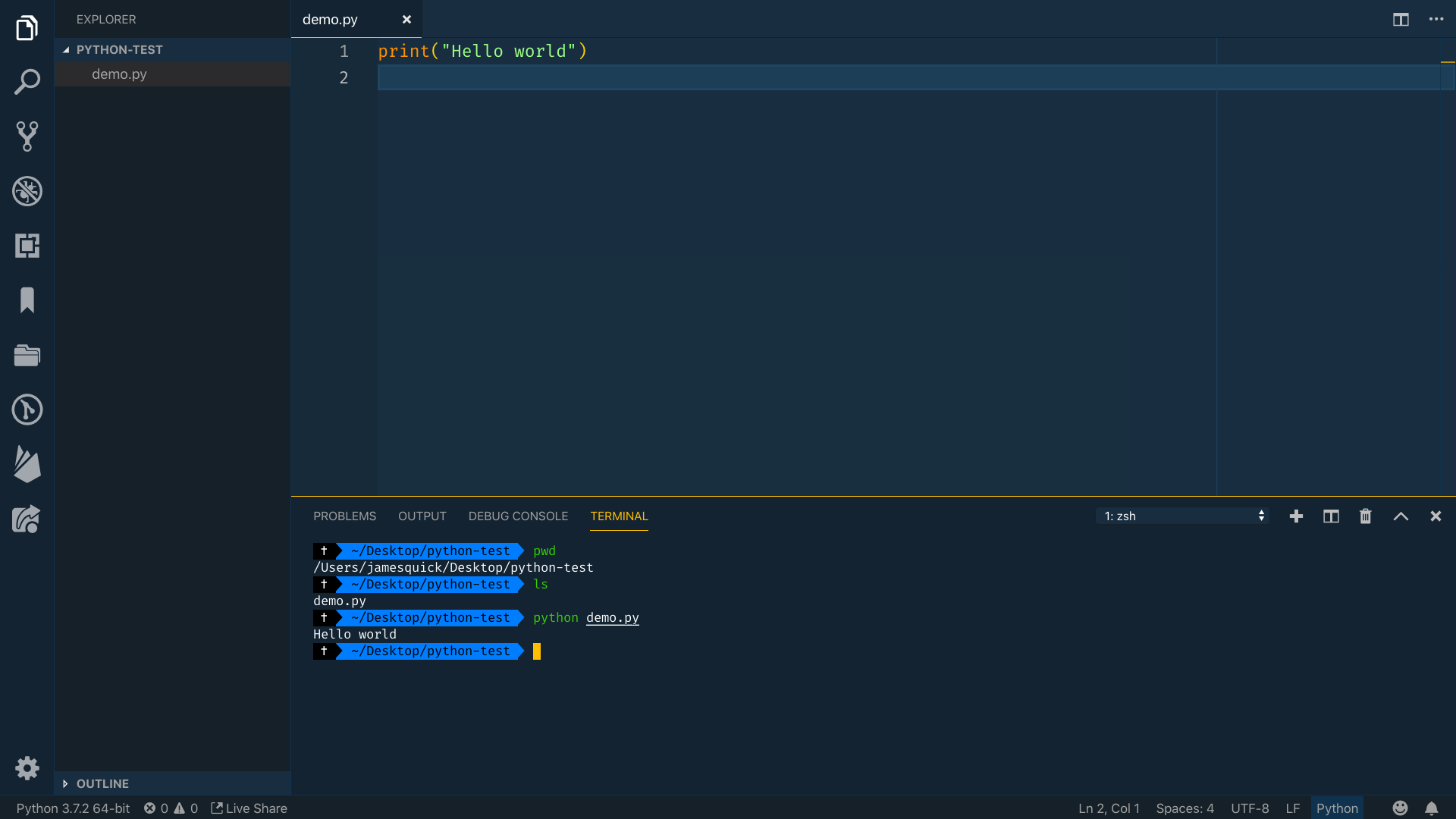 We can streamline the process of working with Python in Visual Studio by installing the Python extension created by Microsoft. To install the extension, open up the extension menu on the left (the icon looks like a square inside of a square) and search Python.

It will be the first one that pops up, and you can click on it to view the extension details and click Install. 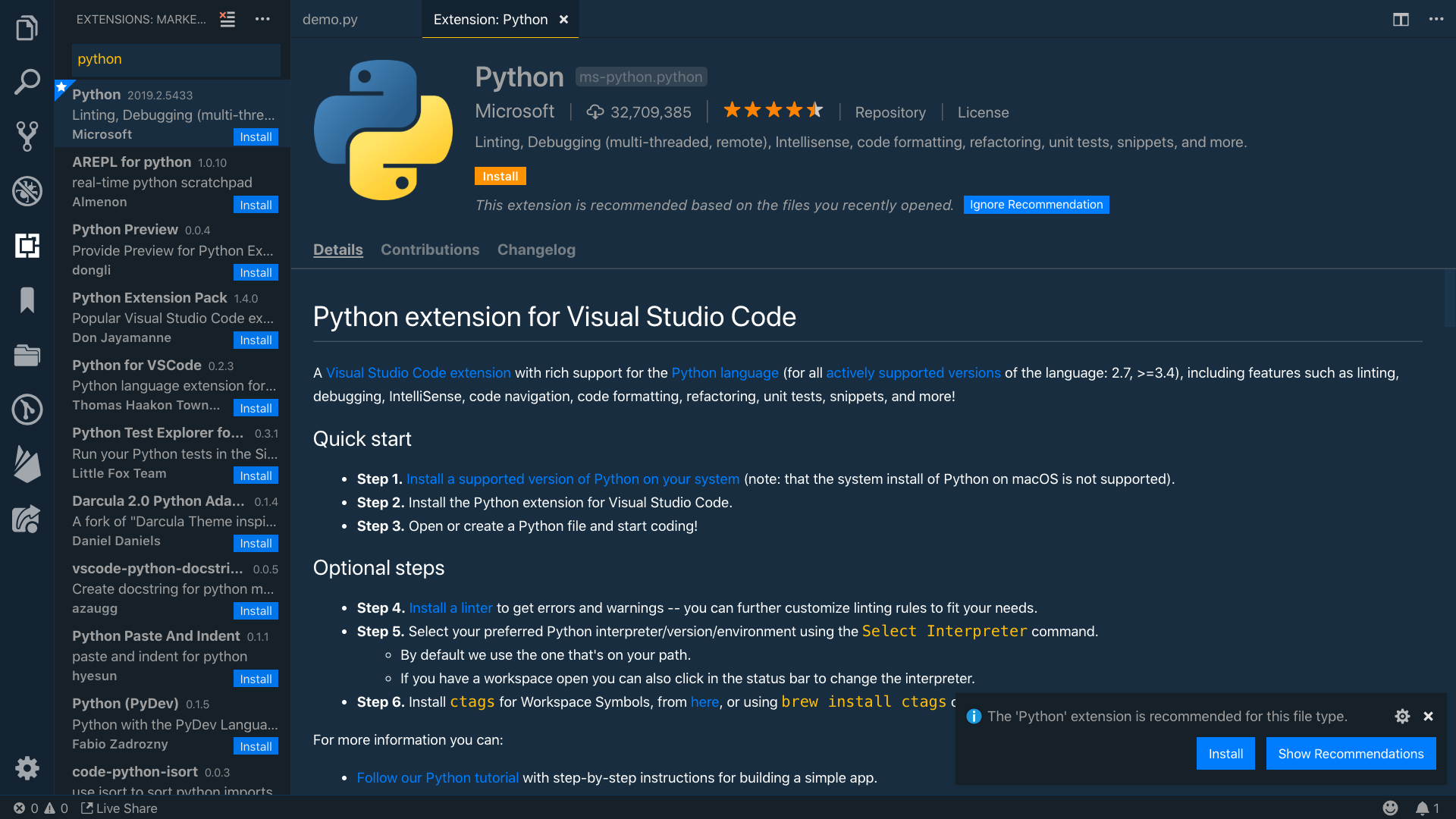 After installing, you might need to reload, so go ahead and do that.

After you restart, you can now take advantage of the Python extension’s features:

Then following type list. followed by a period and notice that some information pops up. The extension is providing you all the functions and properties of a list that you can use. 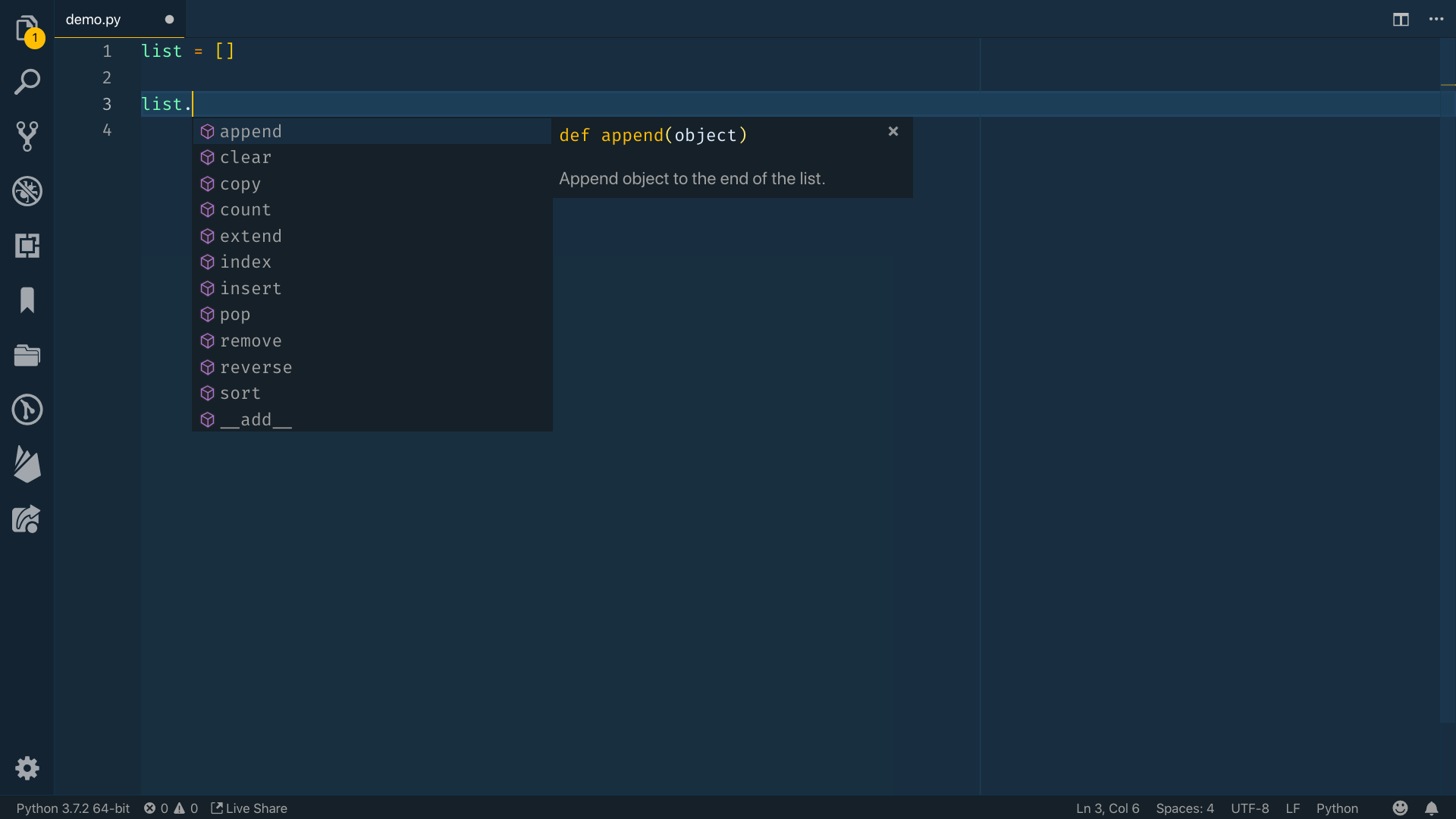 If you want to use one of those functions, you can press ENTER or TAB to auto-complete that function name. This means that don’t have to memorize every function in Python because the extension will give you hints as to what is available. Notice also that it shows you a brief description of what the function does and what parameters it takes.

You can also get intellisense when importing modules in Python. Notice if you type random, intellisense pops up to complete the name of the module as well as providing some background info on what it does. 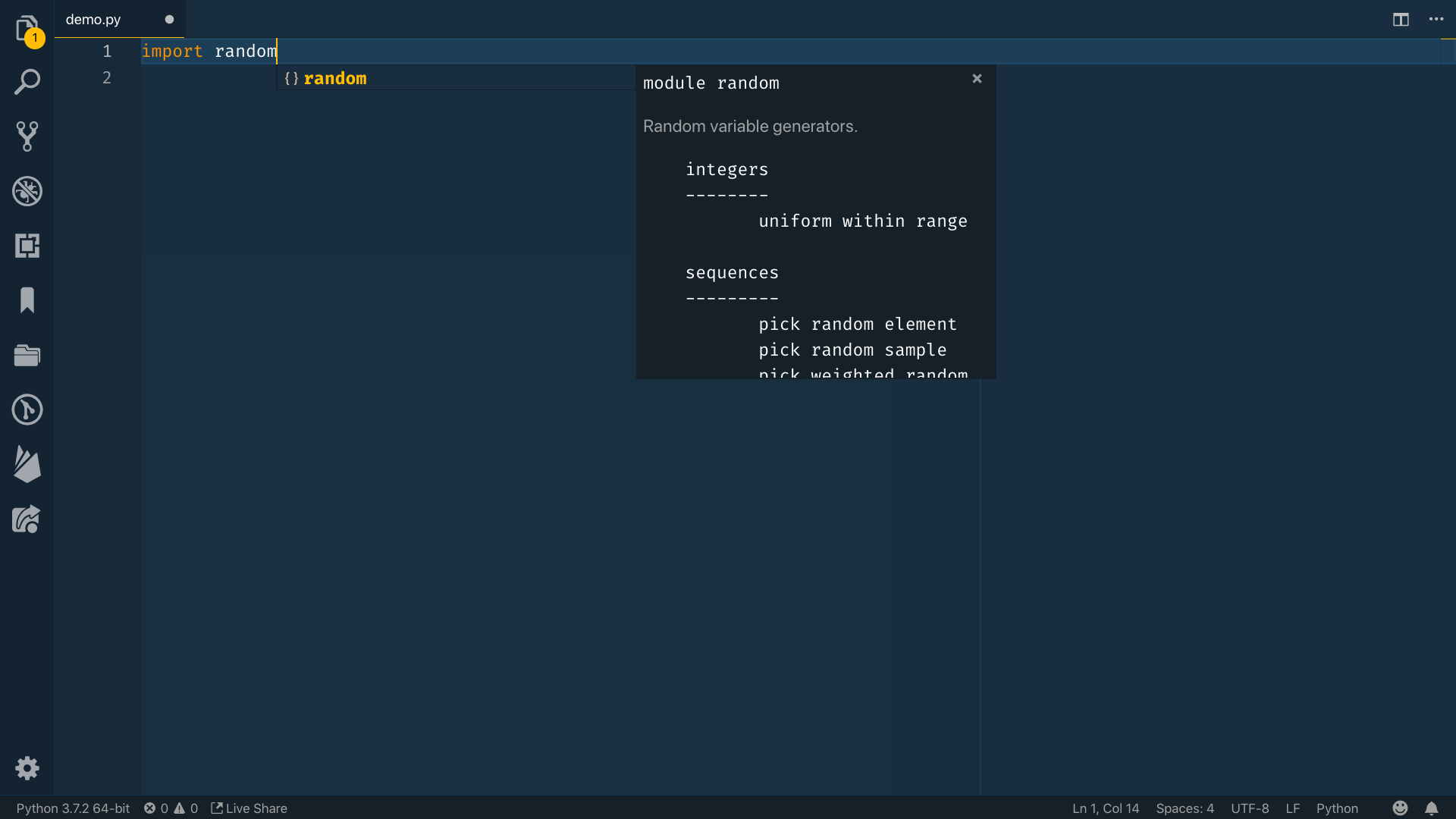 If you then start to use the random module, you’ll continue to get intellisense for functions that you can access with that module. 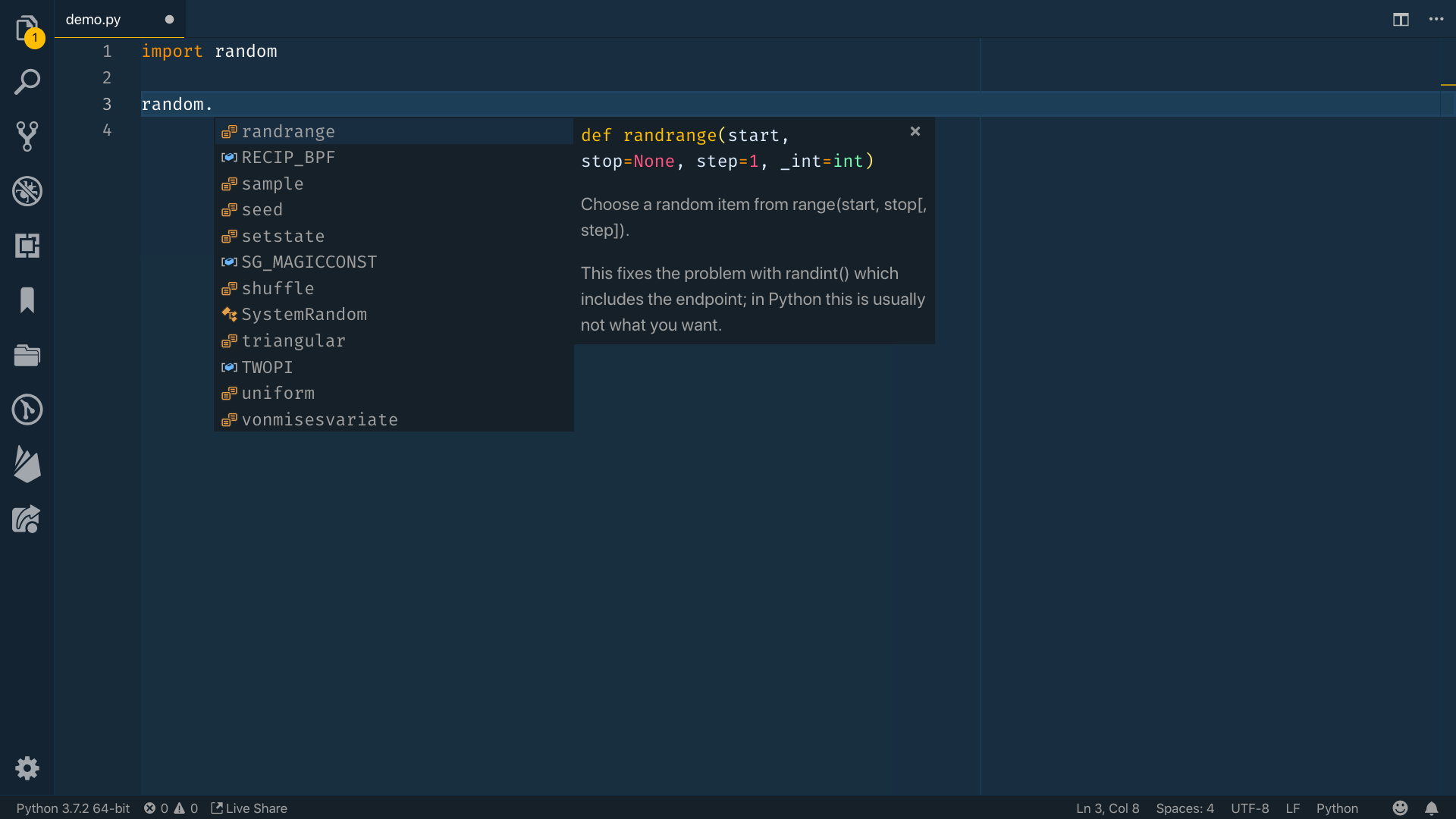 Lastly, you can hover on existing variables, module imports, and so on, for additional information whenever you need it. 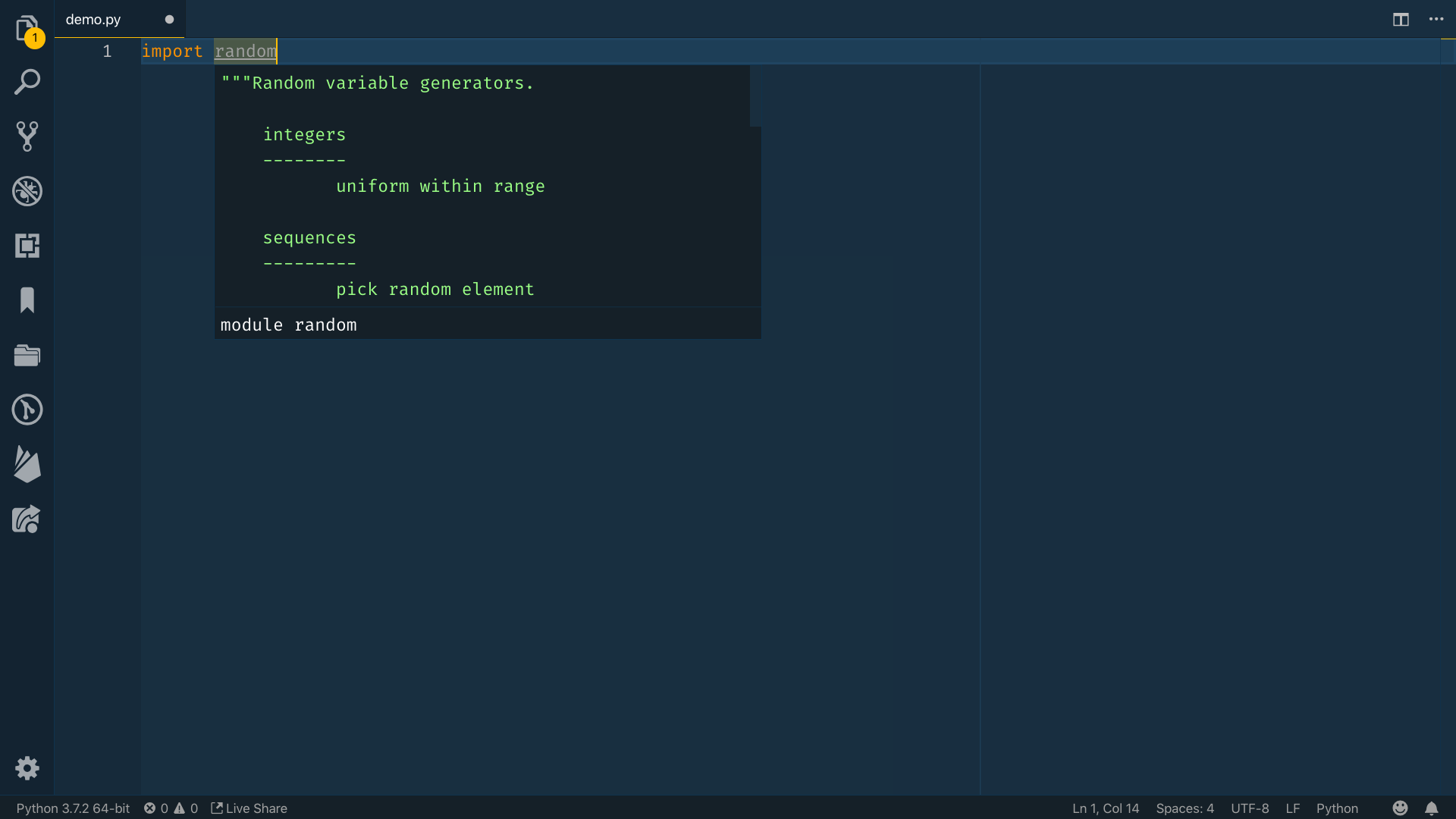 If you want to do more in your Python file, here’s a short snippet for the Bubble Sort algorithm. It calls the bubble_sort function and prints out the result. You can copy this code into your file:

With this new piece of code, let’s explore a new way to run our Python file. The typical first workflow for working with Python files is to save your file and then run that Python file in the terminal. With the Python extension, there are a few shortcuts to help with this process.

Inside of any Python file, you can right click in the editor and choose Run Python File In Terminal. This command will do each of the individual steps that we talked about before. 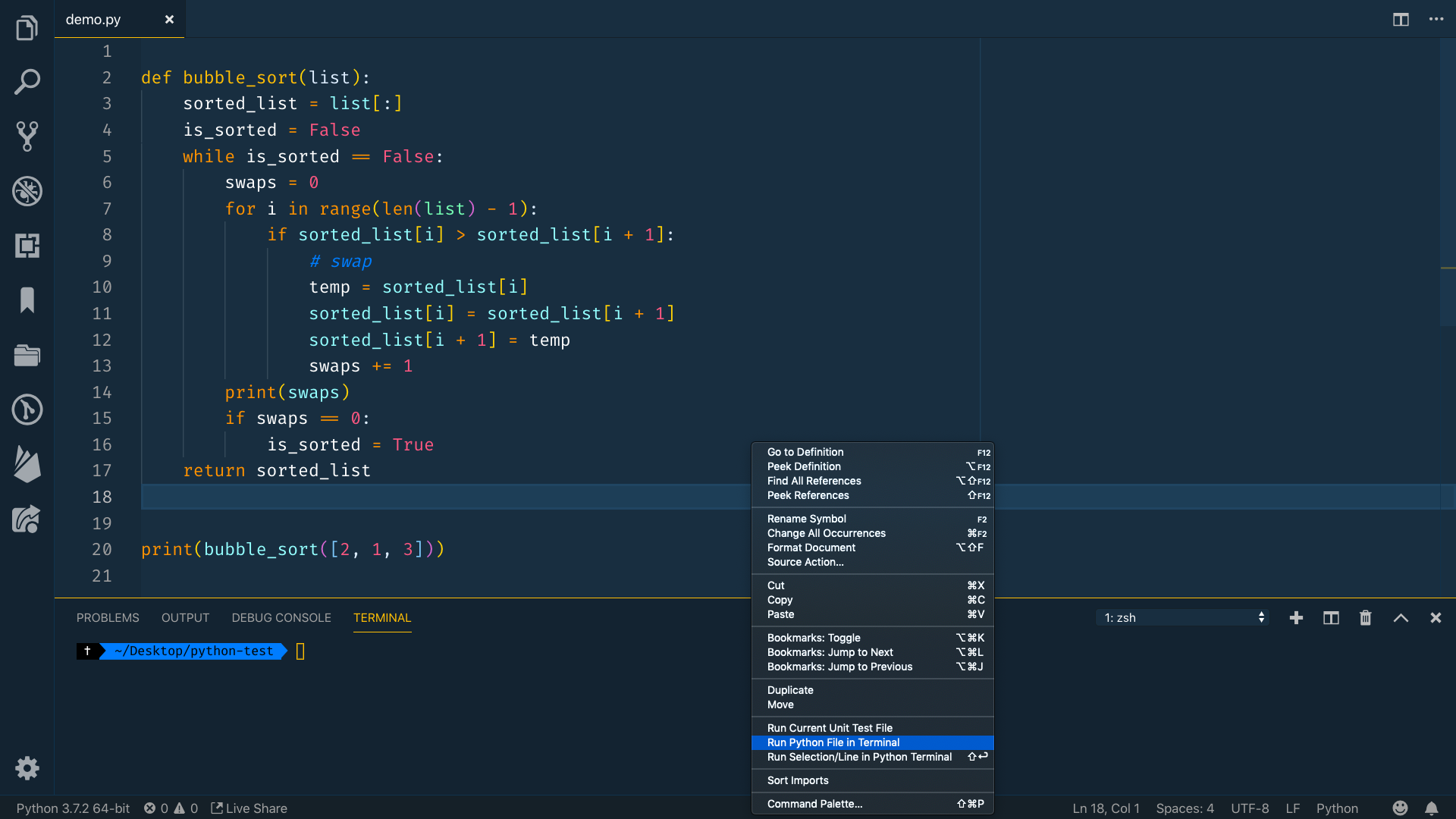 After using the shortcut, you can see the bubble_sort output in your console. 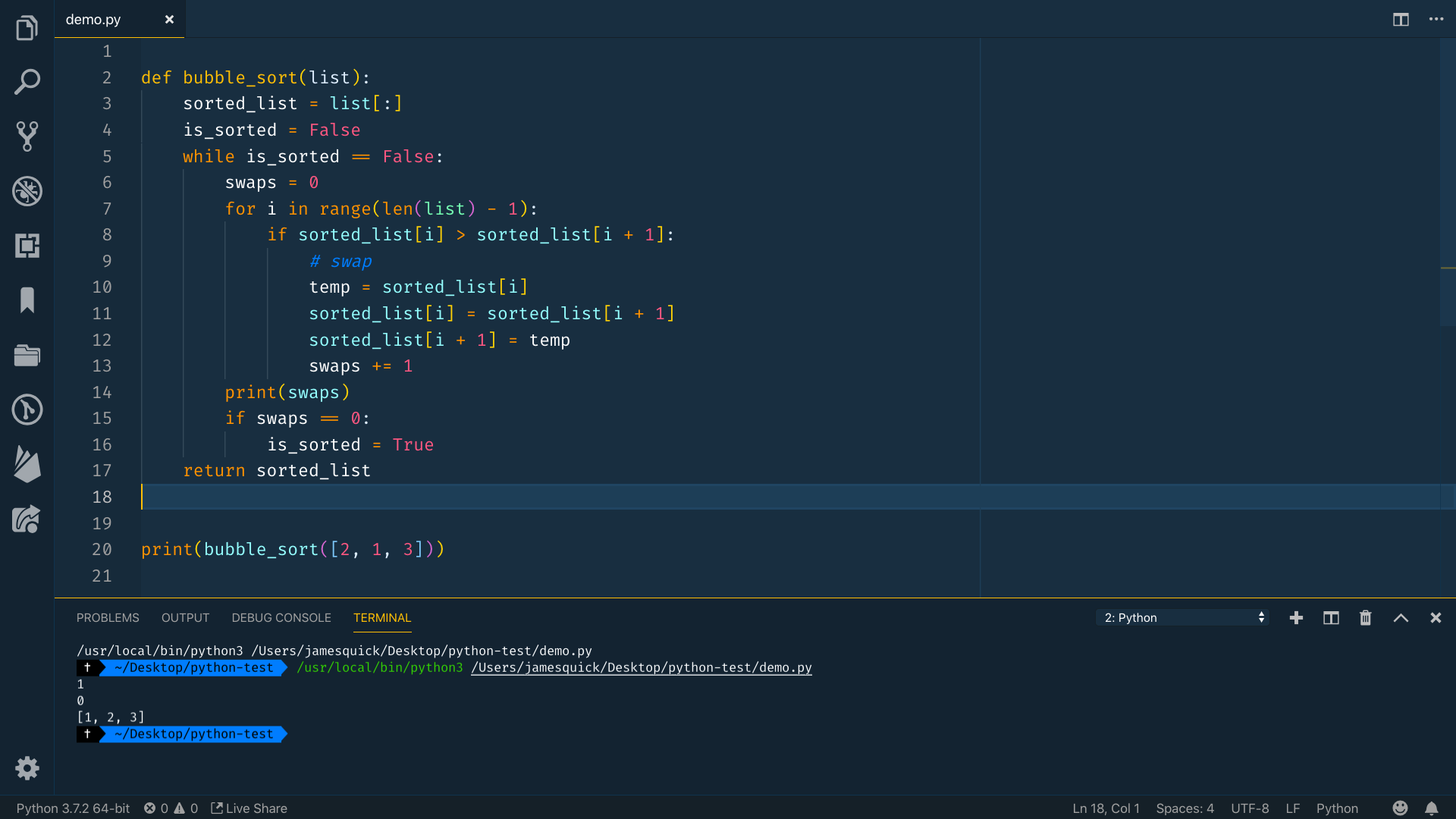 You also have a shortcut to open the Python REPL where you can quickly type Python code directly into your console and see the output. Open the command palette using the shortcut CMD+SHIFT+P on Mac or CTRL+SHIFT+P on Windows and select Python Start REPL. 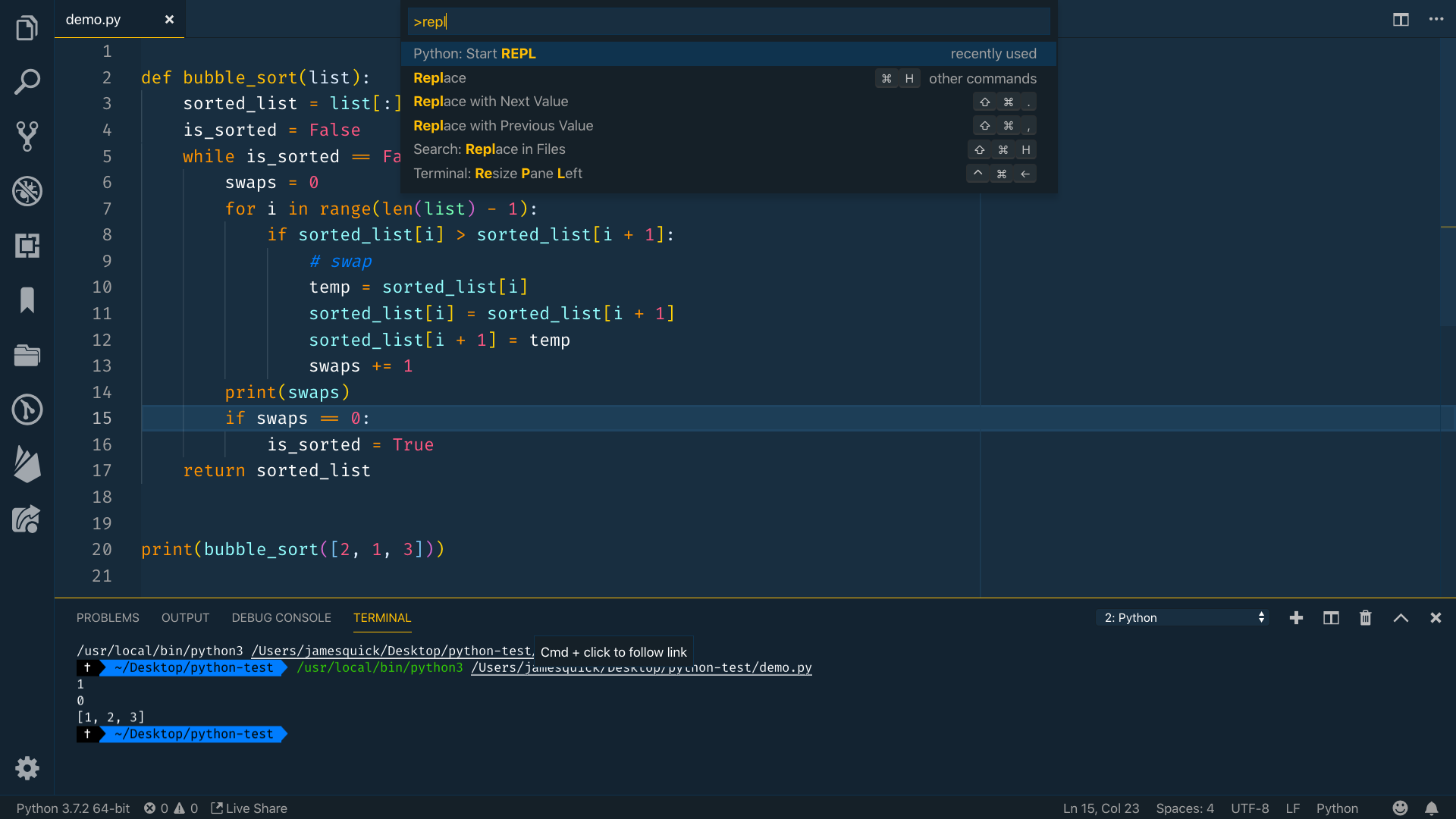 After typing in a print command, you will see Hello World immediately displayed in the console. 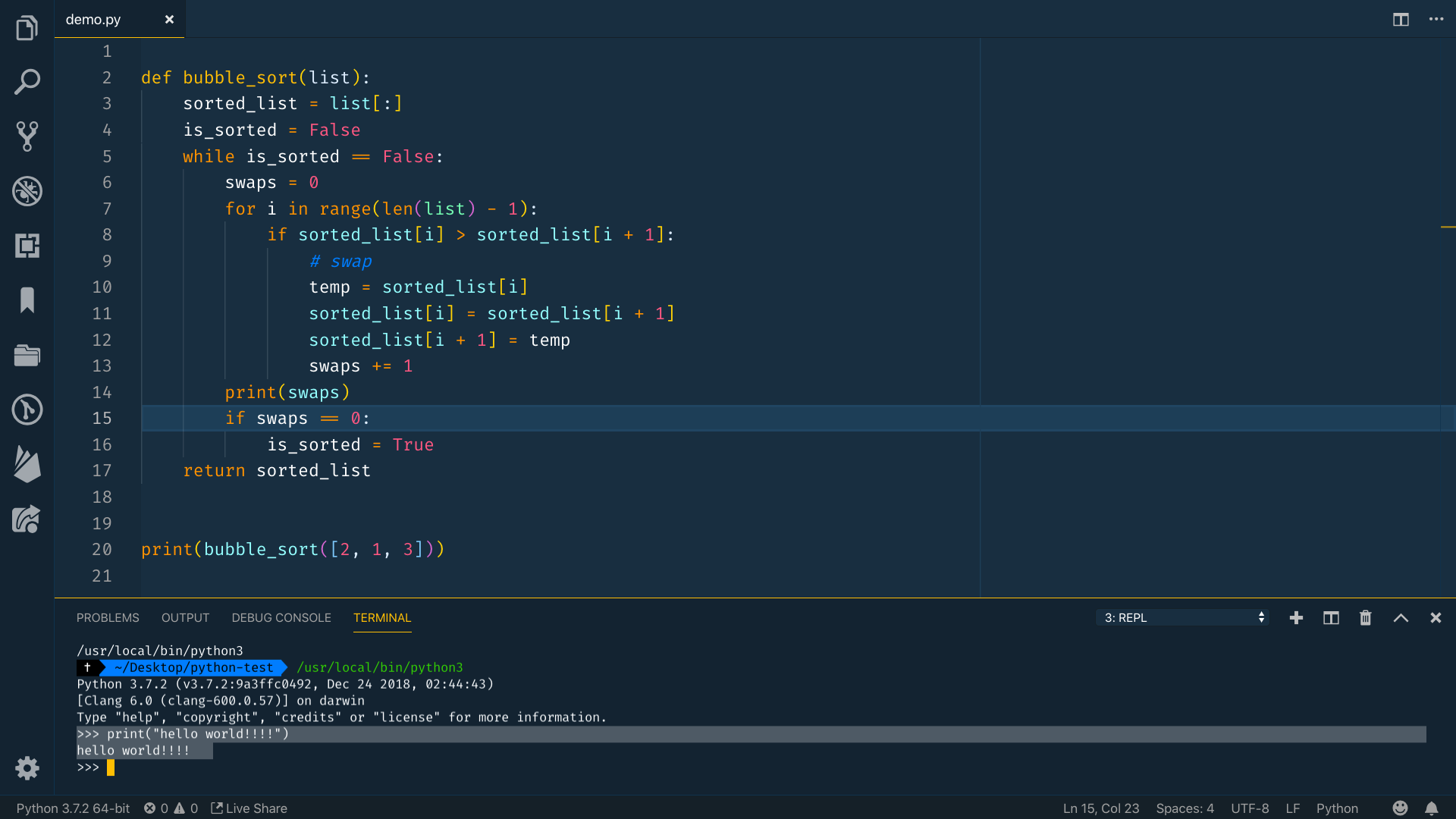 Python is an incredibly popular language with strong support in Visual Studio Code. By installing the Python extension, you’ll get Python intellisense, auto-completion, and other useful miscellaneous shortcuts.