Assuming that you’ve used several apps over the years, there is a very high chance that you have interacted with apps that provide some form of voice experience. It could be an app with text-to-speech functionality, like reading your text messages or notifications aloud. It could also be an app with voice recognition functionality like Siri or Google Assistant.

With the advent of HTML5, there has been a very fast growth in the number of API available on the web platform. Over the years, we have come across API such as WebSocket, File, Geolocation, Notification, Battery, Vibration, DeviceOrientation, WebRTC, etc. Some of these API have gained very high support across various browsers.

There are a couple of API known as the Web Speech API that have been developed to make it easy to seamlessly build varying kinds of voice applications and experiences for the web. These API are still pretty experimental, although there is increasing support for most of them across all the modern browsers.

The Web Speech API is broken into two major interfaces:

In this tutorial, you will use the SpeechSynthesis interface to build a text-to-speech app. Here is a demo screenshot of what the app will look like (without the sound):

Getting a reference to a SpeechSynthesis object can be done with a single line of code:

It is very useful to check if SpeechSynthesis is supported by the browser before using the functionality it provides. The following code snippet shows how to check for browser support:

In this step you will build on your already existing code to get the available speech voices. The getVoices() method returns a list of SpeechSynthesisVoice objects representing all the available voices on the device.

Take a look at the following code snippet:

In the above snippet, you get the list of available voices on the device, and filter the list using the langRegex regular expression to ensure that we get voices for only English speakers. Finally, you loop through the voices in the list and log the properties of each to the console.

In this step you will construct speech utterances by using the SpeechSynthesisUtterance constructor and setting values for the available properties. The following code snippet creates a speech utterance for reading the text "Hello World".

We have seen the basic aspects of the SpeechSynthesis interface. We will now start building our text-to-speech application. Before we begin, ensure that you have Node and NPM installed on your machine.

Run the following commands on your terminal to setup a project for the app and install the dependencies.

Install dependencies needed for the project:

Modify the "scripts" section of the package.json file to look like the following snippet:

Now that you have initialized a project for the application, you will proceed to setup a server for the app using Express.

Create a new server.js file and add the following content to it:

Here, you set up a Node server using Express. You enabled CORS (Cross-Origin Request Sharing) using the cors() middleware. You also use the express.static() middleware to serve static files from the /public directory in the project root. This will enable you to serve the index page that you will create soon.

Finally, you set up a GET /api/quote route for fetching a random quote from the QuotesOnDesign API service. You are using axios(a promise based HTTP client library) to make the HTTP request.

Here is what a sample response from the QuotesOnDesign API looks like:

When you fetch a quote successfully, the quote’s title and content are returned in the data field of the JSON response. Otherwise, a failure JSON response with a 500 HTTP status code would be returned.

Now you are down to the last piece that powers the app—the main script. Create a new main.js file in the public directory of your app and add the following content to it:

This code uses jQuery to execute a function when the DOM is loaded. You get a reference to the #app element and initialize some variables. You also declare a couple of empty functions that you will implement in the following sections. Finally, we call the initialize() function to initialize the application.

The iconProps variable contains a couple of properties that will be used for rendering Feather icons as SVG to the DOM.

With that code in place, you are ready to start implementing the functions. Modify the public/main.js file to implement the following functions:

The iconSVG(icon) function takes a Feather icon name string as argument (e.g 'play-circle') and returns the SVG markup for the icon. Check here to see the complete list of available feather icons. Also check the Feather documentation to learn more about the API.

The getVoices() function uses the SYNTHESIS object to fetch the list of all the available voices on the device. Then, it filters the list using a regular expression to get the voices of only English speakers.

Here in the fetchNewQuote() method, you first reset the app element and variables. You then pick a voice randomly using Math.random() from the list of voices stored in the VOICES variable. You use $.get() to make an AJAX request to the /api/quote endpoint, to fetch a random quote and render the quote data to the view alongside the voice controls.

The renderQuote(quote) method receives a quote object as its argument and adds the contents to the DOM. Finally, it updates the quote variables: QUOTE_TEXT and QUOTE_PERSON.

If you you look at the fetchNewQuote() function, you’ll notice that you made a call to the renderVoiceControls() function. This function is responsible for rendering the controls for playing, pausing, and stopping the voice output. It also renders the current voice in use and the language.

Make the following modifications to the public/main.js file to implement the renderVoiceControls() function:

Here, you create container elements for the voice controls and the controls pane. You use the iconSVG() function created earlier to get the SVG markup for the control buttons and create the button elements as well. You define the paused() and resumed() helper functions, which will be used while setting up the event handlers for the buttons.

Finally, you render the voice control buttons and the voice info to the DOM. It is also configured so only the Play button is shown initially.

Next, you will implement the click event handlers for the voice control buttons you defined in the previous section. Set up the event handlers as shown in the following code snippet:

Here, you set up the click event listeners for the voice control buttons. When the Play button is clicked, it starts speaking the utterances starting with the quoteUtterance and then the personUtterance. However, if the voice output is in a paused state, it resumes it.

You set VOICE_SPEAKING to true in the onstart event handler for the quoteUtterance. The app will also refresh and fetch a new quote when the personUtterance ends.

The Pause button pauses the voice output, while the Stop button ends the voice output and removes all utterances from the queue, using the cancel() method of the SpeechSynthesis interface. The code calls the updateVoiceControls() function each time to display the appropriate buttons.

You have made a couple of calls and references to the updateVoiceControls() function in the previous code snippets. This function is responsible for updating the voice controls to display the appropriate controls based on the voice state variables.

Go ahead and make the following modifications to the public/main.js file to implement the updateVoiceControls() function:

This code first checks if speechSynthesis is available on the window global object and is then assigned to the SYNTHESIS variable if it is available. Next, you set up an interval for fetching the list of available voices.

You are using an interval here because there is a known asynchronous behavior with SpeechSynthesis.getVoices() that makes it return an empty array at the initial call because the voices have not been loaded yet. The interval ensures that you get a list of voices before fetching a random quote and clearing the interval.

You have now successfully completed the text-to-speech app. You can start the app by running npm start on your terminal. The app should start running on port 5000 if it is available. Visit http://localhost:5000 your browser to see the app.

Once running, your app will look like the following screenshot: 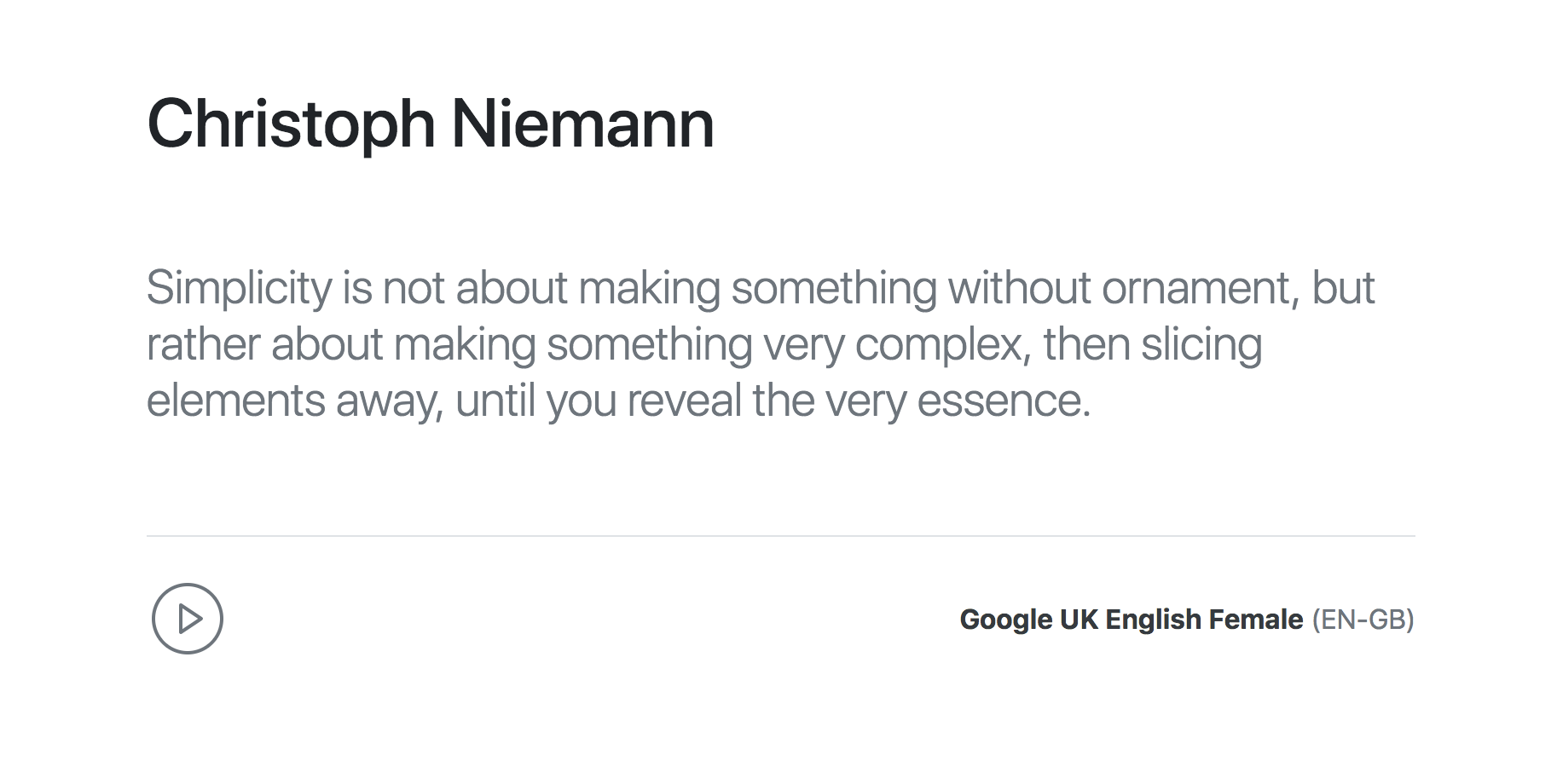 If you’d like to continue refining your app, there are a couple of interesting features you can still implement and experiment with such as volume controls, voice pitch controls, speed/rate controls, percentage of text uttered, etc.

The complete source code for this tutorial checkout the web-speech-demo repository on GitHub.