How To Configure a FreeIPA Client on Ubuntu 16.04

FreeIPA is an open-source security solution for Linux which provides account management and centralized authentication, similar to Microsoft’s Active Directory. FreeIPA is built on top of multiple open source projects including the 389 Directory Server, MIT Kerberos, and SSSD.

FreeIPA has clients for CentOS 7, Fedora, and Ubuntu 14.04/16.04. These clients make it fairly straightforward to add machines into your IPA domain. Other operating systems can authenticate against FreeIPA using SSSD or LDAP.

Throughout this tutorial, we’ll be using ipa-client.example.com as the example domain for your Ubuntu IPA client, and ipa.example.com for your CentOS IPA server (to match the prerequisite tutorial).

Before we start installing anything, we need to do a few things to make sure your Ubuntu server is ready to run the FreeIPA client. Specifically, we’ll set the server hostname, update the system packages, and check that the DNS records from the prerequisites have propagated.

To begin, the hostname of your Ubuntu server will need to match your fully qualified domain name (FQDN) for the FreeIPA client to work correctly. We’ll be using ipa-client.example.com as the FQDN throughout this tutorial.

If this is a new server, you can set the hostname when you create the server.

If you already have a server, you can use the hostname command instead, as below. Note that you must be root to change the hostname of an existing system because the hostname is a system parameter and cannot be changed by regular users.

If you are changing your server’s hostname with the hostname command, it is a good idea to also change it manually in the /etc/hostname file as well.

There should only be one line in the file with your server’s original hostname:

Change it to the full FQDN of your client.

Then save and close the file.

Once the hostname of your server is set correctly, update the package repositories.

Finally, we need to verify that the DNS names resolve properly. We can use the dig command for this. Dig is installed on Ubuntu by default.

First, use dig to check the A record.

If you have IPv6 enabled, you can test the AAAA record the same way.

We can also test the reverse lookup. This tests whether we can resolve the hostname from the IP address.

These should both return ipa-client.example.com.

Now that the server is prepared, we can install and configure the FreeIPA client package.

In Ubuntu 16.04, the FreeIPA client is included in the default repositories.

As the installer runs, it may prompt you for the Kerberos realm and Kerberos servers on a screen titled Configuring Kerberos Authentication. The FreeIPA installer will override these settings, but it’s best to enter them correctly here as well.

The Kerberos realm was configured when you installed the server. Generally it will be ipa.example.com The Kerberos server and administrative server should be the address of your IPA server. If you followed the prerequisite server tutorial, this will also be ipa.example.com. After these prompts, the ipa-client package will install.

Next, run the FreeIPA installation command. This will run a script that guides you through configuring FreeIPA to authenticate against your CentOS FreeIPA server.

The --mkhomedir flag tells FreeIPA to create home directories for IPA users when they log in to the machine for the first time. If you do not want this behavior, you can omit this flag.

The installer will first prompt you for the IPA domain. It is set when you configure the server.

Note: Systems with redundant IPA servers will most likely have a different IPA domain and IPA server name.

With a single server, failover will not work. FreeIPA will warn you about this, and you should enter yes to proceed.

Confirm that all the options are correct, and continue.

Next, enter an admin username. Here, we’ll just use the default IPA admin user that was created when the server was installed.

Finally, enter the password for your IPA admin user. This was set during the FreeIPA server configuration.

After you enter the password, the FreeIPA client will configure the system. The last line of output will be Client configuration complete. This indicates a successful install.

Now, we need to verify that our system shows up in the IPA web interface.

Navigate to your IPA web UI, which is https://ipa.example.com. Log in to the web UI with the IPA admin account you used earlier. You will see the following screen: 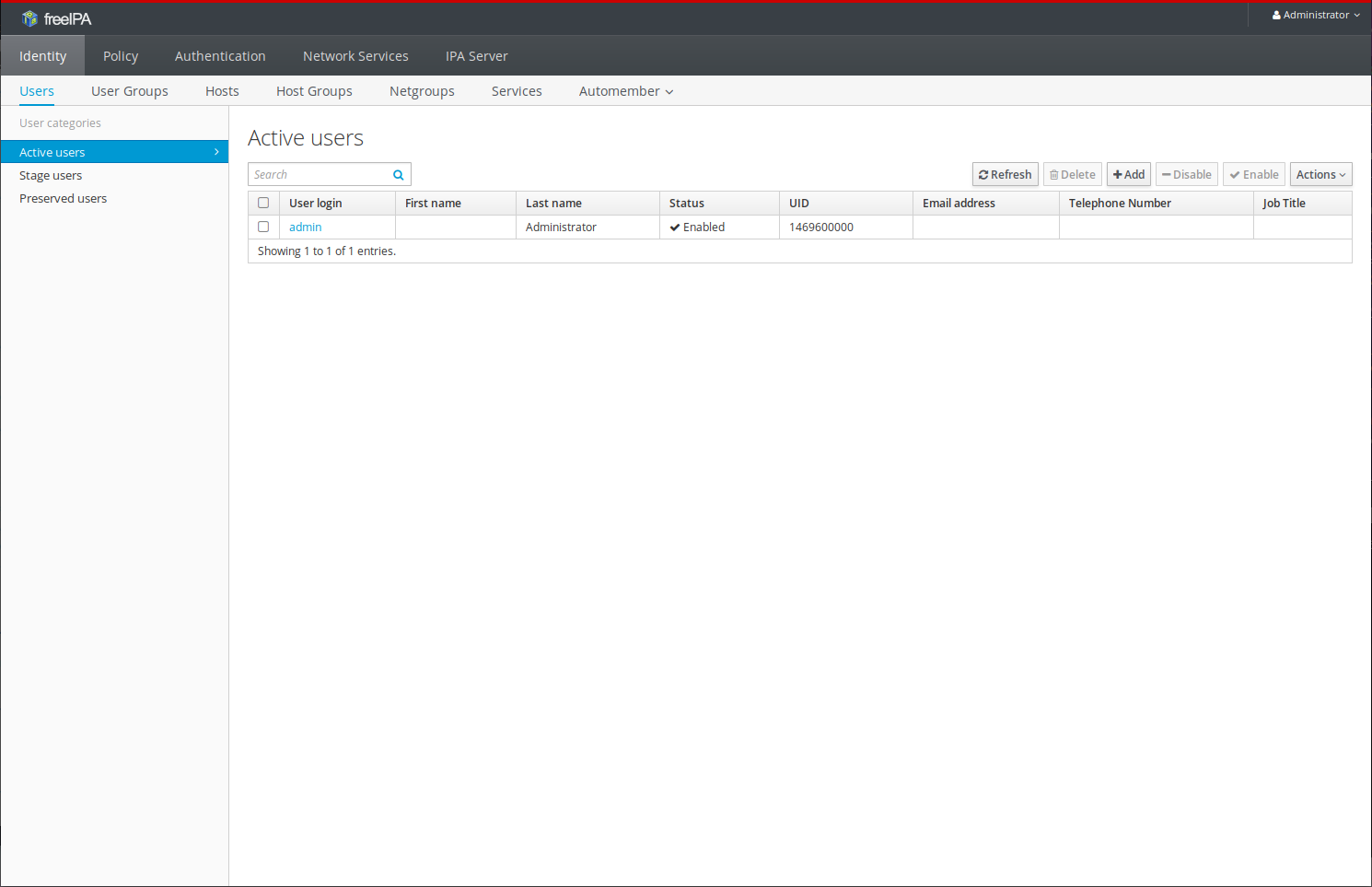 Navigate to the Hosts tab. You should see your IPA server listed as well as the client you just configured. Click on the entry for your IPA client. This will take you to an overview of the host.

From this screen, you can enter information about the client machine as well as managing groups and roles for the machine. 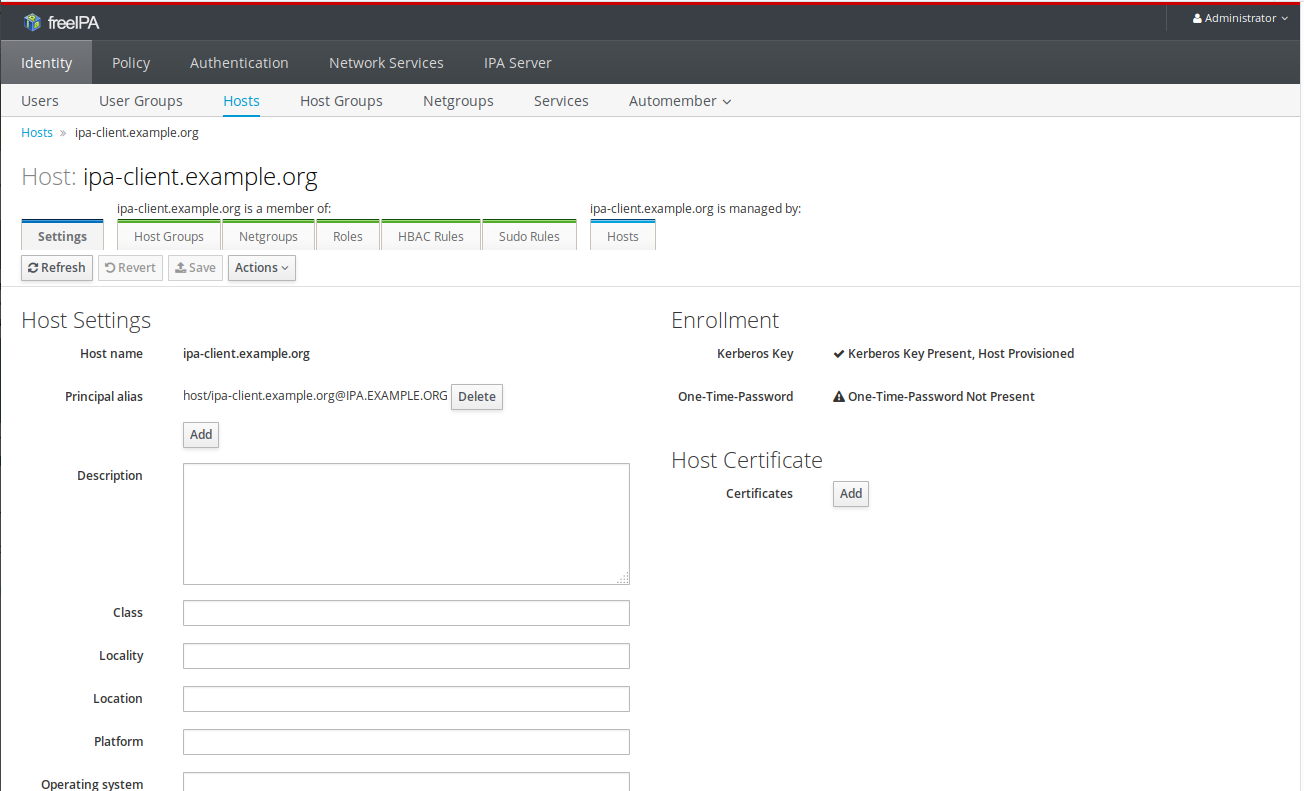 Note: By default, all IPA users may login to all machines within the IPA domain.

You can also try logging in to the machine with an IPA user from your local terminal.

You will log into your machine as an IPA user. You can exit back out of this connection once it’s successful.

IPA users will have basic access, but sudo is disabled. In the next step, we’ll enable sudo.

It is not necessary to modify the client configuration files to get enable sudo access; however, if you want to, you must configure sudo rules in the IPA web UI to allow access.

FreeIPA allows you to specify which users and user groups may run sudo commands on which machines. It is also possible to limit the commands a user may run with sudo, and which users they may impersonate.

In this tutorial, we will cover adding a simple rule that allows the admin group full sudo access to all machines. Note that the admin group, along with the other groups displayed below, exist by default in FreeIPA.

Your rule should now be active; however, it may take some time to propogate, and you may have to restart the sshd service for sudo rules to take affect. To do this, you can run systemctl restart sshd.service on the IPA client.

Once that’s done, let’s verify that we do have sudo access on the client machine. From your local machine, try logging in to the client with the IPA admin user. This user is by default in the admins group.

Once you’ve logged in, attempt to start an interactive sudo prompt.

The prompt should now change to root@ipa-client. You can simply type exit to return to the regular prompt.

If you are denied sudo access, you may want to reboot the machine and make sure that your sudo rule is configured properly.

With your machine configured to authenticate against FreeIPA, you can configure user and group access to your system from the IPA web UI or from its command line interface. FreeIPA has advanced functionality available, but for simpler configurations, you can simply add users and hosts providing a straightforward centralized authentication system.

FreeIPA is an extremely versatile authentication tool, and what you will need to do next depends largely on how you intend to use it. For further information, the FreeIPA website has a list of documentation resources.