How to Configure NTP for Use in the NTP Pool Project on Ubuntu 16.04

By Daniel Ziegenberg
Developer and author at DigitalOcean.

Accurate time keeping is critical for almost any service or software. Emails, loggers, event systems and schedulers, user authentication mechanisms, and services running on distributed platforms all need accurate timestamps to record events in chronological order. These services use the Network Time Protocol, or NTP, to synchronize the system clock with a trusted external source. This source can be an atomic clock, a GPS receiver, or another time server that already uses NTP.

This is where the NTP Pool Project project comes into play. It’s a huge worldwide cluster of time servers that provides easy access to known “good time” for tens of millions of clients around the world. It’s the default time server for Ubuntu and most of the other major Linux distributions, as well as many networked appliances and software applications.

The required bandwidth is relatively low and can be adjusted depending on the amount you can provide and where your server resides. Each client will only send a couple of UDP packets every 20 minutes, so most servers only receive about a dozen NTP packets per second, with spikes a couple of times a day of up to one hundred packets per second. This translates to bandwidth usage of 10-15Kb/sec with spikes of 50-120Kb/sec.

There are three basic requirements you must satisfy before joining the NTP Pool Project:

For most cloud-based servers, the first two requirements are usually met automatically. The third requirement emphasizes that joining the NTP Pool Project constitutes a long-term commitment. Of course, if your circumstances change, it’s fine to take a server out of the pool, but it will take a long time (mostly weeks, but sometimes months or even years) before the traffic completely vanishes.

The NTP package is not installed by default, so you’ll use the package manager to install it. First, update your packages:

If you’ve configured the firewall as specified in the prerequisites, you must allow UDP traffic on port 123 in order to communicate with the NTP pool:

For more on UFW, refer to How To Set Up a Firewall with UFW on Ubuntu.

NTP is now installed, but it’s configured to use the default NTP pool time servers. Lets pick some specific time servers instead.

The NTP Pool project asks operators who want to join the pool to choose good network-local time servers rather than using the default pool.ntp.org servers. This ensures that the NTP Pool Project remains reliable, fast, and healthy. When choosing your time source, you’ll want a stable network connection with no packet loss and as few hops as possible between the servers.

Each server is also a client. A Stratum 2 client receives time from an upstream Stratum 1 server, and provides time to downstream Stratum 3 servers or other clients. For NTP Pool Project members to work properly, the NTP daemon needs at least three servers configured. The project recommends a minimum of four, and no more than seven sources.

Warning: Don’t use servers that are not listed as OpenAccess unless you’ve received approval to do so.

Sort the list by the ISO code column and find one or two servers that are geographically close to your server’s data center. When the server’s Access Policy column states OpenAccess, you can use it without issue. If it says “RestrictedAccess”, click to open the entry and read the instructions noted in the AccessDetails field. Often, you’ll find that NotificationMessage is set to Yes, which means you have to craft an informal email directed to the address provided in ServerContact, informing the server operator about your desire to use this time server as a time source for your NTP Pool Project member.

Once you’ve identified the servers you’d like to use, click the link for each server in the ISO column and copy its host name or IP address. You’ll use these addresses in Step 3.

Next, select three or four servers from the Stratum 2 list, following the same process.

Once you have selected your time servers, it’s time to configure your NTP client to use them.

To use your server with the NTP pool, and configure your new time servers, you’ll need to make some modifications to your NTP daemon’s configuration. To do so, edit the /etc/ntp.conf file:

First, make sure a driftfile is configured. A driftfile stores the frequency offset between the system clock running at its nominal frequency, and the frequency required to remain in synchronization with correct time. It helps to achieve a stable and accurate time. You should find this at the top of your configuration file on a default installation:

Next, remove the default time source entries from the configuration. You’re looking for all lines which are of the pattern pool [0-3].ubuntu.pool.ntp.org iburst or pool ntp.ubuntu.com. If you’re using a default configuration, remove the highlighted lines:

Replace the lines you removed with the hand-picked servers you selected in the previous step, using the server keyword instead of the pool keyword.

Next, make sure the default configuration does not allow management queries. If you don’t, your server could be used in NTP reflection attacks, or could be vulnerable to ntpq and ntpdc queries that attempt to modify the state of the server. Check that the noquery option is added to the default restrict lines:

You can find more information about the other options in the official documentation.

Your NTP daemon configuration file now should look like the following, although your file may have additional comments, which you can safely disregard:

Save the file and exit the editor.

Now restart the NTP service and let your time server synchronize its clock to the upstream servers.

After a few minutes, check the health of your time server with the ntpq command:

The remote column tells you the hostname of the servers the NTP daemon is using, and the refid column tells you the source the servers are using. So for Stratum 1 servers, the refid field should show GPS, PPS, ACTS, or PTB, and Stratum 2 and higher servers will show the IP address of the upstream server. The st column shows the stratum, and delay, offset and jitter tell you about the quality of the time source. Lower values are better for these three fields.

Your time server is now able to serve time to the public. You can verify this by calling ntpdate from another host:

The output should look similar to this and it tells you it adjusted the time server and the offset:

You are now ready to register your NTP server with the NTP Pool Project so others can use it.

Step 4 — Adding the Server to the NTP Pool

Once logged in, you’ll see the simple interface for adding servers:

The next screen asks you to verify that it identified the region of your server. If it shows your server in a different region than you expect, use the Comment box to let them know. 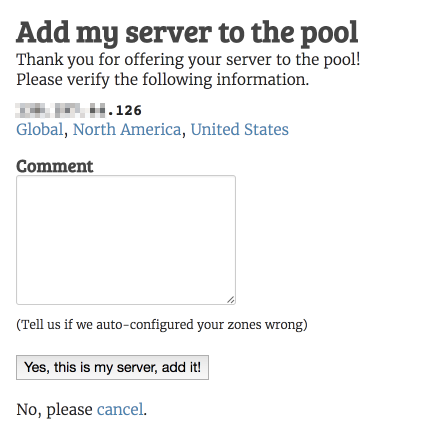 If you are happy, confirm the entry by clicking Yes, this is my server, add it!

Your server is now part of the NTP Pool Project. Visit http://www.pool.ntp.org/scores/your_server_ip to see information the NTP Pool’s monitoring system has collected about your server. It checks your server a few times per hour and displays offset data, alog with the score of your system. As long as your server is keeping good time and is reachable, the score will rise untill it reaches 20 points. Only servers with a score higher than 10 are used in the pool.

If you are having trouble getting your server to sync you might have a packet firewall in place dropping your outgoing packets on port 123. Take a look at How To Set Up a Firewall with UFW on Ubuntu to learn how to check the status of the firewall.

If the NTP Pool Project’s monitoring station can’t reach your NTP server and your server score is going down, or you can’t use your server to sync some other clock, you might have a packet firewall in place dropping your incoming traffic on port 123. Check your firewall status.

If you are certain that you have no firewall in place, or you have opened port 123 for both incoming and outgoing traffic, your server provider or another transit provider might be dropping your packets along the way. If you do not have the knowledge to solve those problems on your own, it’s best to turn to the community and reach for help. The NTP Pool Projects forum is a good place to start. You can also join the mailing list or send an emaill to the NTP Pool Project operator. Just be sure you can show all the steps you’ve already tried to resolve the issue before asking for help.

In this tutorial, you successfully set up your own time server and made it a member of the NTP Pool Project, serving time to the community. To keep in touch with the time-keeping community. join the NTP Pool Projects forum or the mailing list. Be sure to monitor your server’s score and make any adjustments necessary.

Thanks for writing this!

If folks are going to stand up a pool server, they can also add themselves to the NTP Project’s Servers web, at http://support.ntp.org/bin/view/Servers/WebHome