Not using Debian 10?Choose a different version or distribution.

The author selected the Electronic Frontier Foundation Inc to receive a donation as part of the Write for DOnations program.

DNSControl is an infrastructure-as-code tool that allows you to deploy and manage your DNS zones using standard software development principles, including version control, testing, and automated deployment. DNSControl was created by Stack Exchange and is written in Go.

Using DNSControl eliminates many of the pitfalls of manual DNS management, as zone files are stored in a programmable format. This allows you to deploy zones to multiple DNS providers simultaneously, identify syntax errors, and push out your DNS configuration automatically, reducing the risk of human error. Another common usage of DNSControl is to quickly migrate your DNS to a different provider; for example, in the event of a DDoS attack or system outage.

In this tutorial, you’ll install and configure DNSControl, create a basic DNS configuration, and begin deploying DNS records to a live provider. As part of this tutorial, we will use DigitalOcean as the example DNS provider. If you wish to use a different provider, the setup is very similar. When you’re finished, you’ll be able to manage and test your DNS configuration in a safe, offline environment, and then automatically deploy it to production.

Once you have these ready, log in to your server as your non-root user to begin.

DNSControl is written in Go, so you’ll start this step by installing Go to your server and setting your GOPATH.

You’ll also need to install Git, as this is required to allow Go to download and install the DNSControl software from it’s repository on GitHub.

Begin by updating the local package index to reflect any new upstream changes:

Then, install the golang-go and git packages:

After confirming the installation, apt will download and install Go and Git, as well as all of their required dependencies.

Next, you’ll configure the required path environment variables for Go. If you would like to know more about this, you can read this tutorial on Understanding the GOPATH. Start by editing the ~/.profile file:

Add the following lines to the very end of your file:

Once you have added these lines to the bottom of the file, save and close it. Then reload your profile by either logging out and back in, or sourcing the file again:

Now you’ve installed and configured Go, you can install DNSControl.

The go get command can be used to fetch a copy of the code, automatically compile it, and install it into your Go directory:

Once this is complete, you can check the installed version to make sure that everything is working:

Your output will look similar to the following:

If you see a dnscontrol: command not found error, double-check your Go path setup.

Now that you’ve installed DNSControl, you can create a configuration directory and connect DNSControl to your DNS provider in order to allow it to make changes to your DNS records.

In this step, you’ll create the required configuration directories for DNSControl, and connect it to your DNS provider so that it can begin to make live changes to your DNS records.

Firstly, create a new directory in which you can store your DNSControl configuration, and then move into it:

Note: This tutorial will focus on the initial set up of DNSControl; however for production use it is recommended to store your DNSControl configuration in a version control system (VCS) such as Git. The advantages of this include full version control, integration with CI/CD for testing, seamlessly rolling-back deployments, and so on.

If you plan to use DNSControl to write BIND zone files, you should also create the zones directory:

BIND zone files are a raw, standardized method for storing DNS zones/records in plain text format. They were originally used for the BIND DNS server software, but are now widely adopted as the standard method for storing DNS zones. BIND zone files produced by DNSControl are useful if you want to import them to a custom or self-hosted DNS server, or for auditing purposes.

However, if you just want to use DNSControl to push DNS changes to a managed provider, the zones directory will not be needed.

Next, you need to configure the creds.json file, which is what will allow DNSControl to authenticate to your DNS provider and make changes. The format of creds.json differs slightly depending on the DNS provider that you are using. Please see the Service Providers list in the official DNSControl documentation to find the configuration for your own provider.

This file tells DNSControl to which DNS providers you want it to connect.

You’ll need to provide some form of authentication for your DNS provider. This is usually an API key or OAuth token, but some providers require extra information, as documented in the Service Providers list in the official DNSControl documentation.

Warning: This token will grant access to your DNS provider account, so you should protect it as you would a password. Also, ensure that if you’re using a version control system, either the file containing the token is excluded (e.g. using .gitignore), or is securely encrypted in some way.

If you’re using DigitalOcean as your DNS provider, you can use the required OAuth token in your DigitalOcean account settings that you generated as part of the prerequisites.

If you have multiple different DNS providers—for example, for multiple domain names, or delegated DNS zones—you can define these all in the same creds.json file.

You’ve set up the initial DNSControl configuration directories, and configured creds.json to allow DNSControl to authenticate to your DNS provider and make changes. Next you’ll create the configuration for your DNS zones.

In this step, you’ll create an initial DNS configuration file, which will contain the DNS records for your domain name or delegated DNS zone.

dnsconfig.js is the main DNS configuration file for DNSControl. In this file, DNS zones and their corresponding records are defined using JavaScript syntax. This is known as a DSL, or Domain Specific Language. The JavaScript DSL page in the official DNSControl documentation provides further details.

To begin, create the DNS configuration file in the ~/dnscontrol directory:

Then, add the following sample configuration to the file:

This sample file defines a domain name or DNS zone at a particular provider, which in this case is your_domain hosted by DigitalOcean. An example A record is also defined for the zone root (@), pointing to the IPv4 address of the server that you’re hosting your domain/website on.

There are three main functions that make up a basic DNSControl configuration file:

You should configure NewRegistrar(), NewDnsProvider(), and D() accordingly using the Service Providers list in the official DNSControl documentation.

If you’re using DigitalOcean as your DNS provider, and only need to be able to make DNS changes (rather than authoritative nameservers as well), the sample in the preceding code block is already correct.

Once complete, save and close the file.

In this step, you set up a DNS configuration file for DNSControl, with the relevant providers defined. Next, you’ll populate the file with some useful DNS records.

Next, you can populate the DNS configuration file with useful DNS records for your website or service, using the DNSControl syntax.

Unlike traditional BIND zone files, where DNS records are written in a raw, line-by-line format, DNS records within DNSControl are defined as a function parameter (domain modifier) to the D() function, as shown briefly in Step 3.

A domain modifier exists for each of the standard DNS record types, including A, AAAA, MX, TXT, NS, CAA, and so on. A full list of available record types is available in the Domain Modifiers section of the DNSControl documentation.

The syntax for setting DNS records varies slightly for each record type. Following are some examples for the most common record types:

In order to begin adding DNS records for your domain or delegated DNS zone, edit your DNS configuration file:

Next, you can begin populating the parameters for the existing D() function using the syntax described in the previous list, as well as the Domain Modifiers section of the official DNSControl documentation. A comma (,) must be used in-between each record.

Once you have completed your initial DNS configuration, save and close the file.

In this step, you set up the initial DNS configuration file, containing your DNS records. Next, you will test the configuration and deploy it.

In this step, you will run a local syntax check on your DNS configuration, and then deploy the changes to the live DNS server/provider.

Firstly, move into your dnscontrol directory:

Next, use the preview function of DNSControl to check the syntax of your file, and output what changes it will make (without actually making them):

If the syntax of your DNS configuration file is correct, DNSControl will output an overview of the changes that it will make. This should look similar to the following:

If you see an error warning in your output, DNSControl will provide details on what and where the error is located within your file.

Warning: The next command will make live changes to your DNS records and possibly other settings. Please ensure that you are prepared for this, including taking a backup of your existing DNS configuration, as well as ensuring that you have the means to roll back if needed.

Finally, you can push out the changes to your live DNS provider:

You’ll see an output similar to the following:

Now, if you check the DNS settings for your domain in the DigitalOcean control panel, you’ll see the changes. 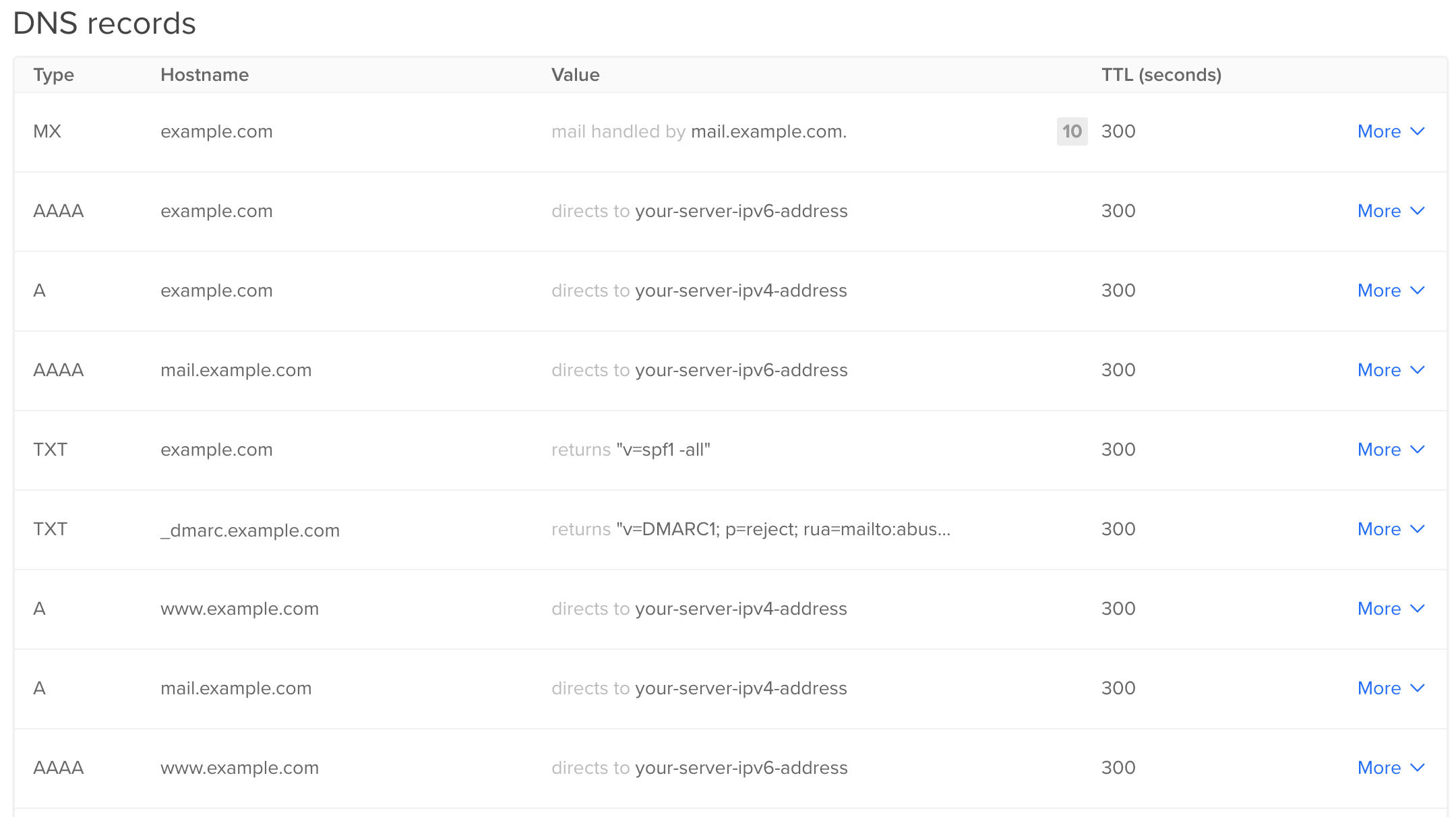 You can also check the record creation by running a DNS query for your domain/delegated zone using dig.

If you don’t have dig installed, you’ll need to install the dnsutils package:

Once you’ve installed dig, you can use it to make a DNS lookup for your domain. You’ll see that the records have been updated accordingly:

You’ll see output showing the IP address and relevant DNS record from your zone that was deployed using DNSControl. DNS records can take some time to propagate, so you may need to wait and run this command again.

In this final step, you ran a local syntax check of the DNS configuration file, then deployed it to your live DNS provider, and tested that the changes were made successfully.

In this article you set up DNSControl and deployed a DNS configuration to a live provider. Now you can manage and test your DNS configuration changes in a safe, offline environment before deploying them to production.

If you wish to explore this subject further, DNSControl is designed to be integrated into your CI/CD pipeline, allowing you to run in-depth tests and have more control over your deployment to production. You could also look into integrating DNSControl into your infrastructure build/deployment processes, allowing you to deploy servers and add them to DNS completely automatically.

If you wish to go further with DNSControl, the following DigitalOcean articles provide some interesting next steps to help integrate DNSControl into your change management and infrastructure deployment workflows:

IT Security Engineer, technical writer and occasional blogger from the United Kingdom, with an interest in security defence and blue team activities.