How To Install and Use Docker on CentOS 7

By finid
Developer and author at DigitalOcean.
English

Docker is an application that makes it simple and easy to run application processes in a container, which are like virtual machines, only more portable, more resource-friendly, and more dependent on the host operating system. For a detailed introduction to the different components of a Docker container, check out The Docker Ecosystem: An Introduction to Common Components.

There are two methods for installing Docker on CentOS 7. One method involves installing it on an existing installation of the operating system. The other involves spinning up a server with a tool called Docker Machine that auto-installs Docker on it.

In this tutorial, you’ll learn how to install and use it on an existing installation of CentOS 7.

Note: Docker requires a 64-bit version of CentOS 7 as well as a kernel version equal to or greater than 3.10. The default 64-bit CentOS 7 Droplet meets these requirements.

All the commands in this tutorial should be run as a non-root user. If root access is required for the command, it will be preceded by sudo. Initial Setup Guide for CentOS 7 explains how to add users and give them sudo access.

Now run this command. It will add the official Docker repository, download the latest version of Docker, and install it:

After installation has completed, start the Docker daemon:

The output should be similar to the following, showing that the service is active and running:

Lastly, make sure it starts at every server reboot:

If you want to avoid typing sudo whenever you run the docker command, add your username to the docker group:

You will need to log out of the Droplet and back in as the same user to enable this change.

If you need to add a user to the docker group that you’re not logged in as, declare that username explicitly using:

The rest of this article assumes you are running the docker command as a user in the docker user group. If you choose not to, please prepend the commands with sudo.

With Docker installed and working, now’s the time to become familiar with the command line utility. Using docker consists of passing it a chain of options and subcommands followed by arguments. The syntax takes this form:

To view all available subcommands, type:

As of Docker 1.11.1, the complete list of available subcommands includes:

To view the switches available to a specific command, type:

To view system-wide information, use:

The output, which should include the following, should indicate that Docker in working correctly:

You can search for images available on Docker Hub by using the docker command with the search subcommand. For example, to search for the CentOS image, type:

The script will crawl Docker Hub and return a listing of all images whose name match the search string. In this case, the output will be similar to this:

In the OFFICIAL column, OK indicates an image built and supported by the company behind the project. Once you’ve identifed the image that you would like to use, you can download it to your computer using the pull subcommand, like so:

To see the images that have been downloaded to your computer, type:

The output should look similar to the following:

As you’ll see later in this tutorial, images that you use to run containers can be modified and used to generate new images, which may then be uploaded (pushed is the technical term) to Docker Hub or other Docker registries.

The hello-world container you ran in the previous step is an example of a container that runs and exits, after emitting a test message. Containers, however, can be much more useful than that, and they can be interactive. After all, they are similar to virtual machines, only more resource-friendly.

As an example, let’s run a container using the latest image of CentOS. The combination of the -i and -t switches gives you interactive shell access into the container:

Your command prompt should change to reflect the fact that you’re now working inside the container and should take this form:

Important: Note the container id in the command prompt. In the above example, it is 59839a1b7de2.

Step 6 — Committing Changes in a Container to a Docker Image

When you start up a Docker image, you can create, modify, and delete files just like you can with a virtual machine. The changes that you make will only apply to that container. You can start and stop it, but once you destroy it with the docker rm command, the changes will be lost for good.

This section shows you how to save the state of a container as a new Docker image.

After installing MariaDB server inside the CentOS container, you now have a container running off an image, but the container is different from the image you used to create it.

To save the state of the container as a new image, first exit from it:

Then commit the changes to a new Docker image instance using the following command. The -m switch is for the commit message that helps you and others know what changes you made, while -a is used to specify the author. The container ID is the one you noted earlier in the tutorial when you started the interactive docker session. Unless you created additional repositories on Docker Hub, the repository is usually your Docker Hub username:

Note: When you commit an image, the new image is saved locally, that is, on your computer. Later in this tutorial, you’ll learn how to push an image to a Docker registry like Docker Hub so that it may be assessed and used by you and others.

After that operation has completed, listing the Docker images now on your computer should show the new image, as well as the old one that it was derived from:

In the above example, centos-mariadb is the new image, which was derived from the existing CentOS image from Docker Hub. The size difference reflects the changes that were made. And in this example, the change was that MariaDB server was installed. So next time you need to run a container using CentOS with MariaDB server pre-installed, you can just use the new image. Images may also be built from what’s called a Dockerfile. But that’s a very involved process that’s well outside the scope of this article. We’ll explore that in a future article.

After using Docker for a while, you’ll have many active (running) and inactive containers on your computer. To view the active ones, use:

You will see output similar to the following:

To view all containers — active and inactive, pass it the -a switch:

To view the latest container you created, pass it the -l switch:

Stopping a running or active container is as simple as typing:

The container-id can be found in the output from the docker ps command.

This section shows you how to push a Docker image to Docker Hub.

To create an account on Docker Hub, register at Docker Hub. Afterwards, to push your image, first log into Docker Hub. You’ll be prompted to authenticate:

If you specified the correct password, authentication should succeed. Then you may push your own image using:

It will take sometime to complete, and when completed, the output will be of this sort:

After pushing an image to a registry, it should be listed on your account’s dashboard, like that show in the image below. 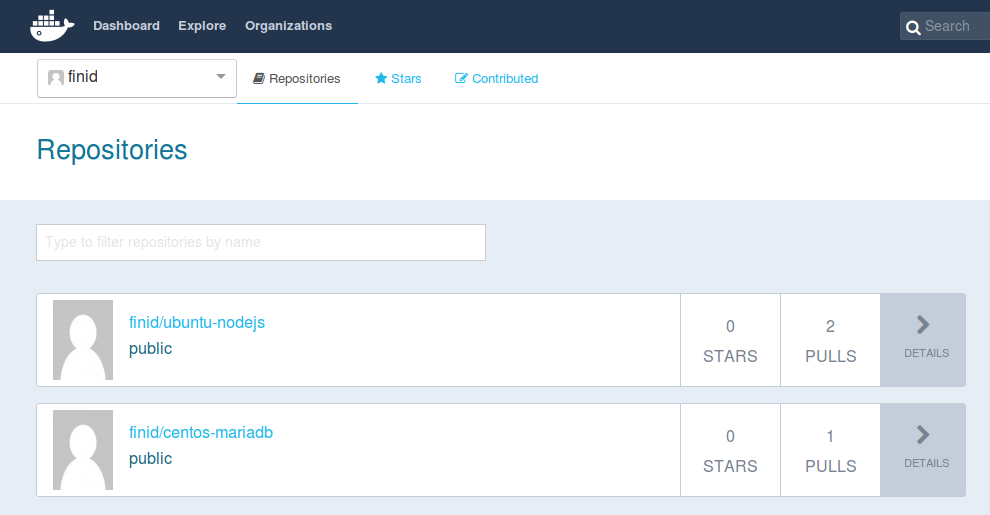 If a push attempt results in an error of this sort, then you likely did not log in:

There’s a whole lot more to Docker than has been given in this article, but this should be enough to getting you started working with it on CentOS 7. Like most open source projects, Docker is built from a fast-developing codebase, so make a habit of visiting the project’s blog page for the latest information.

Also check out the other Docker tutorials in the DO Community.

docker binary is not found anywhere after using this installation tutorial.

After installing docker, the service and “vendor preset” parameters were “disabled”. I had to search elsewhere to find out how to enable them. Finally figured out that I need to run the systemctl enable docker.service to enable docker service. Checking with my VM team to know how to enable vendor preset. Would help if you can include those steps as well.

Easy and straightforward. Thanks to the author.