How To Install Django and Set Up a Development Environment on Ubuntu 16.04

Django is a free and open-source web framework written in Python that adheres to the model template view (MTV) software architectural pattern. The MTV pattern is Django’s take on the model–view–controller (MVC) pattern. According to the Django Software Foundation, the model is the single definitive source of your data, the view describes the data that gets represented to the user via a Python callback function to a specific URL, and the template is how Django generates HTML dynamically.

Django’s core principles are scalability, re-usability and rapid development. It is also known for its framework-level consistency and loose coupling, allowing for individual components to be independent of one another. Don’t repeat yourself (DRY programming) is an integral part of Django principles.

In this tutorial, we will set up a Django development environment. We’ll install Python 3, pip 3, Django and virtualenv in order to provide you with the tools necessary for developing web applications with Django.

To install Python we must first update the local APT repository. In your terminal window, we’ll input the command that follows. Note that the -y flag answers “yes” to prompts during the upgrade process. Remove the flag if you’d like the upgrade to stop for each prompt.

When prompted to configure grub-pc, you can press ENTER to accept the default, or configure as desired.

It is recommended by the Django Software Foundation to use Python 3, so once everything is updated, we can install Python 3 by using the following command:

To verify the successful installation of Python 3, run a version check with the python3 command:

The resulting output will look similar to this:

Now that we have Python 3 installed, we will also need pip in order to install packages from PyPi, Python’s package repository.

To verify that pip was successfully installed, run the following command:

You should see output similar to this:

Now that we have pip installed, we have the ability to quickly install other necessary packages for a Python environment.

virtualenv is a virtual environment where you can install software and Python packages in a contained development space, which isolates the installed software and packages from the rest of your machine’s global environment. This convenient isolation prevents conflicting packages or software from interacting with each other.

To install virtualenv, we will use the pip3 command, as shown below:

Once it is installed, run a version check to verify that the installation has completed successfully:

We should see the following output, or something similar:

You have successfully installed virtualenv.

At this point, we can isolate our Django web application and its associated software dependencies from other Python packages or projects on our system.

There are three ways to install Django. We will be using the pip method of installation for this tutorial, but let’s address all of the available options for your reference.

While in the server’s home directory, we have to create the directory that will contain our Django application. Run the following command to create a directory called django-apps, or another name of your choice. Then navigate to the directory.

While inside the django-apps directory, create your virtual environment. Let’s call it env.

You’ll know it’s activated once the prefix is changed to (env), which will look similar to the following depending on what directory you are in:

Within the environment, install the Django package using pip. Installing Django allows us to create and run Django applications. To learn more about Django, read our tutorial series on Django Development.

With Django installed on your server, we can move on to creating a test project to make sure everything is working correctly.

To test the Django installation, we will be creating a skeleton web application.

First, if applicable, we’ll need to open the port we’ll be using in our server’s firewall. If you are using UFW (as detailed in the initial server setup guide), you can open the port with the following command:

Note: Although a default file was generated, you still have the ability to tweak the wsgi.py at any time to fit your deployment needs.

You can use your favorite text editor to add your ip address. For example, if you’re using nano, just simply run the following command:

You can save the change and exit nano by holding down the CTRL + x keys and then pressing the y key.

With this completed, be sure to navigate back to the directory where manage.py is located:

Once the page loads, you’ll receive a webpage that is similar to the following: 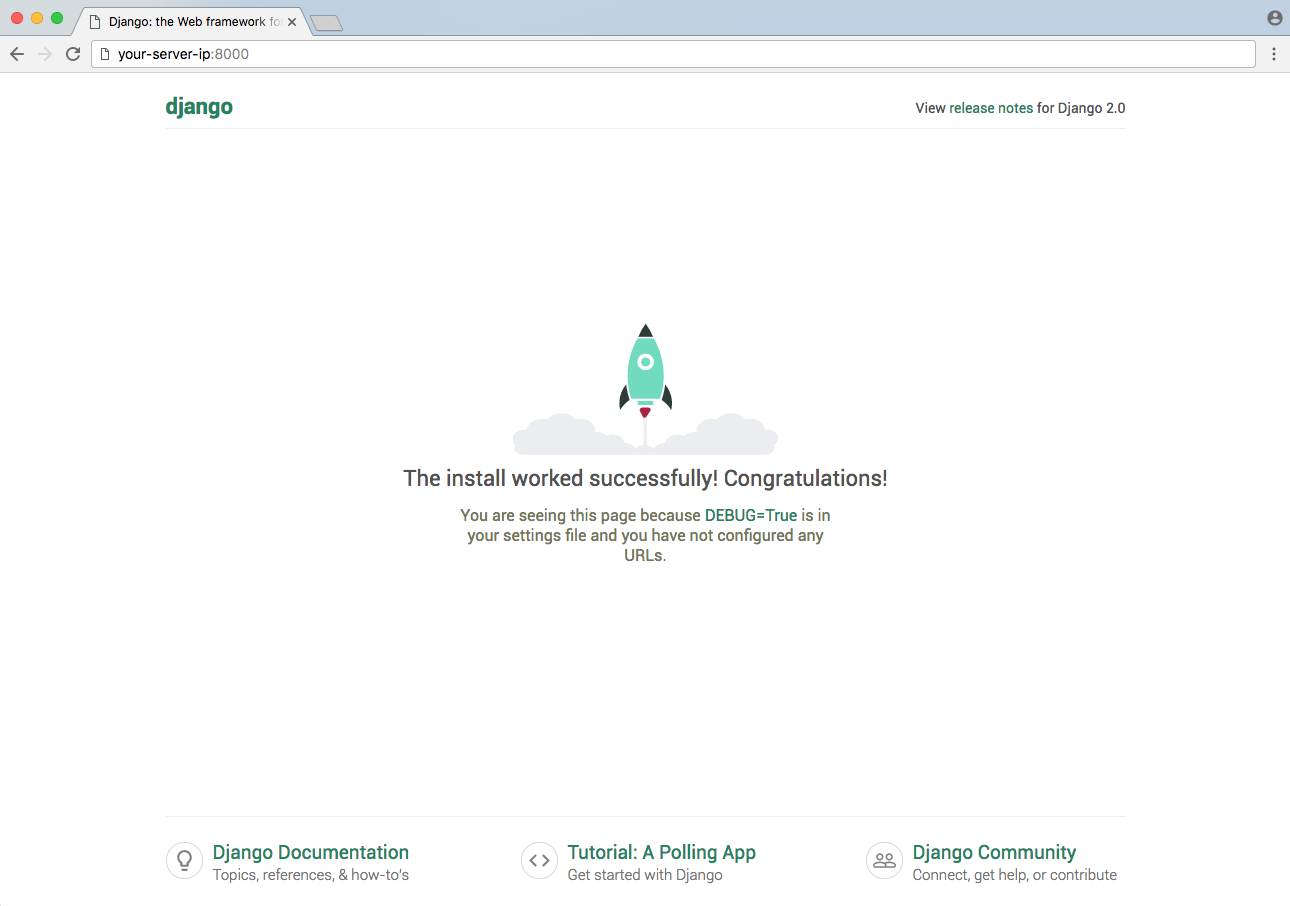 When you are done with testing your app, you can press CTRL + C to stop the runserver command. This will return you to the your programming environment.

In this tutorial you have successfully upgraded to the latest version of Python 3 available to you via the Ubuntu APT repository. You’ve also installed pip 3, virtualenv, and django.

You now have the tools needed to get started building Django web applications.

how to get to production follow by this set up ?

Nicely explained for beginners. Thanks for sharing.

thank you for this. great help .

i’m using an amazon Google Cloud Platform server and when i try to run the server with my IP (i verified my ip also with curl ipecho.net/plain ; echo), i get this error:

Great!! Thanks for your guidelines. It worked in one go!!!

Thanks for your guide. I have a problem: i’m using an amazon EC2 server and when i try to run the server with my IP (i verified my ip also with curl ipecho.net/plain ; echo), i get this error:

I’m unable to start the server as shown above…

Thanks and Regards, Krishna