How To Set Up Cherokee on Ubuntu 12.10/Debian
View

By Lisa Tagliaferri
Developer and author at DigitalOcean.

Not using Debian 8?Choose a different version or distribution.

A versatile programming language, Python can be used for many different programming projects. With a name inspired by the British comedy group Monty Python, the development team wanted to make Python a language that was fun to use and first published it in 1991. Easy to set up, and written in a relatively straightforward style with immediate feedback on errors, Python is a great choice for beginners and experienced developers alike. Python 3 is the most current version of the language and is considered to be the future of Python.

This tutorial will guide you through installing Python 3 on your local Linux machine and setting up a programming environment via the command line. This tutorial will explicitly cover the installation procedures for and Debian 8, but the general principles apply to any other distribution of Debian Linux.

You will need a computer with Debian 8 or another version of Debian Linux installed, as well as have administrative access to that machine and an internet connection.

We’ll be completing our installation and setup on the command line, which is a non-graphical way to interact with your computer. That is, instead of clicking on buttons, you’ll be typing in text and receiving feedback from your computer through text as well. The command line, also known as a shell, can help you modify and automate many of the tasks you do on a computer every day, and is an essential tool for software developers. There are many terminal commands to learn that can enable you to do more powerful things. The article “[An Introduction to the Linux Terminal] (https://www.digitalocean.com/community/tutorials/an-introduction-to-the-linux-terminal)” can get you better oriented with the terminal.

On Debian 8, you can open the Menu in the lower left-hand corner of your screen, and search for “terminal” in the search bar. Click on Terminal to open the program. You can also hit the CTRL, ALT, and T keys on your keyboard at the same time to open the Terminal application automatically. 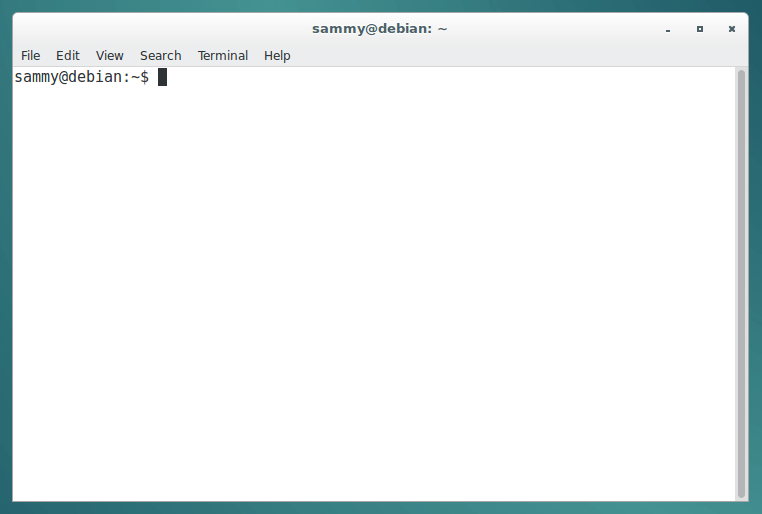 Debian 8, and other versions of Debian Linux ship with both Python 3 and Python 2 pre-installed. To make sure that our versions are up-to-date, let’s update and upgrade the system with apt-get:

The -y flag will confirm that we are agreeing for all items to be installed, but depending on your version of Linux, you may need to confirm additional prompts as your system updates and upgrades.

Once the process is complete, we can check the version of Python 3 that is installed in the system by typing:

A tool for use with Python, pip installs and manages programming packages we may want to use in our development projects. You can install Python packages by typing:

Here, package_name can refer to any Python package or library, such as Django for web development or NumPy for scientific computing. So if you would like to install NumPy, you can do so with the command pip3 install numpy.

There are a few more packages and development tools to install to ensure that we have a robust set-up for our programming environment:

Once Python is set up, and pip and other tools are installed, we can set up a virtual environment for our development projects.

Step 2 — Setting Up a Virtual Environment

Virtual environments enable you to have an isolated space on your computer for Python projects, ensuring that each of your projects can have its own set of dependencies that won’t disrupt any of your other projects.

Setting up a programming environment provides us with greater control over our Python projects and over how different versions of packages are handled. This is especially important when working with third-party packages.

You can set up as many Python programming environments as you want. Each environment is basically a directory or folder in your computer that has a few scripts in it to make it act as an environment.

We need to first install the venv module, part of the standard Python 3 library, so that we can create virtual environments for us. Let’s install venv by typing:

With this installed, we are ready to create environments. Let’s choose which directory we would like to put our Python programming environments in, or we can create a new directory with mkdir, as in:

Once you are in the directory where you would like the environments to live, you can create an environment by running the following command:

Essentially, this sets up a new directory that contains a few items which we can view with the ls command:

Together, these files work to make sure that your projects are isolated from the broader context of your local machine, so that system files and project files don’t mix. This is good practice for version control and to ensure that each of your projects has access to the particular packages that it needs. Python Wheels is a built-package format for Python that can speed up your software production by reducing the number of times you need to compile. You’ll find this in each of the lib directories.

To use this environment, you need to activate it, which you can do by typing the following command that calls the activate script:

This prefix lets us know that the environment my_env is currently active, meaning that when we create programs here they will use only this particular environment’s settings and packages.

After following these steps, your virtual environment is ready to use.

Now that we have our virtual environment set up, let’s create a simple “Hello, World!” program. This will make sure that our environment is working and gives us the opportunity to become more familiar with Python if we aren’t already.

To do this, we’ll open up a command-line text editor such as nano and create a new file:

Once the text file opens up in the terminal window we’ll type out our program:

Exit nano by typing the control and x keys, and when prompted to save the file press y.

Once you exit out of nano and return to your shell, let’s run the program:

The hello.py program that you just created should cause your terminal to produce the following output:

To leave the environment, simply type the command deactivate and you will return to your original directory.

Congratulations! At this point you have a Python 3 programming environment set up on your local Debian Linux machine and can begin a coding project!

With your local machine ready for software development, you can continue to learn more about coding in Python by following “Understanding Data Types in Python 3” and “How To Use Variables in Python 3”.

Nice! Bookmarking this page, and a lot of your tutorials, to use a template for making Dockerfiles when creating Debian containers for Python3 dev environment.

Thank you so much!