How To Install the Munin Monitoring Tool on Ubuntu 14.04

By finid
Developer and author at DigitalOcean.

Munin is a system, network, and infrastructure monitoring application that provides information in graphs through a web browser. It is designed around a client-server architecture and can be configured to monitor the machine it’s installed on (the Munin master) and any number of client machines, which in Munin parlance, are called Munin nodes.

In this article, we’ll install and configure Munin to monitor the server it’s installed on and one node. To install Munin on multiple nodes, just follow the instructions for creating a node on each system.

All the commands in this tutorial should be run as a non-root user. If root access is required for the command, it will be preceded by sudo. Initial Server Setup with Ubuntu 14.04 explains how to add users and give them sudo access.

We will start working on the Munin master first. Before installing Munin, a few dependencies need to be installed.

Though Munin can function with most popular Web servers like Nginx and Lighttpd, it is, by default, designed to work with the Apache Web server. So be sure that Apache is installed and configured on the Munin master. If it’s not already installed, do so using:

To ensure that the dynazoom functionality, which is responsible for zooming into the generated graphs, work properly on click, install the following:

After installing those two packages, the fcgid module should be enabled. To double-check, type:

The output should be:

If the output is blank, then it’s not enabled. You may then enable it using:

When executing the apachectl command, you can ignore the following warning:

Apache will still work with Munin with this warning.

The rest of the configuration that will make graph zooming work properly will be covered in Step 3.

Installation packages for Munin are available in the official Ubuntu repository, so they can be installed using the distribution’s package manager. In this step, you’ll install the Munin master package. The version in the repository is the latest stable release.

To install it to monitor the server it’s installed on, type:

The main configuration file is made up of at least two sections — a global and at least one host section. Optionally, there can be a group section. Host and group sections start with their respective names in square brackets. This file contains variable definitions, directives that govern how Munin monitors servers and services, and which servers to monitor.

Look for these lines and uncomment them — remove the # sign that precedes them. The dbdir stores all of the rrdfiles containing the actual monitoring information; htmldir stores the images and site files; logdir maintains the logs; rundir holds the state files; and tmpldir is the location for the HTML templates. Be sure to change the htmldir from /var/cache/munin/www to your web directory. In this example, we’ll be using /var/www/munin:

Since the htmldir does not exist, let’s create and chown it so that it’s owned by the munin system user:

Finally, in munin.conf, look for the first host tree. It defines how to access and monitor the host machine. It should read:

Change the name of that tree to one that uniquely identifies the server. This the name that will be displayed in the Munin web interface. In this example, we’ll be using MuninMaster, but you could also use the server’s hostname:

That’s all for the configuration file, so save and close it.

At the very top of the file, modify the first line so that it reflects the htmldir path you specified in munin.conf and created previously. Based on the directory path used in this article, it should read as follows, which makes it so you can access Munin’s web interface by appending munin to the server’s IP address or domain hosted on the server:

Next, look for the Directory section, and change the directory to /var/www/munin. Also comment out (or delete) the first four lines and then add two new directives so that it reads:

Look for the penultimate location section, comment out or delete the first two lines and add two new ones so that it reads:

Do the same to the last location section:

Save and close the file. Then restart Apache and Munin. 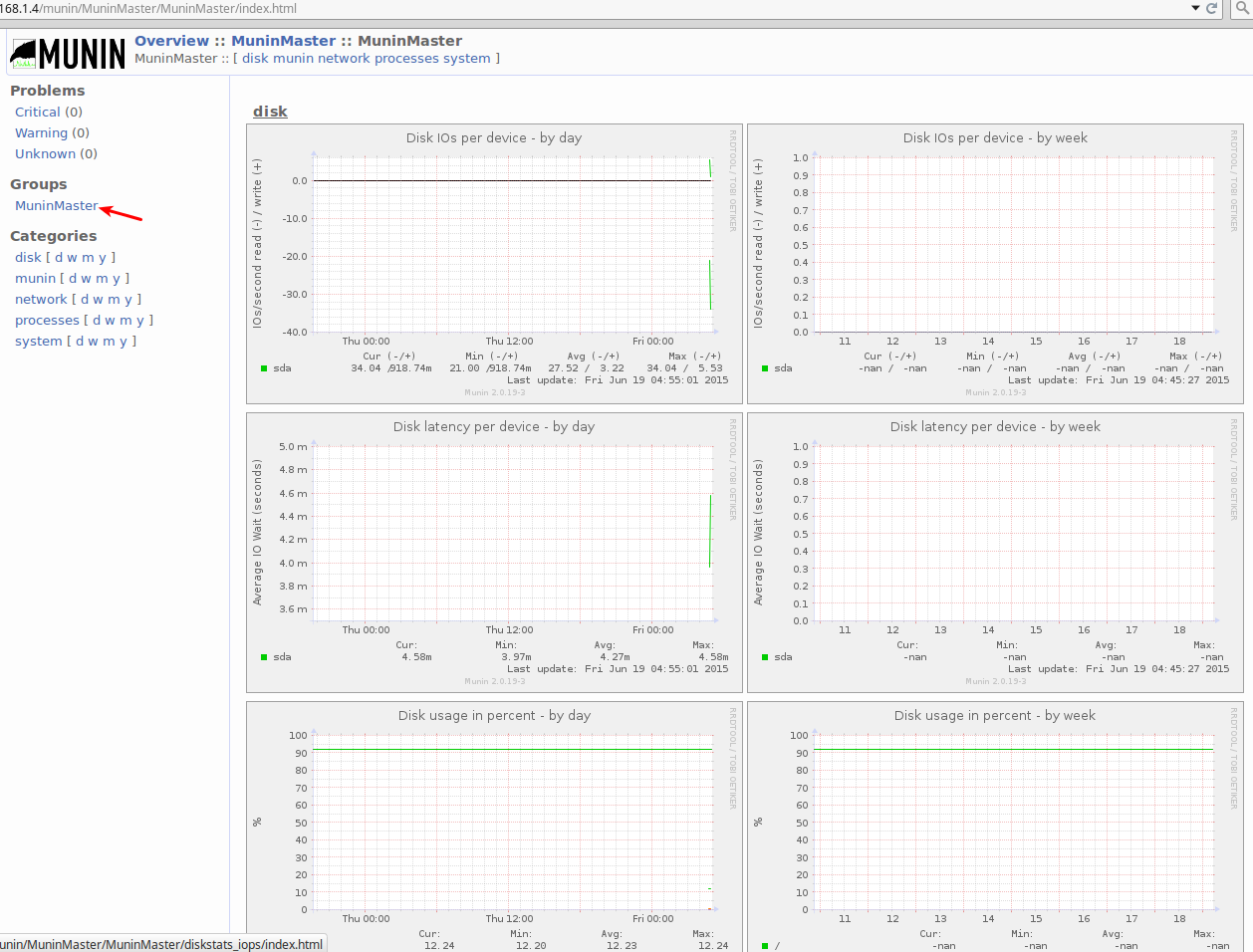 Let’s start with the Munin node — the second Ubuntu Droplet you created.

After the installation has completed successfully, the node’s configuration file should be in the /etc/munin directory. Open it with nano:

Towards the middle of the file, look for an allow ^127.0.0.1$ line and modify it so that it reflects the IP address of the Munin master. Note that the IP address is in regex format, so assuming that the master server’s IP address is 123.46.78.100, the line should read as follows:

Save and close the file. Then restart the Munin:

Back on the Munin master, open the main configuration file:

All we need to do in this file is insert a host tree for the (remote) node. The easiest approach to that is to copy and modify the host tree of the master. Be sure to replace node-ip-address with the IP address of the node you are adding:

Save and close the file. Then restart Apache:

Munin checks for new nodes every 5 minutes. Wait a few minutes, and then reload the Munin master’s web interface. You should see an entry for the node. If you don’t see it yet, try again in 5 minutes. Using this method, you may add as many nodes as you have to monitor. 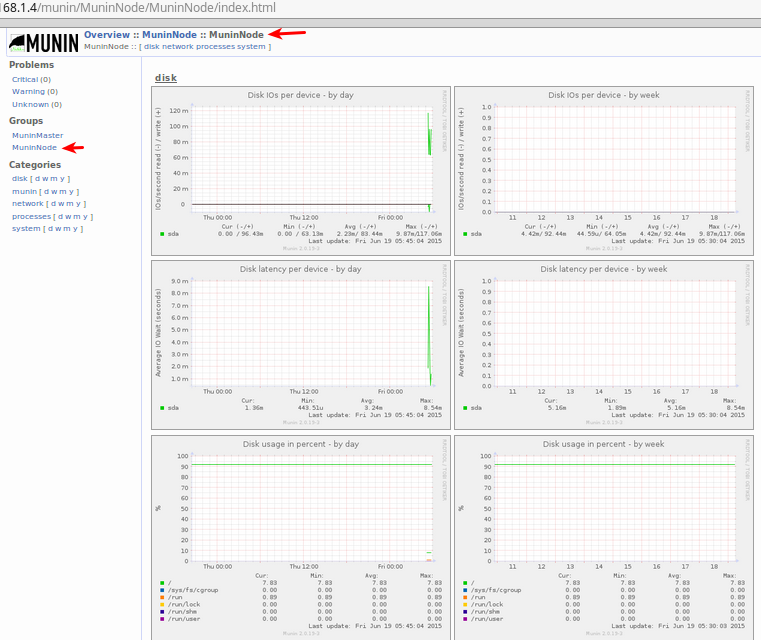 Munin monitors a system using plugin scripts, and by default, about a dozen set of plugins are installed and active. A complete list of available plugins are in the /usr/share/munin/plugins directory. To see which plugins can be used on your system, Munin provides the following command:

On the Munin master and node, you can also see a list of installed plugins in the /etc/munin/plugins directory.

A munin-plugins-extra package should have been installed when you installed Munin. If it was not, do so using.

To enable an available plugin that’s not currently in use, create a symbolic link for it from the /usr/share/munin/plugins directory to the /etc/munin/plugin directory.

For example, to enable the Fail2ban plugin, first install Fail2ban:

Then, create the symlink that enables the Munin plugin:

If you are having trouble configuring the Munin master, the Munin node, or getting the master to see the node, check out the log files for error messages:

You can also check the project’s page for additional troubleshooting tips.

Munin can be configured to monitor the system on which it is installed. Adding remote servers to the monitored system is as simple as install the munin-node package on the remote server (or node) and then modifying the server’s and node’s configuration files to point to the other IP address.

Munin works by using plugins, but not all are enabled out of the box. Information about plugins are available on the project’s page.

I do all the steps in the tutorial and get this error when going to myip/munin:

You don’t have permission to access /munin/ on this server.

The command to restart munin master is wrong. sudo service munin-node restart This is the correct

The Zooming in chart does not work! The image is not showing! Also would be nice to add notes about how to protect the access. For last, you talk about: “The rest of the configuration that will make graph zooming work properly will be covered in Step 3.” But there’s no such explanation!

This article is great, but as others mentioned, I had some difficulty setting up the htmldir according to the steps above. Instead, I used the default htmldir and everything appears to be working well. Here is a repo that you can use to quickly spin up a VM with Munin running: https://github.com/redgeoff/munin-vagrant

You may experience network graphs either not working or being a bit “off” (if_eth0, if_eth1) It seems the cause of this is (on Ubuntu and Debian at least) the plugin is unable to determine the speed of the interface, as it would with a physical connection.

I am unsure of what would be the correct speed setting, and I think this setting is used to show the reliable throughput.

I’ve tried it on Debian 8, where it would produce a nice graph although i think the numbers might be a bit low, but on an Ubuntu 14.04 droplet, the graph was not produced at all until i have I gave the plugin a value like above.

Does anyone know what the appropriate speed value should be?

Hello I’m really thank full for your post this is the best one for install & config munin I need some help to config SNMP for windows or router. and if you can help please complete your beautiful post by make munin update rate at one minute that’s what I really need thank you :)

Can you please add the following from an earlier tutorial?:

If you get an error message in your browser similar to the following, you need to wait longer for munin to create the files:

Forbidden, You don’t have permission to access /munin/ on this VPS.

Are you able to access Munin from outside of the local network? If so, how do you set it up? I read that ports 4949 and 4948 are taken up by Munin but I’ve opened those ports up on UFW and my router but still can’t access Munin externally.

Hi, how can i monitor nginx on a munin-node if my munin-master only has apache and not nginx?

Great article, I found that things worked better for me when I didn’t try changing the htmldir directory. It worked out of the box without changing that. /var/www/munin was just blank. :( I wrote a post based on what’s here to get this working with Django.