The Windows Subsystem for Linux 2, WSL 2 or WSL for short, is a tool on Microsoft Windows 10 that allows developers to run a Linux environment directly on Windows without any modifications, secondary Virtual Machine software, or dual-boot setups. The WSL natively integrates with most applications on your workstation, allowing for a Linux-like development experience on Windows. The WSL accomplishes this by using Microsoft’s built in virtualization software called Hyper-V to run.

In this tutorial you’ll enable the WSL, install Ubuntu 20.04 onto your workstation using the WSL, and install Microsoft’s new Windows Command Line to access your Ubuntu 20.04 installation. This will provide you with a Linux programming environment that is native to Windows.

If you are not installing the WSL on a virtual machine, you can skip this warning entirely.

The first thing you need to do is enable specific Windows services so that you can run the WSL. These services come with Windows but are turned off by default until you decide you need them. Open up the Start menu and search for PowerShell. You’ll need to right click on PowerShell and click on Run as Administrator. 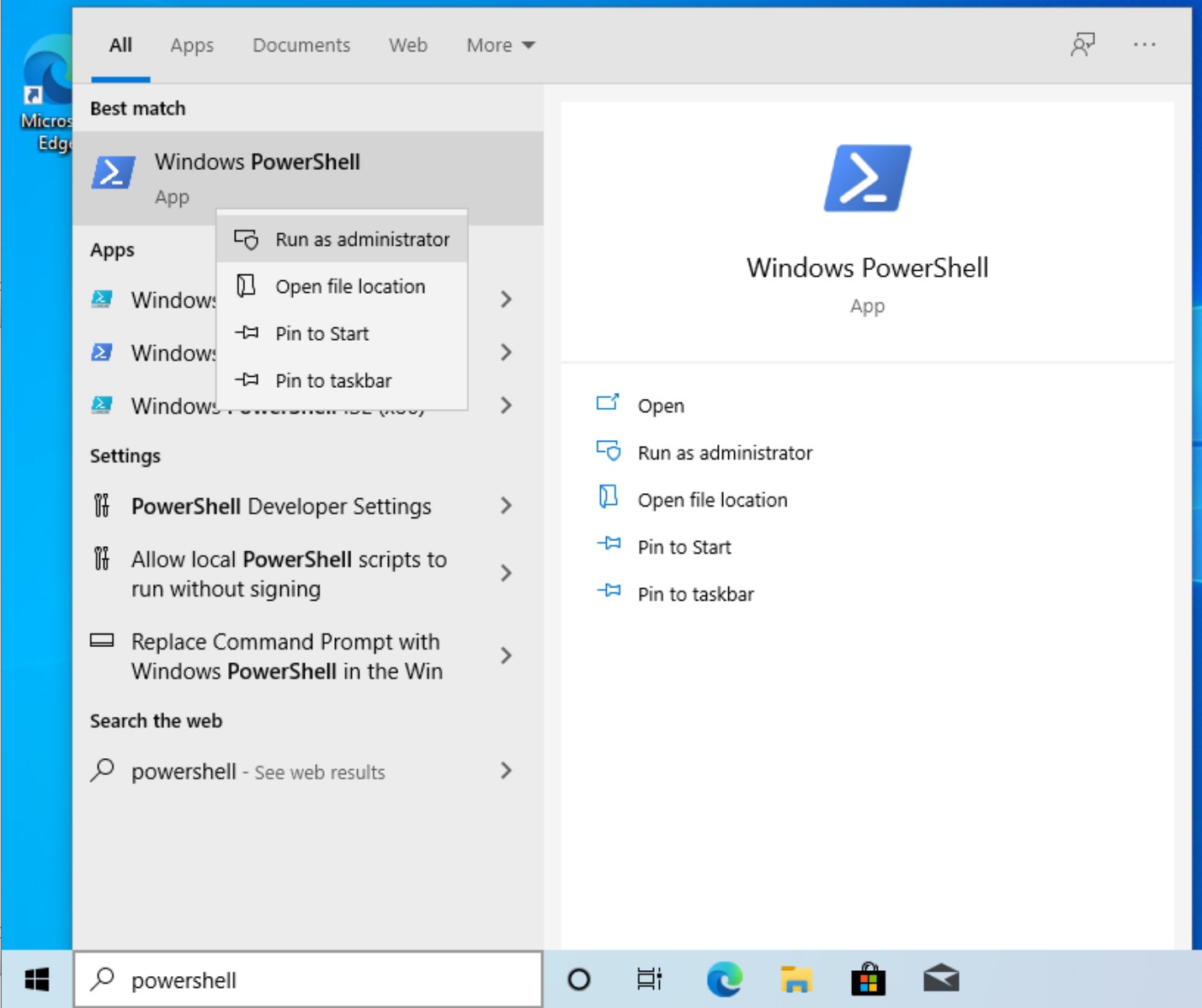 Once you’ve done this, a PowerShell window will open. You’ll use the Windows Deployment Image Servicing and Management tool to enable optional Windows features that are disabled by default. Run the following command to enable the WSL feature:

Next, run the following command in PowerShell to enable Windows’ Virtual Machine Platform. This enables the second generation of the WSL by enabling Hyper-V and allowing Windows’ to install Linux using it.

Once you have done this you will need to restart Windows for these changes to take place.

After the restart is finished, log back in to your workstation.

Next you’ll need to download the latest Linux kernel update package from Microsoft and install it.

To install this package, click to download the wsl_update_x64.msi package to your local workstation. Once it is downloaded, run the application and follow the prompts to install it.

Finally, you need to set the default version of the WSL to version 2. Open another PowerShell terminal as an administrator and run the following command:

Now that you’ve done this the WSL 2 is enabled and ready to run on your workstation. Next you’ll need to install a Linux-based operating system using the WSL 2.

Now that you have the WSL 2 installed, you next need to install a Linux distribution from the Microsoft Store. For this tutorial we will be installing the default Ubuntu option from the store, which happens to be Ubuntu 20.04 at this time. There are many different options to choose from and all should take a nearly identical approach to installation as laid out in this tutorial.

Open your Start menu, search for the Microsoft Store, and open it. 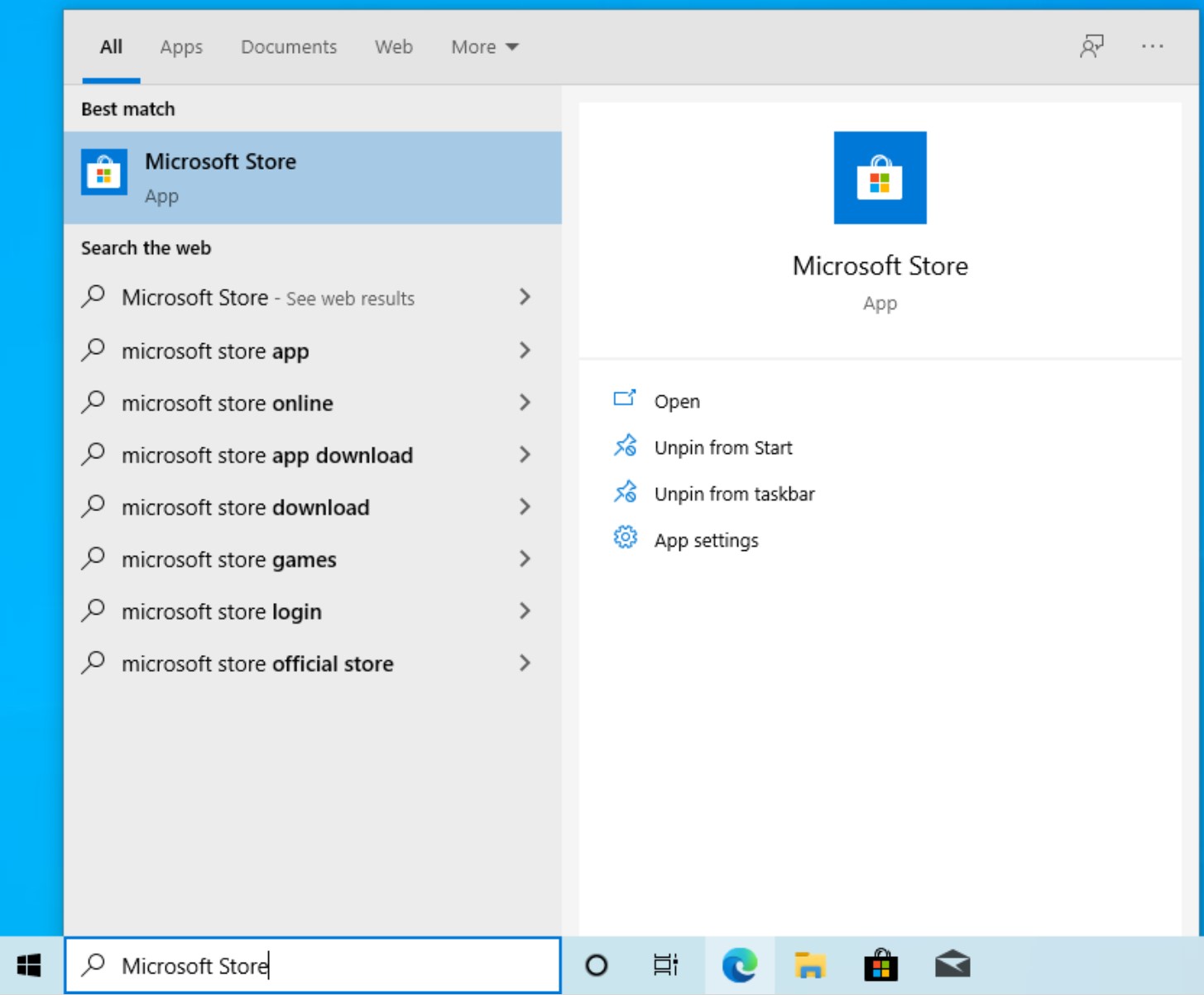 Locate the search bar in the upper right-hand corner and search for Linux.

Many options will appear; select the Ubuntu tile to install the latest supported version of Ubuntu. Click the Get button to add the app to your account. Once you’ve done this, the Get button will be replaced by the Install button. Click that button to install Ubuntu to your local workstation. Once the installation is done a Launch button will appear. Click this to launch Ubuntu.

The first time you launch Ubuntu it will inform you that it is performing initial configuration that may take a few minutes. After this it will prompt you for a Linux system username and password. This username and password doesn’t have to be the same as your system but it will be required for you to be able to use sudo to gain admin privileges. 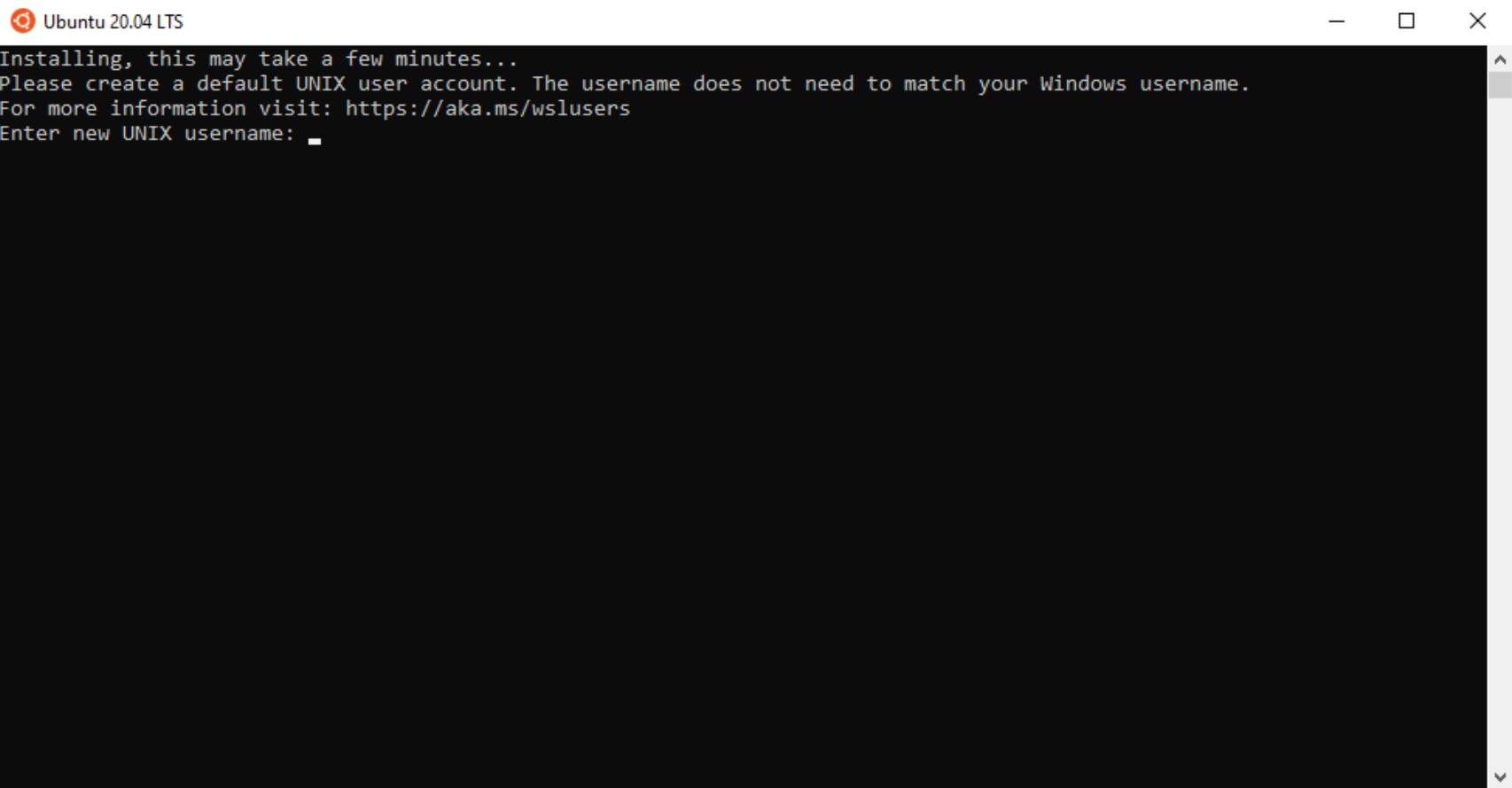 Once you have created your user the initial setup is complete and Ubuntu is ready to be used. 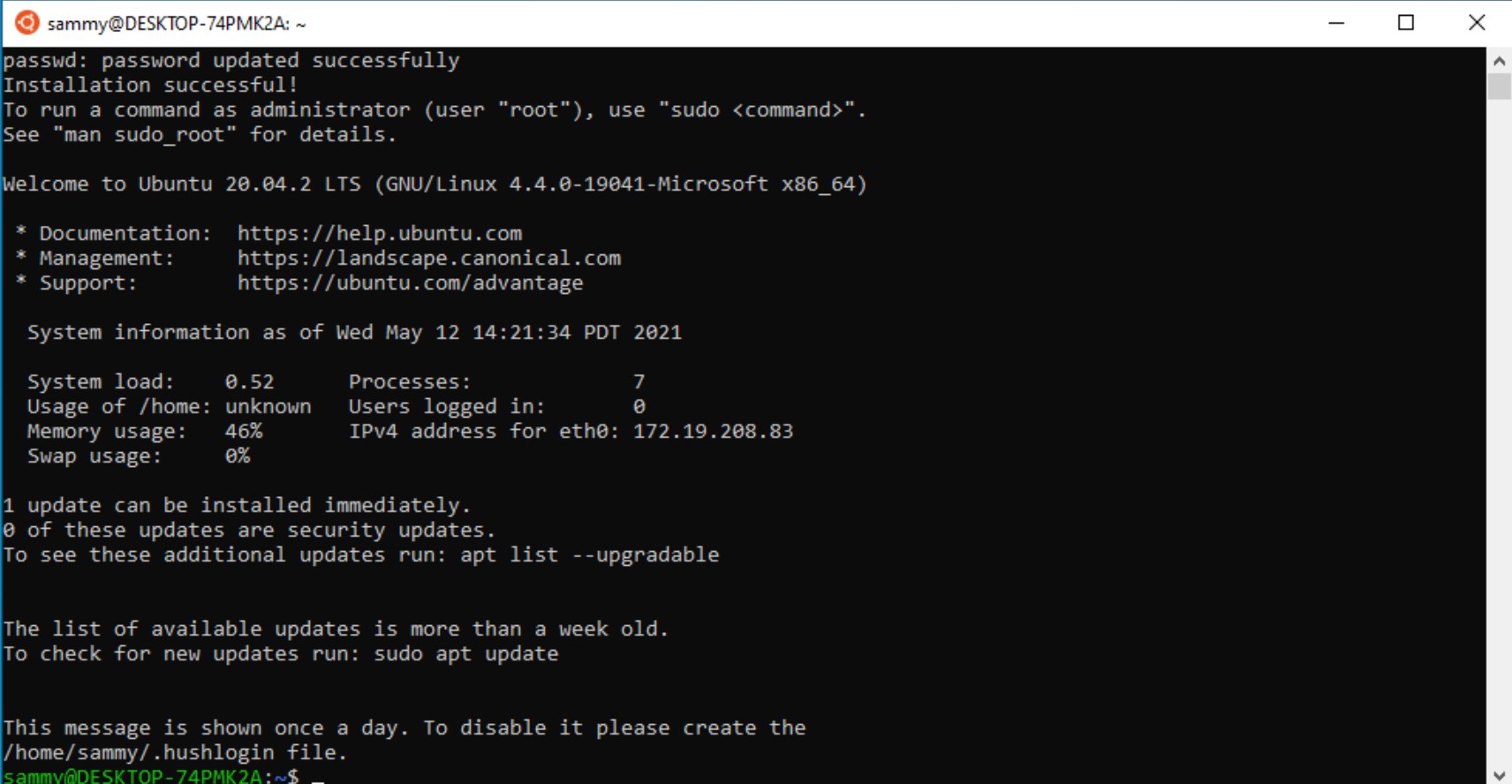 Now that you have Ubuntu installed, you’ll install a more robust terminal for accessing Ubuntu through Windows.

Ubuntu provides a default terminal for use, but Microsoft open sourced and reimplemented their Terminal tool and branded it at Windows Terminal. This terminal supports many more customization and ease-of-use options than the default Ubuntu terminal, so you’ll want to install it.

Next you’ll install this terminal on your workstation. Navigate back to the search bar in the Microsoft Store and search for Terminal. 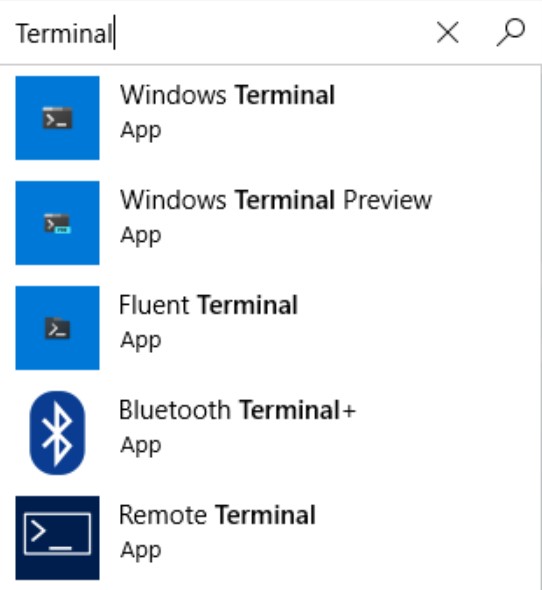 Install the Windows Terminal the same way you installed Ubuntu, by clicking Get and Install. Launch the terminal by clicking Launch or selecting the program from your Start menu. 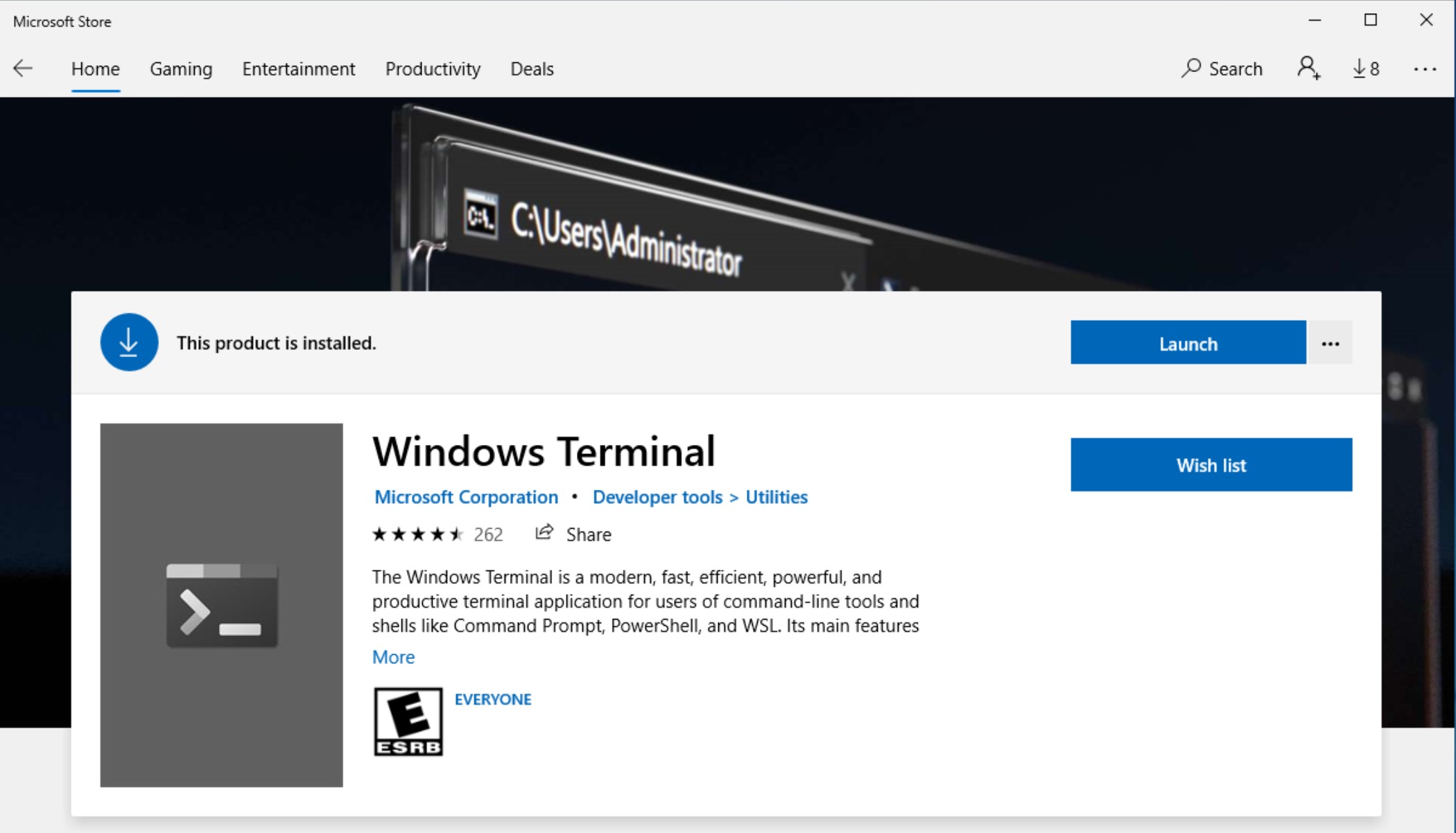 By default, the Windows Terminal opens up a PowerShell console.

If you want to open a different console, click the down arrow button to see what is available. You have access to PowerShell, Command Prompt, and Azure Cloud Shell by default. When you install any WSL Linux, it will appear here as well like the Ubuntu install did. Clicking Ubuntu will open an Ubuntu shell in a new tab. 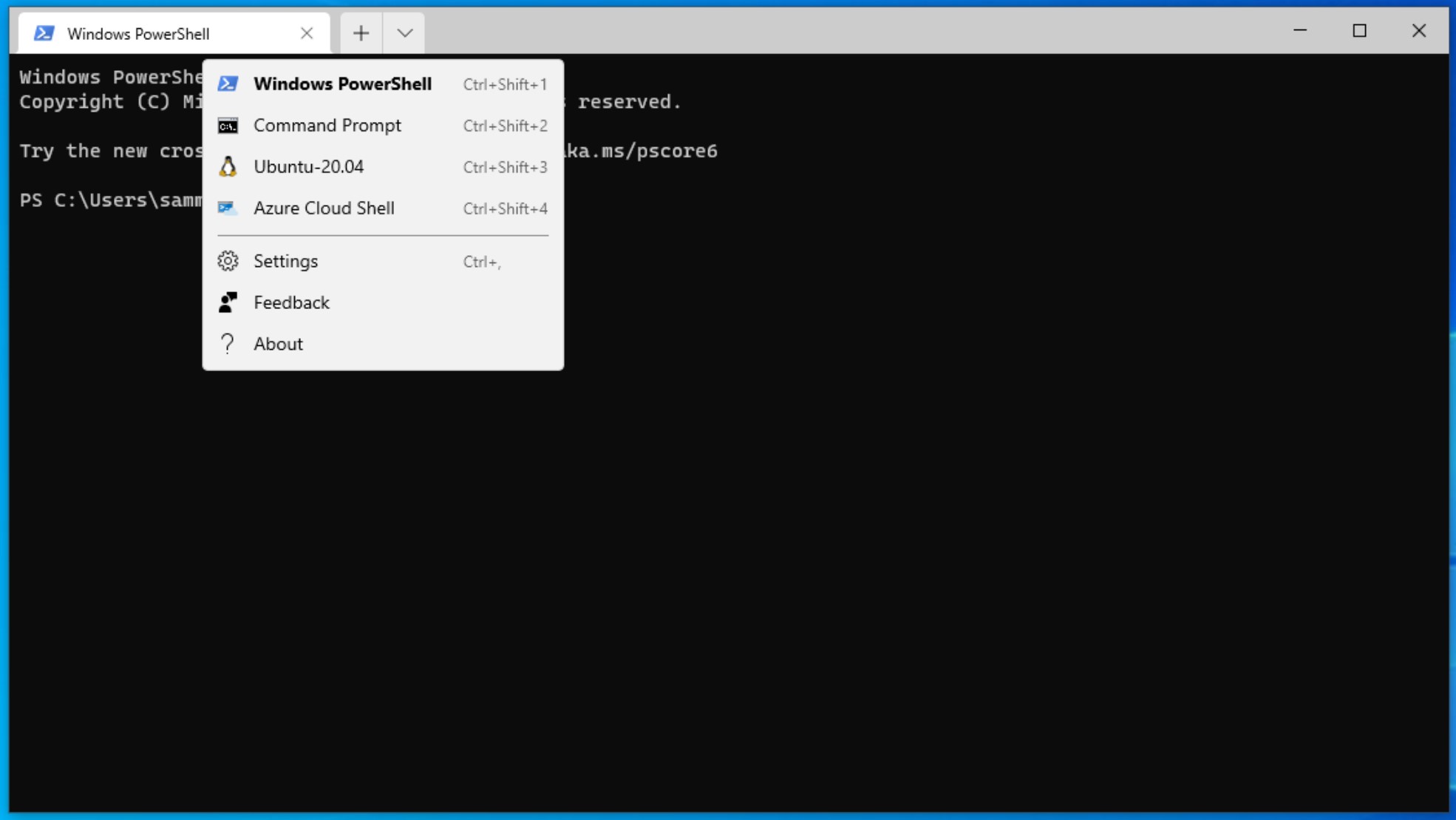 If you want to change some of the Terminal’s default options, click the down arrow button and select Settings. 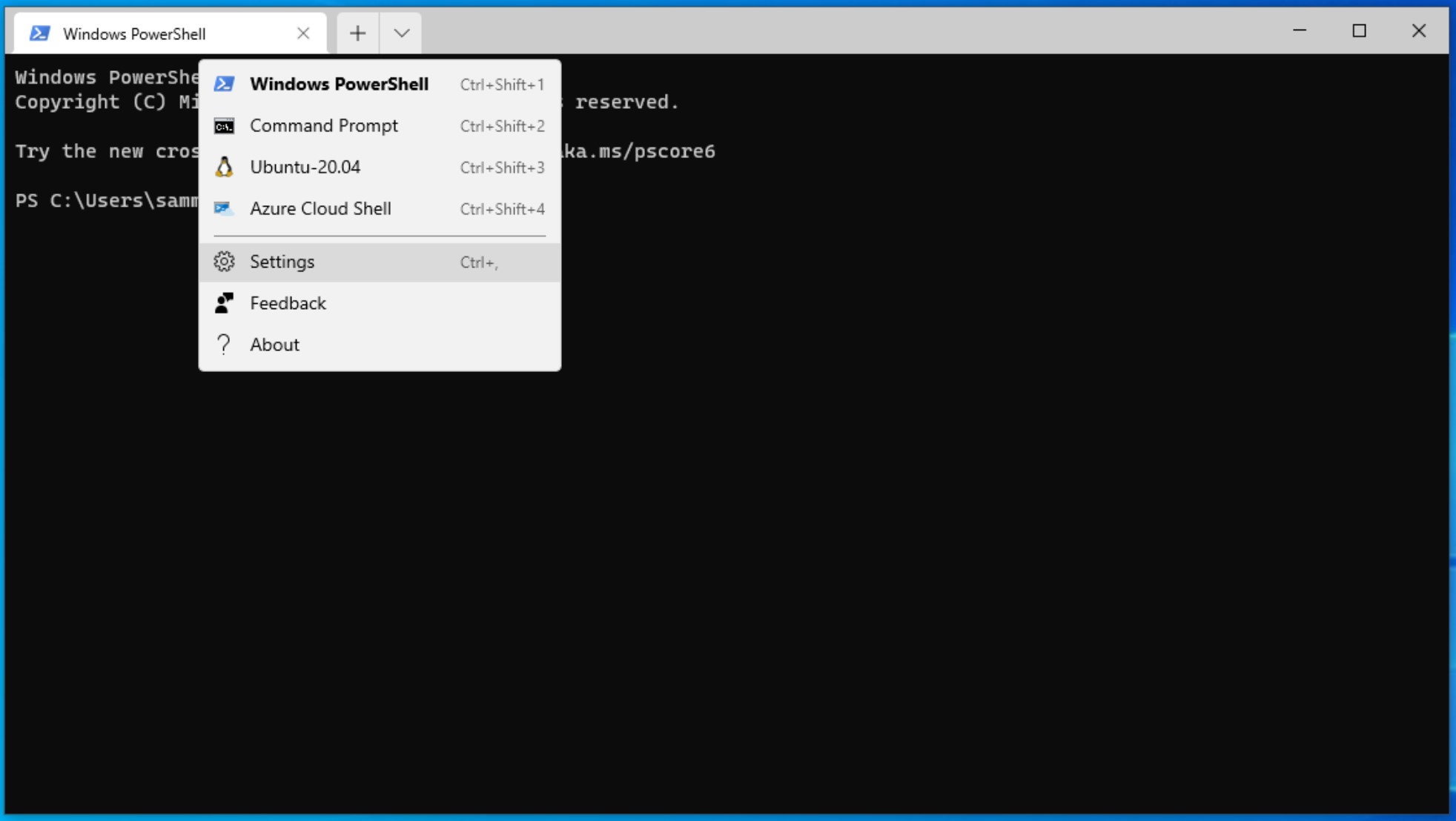 Next, set Ubuntu as your default console. Under Default Profile select your Ubuntu WSL image, and click Save to make it your default option. 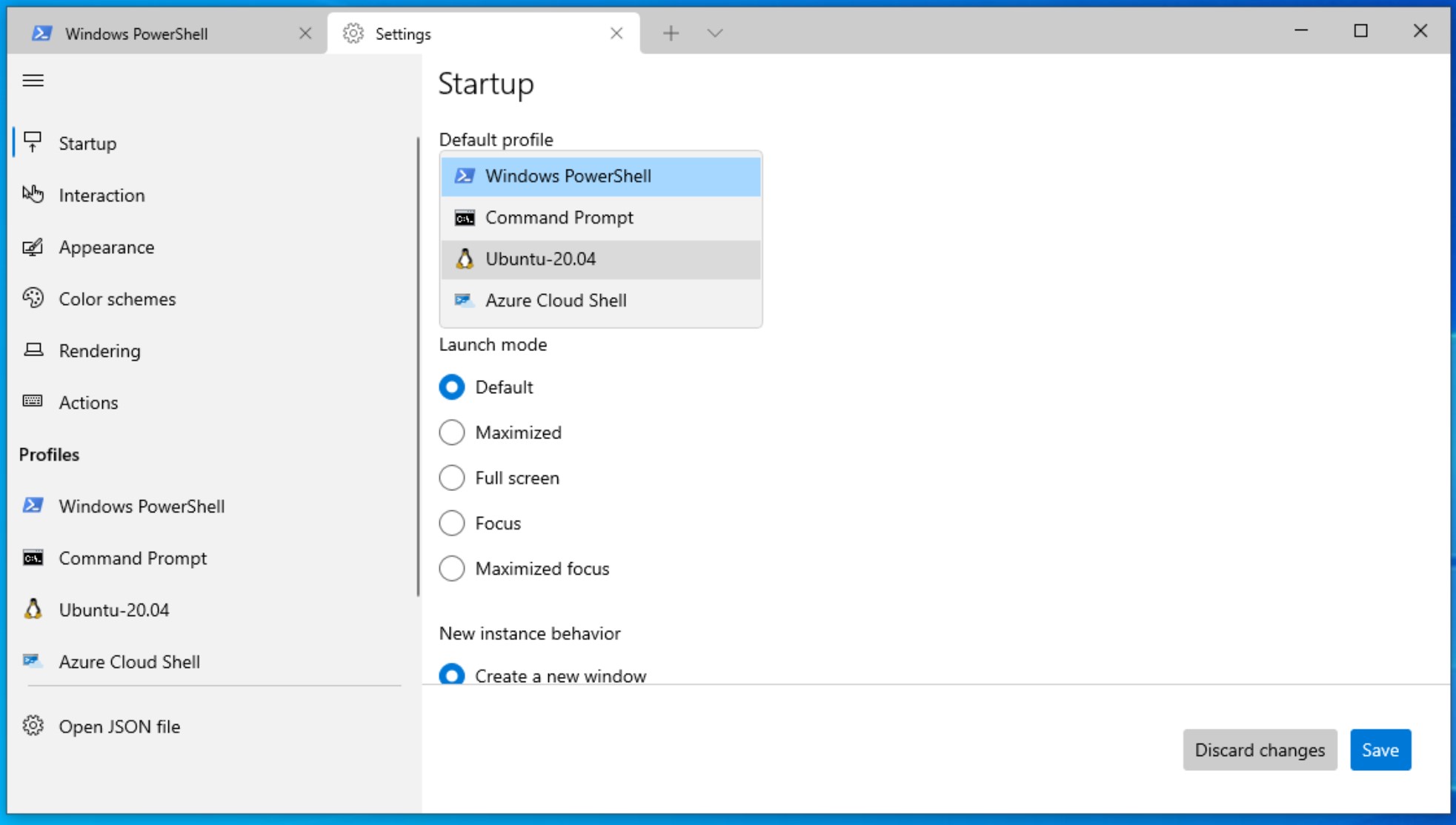 Now when you click the + button or open a new terminal Ubuntu will be the default shell. 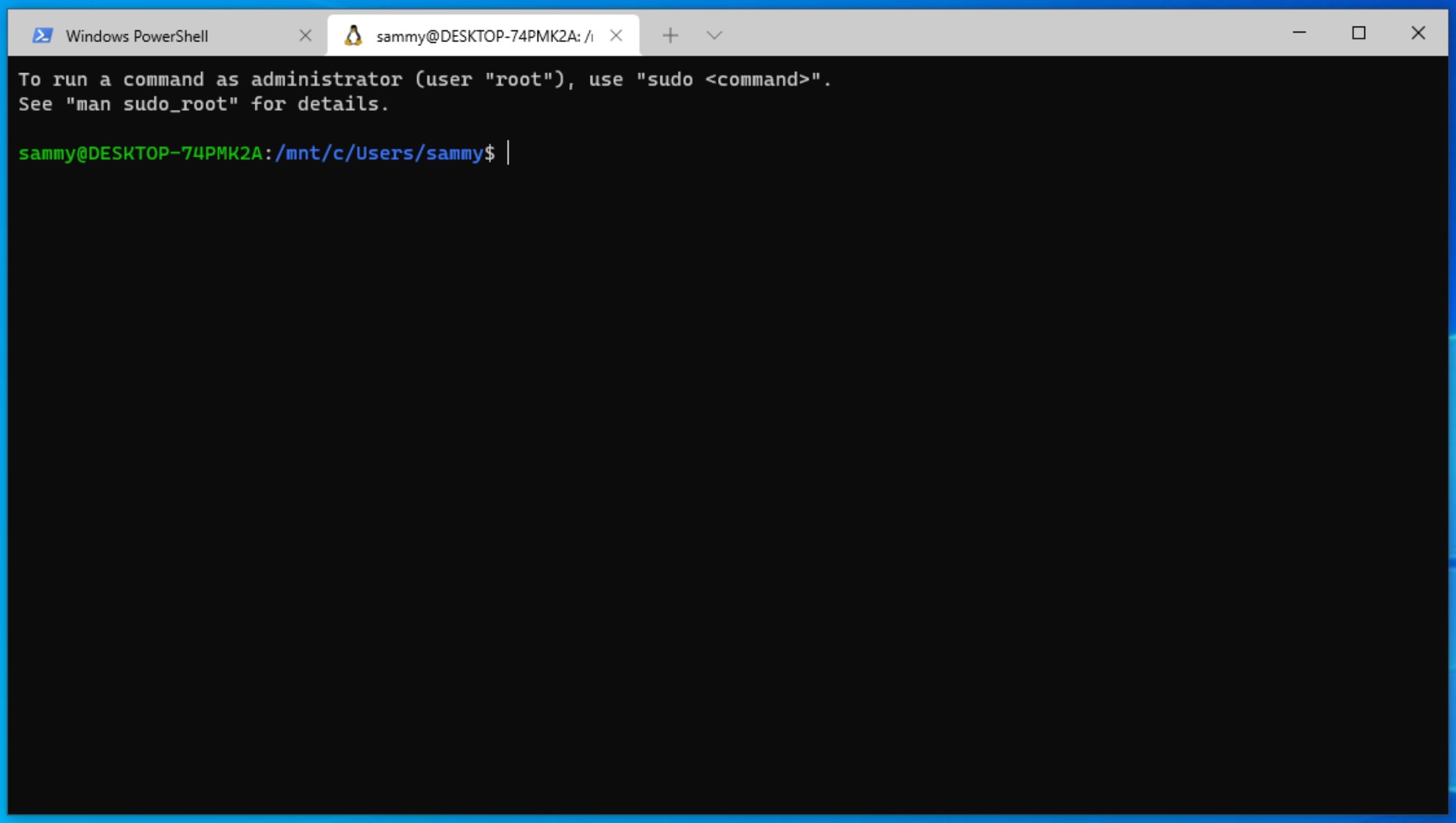 You now have the new Windows Command Line tool installed and configured to open your WSL Ubuntu terminal by default. You are now ready to use Linux on Windows using the WSL.