How To Protect SSH with fail2ban on Ubuntu 12.04
View

How To Protect SSH with fail2ban on CentOS 6
View

How To Monitor CPU Use on DigitalOcean Droplets

Published on July 11, 2017
By Melissa Anderson
Developer and author at DigitalOcean.

The amount of memory, the size of the cache, the speed of reading from and writing to disk, and the speed and availability of processing power are all key elements that affect the performance of your infrastructure. In this article, we’ll focus on introductory CPU monitoring concepts and alert strategies. We’ll describe how to use two common Linux utilities, uptime and top, to learn about your CPU load and utilization, and how to set DigitalOcean Alert Policies to notify you about significant changes related to a Droplet’s CPU.

The two utilities we discuss, uptime and top are available as part of the default installation of most Linux distributions. To take advantage of DigitalOcean features like Alert Policies, you’ll need a DigitalOcean Droplet with Monitoring enabled.

The guide How To Install and Use the DigitalOcean Agent for Monitoring explains how to enable Monitoring on a new Droplet as well as how to add the Monitoring Agent to a Droplet that is already running.

Before we delve into the details of uptime, top, and DigitalOcean monitoring, we’ll consider how CPU usage is measured and what kind of patterns are desirable.

CPU Load and CPU Utilization are two distinct ways of looking at the use of a computer’s processing power.

To conceptualize the main difference between the two, we can imagine the processors as cashiers in a grocery store and tasks as the customers. CPU load is like having a single checkout line where customers wait for the next cashier to become available. Load is essentially a count of the number of people in line, including the ones at the cash registers. The longer the line, the longer the wait. In contrast, CPU utilization is concerned only with how busy the cashiers are and has no idea how many customers are waiting in line.

More specifically, the tasks queue up to use the server’s CPUs. When one arrives at the top of the queue, it is scheduled to receive a certain amount of processing time. If it completes, then it exits; otherwise it returns to the end of the queue. In either case, the next task in line gets its turn.

CPU load is the length of the queue of scheduled tasks, including the ones being processed. Tasks can switch in a matter of milliseconds, so a single snapshot of the load isn’t as useful as the average of several readings taken over a period of time, so the load value is often provided as a load average.

The CPU load tells us about how much demand there is for CPU time. High demand can lead to contention for CPU time and degraded performance.

CPU Utilization, on the other hand, tells us how busy the CPUs are, without any awareness of how many processes are waiting. Monitoring utilization can show trends over time, highlight spikes, and help identify unwanted activity,

In order to correctly interpret the CPU load or usage figures, we’ll need to know how many processors the server has.

On most modern Linux distributions, we can also use the lscpu command, which displays not only the number of processors but also the architecture, model name, speed, much more:

Knowing the number of processors is important in understanding what the CPU-related output of different tools actually means.

###What are the Optimal Values for Load and Utilization? Optimal CPU utilization varies depending on the kind of work the server is expected to do. Sustained high CPU usage comes at the price of less responsive interactivity with the system. It is often appropriate for computationally-intense applications and batch jobs to consistently run at or near full capacity. However, if the system is expected to serve web pages or provide responsive interactive sessions for services like SSH, then it may be desirable to have some idle processing power available.

Like many aspects of performance, learning about the specific needs of the services on the system and monitoring for unexpected changes are key to optimizing resources.

There are a multitude of tools that can provide insight into a system’s CPU status. We’re going to look at two commands, uptime and top. Both are part of the default installation of most popular Linux distributions and are commonly used on-demand to investigate CPU load and utilization. In the examples that follow, we’ll examine the 2-core Droplet we profiled above.

We’ll start with the uptime command to look at the CPU load which, while showing only basic CPU load average, can be helpful when a system is responding slowly to interactive queries because it requires few system resources.

In this example, the command was run at 2:08pm on a server that had been up for almost 23 hours. Two users were connected when uptime was run. Since this server has 2 CPUs, during the minute before the command was run, the CPU load average of 2.00 means that during that minute, on average, two processes were using the CPUs and no processes were waiting. The 5-minute load average indicates that for some of that interval, there was an idle processor about 60% of the time. The 15-minute value indicates that there was even more available processing time. The three figures together show an increase in load over the last fifteen minutes.

Uptime provides a helpful glance at the load average, but In order to get more in-depth information, we’ll turn to top.

Like uptime, top is available on both Linux and Unix systems, but in addition to displaying the load averages for pre-set historical intervals, it provides periodic real-time CPU usage information as well as other pertinent performance metrics. Whereas uptime runs and exits, top stays in the foreground and refreshes at regular intervals.

The Header Block The first five lines provide summary information about processes on the server:

Finally, the header block is followed by a table with information about each individual process, which we’ll look at in a moment.

In the example header block below, the one-minute load average exceeds the number of processors by .77, indicating a short queue with a little bit of wait time. The total CPU capacity is 100% utilized and there’s plenty of free memory.

Let’s take a look at each of the fields on the CPU line in more depth:

Now that we’ve looked at the summary of CPU usage that is supplied in top’s header block, we’ll take a look at the process table that appears below it, paying attention to the CPU-specific columns.

The Process Table All the processes running on the server, in any state, are listed below the summary block. The example below includes the first six lines of the process table from the top command in the section above. By default, the process table is sorted by the %CPU, so we see the processes that are consuming the most CPU first.

The CPU% is presented as percent value, but it isn’t normalized, so on this two-core system, the total of all the values in the process table should add up to 200% when both processors are fully utilized.

Note: If you prefer to see normalized values, you can press SHIFT + I, and the display will switch from Irix mode to Solaris mode. This will display the same information, averaged across the server’s total number of CPUs, so that the amount being used won’t exceed 100%. When we switch to Solaris mode, we’ll get a brief message that Irix mode is off, and the values for our stress processes will switch from nearly 100% each to around 50% each.

So far, we’ve examined at two Linux commands that are commonly used to look into CPU load and CPU utilization. In the next section, we’ll look into the CPU monitoring tools available at no additional cost for DigitalOcean Droplets.

By default, all Droplets display Bandwidth, CPU, and Disk I/O graphs when you click the Droplet name in the Control Panel:

These graphs visualize each resource’s use for the last 6 hours, 24 hours, 7 days and 24 hours. The CPU graph provides CPU utilization information. The dark blue line indicates CPU use by user processes. The light blue indicates CPU use by system processes. The values on the graphs and their detail are normalized so that the total capacity is 100% regardless of the number of virtual cores.

The graphs let you see whether you’re experiencing intermittent or a sustained change in usage and are helpful in spotting changes in a server’s CPU usage pattern.

Once the agent is installed, you can set alert policies to notify you about resource usage. The thresholds you choose will depend on the workload.

Monitoring for Change: CPU above 1% If you’re using a Droplet primarily for integrating and soak testing code, you might set an alert that’s just slightly above historical patterns so to detect if new code pushed to the server has increased CPU usage. For the graph above where CPU never reaches 1%, a threshold of 1% CPU use for 5 minutes could provide early warning about code-based changes affecting CPU use. 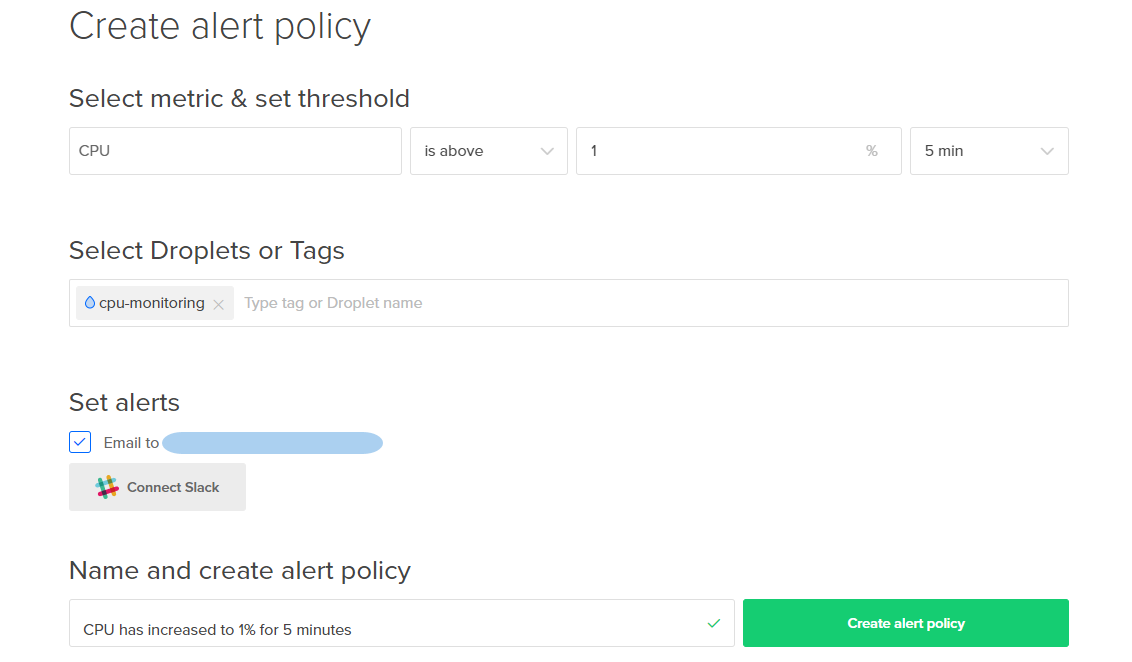 On most systems, there’s a good chance this threshold would be completely inappropriate, but by adjusting the duration and setting a threshold slightly above the average current load, you can learn early on when new code or new services impact the CPU utilization.

Monitoring for an Emergency Situation: CPU Utilization above 90% You might also want to set a threshold far above the average, one that you consider critical and which would warrant prompt investigation. For example, if a server that experienced sustained CPU use of 50% for five-minute intervals pretty regularly suddenly shot up to 90%, you might want to log in immediately to investigate the situation. Again, the thresholds are specific to the workload of the system.

In this article, we’ve explored uptime and top, two common Linux utilities that provide insight into CPU on Linux systems, as well as how to use DigitalOcean Monitoring to see the historical CPU utilization on a Droplet and to alert you to changes and emergencies.