By Lisa Tagliaferri and Hanif Jetha

Not using Debian 9?Choose a different version or distribution.

Jupyter Notebook offers a command shell for interactive computing as a web application. The tool can be used with several languages, including Python, Julia, R, Haskell, and Ruby. It is often used for working with data, statistical modeling, and machine learning.

This tutorial will walk you through setting up Jupyter Notebook to run from a Debian 9 server, as well as teach you how to connect to and use the notebook. Jupyter notebooks (or simply notebooks) are documents produced by the Jupyter Notebook app which contain both computer code and rich text elements (paragraph, equations, figures, links, etc.) which aid in presenting and sharing reproducible research.

By the end of this guide, you will be able to run Python 3 code using Jupyter Notebook running on a remote server.

In order to complete this guide, you should have a fresh Debian 9 server instance with a basic firewall and a non-root user with sudo privileges configured. You can learn how to set this up by running through our Initial Server Setup with Debian 9 guide.

To begin the process, we’ll download and install all of the items we need from the Debian repositories. We will use the Python package manager pip to install additional components a bit later.

We first need to update the local apt package index and then download and install the packages:

Next, install pip and the Python header files, which are used by some of Jupyter’s dependencies:

We can now move on to setting up a Python virtual environment into which we’ll install Jupyter.

To do this, we first need access to the virtualenv command. We can install this with pip.

Upgrade pip and install the package by typing:

With virtualenv installed, we can start forming our environment. Create and move into a directory where we can keep our project files:

Within the project directory, create a Python virtual environment by typing:

Before we install Jupyter, we need to activate the virtual environment. You can do that by typing:

Your prompt should change to indicate that you are now operating within a Python virtual environment. It will look something like this: (myprojectenv)user@host:~/myprojectdir$.

You’re now ready to install Jupyter into this virtual environment.

With your virtual environment active, install Jupyter with the local instance of pip:

At this point, you’ve successfully installed all the software needed to run Jupyter. We can now start the notebook server.

We’ll now set up an SSH tunnel so that we can access the notebook.

SSH tunneling can be done by running the following SSH command in a new local terminal window:

Optionally change port 8888 to one of your choosing to avoid using a port already in use by another process.

server_username is your username (e.g. sammy) on the server which you created and your_server_ip is the IP address of your server.

If no error shows up after running the ssh -L command, you can move into your programming environment and run Jupyter Notebook:

If you are using Windows, you can create an SSH tunnel using Putty.

Next, click SSH on the bottom of the left pane to expand the menu, and then click Tunnels. Enter the local port number to use to access Jupyter on your local machine. Choose 8000 or greater to avoid ports used by other services, and set the destination as localhost:8888 where :8888 is the number of the port that Jupyter Notebook is running on.

You should now be connected to it using a web browser. Jupyter Notebook is very powerful and has many features. This section will outline a few of the basic features to get you started using the notebook. Jupyter Notebook will show all of the files and folders in the directory it is run from, so when you’re working on a project make sure to start it from the project directory.

You can use the markdown cells to make notes and document your code. Let’s implement that simple equation and print the result. Click on the top cell, then press ALT+ENTER to add a cell below it. Enter the following code in the new cell. 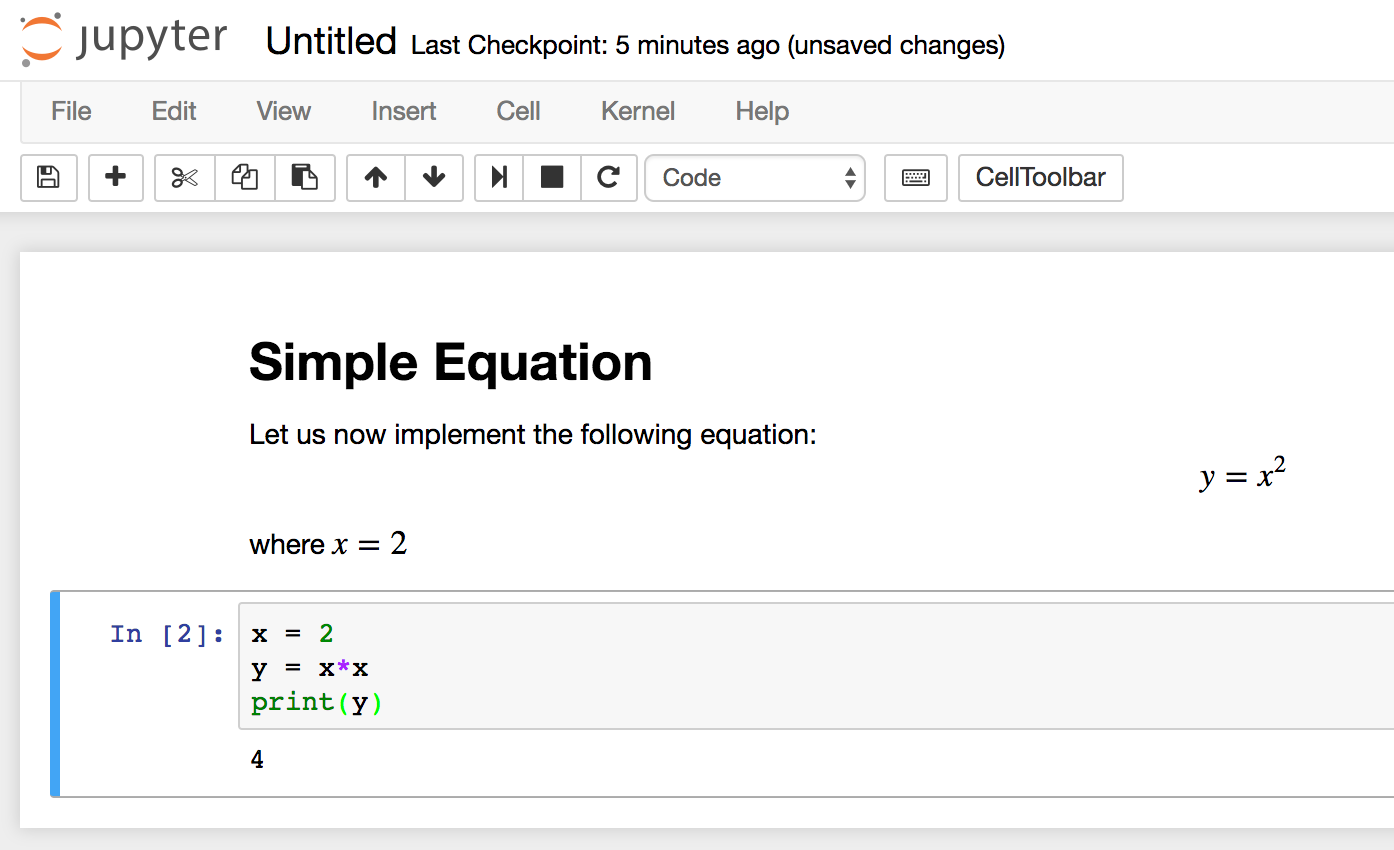 You now have the ability to import modules and use the notebook as you would with any other Python development environment!

Congratulations! You should now be able to write reproducible Python code and notes in Markdown using Jupyter Notebook. To get a quick tour of Jupyter Notebook from within the interface, select Help > User Interface Tour from the top navigation menu to learn more.

From here, you may be interested to read our series on Time Series Visualization and Forecasting.