By Savic
Developer and author at DigitalOcean.
English

With developer tools moving to the cloud, adoption of cloud IDE (Integrated Development Environment) platforms is growing. Cloud IDEs are accessible from every type of modern device through web browsers, and they offer numerous advantages for real-time collaboration scenarios. Working in a cloud IDE provides a unified development and testing environment for you and your team, while minimizing platform incompatibilities. Accessible through web browsers, cloud IDEs are available from every type of modern device.

Eclipse Theia is an extensible cloud IDE running on a remote server and accessible from a web browser. Visually, it’s designed to look and behave similarly to Microsoft Visual Studio Code, which means that it supports many programming languages, has a flexible layout, and has an integrated terminal. What separates Eclipse Theia from other cloud IDE software is its extensibility; it can be modified using custom extensions, which allow you to craft a cloud IDE suited to your needs.

In this tutorial, you’ll deploy Eclipse Theia to your CentOS 7 server using Docker Compose, a container orchestration tool. You’ll expose it at your domain using nginx-proxy, an automated system for Docker that simplifies the process of configuring Nginx to serve as a reverse proxy for a container. You’ll also secure it using a free Let’s Encrypt TLS certificate, which you’ll provision using its specialized add-on. In the end, you’ll have Eclipse Theia running on your CentOS 7 server available via HTTPS and requiring the user to log in.

In this section, you’ll deploy nginx-proxy and its Let’s Encrypt add-on using Docker Compose. This will enable automatic TLS certificate provisioning and renewal, so that when you deploy Eclipse Theia it will be accessible at your domain via HTTPS.

For the purposes of this tutorial, you’ll store all files under ~/eclipse-theia. Create the directory by running the following command:

You’ll store the Docker Compose configuration for nginx-proxy in a file named nginx-proxy-compose.yaml. Create it using your text editor:

Here you’re defining two services that Docker Compose will run, nginx-proxy and its Let’s Encrypt companion. For the proxy, you specify jwilder/nginx-proxy as the image, map HTTP and HTTPS ports, and define volumes that will be accessible to it during runtime.

Volumes are directories on your server that the defined service will have full access to, which you’ll later use to set up user authentication. To achieve that, you’ll make use of the first volume from the list, which maps the local /etc/nginx/htpasswd directory to the same one in the container. In that folder, nginx-proxy expects to find a file named exactly as the target domain, containing log-in credentials for user authentication in the htpasswd format (username:hashed_password).

For the add-on, you name the Docker image and allow access to Docker’s socket by defining a volume. Then, you specify that the add-on should inherit access to the volumes defined for nginx-proxy. Both services have restart set to always, which orders Docker to restart the containers in case of crash or system reboot.

Deploy the configuration by running:

Here you pass in the nginx-proxy-compose.yaml filename to the -f parameter of the docker-compose command, which specifies the file to run. Then, you pass the up verb that instructs it to run the containers. The -d flag enables detached mode, which means that Docker Compose will run the containers in the background.

You’ve deployed nginx-proxy and its Let’s Encrypt companion using Docker Compose. Now you’ll move on to set up Eclipse Theia at your domain and secure it.

In this section, you’ll create a file containing any allowed log-in combinations that a user will need to input. Then, you’ll deploy Eclipse Theia to your server using Docker Compose and expose it at your secured domain using nginx-proxy.

As explained in the previous step, nginx-proxy expects log-in combinations to be in a file named after the exposed domain, in the htpasswd format and stored under the /etc/nginx/htpasswd directory in the container. The local directory which maps to the virtual one does not need to be the same, as was specified in the nginx-proxy config.

Create a file that will store the logins for your domain:

Remember to replace theia.your-domain with your Eclipse Theia domain.

To add a username and password combination, run the following command:

Replace username with the username you want to add. You’ll be asked for a password twice. After providing it, htpasswd will add the username and hashed password pair to the end of the file. You can repeat this command for as many logins as you wish to add.

In this config, you define a single service called eclipse-theia with restart set to always and theiaide/theia:next as the container image. You also set init to true to instruct Docker to use init as the main process manager when running Eclipse Theia inside the container.

Then, you specify two environment variables in the environment section: VIRTUAL_HOST and LETSENCRYPT_HOST. The former is passed on to nginx-proxy and tells it at what domain the container should be exposed, while the latter is used by its Let’s Encrypt add-on and specifies for which domain to request TLS certificates. Unless you specify a wildcard as the value for VIRTUAL_HOST, they must be the same.

Remember to replace theia.your-domain with your desired domain, then save and close the file.

Then, in your browser, navigate to the domain you’re using for Eclipse Theia. Your browser will show you a prompt asking you to log in. After providing the correct credentials, you’ll enter Eclipse Theia and immediately see its editor GUI. In your address bar you’ll see a padlock indicating that the connection is secure. If you don’t see this immediately, wait a few minutes for the TLS certificates to provision, then reload the page.

Now that you can securely access your cloud IDE, you’ll start using the editor in the next step.

In this section, you’ll explore some of the features of the Eclipse Theia interface.

On the left-hand side of the IDE, there is a vertical row of four buttons opening the most commonly used features in a side panel.

This bar is customizable so you can move these views to a different order or remove them from the bar. By default, the first view opens the Explorer panel that provides tree-like navigation of the project’s structure. You can manage your folders and files here—creating, deleting, moving, and renaming them as necessary.

After creating a new file through the File menu, you’ll see an empty file open in a new tab. Once saved, you can view the file’s name in the Explorer side panel. To create folders right click on the Explorer sidebar and click on New Folder. You can expand a folder by clicking on its name as well as dragging and dropping files and folders to upper parts of the hierarchy to move them to a new location. 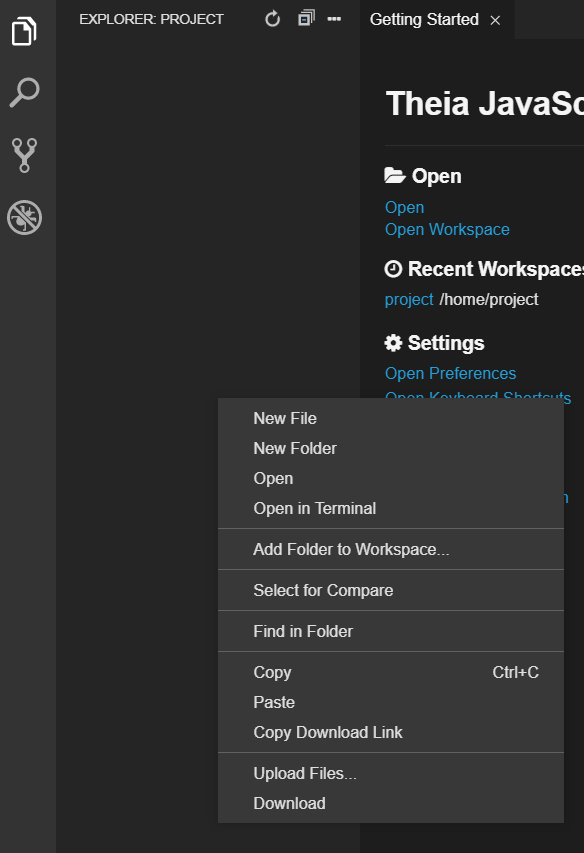 The next two options provide access to search and replace functionality. Following it, the next one provides a view of source control systems that you may be using, such as Git.

The final view is the debugger option, which provides all the common actions for debugging in the panel. You can save debugging configurations in the launch.json file.

The central part of the GUI is your editor, which you can separate by tabs for your code editing. You can change your editing view to a grid system or to side-by-side files. Like all modern IDEs, Eclipse Theia supports syntax highlighting for your code.

You can gain access to a terminal by typing CTRL+SHIFT+` , or by clicking on Terminal in the upper menu, and selecting New Terminal. The terminal will open in a lower panel and its working directory will be set to the project’s workspace, which contains the files and folders shown in the Explorer side panel.

You’ve explored a high-level overview of the Eclipse Theia interface and reviewed some of the most commonly used features.

You now have Eclipse Theia, a versatile cloud IDE, installed on your CentOS 7 server using Docker Compose and nginx-proxy. You’ve secured it with a free Let’s Encrypt TLS certificate and set up the instance to require log-in credentials from the user. You can work on your source code and documents with it individually or collaborate with your team. You can also try building your own version of Eclipse Theia if you need additional functionality. For further information on how to do that, visit the Theia docs.

I follow this tutorial in a CentOs 7 tht have installed 5 domains via whm/cpanel. I choose one domain I add a subdomain via cpanel and choose this subdomain to point theia (theia.mydomaindotcom)

but when i try to access to the sbdomain that i choose I see the subdomain page.

How can i deply this in a existing server?