Inheritance in java is one of the core concepts of Object-Oriented Programming. Java Inheritance is used when we have is-a relationship between objects. Inheritance in Java is implemented using extends keyword.

Inheritance in Java is the method to create a hierarchy between classes by inheriting from other classes.

Java Inheritance is transitive - so if Sedan extends Car and Car extends Vehicle, then Sedan is also inherited from the Vehicle class. The Vehicle becomes the superclass of both Car and Sedan.

Every class in java implicitly extends java.lang.Object class. So Object class is at the top level of inheritance hierarchy in java.

Let’s see how to implement inheritance in java with a simple example.

The Animal is the base class here. Let’s create a Cat class that inherits from Animal class.

Notice that we are using extends keyword to implement inheritance in java.

Let’s write a simple test class to create a Cat object and use some of its methods. 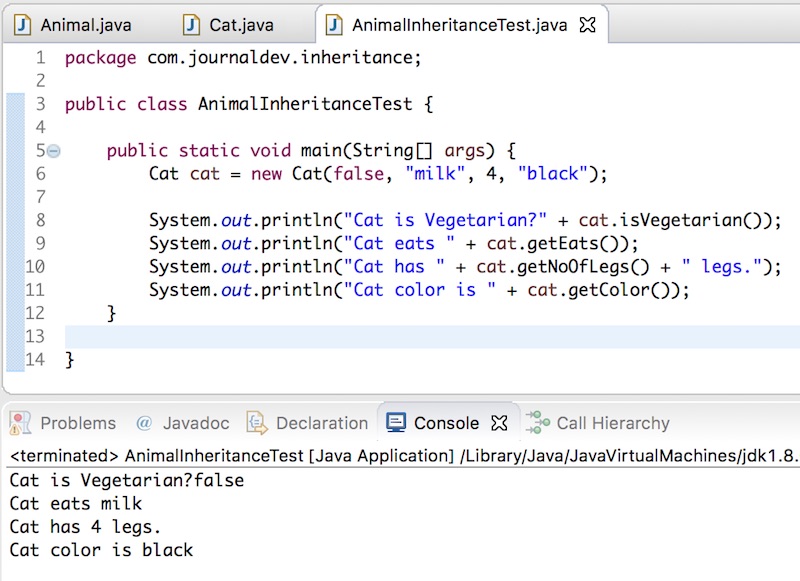 I have recently published two videos on YouTube explaining Inheritance in detail with sample programs, you should watch them below.

You can checkout more inheritance examples from our GitHub Repository.

There are lot of good tutorials. Thank you !

Design the given inheritance in C++ .Note that bus and truck are friend classes and can work as a bridge. Also create a function which calculates total no of visits per day of both (bus and truck) and find total fuel cost of the day.

There’s a typo error at the example in point 11. Please, add examples at some points (let’s say: points 9 and 10, and others). Thanks for your help.

Hi Pankaj, your article are too good man, i like the detail explanation about the topic which is given by you, i also like the interview question section provided by you, thank, really appreciate your work.

Hi, Pankaj! I have found a small typo in the list of important points: “Subclass members with default access is accessible to subclass ONLY if they are in same package.” Seems it has to start with “Superclass members…” Anyway great tutorial, thank you!

Interesting articles on information like this is a great find. It’s like finding a treasure. I appreciate how you express your many points and share in your views. Thank you.