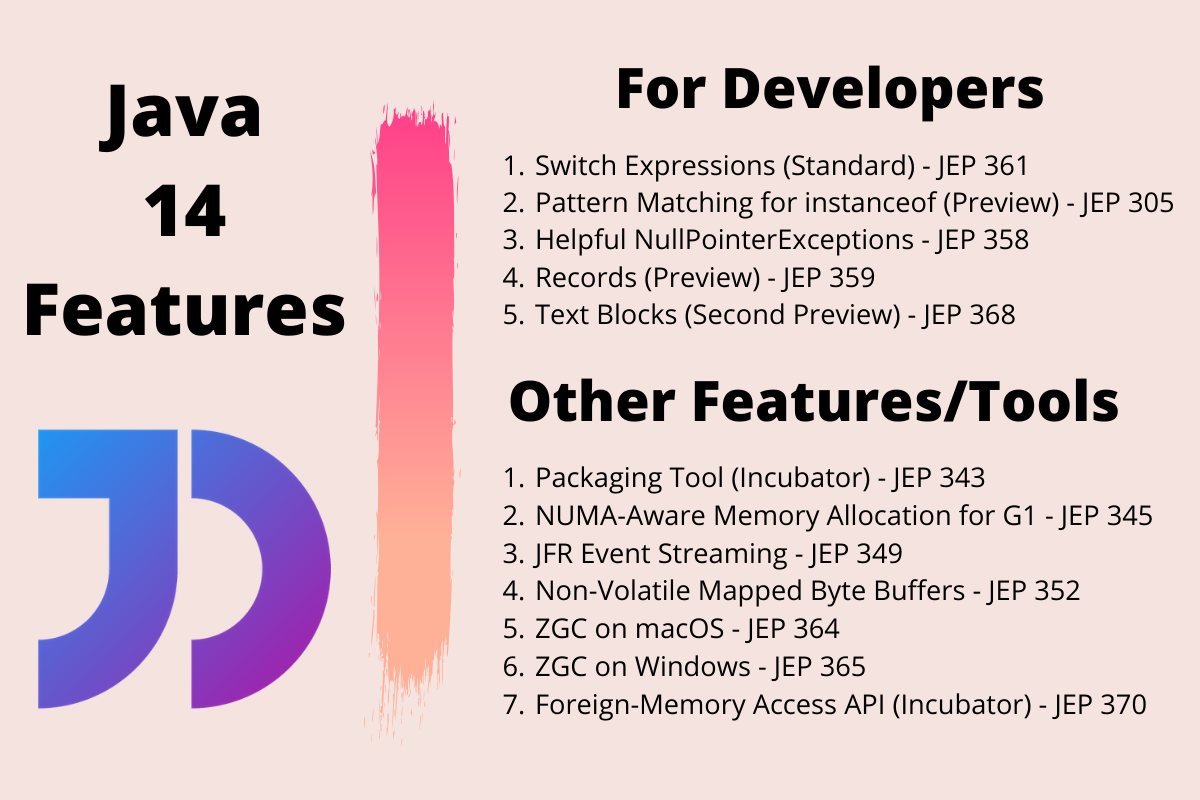 Once that’s done, open the bash_profile using any text editor. I’m using vim ~/.bash_profile. Set the path of Java14 to JAVA_HOME, save changes and do a source ~/.bash_profile to reflect the changes.

It’s important to note that many features released in Java 14 are in preview. This means that though they’re fully working right now, things may be modified in the future. Some could be made a standard or simply removed in the next release cycles. In order to test preview features, you need to explicitly set --enable-preview when running the JShell or Java Program as shown below:

In the next few sections, let’s discuss some of the language and JVM features.

Switch Expressions after staying a preview feature in the last two releases --Java 12 and Java 13 have finally attained permanent status in Java 14.

Java 14 has finally made these features a standard now.

Java 14, gets rid of this verbosity by making conditional extraction a lot more concise.

In the above code, the instance jd would be only assigned if obj is of type Journaldev. The scope of the variable is limited to the conditional block only.

Null Pointer Exceptions are a nightmare for any developer. Previously, until Java 13, it was tricky to debug the infamous NPEs. Developers had to fall onto other debugging tools or manually figure the variable/method that was null since the stack trace would only show the line number.

Java 14 introduced a new JVM feature which gives better insights with a more descriptive stack as shown below:

Note: The above feature is not a language feature. It’s an enhancement in the runtime environment.

A record is a data class that stores pure data. The idea behind introducing records is to quickly create simple and concise classes devoid of boilerplate code.

Normally a class in Java would require you to implement equals(), hashCode() , the getters and setters methods. While some IDEs support auto-generation of such classes, the code is still verbose. With a record you need to simply define a class in the following way.

The Java compiler will generate a constructor, private final fields, accessors, equals/hashCode and toString methods automatically. The auto-generated getter methods of the above class are name() and topic().

To look into the generated code, use javap Author after you’ve compiled the program using javac. The following illustration shows the generated class for record Author (String name, String topic) {}:

The semantics of Records is similar to Data Classes in Kotlin

Furthermore, we can add additional fields, methods, and constructor to the record in the following way:

The additional constructor defined inside the record is called a Compact constructor. It doesn’t consist of any parameters and is just an extension of the canonical constructor.

A compact constructor wouldn’t be generated as a separate constructor by the compiler. Instead, it is used for validation cases and would be invoked at the start of the main constructor.

4.1) Values Inside Reference Fields Of A Record Can Be Mutated

The following code shows an example of implementing an interface with records:

Here’s the output of the above code in action in a JShell:

Records allow declaring multiple constructors with or without parameters as shown below:

4.5) Check Record and its Components at Runtime

Records provide us with isRecord() and getRecordComponents() to check if the class is a record and also look into its fields and types. The following illustration shows how it is done:

While we did add additional fields and methods to the record in the above code examples, make sure you don’t overdo this. Records are designed as plain data carriers and if you’re looking to implement a lot of additional methods, it’s better to fall back onto the normal class.

Text Blocks were introduced as a preview feature in Java 13 with the goal to allow easy creation of multiline string literals. It’s useful in easily creating HTML and JSON or SQL query strings.

In Java 14, Text Blocks are still in preview with some new additions. We can now use:

Hi Anupam Can you demonstrate all scenarios of records in a working Java example and post the link here. All use cases should be explained properly with comments I’m finding hard to understand when ur using shell. Hope you understand my doubts