Understanding JVM Memory Model, Java Memory Management are very important if you want to understand the working of Java Garbage Collection. Today we will look into memory management in Java, different parts of JVM memory and how to monitor and perform garbage collection tuning.

Method Area is part of space in the Perm Gen and used to store class structure (runtime constants and static variables) and code for methods and constructors.

Java Stack memory is used for execution of a thread. They contain method specific values that are short-lived and references to other objects in the heap that is getting referred from the method. You should read Difference between Stack and Heap Memory.

Most of the times, above options are sufficient, but if you want to check out other options too then please check JVM Options Official Page.

Java Garbage Collection is the process to identify and remove the unused objects from the memory and free space to be allocated to objects created in future processing. One of the best features of Java programming language is the automatic garbage collection, unlike other programming languages such as C where memory allocation and deallocation is a manual process. Garbage Collector is the program running in the background that looks into all the objects in the memory and find out objects that are not referenced by any part of the program. All these unreferenced objects are deleted and space is reclaimed for allocation to other objects. One of the basic ways of garbage collection involves three steps:

There are two problems with a simple mark and delete approach.

The above shortcomings with the simple approach is the reason that Java Garbage Collection is Generational and we have Young Generation and Old Generation spaces in the heap memory. I have already explained above how objects are scanned and moved from one generational space to another based on the Minor GC and Major GC.

We can use the Java command line as well as UI tools for monitoring garbage collection activities of an application. For my example, I am using one of the demo application provided by Java SE downloads. If you want to use the same application, go to Java SE Downloads page and download JDK 7 and JavaFX Demos and Samples. The sample application I am using is Java2Demo.jar and it’s present in jdk1.7.0_55/demo/jfc/Java2D directory. However this is an optional step and you can run the GC monitoring commands for any java application. Command used by me to start the demo application is:

We can use jstat command line tool to monitor the JVM memory and garbage collection activities. It ships with standard JDK, so you don’t need to do anything else to get it. For executing jstat you need to know the process id of the application, you can get it easily using ps -eaf | grep java command.

So the process id for my java application is 9582. Now we can run jstat command as shown below.

The last argument for jstat is the time interval between each output, so it will print memory and garbage collection data every 1 second. Let’s go through each of the columns one by one.

The advantage of jstat is that it can be executed in remote servers too where we don’t have GUI. Notice that the sum of S0C, S1C and EC is 10m as specified through -Xmn10m JVM option.

If you want to see memory and GC operations in GUI, then you can use jvisualvm tool. Java VisualVM is also part of JDK, so you don’t need to download it separately. Just run jvisualvm command in the terminal to launch the Java VisualVM application. Once launched, you need to install Visual GC plugin from Tools -< Plugins option, as shown in below image. 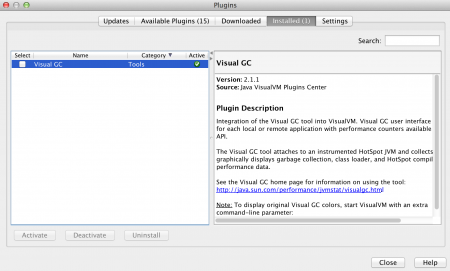 After installing Visual GC, just open the application from the left side column and head over to Visual GC section. You will get an image of JVM memory and garbage collection details as shown in below image. 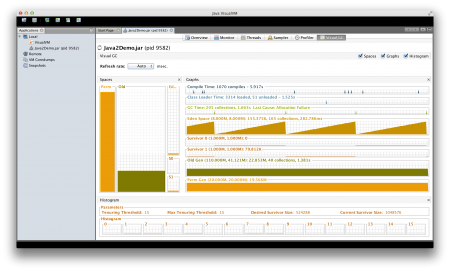 Java Garbage Collection Tuning should be the last option you should use for increasing the throughput of your application and only when you see a drop in performance because of longer GC timings causing application timeout. If you see java.lang.OutOfMemoryError: PermGen space errors in logs, then try to monitor and increase the Perm Gen memory space using -XX:PermGen and -XX:MaxPermGen JVM options. You might also try using -XX:+CMSClassUnloadingEnabled and check how it’s performing with CMS Garbage collector. If you see a lot of Full GC operations, then you should try increasing Old generation memory space. Overall garbage collection tuning takes a lot of effort and time and there is no hard and fast rule for that. You would need to try different options and compare them to find out the best one suitable for your application. That’s all for Java Memory Model, Memory Management in Java and Garbage Collection, I hope it helps you in understanding JVM memory and garbage collection process.

Method Area is part of heap. Not part of Perm Generation. For Confirmation see Oracle Documentation

Awesome article, as always! thanks

Good read Pankaj! Demos with jstat and jVisualVM were really what will set this article apart from other content on the internet. Kudos!

thank you some much

Very nice article. Can you please update this article as PermGen memory space has been removed in Java 8.

Your article says that the permgen is NOT a part of the heap memory. But https://www.oracle.com/webfolder/technetwork/tutorials/obe/java/gc01/index.html says otherwise.