Object-Oriented Programming Concepts are very important for programming. Without having an idea about OOPS concepts, you will not be able to design systems in the object-oriented programming model.

What is Object-Oriented Programming Model?

The object-oriented programming model revolves around the concept of Objects. What is an Object? An object is an instance of a Class. It contains properties and functions. They are like real-world objects. For example, your car, house, laptop, etc. are all objects. They have some specific properties and methods to perform some action. What is a Class? The Class defines the blueprint of Objects. They define the properties and functionalities of the objects. For example, Laptop is a class and your laptop is an instance of it. 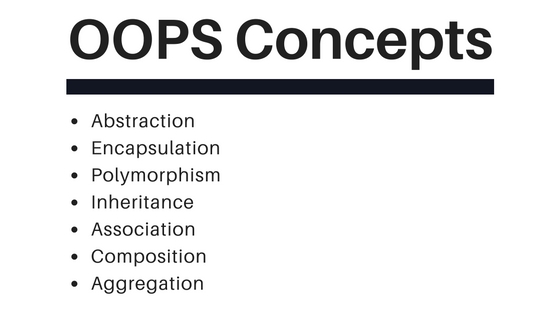 Let’s look into these object-oriented programming concepts one by one. We will use Java programming language for code examples so that you know how to implement OOPS concepts in Java.

Abstraction is the concept of hiding the internal details and describing things in simple terms. For example, a method that adds two integers. The internal processing of the method is hidden from the outer world. There are many ways to achieve abstraction in object-oriented programmings, such as encapsulation and inheritance. A Java program is also a great example of abstraction. Here java takes care of converting simple statements to machine language and hides the inner implementation details from the outer world.

Further Reading: What is Abstraction in OOPS?

Here we have multiple draw methods but they have different behavior. This is a case of method overloading because all the methods name is same and arguments are different. Here compiler will be able to identify the method to invoke at compile-time, hence it’s called compile-time polymorphism. Runtime polymorphism is implemented when we have an “IS-A” relationship between objects. This is also called a method overriding because the subclass has to override the superclass method for runtime polymorphism. If we are working in terms of the superclass, the actual implementation class is decided at runtime. The compiler is not able to decide which class method will be invoked. This decision is done at runtime, hence the name as runtime polymorphism or dynamic method dispatch.

Shape is the superclass and there are two subclasses Circle and Square. Below is an example of runtime polymorphism.

In the above examples, java compiler doesn’t know the actual implementation class of Shape that will be used at runtime, hence runtime polymorphism.

Aggregation is a special type of association. In aggregation, objects have their own life cycle but there is ownership. Whenever we have “HAS-A” relationship between objects and ownership then it’s a case of aggregation.

That’s all for a quick round-up on OOPS concepts.

You can go through more Java example programs from our GitHub Repository.

Thanks guy, I did appreciate your explanations. You helped me have clear ideas of the different concepts.

“Shape sh = new Circle(); sh.draw();” how to understand that it only can be done at runtime? i think as long as the complier is strong enough, the complier could also know which to call at complie time. thank you

Hi Pankaj, thank you very much for so much information about Java and all in the same place. It was great idea doing that. I have read lots of your articles. Allow me to point something that doesn’t sound right, when you say: “Shape is the superclass and there are two subclasses Circle and Square.” shouldn’t it be: “Shape is an interface and Circle and Square are implementations of it, which give us an Interface polymorphism.” ?

Thank you for sharing such an informative and useful post with us.