How to Use Vue.js and Axios to Display Data from an API
View

How To Build a Blog with Nest.js, MongoDB, and Vue.js
View

By Daniel Schmitz
Developer and author at DigitalOcean.

SPAs (Single Page Applications) often consist of dozens or even hundreds of components that can be divided into several JavaScript bundle files. The goal of this post is to show one way to do this division and how to load each file asynchronously, only when the component is requested from a route change. This asynchronous behavior is called lazy loading and allows for a smaller initial bundle size.

Let’s start a new project and use vue-cli 3 to create it according to the following command:

Tip: Choose to group all the config rules in the package.json file.

The project created has two views: Home.vue and About.vue. When we run the project, through the yarn serve or npm run serve command, the views are accessed through the top menu, similar to the following figure:

These two files, Home.vue and About.vue, are loaded when the application initializes. For a non-trivial projects with a lot of components, it’s often not viable to load all the files at once. We need to load the files as they are requested.

We can implement the lazy loading easily, thanks to an upcoming JavaScript feature, dynamic imports, that webpack supports. Currently, the src/router.js file has the following code:

To setup lazy loading, we change the src/router.js file to the following instead:

Here’s a breakdown of what we’ve changed:

1- We have removed the static imports for the home and about components.

2- We have created the loadview function, which uses the import function to dynamically import a Vue component.

3- In the import function, we have used /* webpackChunkName: "view-[request]" */ to mark the name of each file that will be imported dynamically.

4- The route configuration uses the loadView method, passing the name of the component.

This way, when we compile the project through npm run build or yarn build, we get the following result: 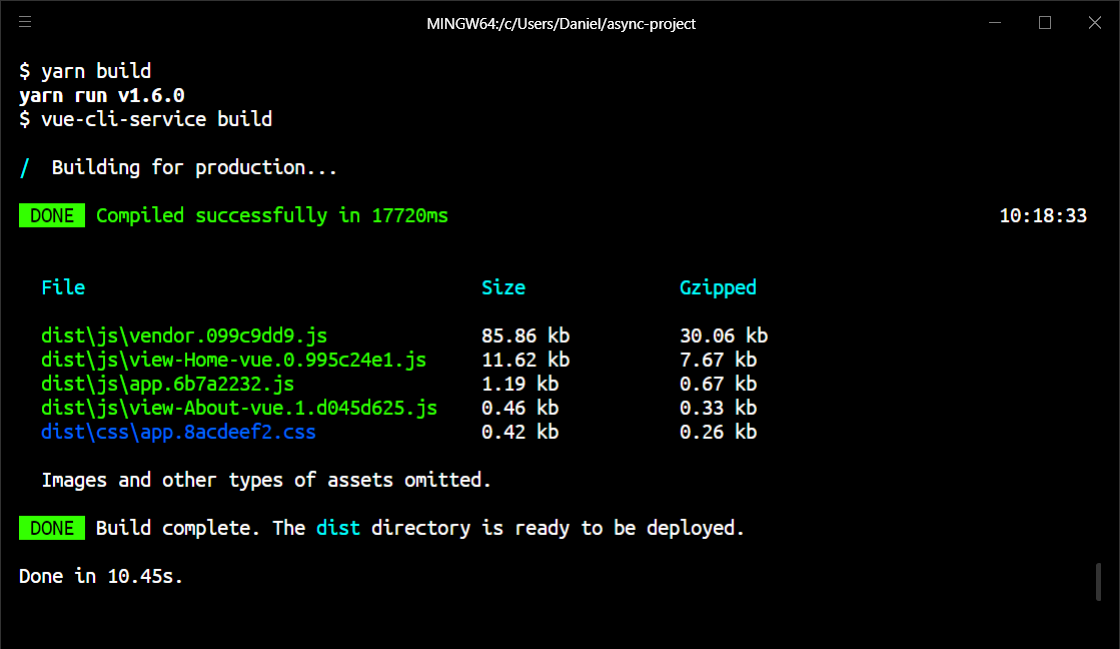 Notice that two files have been created: view-Home-vue... and view-About-vue.... They will be loaded on demand on the production server:

At the time of this writing, there’s a small ESLint due to the fact that it can’t recognize the import function, similar to the following figure:

To fix it, open the package.json file and add the following configuration: