How To Authenticate a Python Application with Twitter using Tweepy on Ubuntu 14.04

Published on February 4, 2015
By erm
Developer and author at DigitalOcean.

Having access to the Twitter API using Python can be extremely useful for promoting your brand (if you represent a business or organization), as well as incredibly enjoyable and entertaining (if you are an individual user or hobbyist programmer).

Before you begin, ensure you have completed the following prerequisites:

You will also require Python 2.7, which comes preinstalled on Ubuntu 14.04. To ensure you have the correct version (2.7.x), you can type the following command at your terminal:

In this step, we will install pip and Tweepy.

First, we will install pip.

This will set up python-pip on your system and allow you to install numerous other Python libraries using the pip command.

Next, we will install Tweepy using pip.

Note: Using sudo to install a Python library with pip will install it system-wide and make it available to all users.

We will now explain the process of creating a Twitter application and retrieving your API access keys and tokens. These tokens are what will allow you to authenticate your Python client application with Twitter. As mentioned in the prerequisites, you will require a valid phone number in order to create applications using Twitter.

You will now be redirected to the application creation page. Fill out the required form information and accept the Developer Agreement at the bottom of the page, then click the button labeled Create your Twitter application. 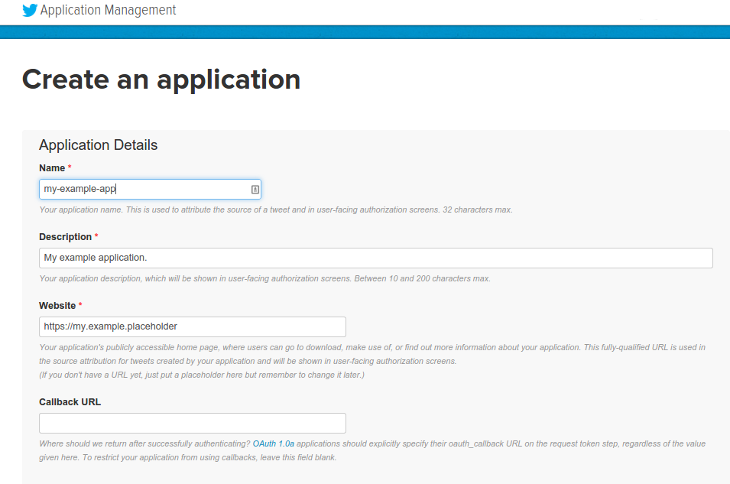 On this page, you’ll fill out the following fields.

You will also have to click the checkbox that says Yes, I agree underneath the Developer Agreement.

Click on the link labeled modify app permissions. You will then be able to choose which permissions to allow. Select Read and Write to allow your application to post on your account’s timeline. If you want to allow the API access to direct messages, select Read, Write and Access direct messages instead. 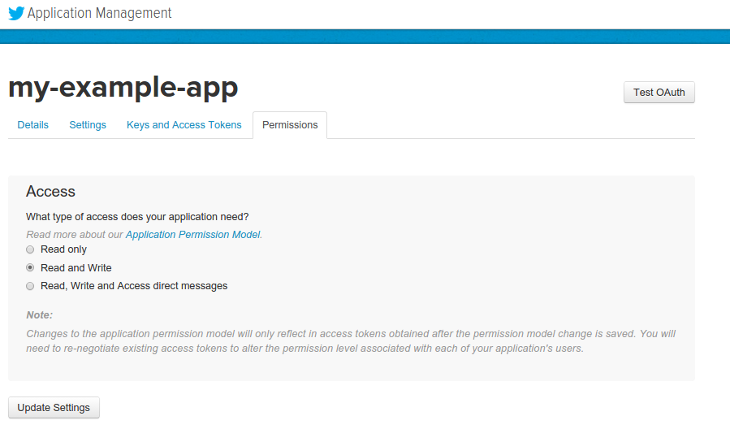 After updating your application’s permissions to allow posting, click the tab labeled Keys and Access Tokens. This will take you to a page that lists your Consumer Key and Consumer Secret, and also will allow you to generate your Access Token and Access Token Secret. These keys and secrets are necessary to authenticate our client application with Twitter. 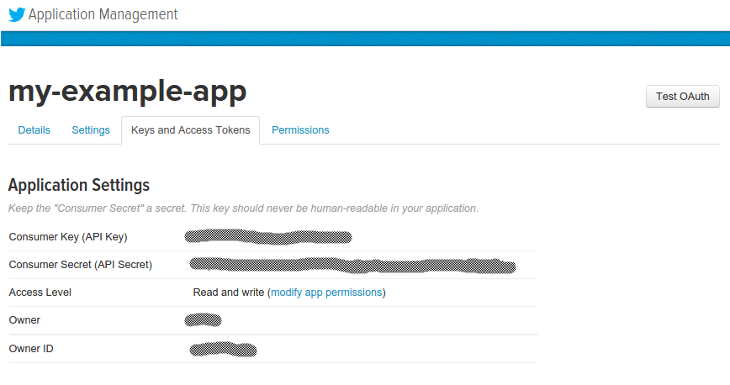 Step 4 — Create a Python application to authenticate with Twitter

After successfully creating your Twitter application and generating the necessary keys and tokens, you are now ready to create your client application for posting to your timeline. In this step, we provide you a simple “Hello World!” Python script to test your application.

Paste the following script into the editor. Replace the keys and secrets with your unique credentials from the Twitter apps website. You can also replace the “Testing!” status with whatever you’d like the test tweet to say.

Save the file, then run the script.

Ask a questionSearch for more help
Was this helpful?
2 Comments
Login to Comment
toyintuyi93 • July 1, 2019

I had my first tweet up within minutes and I’ve already written this into my IRC bot.