How To Deploy Wordpress with Shipyard on Ubuntu 14.04

By Romke van der Meulen
Developer and author at DigitalOcean.

Shipyard is a management tool for Docker servers. Docker is a cutting-edge piece of software used for containerization. Shipyard allows you to see which containers each of your servers are running, in order to start or stop existing containers or create new ones.

Once you’ve set up Shipyard on your server you can access it using a graphic interface, a command-line interface, or an API. Shipyard lacks some of the advanced features of other Docker orchestration tools, but it’s very simple to set up, free to use, and you can manage and host it yourself.

This tutorial covers how to install Shipyard, connect it to your Docker servers, and use it to create and launch new containers. By the end, you should have Shipyard running on your server to manage your Docker hosts.

You can find the Docker 1.5.0 image option on the Droplet creation page, in the Applications tab under Select Image. You can also install Docker on an existing Droplet by following this tutorial.

Note: the docker.io package from the standard repository for Ubuntu 14.04 is very old (version 0.9.1). To use Shipyard, you will need to install the most recent version of Docker using one of the methods listed above.

In this step, we will install Shipyard. The commands in this tutorial will all require root privileges, so it will be easiest to simply log in to your Droplet as the root user. If you’re logged in as a non-root user, you can run sudo su to switch to the root user.

Once you have Docker running, it is quite easy to install Shipyard because it ships as Docker images. All you need to do is pull the images from the Docker registry and run the necessary containers. First we will create a data volume container to hold Shipyard’s database data. This container won’t do anything by itself; it is a convenient label for the location of all of Shipyard’s data.

Now that the data volume container is created, we can launch the database server for Shipyard and link them together.

This launches a container running RethinkDB, a distributed database, and makes sure it can only be accessed locally on the server itself. If you try to visit http://your_server_ip:49153 in your browser, you shouldn’t see anything.

Now that Shipyard’s database is up, we can run Shipyard itself by launching another container and linking it to the database.

We can now access our running Shipyard instance using port 8080.

Now that Shipyard is running, we need to access it. Shipyard can be accessed via the GUI, command-line interface (CLI), or API. We’ll start by accessing the CLI.

We can get access to the Shipyard CLI by running another container.

The -ti flag makes sure the container is interactive, and the --rm flag makes this a disposable container, which means it will be automatically removed once we’re done with it.

You should now see the Shipyard CLI prompt, which looks like this: shipyard cli>. To get a list of available commands you can enter shipyard help.

This command prompt hasn’t been connected yet to the Shipyard instance that we set up in step 1, so let’s connect it first:

Now you’re logged in to your Shipyard instance as admin. Leaving the default password in place is a huge security risk, so let’s change it.

Next, we’ll take a look at Shipyard’s graphic interface. To access it, open http://your_server_ip:8080 in your browser. This should show you the login screen. Use the username admin and the new password you’ve chosen.

Once you’re logged in, Shipyard will display the Engines tab and warn you that there are no engines in your Shipyard cluster yet. An engine is a Docker host capable of running containers. Here we will add each Docker server that you want to manage with Shipyard.

The Droplet that we’ve just deployed Shipyard on is also a Docker host, so we’ll be able to manage it with Shipyard. Before we can do that; however, we’ll need to add the server to Shipyard as an engine.

By default, Docker is configured to listen on Unix socket /var/run/docker.sock, but that socket can’t be accessed from our Shipyard instance. We’ll need to configure Docker to also listen to requests on a port. To do this, edit the Docker configuration file using your favorite text editor. (Here, we use nano.)

At the end, add this line:

This will ensure that Docker accepts connections on port 4243, but only from your server itself. Now restart Docker to load the new configuration:

This will also restart your Shipyard containers. Since we ran the containers with --restart=always they should come back up automatically. You can verify this by running:

If for some reason the Shipyard containers didn’t restart, you can restart them manually by running docker start shipyard-rethinkdb shipyard.

Now that your Docker host is properly configured, we can add it to Shipyard as an engine. Access your Shipyard GUI and go to the Engines tab. Click on the + Add button. It will look like this:

Now click the Add button at the bottom. Shipyard will now connect to your Docker host, verify the connection, and add it as an engine. Once this is done, you’ll be directed back to the Engines tab. The engine will be listed as offline at first. Wait a second or two and refresh the page, and you should now be able to see the details of your Docker host.

Now that we’ve added our Docker host to Shipyard as an engine, we can use Shipyard to start, stop and deploy containers.

Access the Shipyard GUI and take a look at the Containers tab. This lists all containers running on every Docker host you’ve added to Shipyard. If you’ve done nothing else, this tab should show at least three containers, of which two are running:

Click the + Deploy button. The next screen will allow us to configure the container to deploy. Enter the information in the fields specified below. 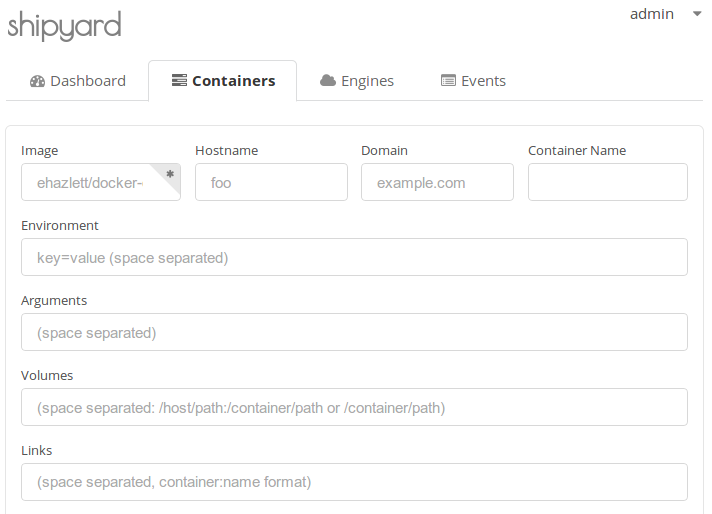 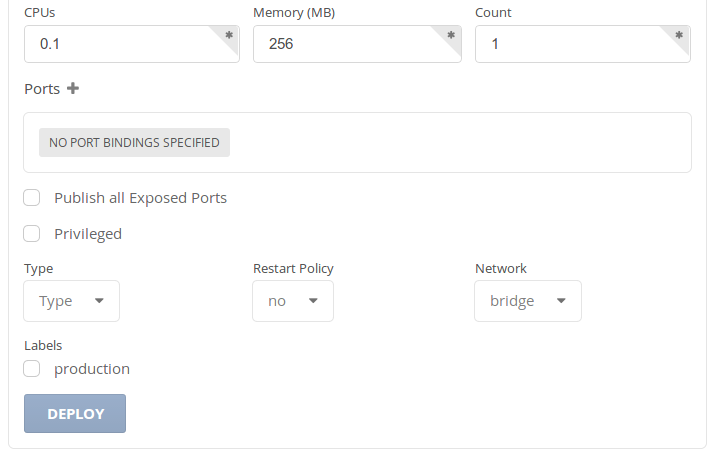 Now click on Deploy. It will take a while for the container to launch. You should be redirected back to the container list, which should now have a container named mysql-test (or whichever name you used) in it.

Now we’re going to use the same process to deploy a WordPress container, linked to our MySQL container. Click the + Deploy button again and fill in the following:

There’s one more thing to do: we want to be able to reach this WordPress container’s web content from anywhere, so we have to expose its port 80. To do this, click on the plus sign next to the heading Port.

Now you can click Deploy. Once again it will take a while before you’ll be redirected back to the container list. The list should now also show a container named wordpress-test. Click the link next to it to see more details. 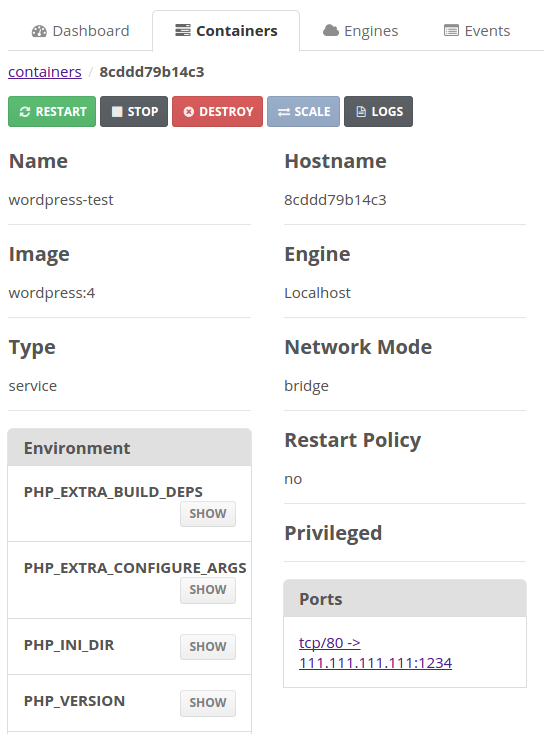 Under Ports, you’ll see that the WordPress container’s port 80 is now published to your server’s port 1234. Shipyard is helpful in directly making this listing a clickable link which you can use to go to the published address.

Click this link. This will bring you to the WordPress installation wizard. Once you fill out the fields on that page, you’ll be able to log in to your brand new WordPress blog and also see it as a website.

Now you’re free to try out any of the thousands of web applications available on the Docker Registry. For instance, you can deploy an Nginx container to host your new WordPress blog on a more readable URL as described in this tutorial.

Hello, I got error at step using shipyard login. After input URL, username and password, it said FATA [0019] Post https//my-server-ip:8080/auth/login: dial tcp connection refused Someone please tell me what to do next.

Thanks for great article!

P/S, For anyone has these issues:

You need to enable port 2375 (or 4243 as this article) for binding Docker. Start Docker with this:

“The username and password are set by default; enter admin for the username, and shipyard for the password.” Are you shure about this login/password. Becouse I can’t login . Output: shipyard cli> shipyard login URL: http://192.168.0.71:8080 Username: admin Password: FATA[0019] invalid username/password

This tutorial is awesome. I just needed 15 minutes to setup all of it. It helped me and i learned a lot about a new docker organize feature.

But i have one question: Imagine i have 2 wordpress blogs:

How can i serve wordpress1 and wordpress2 without setting the ports in the url?

Thank you very much.

I was able to get all of this up and running - great tutorial!

However, I’m having an issue logging in via the GUI. I’ve changed my password a couple of times to test. Everything is fine from the command line, but the GUI just reloads and leaves me stuck at the login page. No error.

I’ve opened an issue on Github but was wondering if you had run across this issue at all?