How To Install HHVM with Nginx on Ubuntu 14.04

By Toli
Developer and author at DigitalOcean.

HHVM is an open source virtual machine for executing PHP and Hack code. HHVM is developed and supported by Facebook, a fact which draws more and more attention to HHVM lately.

HHVM is different from other PHP engines because of its just-in-time (JIT) compilation approach. HHVM compiles PHP code into an intermediate byte code and then directly into x64 machine instructions. This allows more optimizations and higher performance compared to the way other engines work.

HHVM is powerful and fast, but it’s also demanding in terms of resources, just as any other virtual machine (e.g. JVM). Thus, HHVM requires more RAM and CPU in comparison to other more lightweight PHP interpreters such as PHP-FPM. Our tests showed that decent performance requires a Droplet with at least 1 GB RAM.

In this article we’ll show you how to install HHVM and integrate it with Nginx.

This guide has been tested on Ubuntu 14.04. The described installation and configuration would be similar on other OS or OS versions, but the commands and location of configuration files may vary.

For this tutorial, you will need:

All the commands in this tutorial should be run as a non-root user. If root access is required for the command, it will be preceded by sudo.

For Ubuntu 14.04 there is an officially supported HHVM repository. To add this repository you have to import its GnuPG public keys with the command:

After that you can safely install HHVM’s repository with the command:

Once you have the repository added you have to make apt, Ubuntu’s software manager, aware that there are new packages which can be installed with it. This can be done by updating apt’s cache with the command:

Finally, you can install HHVM with the command:

The above command installs HHVM and starts it for the first time. To make sure HHVM starts and stops automatically with the Droplet, add HHVM to the default runlevels with the command:

HHVM comes with a script which makes the integration with Nginx very easy. Provided you have a default Nginx installation, you can run the script without any arguments like this:

The above means that Nginx should use HHVM to process any .php or .hh (hack) requested file.

You will also need to restart Nginx to enable the change:

In the above configuration you may notice the variable hhvm.server.port which determines that HHVM will be listening on TCP port 9000. Furthermore, unless otherwise specified, it will listen on localhost by default.

HHVM is considered for environments under heavy load so the first configuration change you can do is to make HHVM listen to a socket instead of a TCP port. Thus, the communication between Nginx and HHVM will require less CPU and memory.

To configure HHVM to listen on a socket, open the file /etc/hhvm/server.ini in your favorite editor such as with vim:

Then remove the line starting with hhvm.server.port, and in its place add the following one:

Save the configuration file, and restart HHVM with the command:

Next, you have to make Nginx aware of this change. For this purpose open the file /etc/nginx/hhvm.conf for editing:

In this file make sure that the fastcgi_pass directive points to the HHVM socket and looks like this:

You will have to restart Nginx too for this change to take effect. For this purpose use the command:

The script /usr/share/hhvm/install_fastcgi.sh can save you some time, but there are things you have to adapt manually, especially in regards to your Nginx server blocks. For example, the default server block configuration opens as index files only index.html and index.htm files while directory listing is forbidden. This is one thing you should change for sure and include index.php files as index files too. To do this open again the configuration file for the default server block with your favorite editor:

Then go to the server part and add index.php at the line with indexes so that it looks like this:

Restart again Nginx for this setting to take effect:

The first test you can perform is with the PHP command line interface (cli) /usr/bin/php which points to /etc/alternatives/php, which in term points to the HHVM binary /usr/bin/hhvm.

When you run the above command you should see printed HHVM’s version and repository information like this this:

If you have had PHP installed before HHVM, you may still see the output from the old PHP. To change this and make it point to HHVM run the command:

Next, you can use the well-known phpinfo() function to see HHVM’s settings and options. For this purpose create a new file called info.php inside your default document root — /usr/share/nginx/html with your favorite editor.

The new file should contain:

It is always a good practice to make sure that all Nginx web files are owner by the Nginx user www-data. Thus change the ownership of this file to www-data with the command:

Now try to access this file at your Droplet’s IP. The URL to put in your browser should look like http://your_server_ip/info.php.

The result in your browser should look like this: 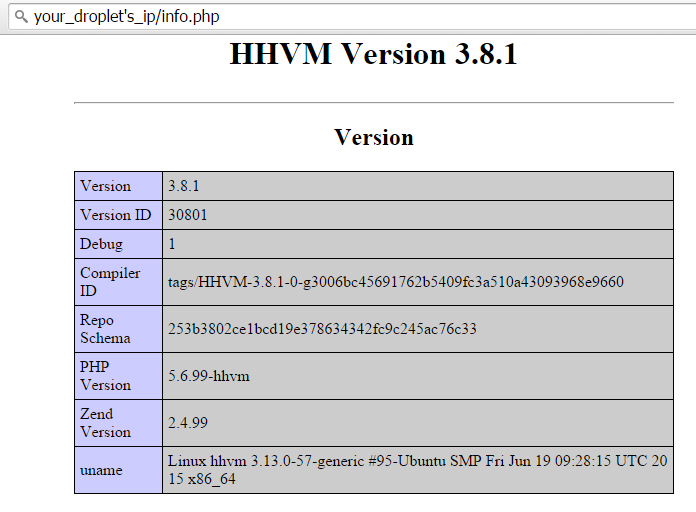 If you don’t see a similar page then first make sure that you have followed correctly the installation instructions from the prerequisites. Second, look for errors in the error log of Nginx (/var/log/nginx/error.log) and HHVM (/var/log/hhvm/error.log).

Going back to your browser, you may notice that this page is similar to the one produced by phpinfo() with the usual PHP. In fact, most of the variables are identical to those from the usual PHP with the exception of the HHVM-specific variables starting with the hhvm. prefix.

While exploring the variables note that memory limit is equal to 17179869184 bytes which is a little bit over 17 GB. Such a high memory resource limit will certainly kill a Droplet with a few GB of RAM, making it unresponsive. You should decrease this value to a value lower than the available RAM of your Droplet to ensure that other services on the Droplet will not suffer from lack of RAM.

As a general example, if your Droplet has 2GB of RAM it should be safe to dedicate around 1.2 GB to HHVM. To make this happen, edit the file /etc/hhvm/php.ini with your favorite editor (sudo vim /etc/hhvm/php.ini) and add a new variable after the ; php options section:

In a similar way, you can modify any PHP setting and variable to your needs and liking. Just make sure to restart HHVM after every change with the command:

Next, you can perform a more complex test with a common web application. It’s important to know that HHVM is not 100% compatible with the usual PHP nor with all popular PHP frameworks. Our tests during the writing of this article showed that many PHP web applications, such as WordPress, seem to work fine. However, officially, the number of supported frameworks is limited.

When you test with a complete framework/web application there should be nothing HHVM-specific to consider. The installation and operational instructions should be the same as for a regular LEMP stack. This is because, by default, HHVM comes bundled with all most PHP modules providing good compatibility.

Still, in some rather rare cases you may need to install an additional module for HHVM. For example, if you use PostreSQL as a database server you will need the pgsql module. In such cases consult first HHVM’s official documentation even though it may forward you to a third party resource, such as in the case of pgsql.

As this article showed, HHVM can be easily installed, configured, and integrated with Nginx. If you have enough resources you should definitely give it a try and see how HHVM’s unique JIT compiler works for you in terms of performance and stability. There must be a good reason for a site like Facebook with complex functionality and unmatched traffic to trust it. However, for smaller sites with less traffic you may find a lower memory footprint solution such as PHP-FPM still a better choice.

after setting hhvm to listen on sockets , i keep getting error 502 for info.php and the log file shows

*63 connect() to unix:/var/run/hhvm/hhvm.sock failed (2: No such file or directory) while connecting to upstream,

I’ve translated it into Chinese: https://bohan.life/how-to-install-hhvm-with-nginx-on-ubuntu-14-04/

Thanks for the tutorial! However, I need to replace one more line in /etc/nginx/sites-enabled/default

Otherwise, I’ll get this error:

Otherwise I was getting connect() to unix:/var/run/hhvm/hhvm.sock failed (2: No such file or directory) This post should probably reflect that.

Hi, I’ve configured everything like described in the article, but I’m struggling with 502 error now.

hhvm service is working still it didn’t fell down. However if I restart hhvm I have same situation as in 3-4 step.

I have already removed php5-fpm, so it’s not because of it. Also, I’ve checked that hhvm is running on 9000 port.

How can I fix it?

Hey I got the following error when I tried longer route as my nginx config file was modified. tail /var/log/nginx/error.log

I realized that the server was not listening to the IP, probably this was due to IPv6 implementation.

if i dedicate 1.2GB RAM to HHVM what will MYSQL use? nginx? others?

Thank you!! I love this tutorial as I’m building a droplet using it.