An Introduction to Kubernetes
View

By Brian Boucheron and Savic
English

Helm is a package manager for Kubernetes that allows developers and operators to more easily configure and deploy applications on Kubernetes clusters.

Helm packages are called charts, and they contain templates of resource definitions that deploy and configure given apps with minimal effort required from the user. With templating, you can manage the chart, its settings and behavior by passing in variable definitions without modifying the actual chart. Customized resource definitions, as well as modifications to already deployed definitions, Helm automatically manages. A deployed chart, with possible customizations, is called a release.

In this tutorial, you’ll set up Helm 3 and learn how to install, upgrade, roll back, and manage charts and releases. You’ll also learn to create and package your own charts, as well as set up chart repositories, which host charts that you can install right away.

When you are connected to the correct cluster, continue to Step 1 to begin installing Helm.

Start off by navigating to /tmp, where you’ll store the install script by running:

You can examine get_helm.sh in your text editor to ensure it’s safe.

Make it executable by setting its permissions to the following:

Finally, run it to install Helm 3:

You have Helm 3 installed on your machine. You’ll now learn about chart repositories and how to use them.

Helm charts are stored in chart respositories that it is possible for anyone to host. By default, Helm 3 does not come preconfigured with any repository. Previous versions of Helm included a central curated chart repository; however, Helm 3’s design deliberately evolved to chart developers managing their own repository, allowing for more freedom and quicker releases. This means that for each chart you wish to use, you’ll need to make sure that you add the hosting repository to your Helm installation.

To help you find the right repository, you can use ArtifactHub.io, an open source website managed by the CNCF that catalogues Helm charts and their repositories. It also tracks popular and useful charts that other CNCF projects use, so it differs from the stable repository that previous versions of Helm worked from. For common projects, such as Nginx ingresses or monitoring tools, it’s a great source.

You can search for a chart that you’d like to install via the home page. Searching for nginx will show all indexed charts that are related to it.

You’ll install the community edition managed by the Kubernetes team. Search for ingress-nginx to find it in your results. Select it to access its page.

Each chart should have a description detailing what it does, coupled with commands for adding its repository to your installation and installing the chart. If it does not, you can still get the necessary commands by pressing on the INSTALL button on the right of the page. 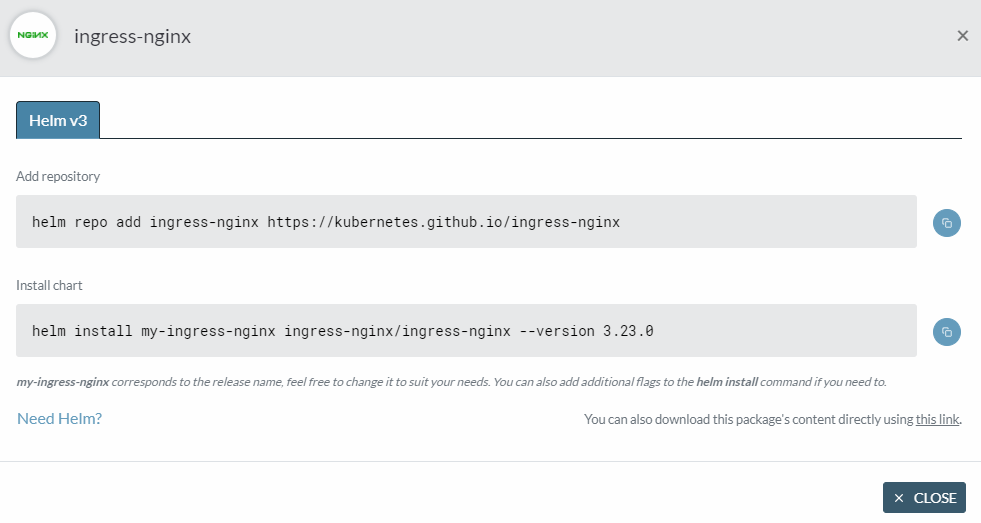 You can click the blue button next to a command to copy it. Do so for the first command, and run it:

To add a repository to Helm, you run helm repo add. The parameters it accepts are the name of the repo and its location.

When you add a new repo, you need to let Helm know what it contains by running:

You’ll receive the following output, showing that the update was successful:

In this step, you’ve learned about ArtifactHub and what it offers. You’ve also added a new repo to your Helm installation. In the next step, you’ll install a Helm chart.

In the previous section, you’ve added the repo for the ingress-nginx chart. You’ll now install it to your cluster.

Each chart has configuration variables that you can set to modify its behavior. These variables are stored in a file called values.yaml that is part of the chart. Unless you’ve downloaded the chart to your machine, you’ll have to run the following command to view it:

The output will be long showing the contents of values.yaml for ingress-nginx.

To install a chart, you can use helm install:

A release is a deployed instance of the chart, and here you’re calling it ingress-nginx.

This command would install the chart to your cluster with the default values of variables. If you wish to modify some of them, you can pass in the new variable values using --set:

You can repeat --set for as many variables as you need. Since we won’t be customizing it now, install it as is by running:

The output will be similar to the following:

Note that the NAME corresponds to the name of release you’ve specified. Helm also lists common information, such as the release status and namespace in which it’s deployed. The NOTES section varies between charts, and usually contains quick-start guidance or warns of some common pitfalls when using the chart’s resources. Here, it notes that the Load Balancer is being created and that it may take some time to complete.

You’ll find that ingress-nginx is the only deployed chart at the moment:

You can find the services it has in your cluster by running:

Now that you’ve deployed a release to your cluster, you’ll modify its configuration while it’s deployed.

Once a release is deployed, you don’t have to tear it down and redeploy completely when you need to change its configuration. You can use the helm upgrade command to upgrade the release with a new version of the chart, or to set new settings.

The ingress-nginx chart exposes the controller.replicaCount variable that controls the number of deployed controller pods. By default, it’s set to one, which you can verify by listing the available pods:

If you want more to be deployed for redundancy (for instance, three), you can upgrade the release and set the variable to 3 by running:

You also pass in --reuse-values, which instructs Helm to base your changes on top of the deployed release, preserving the previous configuration.

In the output, Helm will bump the revision to signify that the release has been upgraded:

You will find three pods listed, instead of one:

Next you’ll roll back changes and delete releases altogether.

Step 5 — Rolling Back and Deleting a Release

When you upgrade a release, its revision number is incremented. Internally, Helm stores all revisions of a release, allowing you to return to a previous revision if needed.

To revert the number of pods to just one, you could run helm upgrade again and manually set the number because it’s a small change. However, when working with bigger charts with many variables, manually reverting is not feasible and should be automated.

To roll back a release, use helm rollback:

You can use it to revert the changes you made to ingress-nginx by rolling back to revision 1:

You will receive the following output, indicating that the action was successful:

You can check the current revision by listing the releases:

You’ll find that the revision is now 3, and not 1:

Helm regards every change, including rollbacks, as a new revision to a release. You can check that revision 3 is equal to the first one by checking the number of deployed pods by running:

To delete a release and all its revisions, you can use helm delete:

Since you won’t be needing it anymore, delete ingress-nginx by running the following command:

You can list the releases to check that there are none:

The output table will have no rows:

Now that the release is deleted, you can reuse its name for future deployments.

In this optional step, you’ll learn how to create a custom chart, where to put your resource definitions, and how to package it for further distribution.

This will create a new directory called example-chart with the following files and structure:

The resource definitions that your chart will install on target clusters are located in the templates directory. The default ones Helm created as a starting point deploy an Nginx ingress controller. Even though their file extension is YAML, they use Go’s templating syntax to stay customizable via exposed variables that you can pass in. You can verify by showing the contents of service.yaml by running:

You’ll find that it has templating directives for generating values surrounded by double braces:

The referenced variables are exposed to the user and defined in values.yaml. The NOTES text Helm shows after deployment is stored in NOTES.txt, and is also templated. Chart metadata, such as name, version, and version of software being deployed, is specified in Chart.yaml:

To check what Helm would deploy, you can pass in --dry-run and --debug to helm install pointing at the chart directory:

The output will be long and contain all the final resource definitions that would get applied to your cluster. While you’re working on your chart, you can use helm upgrade to push new versions to Kubernetes.

When it’s time to share your finished chart, you can package it for distribution by running:

The packaged chart can be installed just like the ones from added repositories:

In this step you’ve created a custom chart and deployed it. You’ve also packaged it, and learned about its structure.

You now know how to use Helm to install and upgrade software deployed to your Kubernetes cluster. You’ve added chart repositories, and learned why they’re important and how ArtifactHub can help you find them. You’ve also created a new custom chart and learned about release revisions and how to roll back if necessary.

$ helm repo add stable https://charts.helm.sh/stable “stable” has been added to your repositories