How To Install an Upstream Version of Node.js on Ubuntu 12.04
View

How to Use Node.js and Github Webhooks to Keep Remote Projects in Sync

When working on a project with multiple developers, it can be frustrating when one person pushes to a repository and then another begins making changes on an outdated version of the code. Mistakes like these cost time, which makes it worthwhile to set up a script to keep your repositories in sync. You can also apply this method in a production environment to push hotfixes and other changes quickly.

While other solutions exist to complete this specific task, writing your own script is a flexible option that leaves room for customization in the future.

GitHub lets you configure webhooks for your repositories, which are events that send HTTP requests when events happen. For example, you can use a webhook to notify you when someone creates a pull request or pushes new code.

In this guide you will develop a Node.js server that listens for a GitHub webhook notification whenever you or someone else pushes code to GitHub. This script will automatically update a repository on a remote server with the most recent version of the code, eliminating the need to log in to a server to pull new commits.

Step 1 — Setting Up a Webhook

We’ll start by configuring a webhook for your repository. This step is important because without it, Github doesn’t know what events to send when things happen, or where to send them. We’ll create the webhook first, and then create the server that will respond to its requests. 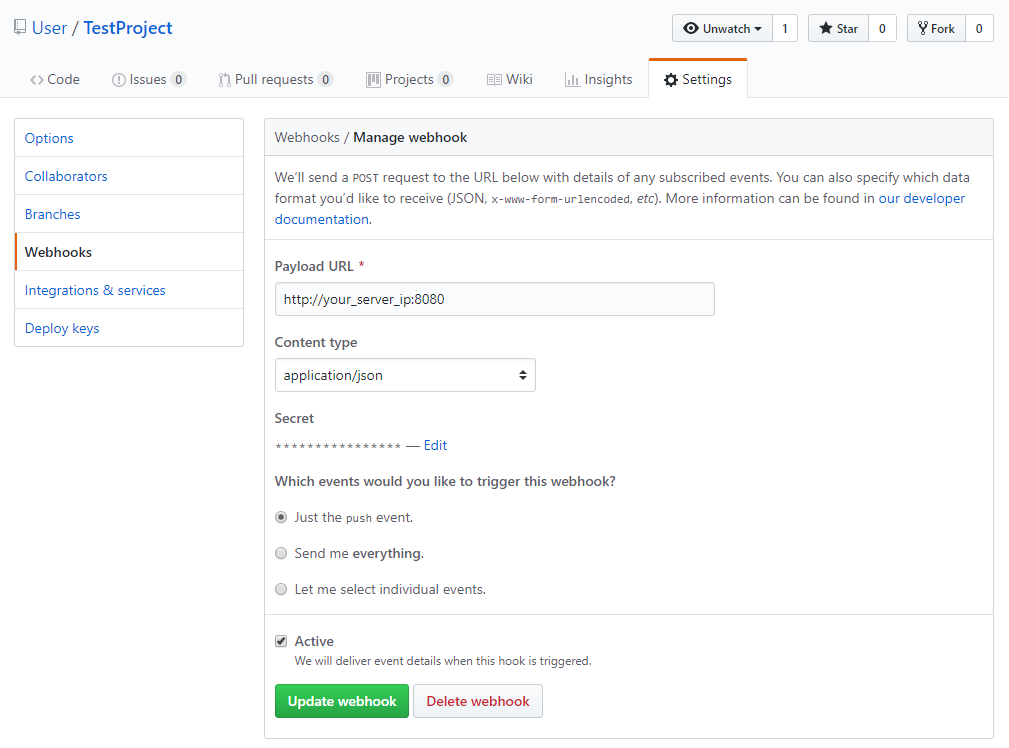 The ping will fail at first, but rest assured your webhook is now configured. Now let’s get the repository cloned to the server.

Step 2 — Cloning the Repository to the Server

Our script can update a repository, but it cannot handle setting up the repository initially, so we’ll do that now. Log in to your server:

Ensure you’re in your home directory. Then use Git to clone your repository. Be sure to replace sammy with your GitHub username and hello_hapi with the name of your Github project.

This will create a new directory containing your project. You’ll use this directory in the next step.

With your project cloned, you can create the webhook script.

Let’s create our server to listen for those webhook requests from GitHub. We’ll write a Node.js script that launches a web server on port 8080. The server will listen for requests from the webhook, verify the secret we specified, and pull the latest version of the code from GitHub.

Navigate to your home directory:

Create a new directory for your webhook script called NodeWebhooks:

Then navigate to the new directory:

Create a new file called webhook.js inside of the NodeWebhooks directory.

Add these two lines to the script:

Next, add these lines which import the http and crypto libaries into the script. We’ll use these to create our web server and hash the secret so we can compare it with what we receive from GitHub:

Next, include the child_process library so you can execute shell commands from your script:

Next, add this code to define a new web server that handles GitHub webhook requests and pulls down the new version of the code if it’s an authentic request:

The http.createServer() function starts a web server on port 8080 which listens for incoming requests from Github. For security purposes, we validate that the secret included in the request matches the one we specified when creating the webhook in Step 1. The secret is passed in the x-hub-signature header as an SHA1-hashed string, so we hash our secret and compare it to what GitHub sends us.

If the request is authentic, we execute a shell command to update our local repository using git pull.

If you followed the initial server setup guide, you will need to allow this web server to communicate with the outside web by allowing traffic on port 8080:

Now that our script is in place, let’s make sure that it is working properly.

We can test our webhook by using node to run it in the command line. Start the script and leave the process open in your terminal:

Return to your project’s page on Github.com. Click on the Settings tab in the top menu bar on your repository’s page, followed by clicking Webhooks in the left navigation menu. Click Edit next to the webhook you set up in Step 1. Scroll down until you see the Recent Deliveries section, as shown in the following image:

Press the three dots to the far right to reveal the Redeliver button. With the node server running, click Redeliver to send the request again. Once you confirm you want to send the request, you’ll see a successful response. This is indicated by a 200 OK response code after redelivering the ping.

We can now move on to making sure our script runs in the background and starts at boot. Use CTRL+C stops the node webhook server.

Step 5 — Installing the Webhook as a Systemd Service

systemd is the task manager Ubuntu uses to control services. We will set up a service that will allow us to start our webhook script at boot and use systemd commands to manage it like we would with any other service.

Add the following configuration to the service file which tells systemd how to run the script. This tells Systemd where to find our node script and describes our service.

Make sure to replace sammy with your username.

Enable the new service so it starts when the system boots:

Ensure the service is started:

You’ll see the following output indicating that the service is active:

You are now able to push new commits to your repository and see the changes on your server.

From your desktop machine, clone the repository:

Make a change to one of the files in the repository. Then commit the file and push your code to GitHub.

The webhook will fire and your changes will appear on your server.

You have set up a Node.js script which will automatically deploy new commits to a remote repository. You can use this process to set up additional repositories that you’d like to monitor. You could even configure it to deploy a website or application to production when you push your repository.

I have a private GitHub repo I am trying to pull, the pull isn’t working. I’m guessing that is because it’s failing to authenticate with my UN/PW.

Any suggestions for dealing with private repos?

I have a private repo and it asks for username and password on successful push. Any idea how to do this?

Thanks for the tutorial here, great guide, and clear to follow!

I am using node instead of nodejs to execute.

The webhook.service approach didn’t seem to work and so I resorted to using pm2 which runs other applications anyhow. Perhaps it is something to do with that I run the webhook service under one user, and the webhook navigates into other users directories …

I found the following to be useful in avoiding SSH prompting for a passphrase: https://www.thegeekdiary.com/how-to-avoid-ssh-from-prompting-key-passphrase-for-passwordless-logins/

Other than that, all good - thank you!

If your repo is private, you can use Deploy Keys on your server.

I had one issue. My repository is located in my home dir on the webserver and the web site is located in /var/www/html. To ensure the changes are pushed from the repository to the site I amended the webhooks.js script with the following under the if statement.

the script updatesite.sh then contains

And post-receive is as per the guide

This avoids having the git repository in /var/www/html etc.

Question(s). Is this the best way to achieve this ? Any issues I should be aware of ?

Hey Brian, thank you for a helpful tutorial. I’ve got it to work mostly, but I’m having a problem during the check: req.headers[‘x-hub-signature’] == sig

I printed the two out, and they are somehow different, so the pull is not triggered. Do you have an idea why that might be? I checked the ‘secret’ in my GitHub webhook and in my project, and they are the same.

Do you happen to know how to create the webhook.service on AIX?

I used the dotenv library to store the port, secret, and repo directory in a .env file. That way I could keep my webhook listener project in GitHub without having to store any confidential info in my repo. I also wanted to keep the port number secret, just in case someone tried to do something fishy, there. So my final code looked like:

Everything worked great when I was testing, but when I actually ran the service, I got undefined for all of my process.env.* variables. It turns out that the service is not able to pull in the .env file from the local directory. As a workaround, I was able to specify the location of the .env file in the require() statement like this:

Thanks for a great tutorial!

I have gotten to the end of this tutorial although I cannot seem to have the changes pushed to the GitHub repository show on the DigitalOcean Server. All my web hooks are being delivered on Git, does anyone have an inkling of the issue?

Well now that’s what I’ve been looking for. Can you please explain this line though?

I don’t think I understand it correctly. Trying to set thing up for a gaming system at ruby fortune. Almost done, but having some troubles with Node.js. Actually, I did get it, thank to your guide but still… have no clue what that line means.