How To Debug Go Code with Visual Studio Code

This tutorial will discuss the steps necessary to debug Go code with Visual Studio Code. It will entail installing extensions, analysis tools, and debuggers.

First, we will create a sample application. Then, we will explore using breakpoints and conditional breakpoints.

With this skillset you will be better equipped to understand the value and state of your application at specific points in its code execution.

Once you have the plugin installed, open any .go files in VS Code. You will be prompted on the bottom right of the status bar to Install Analysis Tools. Click on that link to install the necessary Go packages for the plugin to work efficiently.

We finally need to install Delve, an open-source debugger for Go. To do this, there are detailed installation instructions for specific platforms.

We’ll use two examples to debug our Go code:

Here’s the source code for the first example. Create a file main.go:

Here we are defining a struct Avenger, and then creating an array of Avengers, changing the status of one of them to "alive", then converting the results to JSON, and finally printing it to STDOUT.

You can run the app with:

It will produce this output:

A configuration file is created under .vscode/launch.json with the contents shown above. Change the configurations program to point to the main.go file. In this instance, since we only have a main.go file, we can change it to our workspace root:

Next we need to add a breakpoint, because that’s what debugging is all about.

Let’s add a breakpoint on Line 21 (func main()) by clicking to the left of the line number. There, you will see a red dot. 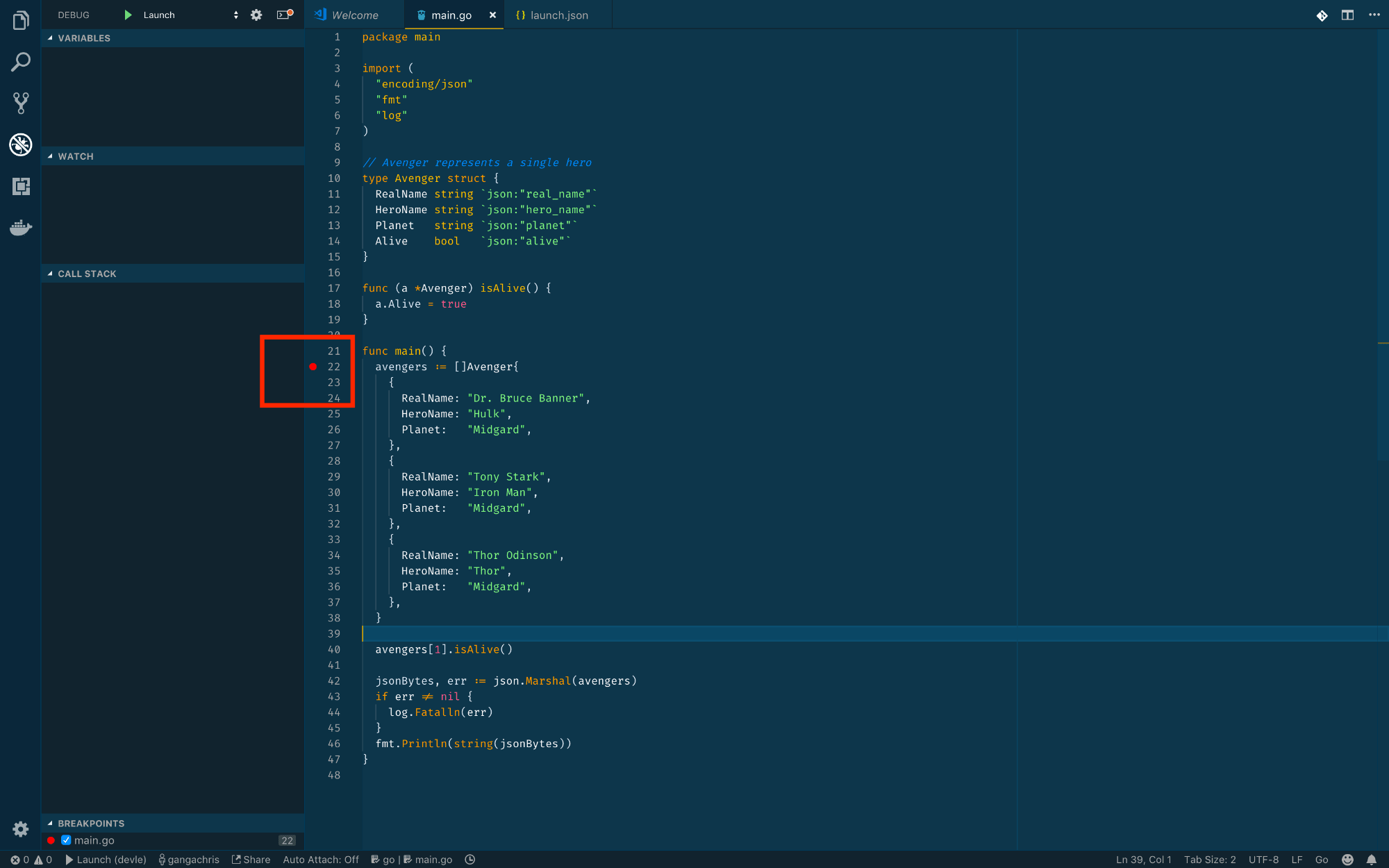 Next, either press F5 or click on the Launch button with a green play button on the Debug Section on the top left to open the Debug View. 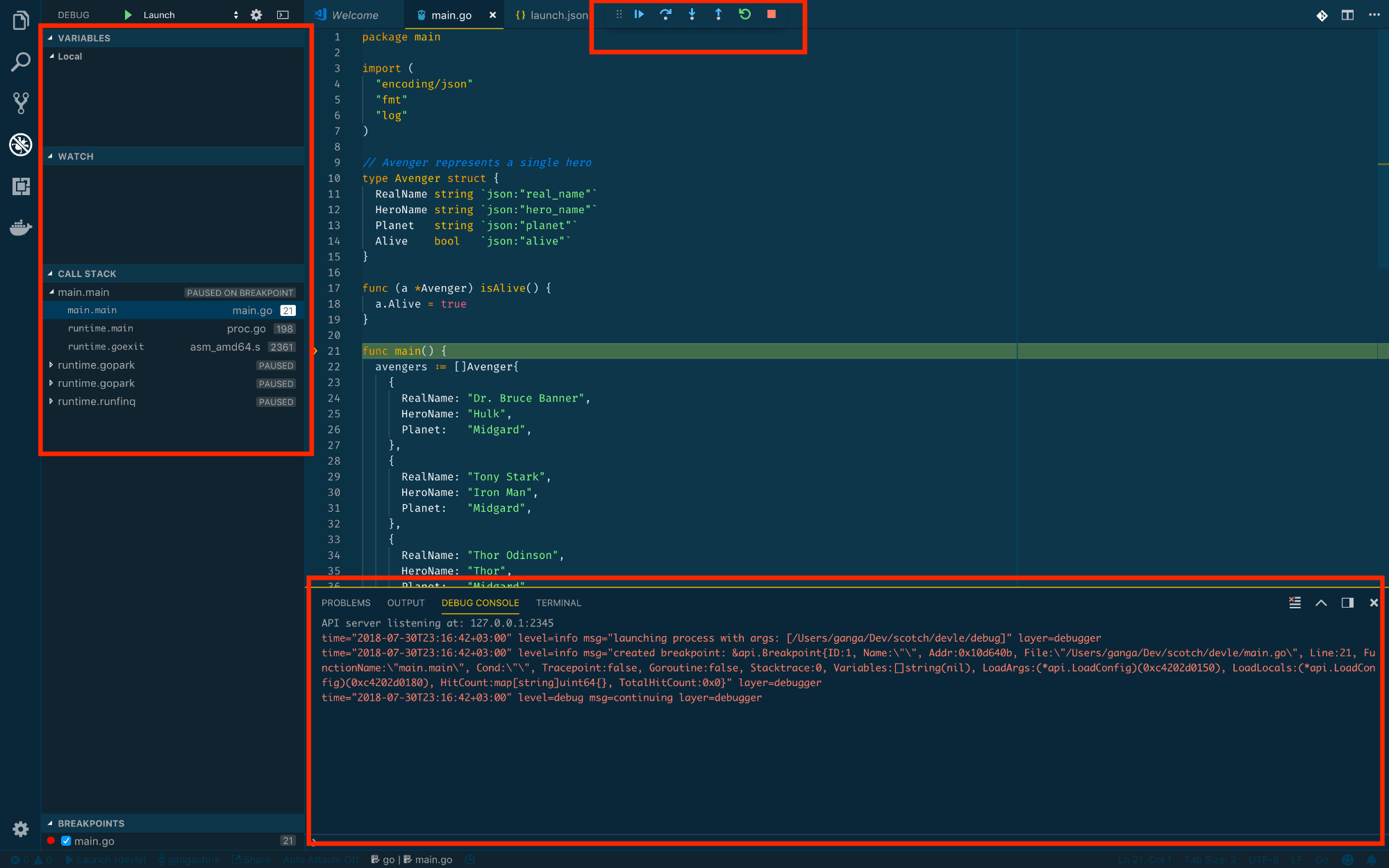 Click multiple times on the Step Over button on the Debug Toolbar.

The debugger will eventually move to Line 40. 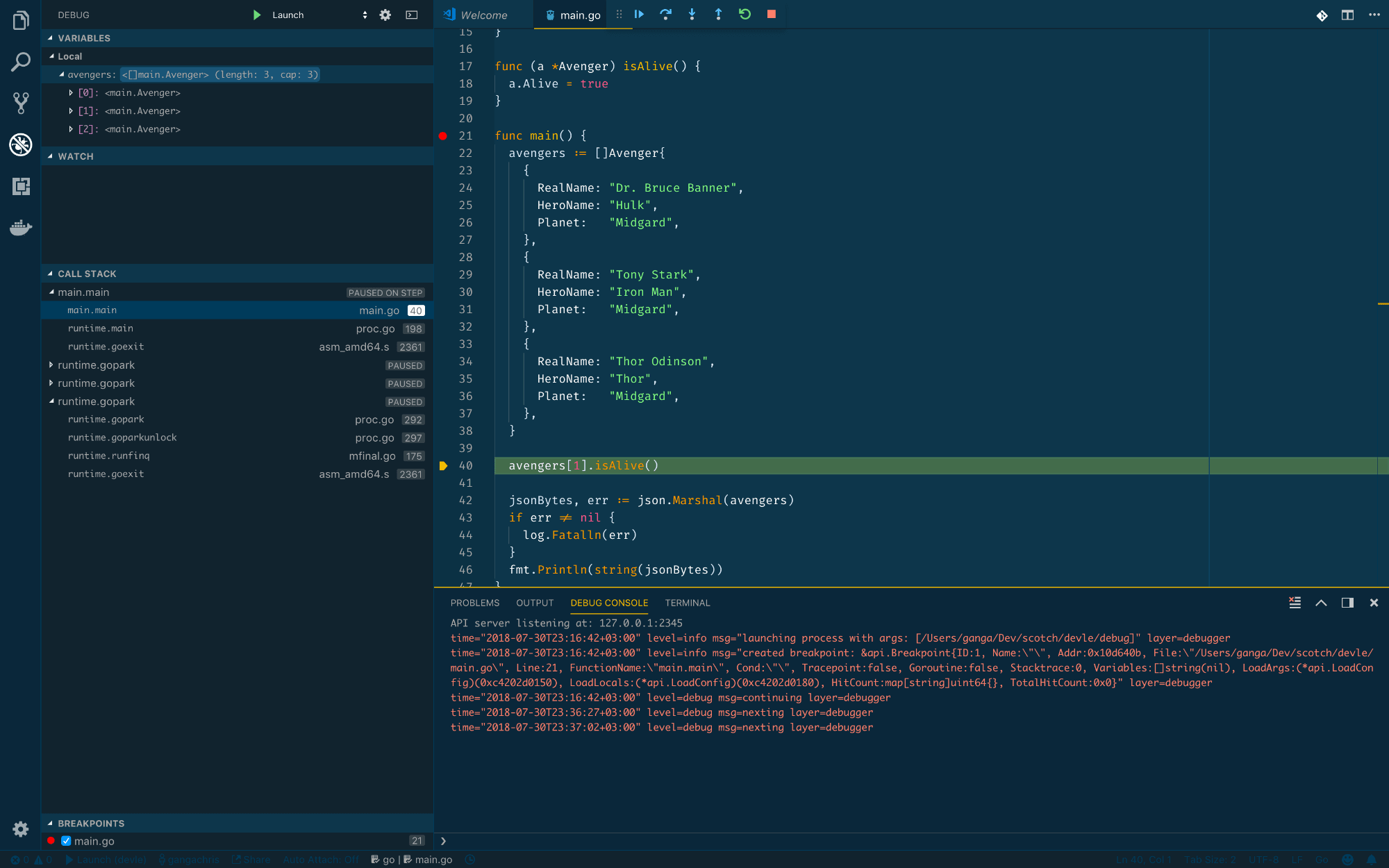 The Debug Section on the left will give us the state of the current breakpoint position. 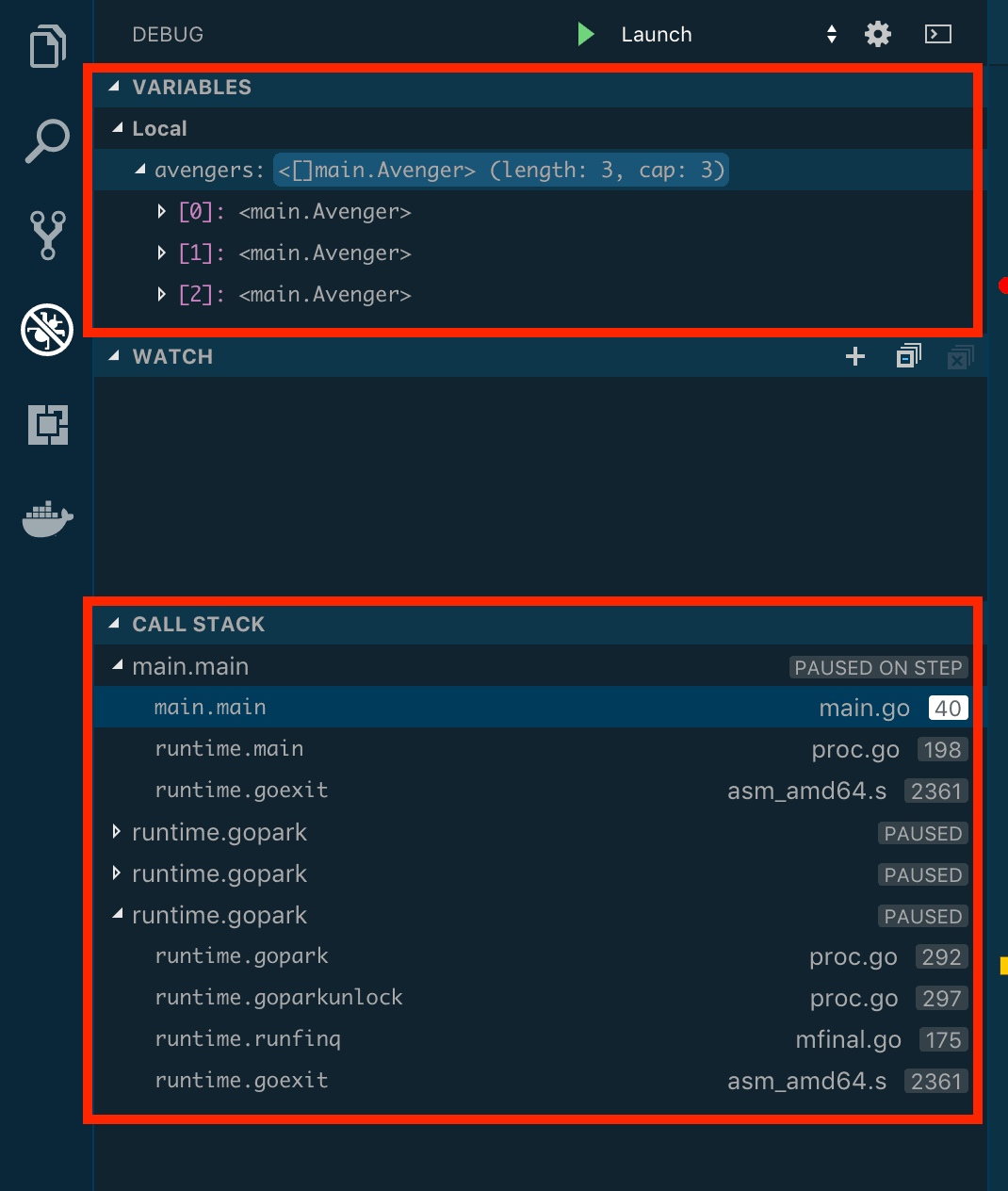 We can see the state or value of the variables, at that particular time in the Variables section.

We can also see the the call stack, and at the moment the running function is the main function, and Line 40.

You can continue Stepping Over, you’ll see the value of avengers changes once we are past the line. "Tony Stark" is Alive. 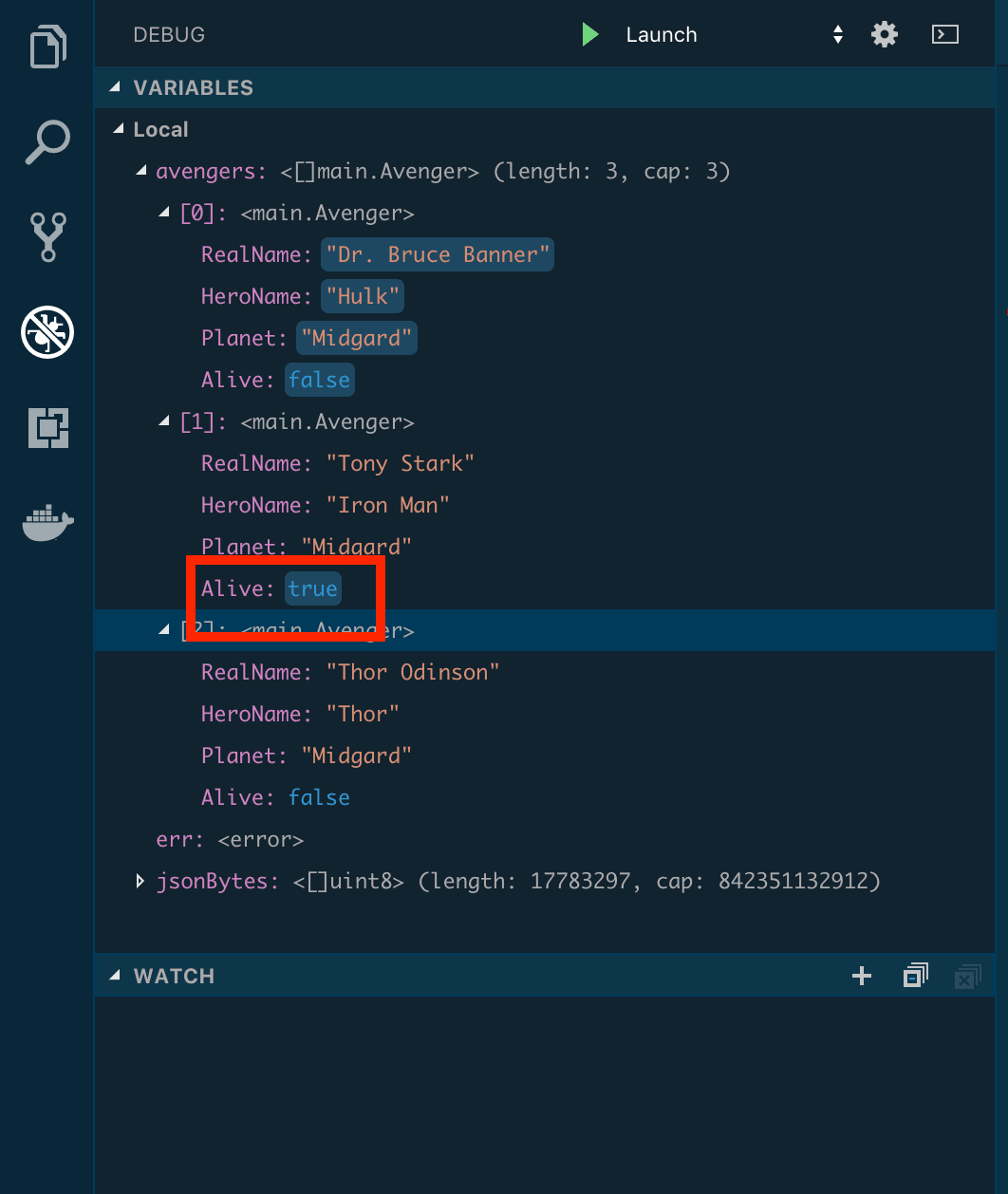 For instance, on Line 40, avengers[1].isAlive(), we could add a condition here that the breakpoint is only raised when the expression evaluates to true, as in avengers[1].Planet == "Earth".

To do this, right click on the breakpoint and select Edit Breakpoint.

If you did not have a breakpoint, you can still right click, and you will be told to Add Conditional Breakpoint.

Let’s add the condition once we’ve selected any of the above: avengers[1].Planet == "Earth".

Now if you launch the debugger with F5, it will not stop at the breakpoint. The app will run fine, and you will see the results in the Debug Console. 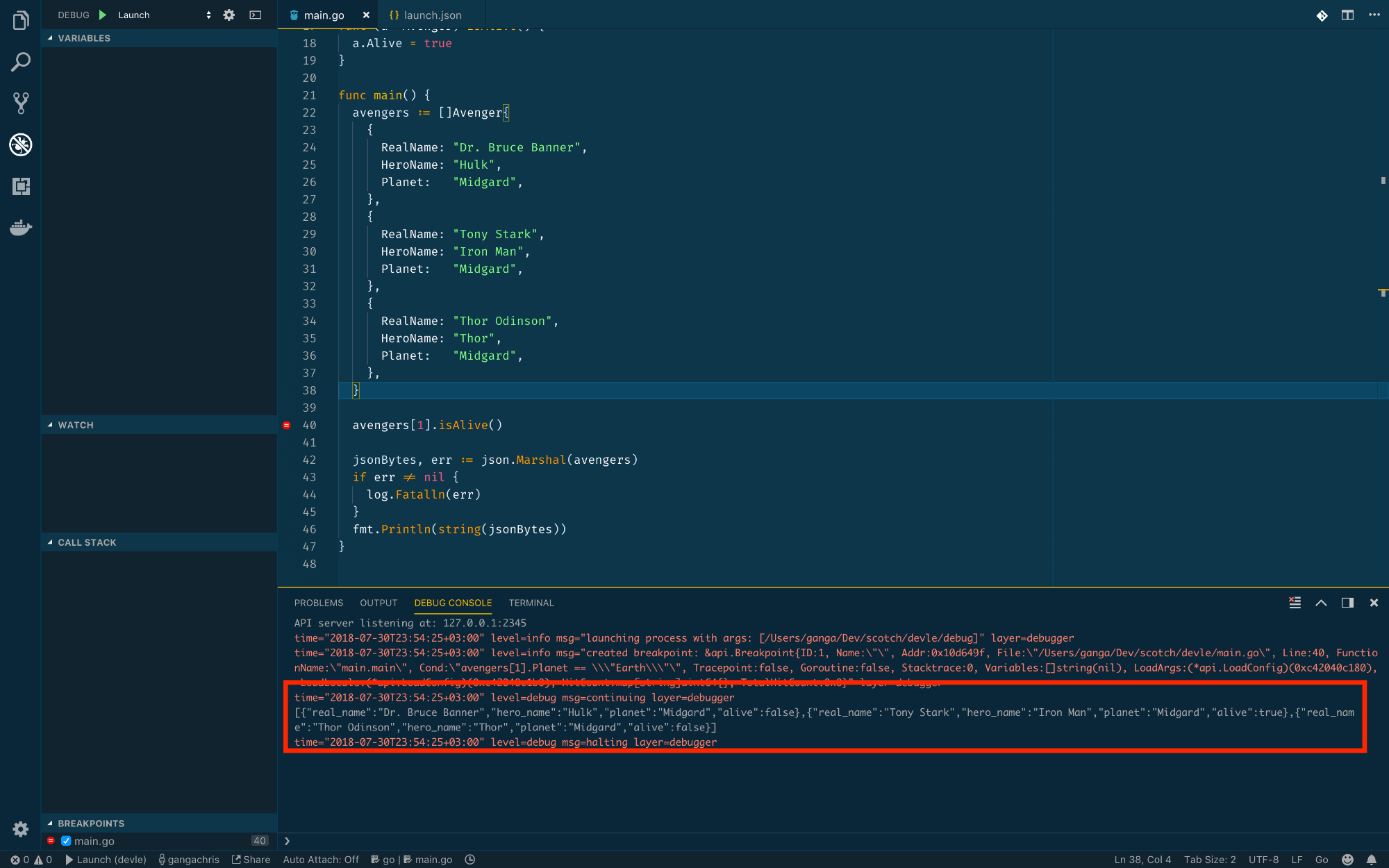 Next, edit the code to match what we expect. Change Tony Stark’s planet to Earth:

When we launch the debugger again with F5, the Debug View opens and the execution stops at the breakpoint. We can see the JSON is not displayed in the Debug Console. 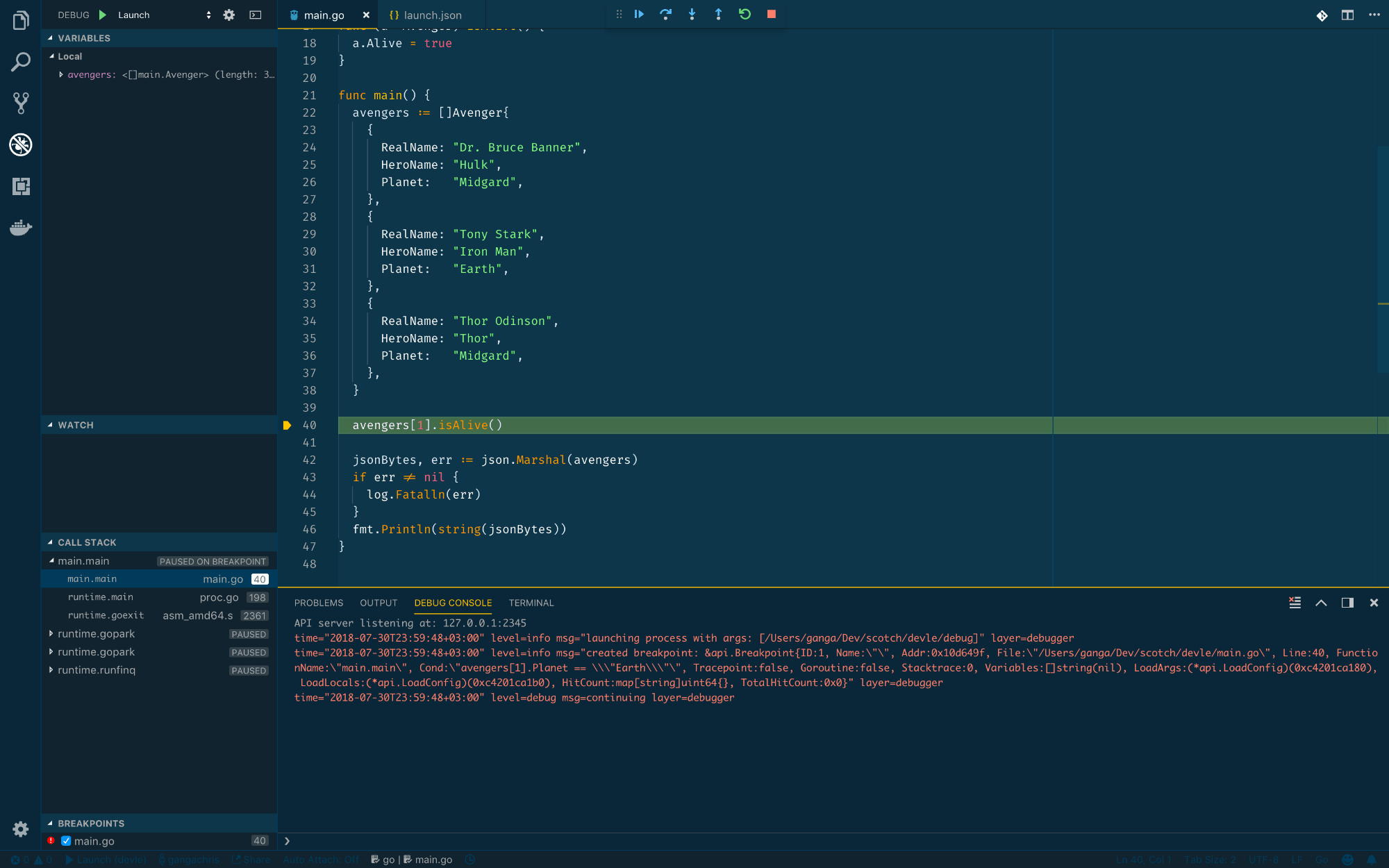 Create a test file main_test.go in the same directory, with the following contents:

The code just adds two numbers, and the test just calls the function.

If you have VSCode-Go plugin installed however, you’ll see additional options at the top of the test function - run test and debug test: 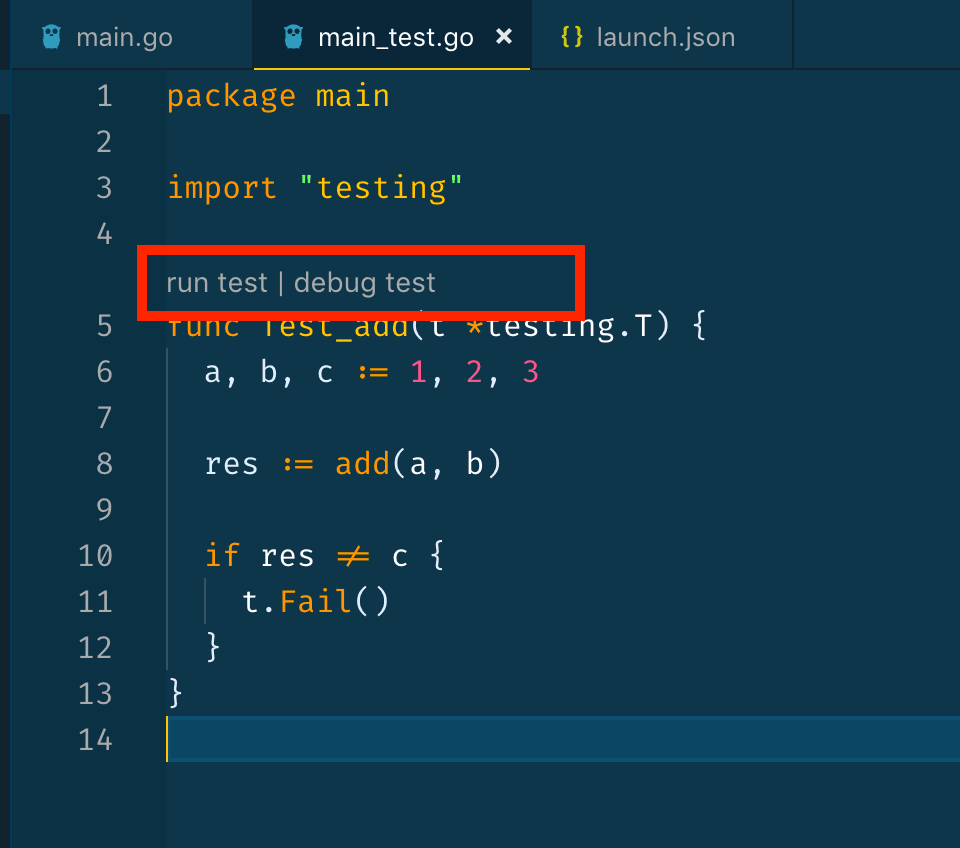 You can click on run test to run the test and see the results in the Output window.

To debug the test however, maybe because we can’t figure out something, all we need to do is add a breakpoint, like we did before, and click on debug test.

The Debug View is opened again and we can use the Debug Tool to step over and inspect the state on the variables section on the left.

Debugging is a critical part of developing software, and with tools such as Visual Studio Code, our lives can be made much easier.

We’ve added the debugger to an example project to explain the concepts, but feel free to add the debugger to any of your existing projects and play around with it. You’ll end up reducing your fmt.Println statements used to log to see the value or state of code at a give point during its execution.