Expect script is a great linux/unix utility. I have to deal with a lot of unix servers in my daily life, whether it’s at work or it’s my hosting server. So I need to remember a lot of SSH users, their passwords and then SU users and passwords. It’s kind of messy when the number of servers are huge. So I thought of writing a script that will automatically login me to the server. When I first started working on this, I got stuck as how to enter the SSH password because normal unix shells don’t have any way to send the password when it gets prompted for login. Then I come to know about expect script that allows to automate the interaction with programs that opens a terminal for input. 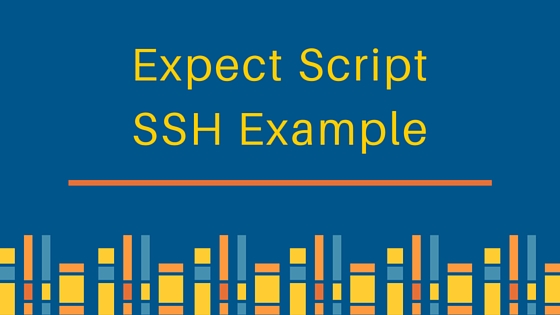 Expect Script is very easy to learn and as the name suggests it works by parsing the output of the command and when it matches the specified regular expression, it processes the specified instruction.

Here is the script I created for automatically login to the SSH server and then login with super user and then run a simple command. sshsudologin.expect

Here is the output when I run the above expect script with correct parameters.

NOTE: The above script is tested on Mac OS and Linux systems. Reference: SourceForge Page

Ask a questionSearch for more help
Was this helpful?
JournalDev • April 23, 2018

take a look at https://github.com/clarkwang/sexpect . you can write expect scripts with shells only.

I want an expect script to connect to a website, fill out a form and get back the response of server. Is it possible?

Hi Pankaj, my requirement is file transfer from Windows server(Cygwin exe is installed for SFTP) to Unix Server and vice versa. I need java code for this. do you have any idea about that ?

Hi Pankaj, I was trying almost the same example. I am trying to execute a script in server B from server A. My problem is the script is not exiting from SSH session.How can I get control back to script in server A and print some message saying the script is done. #Shell script in Server A #!/usr/bin/expect -f set timeout -1 set Username “” set password “” set ipaddress “” set script “” spawn $env(SHELL) send “ssh $Username@$ipaddress $script\r && exit” expect { “(yes/no)?” {send “yes\r”;exp_continue} “password:” {send “$password\r”;interact;} }

How can I ssh to one more session through an existing ssh session?

Awesome :) now I can have up to six consoles open on a remote machine and monitor its logs with a single key combination Ctrl-Alt-m, want to learn how I did ? https://ychaouche.informatick.net/kde

Hi there, I have a problem when trying to ssh to a solaris box using groovy script and expect To give you some background, I can ssh to the solaris box with no problem from command line using putty, I can also execute my groovy and expect script from Eclipse and I am able to connect. However when I try to do the same from a web server that is deployed on weblogic I get the following error: Error: java.lang. IllegalArgumentException: No Configuration was registered that can handle the configuration named com.sun.security.jgss.krb5.initiate This happens when I use def shell = ex.spawn(‘solarisBox’, 22, user,password) ex is an instantiated object of ExpectJ… a Java wrapper for expect if I try to use def shell = ex.spawn(“ssh user@solarisBox”) in my script shell.expect(prompt) shell.send(pass) I get Java.IOException broken pipe using groovy 1.5.5 and I believe the expect version is 2.0.7 Please help, thank you so much in advance.

Could you please share the packages for send and intreact commands, as while running command getting command not found error. The operating system am using was RHEL 6.5 .

Hi Pankaj I have gone through this web page. It was very helpful to learn about expect scripts. I need one help from you. I wrote same script which you have mentioned in this page to login to remote server. After login I am going to particular path and call shell script inside expect script. Its is executing properly in terminal( I am using Linux server). When I am calling that script on jenkins. Its not excuting properly. Please help me out its very urgent. If you need some information please let me know. Thanks pawar