How To Configure WebDAV Access with Apache on Ubuntu 12.04

Not using Ubuntu 12.04?
Choose a different version or distribution.

WebDAV is a distributed web authoring implementation built into HTTP that allows you to easily share files and work collaboratively with others.

We can install this extension within a web server to allow remote read and write access to local files through a web browser. In this guide, we will be configuring WebDAV on an Ubuntu 12.04 VPS with the Apache web server.

Install Apache on the VPS

Our implementation of WebDAV will be established on Apache through the use of the WebDAV module.

First, you will need to install Apache from Ubuntu’s default repositories.

You now have a fully functioning web server installed. It should be accessible already by navigating to your server’s IP address in a web browser.

Apache has built-in support for WebDAV with a few modules. We simply have to enable them to get access to their functions.

Enable the WebDAV modules with the following two commands:

We now need to restart the server to implement the changes:

WebDAV as a functionality is now enabled, but we still haven’t configured it correctly yet for our server.

We will create a directory that will house our WebDAV file content.

The default document root of the Apache server on Ubuntu is located at /var/www. However, we will be creating an alias, which will allow us to keep our directory content elsewhere.

In this guide, we will place our WebDAV content at /webdav/

Give the web user, which is www-data, ownership of the new directory, so that it can serve content correctly:

We can create an authentication procedure for accessing the directory content by creating an htpasswd file.

We will place it outside of the content directory so that it will not be accessible to users of our system. Create a username within the command call and you will be prompted for an associated password:

Right now, anybody can view the username and hashed password in the file. We will assign group ownership of the file to www-data and then lock down the permissions for everyone else:

Now, we will have to configure access to our content directory and tell Apache to use the WebDAV modules to serve that location. We will also have to note the authentication scheme we’ve created.

Here, our web content is served out of /var/www like normal. We will add some information that will allow Apache to treat content in our new directory as WebDAV material.

Below the directory listings, we will add an alias directive to tell Apache that requests for “/webdav” should be served out of the /webdav directory we created.

We will then add options to allow authentication using the methods we established.

Restart Apache with the following command:

You can test the results of you configuration first in a web browser, and then in a WebDAV client.

To test that your authentication is working correctly, navigate to your server’s IP address or domain name using a web browser.

You should see the default Apache index.html file:

This demonstrates that the regular web functionality is working.

Now, navigate to your IP address or domain name followed by “/webdav”:

You should be prompted for the username and password combination you set up earlier. Afterwards, you should see an empty directory listing:

We don’t currently have any content here, but we’ll be able to change that by accessing the same area with a WebDAV client.

There are many WebDAV clients and support for WebDAV access is baked into many popular file managers.

For simplicity’s sake, we’ll use an easy command-line WebDAV client called “cadaver” in this guide.

Preferably from another droplet or Linux machine, install cadaver from the default repositories:

Now, let’s create a file that we’ll upload to the WebDAV directory:

Next, we’ll connect using the same location we used to access from the browser:

You must type the “http://” portion for cadaver to find your server correctly. We will need to authenticate again, and then we’ll be dropped into a command-line interface.

From here, we can operate the client and host at the same time using commands that are similar to regular Linux commands.

To list the contents of the server directory, type:

The directory is empty. Let’s change that uploading our test file:

We can try the list command again and see the file is now on the server:

We can make a directory and change into it by typing:

We can then create a file by typing:

When we are finished, we can type exit to close the connection:

Now, if we go back to our web browser, the changes that we’ve made are visible: 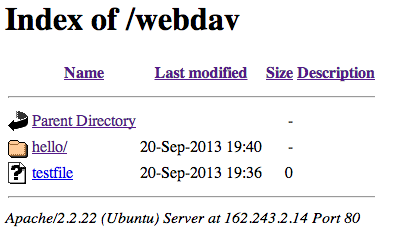 Although the directory listings are useful for seeing the files that WebDAV has available, it’s often useful, especially if you are using this for actual web content, to turn that listing off.

Restart Apache to use your changes:

Remember, you’ll need to create regular web pages for this to function correctly, like an “index.html” file:

This page will now appear when we’re navigating to the main WebDAV directory, but the edit functionality will still be enabled with clients.

You should now have a WebDAV directory complete with basic authentication. If your directory contains content that absolutely must be kept secure, you might want to implement an SSL solution on top of the password authentication. This, however, is outside of the scope of this article.

Many file managers and clients exist that can seamlessly access and modify WebDAV content as if it were additional local storage. WebDAV allows for a much more dynamic HTTP experience than is traditionally possible.

By Justin Ellingwood
You rated this helpful.
You reported this tutorial.
Was this helpful?
8
Report an issue