How To Install and Set Up Laravel with Docker Compose on Ubuntu 20.04

Not using Ubuntu 20.04?
Choose a different version or distribution.

To containerize an application refers to the process of adapting an application and its components in order to be able to run it in lightweight environments known as containers. Such environments are isolated and disposable, and can be leveraged for developing, testing, and deploying applications to production.

To allow for a streamlined development process and facilitate application debugging, we’ll keep application files in sync by using shared volumes. We’ll also see how to use docker-compose exec commands to run Composer and Artisan on the app container.

To obtain the application code that is compatible with this tutorial, download release tutorial-1.0.1 to your home directory with:

We’ll need the unzip command to unpack the application code. In case you haven’t installed this package before, do so now with:

Now, unzip the contents of the application and rename the unpacked directory for easier access:

Navigate to the travellist-demo directory:

In the next step, we’ll create a .env configuration file to set up the application.

The Laravel configuration files are located in a directory called config, inside the application’s root directory. Additionally, a .env file is used to set up environment-dependent configuration, such as credentials and any information that might vary between deploys. This file is not included in revision control.

Warning: The environment configuration file contains sensitive information about your server, including database credentials and security keys. For that reason, you should never share this file publicly.

The values contained in the .env file will take precedence over the values set in regular configuration files located at the config directory. Each installation on a new environment requires a tailored environment file to define things such as database connection settings, debug options, application URL, among other items that may vary depending on which environment the application is running.

We’ll now create a new .env file to customize the configuration options for the development environment we’re setting up. Laravel comes with an example.env file that we can copy to create our own:

Open this file using nano or your text editor of choice:

The current .env file from the travellist demo application contains settings to use a local MySQL database, with 127.0.0.1 as database host. We need to update the DB_HOST variable so that it points to the database service we will create in our Docker environment. In this guide, we’ll call our database service db. Go ahead and replace the listed value of DB_HOST with the database service name:

Feel free to also change the database name, username, and password, if you wish. These variables will be leveraged in a later step where we’ll set up the docker-compose.yml file to configure our services.

Save the file when you’re done editing. If you used nano, you can do that by pressing Ctrl+x, then Y and Enter to confirm.

Step 3 — Setting Up the Application’s Dockerfile

Although both our MySQL and Nginx services will be based on default images obtained from the Docker Hub, we still need to build a custom image for the application container. We’ll create a new Dockerfile for that.

Our travellist image will be based on the php:7.4-fpm official PHP image from Docker Hub. On top of that basic PHP-FPM environment, we’ll install a few extra PHP modules and the Composer dependency management tool.

We’ll also create a new system user; this is necessary to execute artisan and composer commands while developing the application. The uid setting ensures that the user inside the container has the same uid as your system user on your host machine, where you’re running Docker. This way, any files created by these commands are replicated in the host with the correct permissions. This also means that you’ll be able to use your code editor of choice in the host machine to develop the application that is running inside containers.

Create a new Dockerfile with:

Copy the following contents to your Dockerfile:

Don’t forget to save the file when you’re done.

Our Dockerfile starts by defining the base image we’re using: php:7.4-fpm.

After installing system packages and PHP extensions, we install Composer by copying the composer executable from its latest official image to our own application image.

A new system user is then created and set up using the user and uid arguments that were declared at the beginning of the Dockerfile. These values will be injected by Docker Compose at build time.

Finally, we set the default working dir as /var/www and change to the newly created user. This will make sure you’re connecting as a regular user, and that you’re on the right directory, when running composer and artisan commands on the application container.

When creating development environments with Docker Compose, it is often necessary to share configuration or initialization files with service containers, in order to set up or bootstrap those services. This practice facilitates making changes to configuration files to fine-tune your environment while you’re developing the application.

We’ll now set up a folder with files that will be used to configure and initialize our service containers.

To set up Nginx, we’ll share a travellist.conf file that will configure how the application is served. Create the docker-compose/nginx folder with:

Open a new file named travellist.conf within that directory:

Copy the following Nginx configuration to that file:

Save and close the file when you’re done editing.

To set up the MySQL database, we’ll share a database dump that will be imported when the container is initialized. This is a feature provided by the MySQL 5.7 image we’ll be using on that container.

Create a new folder for your MySQL initialization files inside the docker-compose folder:

The following MySQL dump is based on the database we’ve set up in our Laravel on LEMP guide. It will create a new table named places. Then, it will populate the table with a set of sample places.

Add the following code to the file:

The places table contains three fields: id, name, and visited. The visited field is a flag used to identify the places that are still to go. Feel free to change the sample places or include new ones. Save and close the file when you’re done.

We’ve finished setting up the application’s Dockerfile and the service configuration files. Next, we’ll set up Docker Compose to use these files when creating our services.

Docker Compose enables you to create multi-container environments for applications running on Docker. It uses service definitions to build fully customizable environments with multiple containers that can share networks and data volumes. This allows for a seamless integration between application components.

To set up our service definitions, we’ll create a new file called docker-compose.yml. Typically, this file is located at the root of the application folder, and it defines your containerized environment, including the base images you will use to build your containers, and how your services will interact.

The app service will build an image called travellist, based on the Dockerfile we’ve previously created. The container defined by this service will run a php-fpm server to parse PHP code and send the results back to the nginx service, which will be running on a separate container. The mysql service defines a container running a MySQL 5.7 server. Our services will share a bridge network named travellist.

The application files will be synchronized on both the app and the nginx services via bind mounts. Bind mounts are useful in development environments because they allow for a performant two-way sync between host machine and containers.

Create a new docker-compose.yml file at the root of the application folder:

A typical docker-compose.yml file starts with a version definition, followed by a services node, under which all services are defined. Shared networks are usually defined at the bottom of that file.

To get started, copy this boilerplate code into your docker-compose.yml file:

We’ll now edit the services node to include the app, db and nginx services.

The app service will set up a container named travellist-app. It builds a new Docker image based on a Dockerfile located in the same path as the docker-compose.yml file. The new image will be saved locally under the name travellist.

Even though the document root being served as the application is located in the nginx container, we need the application files somewhere inside the app container as well, so we’re able to execute command line tasks with the Laravel Artisan tool.

Copy the following service definition under your services node, inside the docker-compose.yml file:

The db service uses a pre-built MySQL 5.7 image from Docker Hub. Because Docker Compose automatically loads .env variable files located in the same directory as the docker-compose.yml file, we can obtain our database settings from the Laravel .env file we created in a previous step.

Include the following service definition in your services node, right after the app service:

The nginx service uses a pre-built Nginx image on top of Alpine, a lightweight Linux distribution. It creates a container named travellist-nginx, and it uses the ports definition to create a redirection from port 8000 on the host system to port 80 inside the container.

Include the following service definition in your services node, right after the db service:

This is how our finished docker-compose.yml file looks like:

Make sure you save the file when you’re done.

We’ll now use docker-compose commands to build the application image and run the services we specified in our setup.

Build the app image with the following command:

This command might take a few minutes to complete. You’ll see output similar to this:

When the build is finished, you can run the environment in background mode with:

This will run your containers in the background. To show information about the state of your active services, run:

Your environment is now up and running, but we still need to execute a couple commands to finish setting up the application. You can use the docker-compose exec command to execute commands in the service containers, such as an ls -l to show detailed information about files in the application directory:

The last thing we need to do before testing the application is to generate a unique application key with the artisan Laravel command-line tool. This key is used to encrypt user sessions and other sensitive data:

Now go to your browser and access your server’s domain name or IP address on port 8000:

Note: In case you are running this demo on your local machine, use http://localhost:8000 to access the application from your browser. 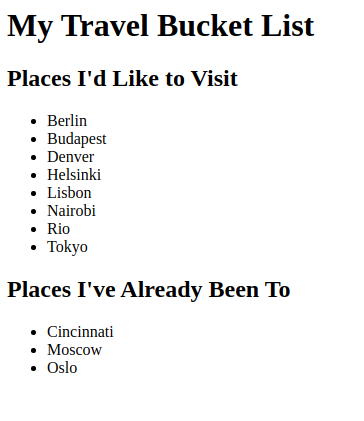 You can use the logs command to check the logs generated by your services:

If you want to pause your Docker Compose environment while keeping the state of all its services, run:

You can then resume your services with:

To shut down your Docker Compose environment and remove all of its containers, networks, and volumes, run:

In this guide, we’ve set up a Docker environment with three containers using Docker Compose to define our infrastructure in a YAML file.

From this point on, you can work on your Laravel application without needing to install and set up a local web server for development and testing. Moreover, you’ll be working with a disposable environment that can be easily replicated and distributed, which can be helpful while developing your application and also when moving towards a production environment.