How To Install Django and Set Up a Development Environment on Ubuntu 22.04

By Lisa Tagliaferri and Tony Tran

Not using Ubuntu 22.04?Choose a different version or distribution.

Django is a free and open-source web framework written in Python with its core principles being scalability, re-usability and rapid development. It is also known for its framework-level consistency and loose coupling, allowing for individual components to be independent of one another.

In this tutorial, you will set up a Django environment for development purposes on an Ubuntu 22.04 server. For a live website, you will have additional considerations, including connecting to a database, setting up a domain name, and adding layers of security. There are a variety of tutorials on Django that can help support you as you build under the Django tag.

In order to complete this tutorial, you will need:

There are several ways to install Django, the Python package manager pip within a virtual environment.

While in the server’s home directory, you’ll create the directory that will contain your Django application. Run the following command to create a directory called django-apps, or another name of your choice. Then navigate to the directory.

While inside the django-apps directory, create your virtual environment. You’ll call it the generic env, but you should use a name that is meaningful for you and your project.

You’ll know it’s activated once the prefix is changed to (env), which will look similar to the following, depending on what directory you are in:

Within the environment, install the Django package using pip. Installing Django allows us to create and run Django applications.

With Django installed on your server, you can move on to creating a test project to make sure everything is working correctly. You’ll be creating a skeleton web application.

If you followed the initial server setup tutorial or have a firewall running on your server, you’ll need to open the port you’ll be using in your server’s firewall. For the UFW firewall, you can open the port with the following command:

You now can generate an application using django-admin, a command line utility for administration tasks in Python. Then you can use the startproject command to create the project directory structure for your test website.

You will notice the output that shows this directory contains a file named manage.py and a folder named testsite. The manage.py file is similar to django-admin and puts the project’s package on sys.path. This also sets the DJANGO_SETTINGS_MODULE environment variable to point to your project’s settings.py file.

You can go over what each of these files are:

Note: Although default files are generated, you still have the ability to tweak the asgi.py or wsgi.py files at any time to fit your deployment needs.

Now you can start the server and view the website on a designated host and port by running the runserver command.

You’ll need to add your server ip address to the list of ALLOWED_HOSTS in the settings.py file located in ~/test_django_app/testsite/testsite/.

You can use your favorite text editor to add your IP address. For example, if you’re using nano, run the following command:

Once you run the command, you’ll want to navigate to the ALLOWED_HOSTS Section of the document and add your server’s IP address inside the square brackets within single or double quotes.

You can save the change and exit nano by holding down the CTRL + x keys and then pressing the y key. Next, you’ll go on to access your web app via a browser.

Finally, create an administrative user so that you can use the Django admin interface. This can be done with the createsuperuser command:

With your configuration completed, be sure to navigate back to the directory where manage.py is located:

Once the page loads, you’ll see the following: 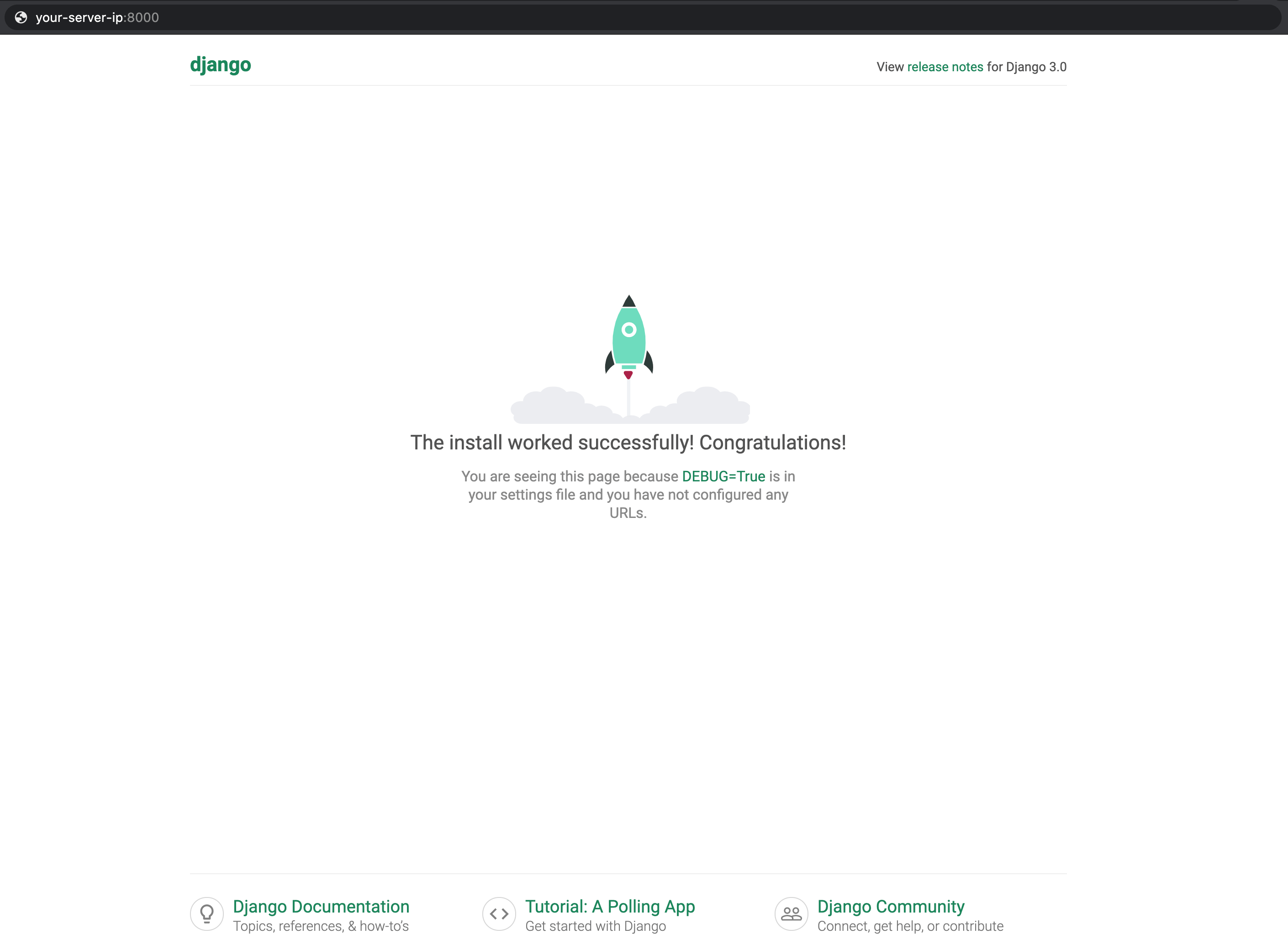 This confirms that Django was properly installed and your test project is working correctly.

This will take you to a login screen:

When you are done with testing your app, you can press CTRL + C to stop the runserver command. This will return you to your programming environment.

In this tutorial you have successfully installed Django and set up a development environment to begin working on your Django app.

You now have the foundation needed to get started building Django web applications.

Next in series: How To Create a Django App and Connect it to a Database ->

Django is a free and open-source web framework written in Python. Django’s core principles are scalability, re-usability and rapid development. It is also known for its framework-level consistency and loose coupling, allowing for individual components to be independent of one another. Don’t repeat yourself (DRY programming) is an integral part of Django principles.

Before running the ‘createsuperuser’ command, it is necessary to run the ‘migrate’ command.