How To Install Fathom Analytics on Ubuntu 20.04

Fathom Analytics is an open-source, self-hosted web analytics application that focuses on simplicity and privacy. It is written in Go and ships as a single binary file, making installation relatively straightforward.

In this tutorial you will install and configure Fathom, then install Nginx to act as a reverse proxy for the Fathom app. Finally, you will enable secure HTTPS connections by using Certbot to download and configure SSL certificates from the Let’s Encrypt Certificate Authority.

In order to complete this tutorial, you’ll first need the following:

When you’ve satisfied all the prerequisites, proceed to Step 1, where you’ll download and install Fathom.

To install the Fathom software, you’ll first download the latest release, then extract the executable file to the /usr/local/bin directory.

First, move to a directory you can write to. The /tmp directory is a good choice:

In your web browser, visit the GitHub page for Fathom’s latest software release, then find the file with a name like fathom_1.2.1_linux_amd64.tar.gz. The version number may be different.

Right-click on the link to the file, then select Copy Link (or similar, depending on your browser).

Use the curl command to download the file from the link you just copied:

You should now have a fathom_1.2.1_linux_amd64.tar.gz file in your /tmp directory. Use the tar command to extract the fathom executable and move it to /usr/local/bin:

The sudo command is necessary because /usr/local/bin is a protected directory, so you need superuser privileges to write to it.

Now use sudo and chmod to update the permissions of the fathom binary:

This makes fathom executable. To test it out, run fathom --version:

The command will print out Fathom’s version number and some additional details. You’ve successfully downloaded and installed the Fathom binary. Next you’ll configure and run Fathom for the first time.

Before configuring Fathom you’re going to create a new fathom user on your system. This new user account will be used to run the Fathom server, which will help isolate and secure the service.

Make a new user named fathom with the adduser command:

This creates a special --system user, meaning it has no password and cannot log in like a normal user could. We also make a fathom group using the --group flag, and a home directory in /opt/fathom.

Your prompt will change to something like fathom@host:~$. Until we exit this shell, every command we run will be run as the fathom user.

Copy the string to your clipboard, or note it down on a temporary scratch document of some sort, then open a new .env file for the configuration:

This will open a new blank file in the nano text editor. Feel free to use your favorite editor instead.

Paste the following into the file, making sure to update the random string to the one you generated previously:

This configuration first specifies that the server should only listen on localhost (127.0.0.1) port 8080, and that it should use an SQLite database file called fathom.db.

Save and close the file. In nano you can press CTRL+O then ENTER to save, then press CTRL+X to exit.

Now that the database is configured, we can add the first user to our Fathom instance:

Since this is the first time you’re running fathom with the database configured, you should notice some initial database migrations happening:

Your fathom.db database file is now created and the user is added.

Start the Fathom server now to test it out:

In a second terminal connected to your server, fetch the homepage of your Fathom instance using curl:

You should see a few lines of HTML code printed to your screen. This shows that the server is up and responding to requests on localhost.

Back in your first terminal, exit the fathom server process by pressing CTRL+C.

You’re all done running commands as the fathom user, so exit that session as well:

Your shell prompt should return to normal.

Fathom is now fully configured and you’ve successfully run it manually from the command line. Next we’ll set Fathom up to run as a Systemd service.

Step 3 — Setting Up Fathom as a Systemd Service

To run fathom serve at all times, even when you’re not logged into the server, you’ll set it up as a service with Systemd. Systemd is a service manager that handles starting, stopping, and restarting services on Ubuntu and many other Linux distributions.

The fathom.service file you create will contain all the configuration details that Systemd needs to properly run the server. Open the new file now:

Add the following into the file:

This file specifies when the service should be launched (After=network.target, meaning after the network is up), that it should be run as the fathom user and group, that Systemd should always try to restart the process if it exits (Restart=always), that it should be run from the /opt/fathom directory, and what command to use to run the server (ExecStart=/usr/local/bin/fathom server).

Save and close the file. Reload the Systemd config:

Enabling the service means that Systemd will start it automatically during system startup. We’ll also need to start the service manually now, just this once:

Note in the previous command that you can leave off the .service portion of the service name. Finally, check the status of the service to make sure it’s running:

The service is up and running again on localhost port 8080. Next we’ll set up Nginx as a reverse proxy to expose the Fathom service to the outside world.

Putting a web server such as Nginx in front of your application server can improve performance by offloading caching, compression, and static file serving to a more efficient process. We’re going to install Nginx and configure it to reverse proxy requests to Fathom, meaning it will take care of handing requests from your users to Fathom and back again.

Next, open up a new Nginx configuration file in the /etc/nginx/sites-available directory. We’ll call ours fathom.conf but you could use a different name:

Paste the following into the new configuration file, being sure to replace your_domain_here with the domain that you’ve configured to point to your Fathom server. This should be something like fathom.example.com, for instance:

This configuration is HTTP-only for now. We’ll let Certbot take care of configuring SSL in the next step. The rest of the config sets up logging locations and then passes all traffic along to our Fathom server at http://localhost:8080, adding a few important proxy forwarding headers along the way.

Save and close the file, then enable the configuration by linking it into /etc/nginx/sites-enabled/:

Use nginx -t to verify that the configuration file syntax is correct:

And finally, reload the nginx service to pick up the new configuration:

Your Fathom site should now be available on plain HTTP. Load http://your_domain_here and it will look like this:

Now that you have your site up and running over HTTP, it’s time to secure the connection with Certbot and Let’s Encrypt certificates.

Thanks to Certbot and the Let’s Encrypt free certificate authority, adding SSL encryption to our Fathom app will take only two commands.

Next, run certbot in --nginx mode, and specify the same domain you used in the Nginx server_name config:

You’ll be prompted to agree to the Let’s Encrypt terms of service, and to enter an email address.

Afterwards, you’ll be asked if you want to redirect all HTTP traffic to HTTPS. It’s up to you, but this is generally recommended and safe to do.

After that, Let’s Encrypt will confirm your request and Certbot will download your certificate:

Certbot will automatically reload Nginx to pick up the new configuration and certificates. Reload your site and it should switch you over to HTTPS automatically if you chose the redirect option.

Your site is now secure and it’s safe to log in with the user details you set up in Step 2.

When you successfully log in, you’ll see a prompt to get your first website set up with Fathom: 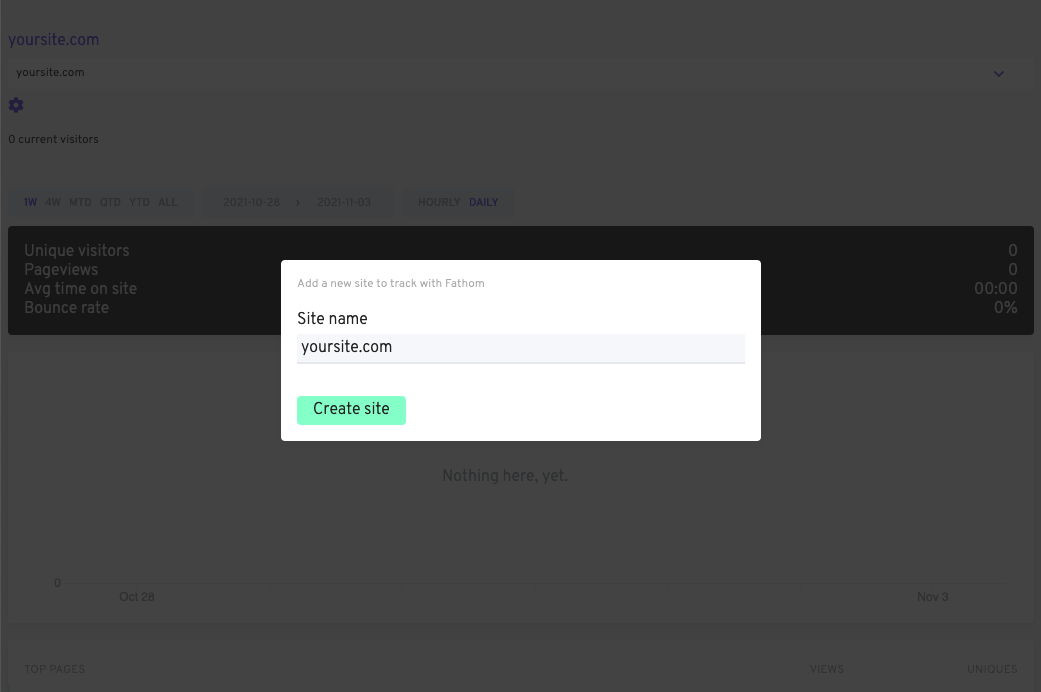 Once that is done you’ll see the (currently empty) dashboard for the site you just set up:

You have successfully installed and secured your Fathom analytics software.

In this tutorial, you downloaded, installed, and configured the Fathom Analytics app, then set up an Nginx reverse proxy and secured it using Let’s Encrypt SSL certificates.