How To Use Git Effectively
View

How to Push an Existing Project to GitHub

By Nicholas Cerminara
Developer and author at DigitalOcean.

GitHub is a cloud-hosted Git management tool. Git is distributed version control, meaning the entire repository and history lives wherever you put it. People tend to use GitHub in their business or development workflow as a managed hosting solution for backups of their repositories. GitHub takes this even further by letting you connect with coworkers, friends, organizations, and more.

In this tutorial, you will learn how to take an existing project you are working on and push it, so it also exists on GitHub.

To initialize the repo and push it to GitHub you’ll need:

Sign in to GitHub and create a new empty repo. You can choose to either initialize a README or not. It doesn’t really matter because we’re just going to override everything in this remote repository anyways. 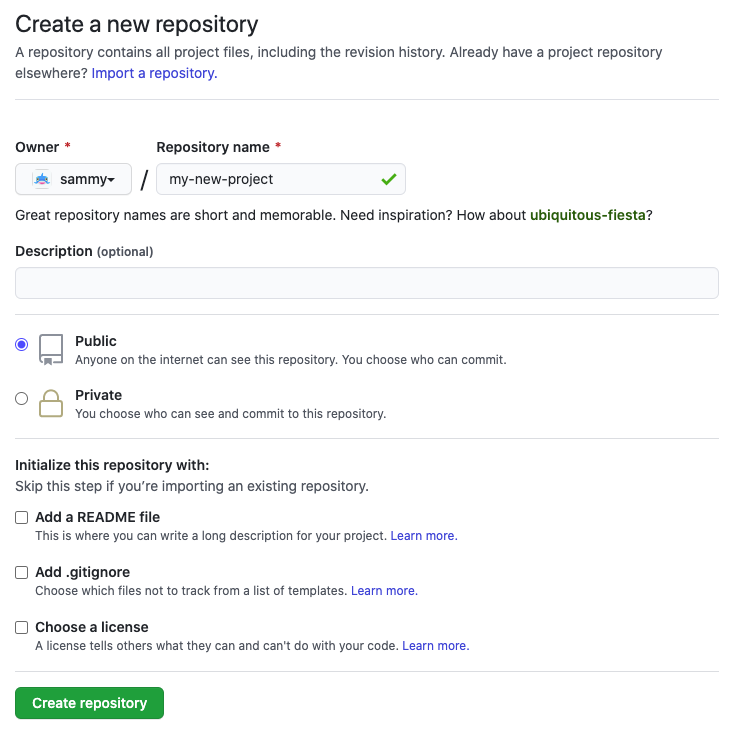 Warning: Through the rest of this tutorial, we’ll assume your GitHub username is sammy and the repo you created is named my-new-project. It is important that you replace these placeholders with your actual username and repo name.

From your terminal, run the following commands after navigating to the folder you would like to add.

Make sure you are in the root directory of the project you want to push to GitHub and run:

Note: If you already have an initialized Git repository, you can skip this command.

This step creates a hidden .git directory in your project folder, which the git software recognizes and uses to store all the metadata and version history for the project.

Add the files to Git index

The git add command is used to tell git which files to include in a commit, and the -A (or --all) argument means “include all”.

The git commit command creates a new commit with all files that have been “added”. The -m (or --message) sets the message that will be included alongside the commit, used for future reference to understand the commit. In this case, the message is: 'Added my project'.

In git, a “remote” refers to a remote version of the same repository, which is typically on a server somewhere (in this case, GitHub). “origin” is the default name git gives to a remote server (you can have multiple remotes) so git remote add origin is instructing git to add the URL of the default remote server for this repo.

The -u (or --set-upstream) flag sets the remote origin as the upstream reference. This allows you to later perform git push and git pull commands without having to specify an origin since we always want GitHub in this case.

The -f (or --force) flag stands for force. This will automatically overwrite everything in the remote directory. We’re using it here to overwrite the default README that GitHub automatically initialized.

Note: If you did not include the default README when creating the project on GitHub, the -f flag isn’t really necessary.

Now you are all set to track your code changes remotely in GitHub! As a next step, here’s a complete guide to how to use git.

Once you start collaborating with others on the project, you’ll want to know how to create a pull request.

Want to deploy your application quickly? Try Cloudways, the #1 managed hosting provider for small-to-medium businesses, agencies, and developers - for free. DigitalOcean and Cloudways together will give you a reliable, scalable, and hassle-free managed hosting experience with anytime support that makes all your hosting worries a thing of the past. Start with $100 in free credits!

Thanks for the article - its a great writeup to address this common issue. For this to work for me, at least using https github repo paths, I had to add

after adding my commit message.

The authenticity of host ‘github.com (13.234.210.38)’ can’t be established.
ED25519 key fingerprint is SHA256:+DiY3wvvV6TuJJhbpZisF/zLDA0zPMSvHdkr4UvCOqU. This key is not known by any other names Are you sure you want to continue connecting (yes/no/[fingerprint])? yes Warning: Permanently added ‘github.com’ (ED25519) to the list of known hosts. git@github.com: Permission denied (publickey). fatal: Could not read from remote repository.

Please make sure you have the correct access rights and the repository exists.