How To Use Traefik as a Reverse Proxy for Docker Containers on Ubuntu 16.04

Docker can be an efficient way to run web applications in production, but you may want to run multiple applications on the same Docker host. In this situation, you’ll need to set up a reverse proxy since you only want to expose ports 80 and 443 to the rest of the world.

Traefik is a Docker-aware reverse proxy that includes its own monitoring dashboard. In this tutorial, you’ll use Traefik to route requests to two different web application containers: a Wordpress container and an Adminer container, each talking to a MySQL database. You’ll configure Traefik to serve everything over HTTPS using Let’s Encrypt.

To follow along with this tutorial, you will need the following:

The Traefik project has an official Docker image, so we will use that to run Traefik in a Docker container.

But before we get our Traefik container up and running, we need to create a configuration file and set up an encrypted password so we can access the monitoring dashboard.

We’ll use the htpasswd utility to create this encrypted password. First, install the utility, which is included in the apache2-utils package:

The output from the program will look like this:

You’ll use this output in the Traefic configuration file to set up HTTP Basic Authentication for the Traefik health check and monitoring dashboard. Copy the entire output line so you can paste it later.

To configure the Traefik server, we’ll create a new configuration file called traefik.toml using the TOML format. TOML is a configuration language similar to INI files, but it is standardized. This file lets us configure the Traefik server and various integrations, or providers, we want to use. In this tutorial, we will use three of Traefik’s available providers: web, docker, and acme, which is used to support TLS using Let’s Encrypt.

First, add two named entry points, httpand https, that all backends will have access to by default:

We’ll configure the http and https entry points later in this file.

Next, configure the web provider, which gives you access to a dashboard interface. This is where you’ll paste the output from the htpasswd command:

The dashboard is a separate web application that will run within the Traefik container. We set the dashboard to run on port 8080.

The web.auth.basic section configures HTTP Basic Authentication for the dashboard. Use the output from the htpasswd command you just ran for the value of the users entry. You could specify additional logins by separating them with commas.

Next, define the entry points. The entryPoints section configures the addresses that Traefik and the proxied containers can listen on. Add these lines to the file:

This section is called acme because ACME is the name of the protocol used to communicate with Let’s Encrypt to manage certificates. To have Traefik generate certificates for our hosts, we set the email key to your email address. We then specify that we will store the information that we will receive from Let’s Encrypt in a JSON file called acme.json. The entryPoint key needs to point to the entry point handling port 443, which in our case is the https entry point.

The last two keys, onHostRule and onDemand, dictate how Traefik should go about generating certificates. We want to fetch our certificates as soon as our containers with specified hostnames are created, and that’s what the onHostRule setting will do. The onDemand setting would attempt to generate certificates the first time that a request is made. This would slow down the first request and be very noticeable to the visitor, so we’ll avoid that.

Save the file and exit the editor. With all of this configuration in place, we can fire up Traefik.

Next, create a Docker network for the proxy to share with containers. The Docker network is necessary so that we can use it with applications that are run using Docker Compose. Let’s call this network proxy.

Next, create an empty file which will hold our Let’s Encrypt information. We’ll share this into the container so Traefik can use it:

Traefik will only be able to use this file if the root user inside of the container has unique read and write access to it. To do this, lock down the permissions on acme.json so that only the owner of the file has read and write permission.

Once the file gets passed to Docker, the owner will automatically change to the root user inside the container.

Finally, create the Traefik container with this command:

The command is a little long so let’s break it down.

We use the -d flag to run the container in the background as a daemon. We then share our docker.sock file into the container so that the Traefik process can listen for changes to containers. We also share the traefik.toml configuration file and the acme.json file we created into the container.

Next, we map ports :80 and :443 of our Docker host to the same ports in the Traefik container so Traefik receives all HTTP and HTTPS traffic to the server.

Then we set up two Docker labels that tell Traefik to direct traffic to the hostname monitor.example.com to port :8080 within the Traefik container, exposing the monitoring dashboard.

Finally, we use the traefik:1.3.6-alpine image for this container, because it’s small.

A Docker image’s ENTRYPOINT is a command that always runs when a container is created from the image. In this case, the command is the traefik binary within the container. You can pass additional arguments to that command when you launch the container. In our case, we pass the argument --docker to the ENTRYPOINT which ensures that the docker provider is registered with the default settings. The docker provider enables Traefik to act as a proxy in front of Docker containers. The default configuration of the Docker provider works well for us, so we won’t need to configure it in our traefik.toml.

With the container started, you now have a dashboard you can access to see the health of your containers. You can also use this dashboard to visualize the frontends and backends that Traefik has registered. Access the monitoring dashboard by pointing your browser to https://monitor.example.com. You will be prompted for your username and password, which are admin and the password you configured in Step 1.

Once logged in,. you’ll see an interface similar to this: 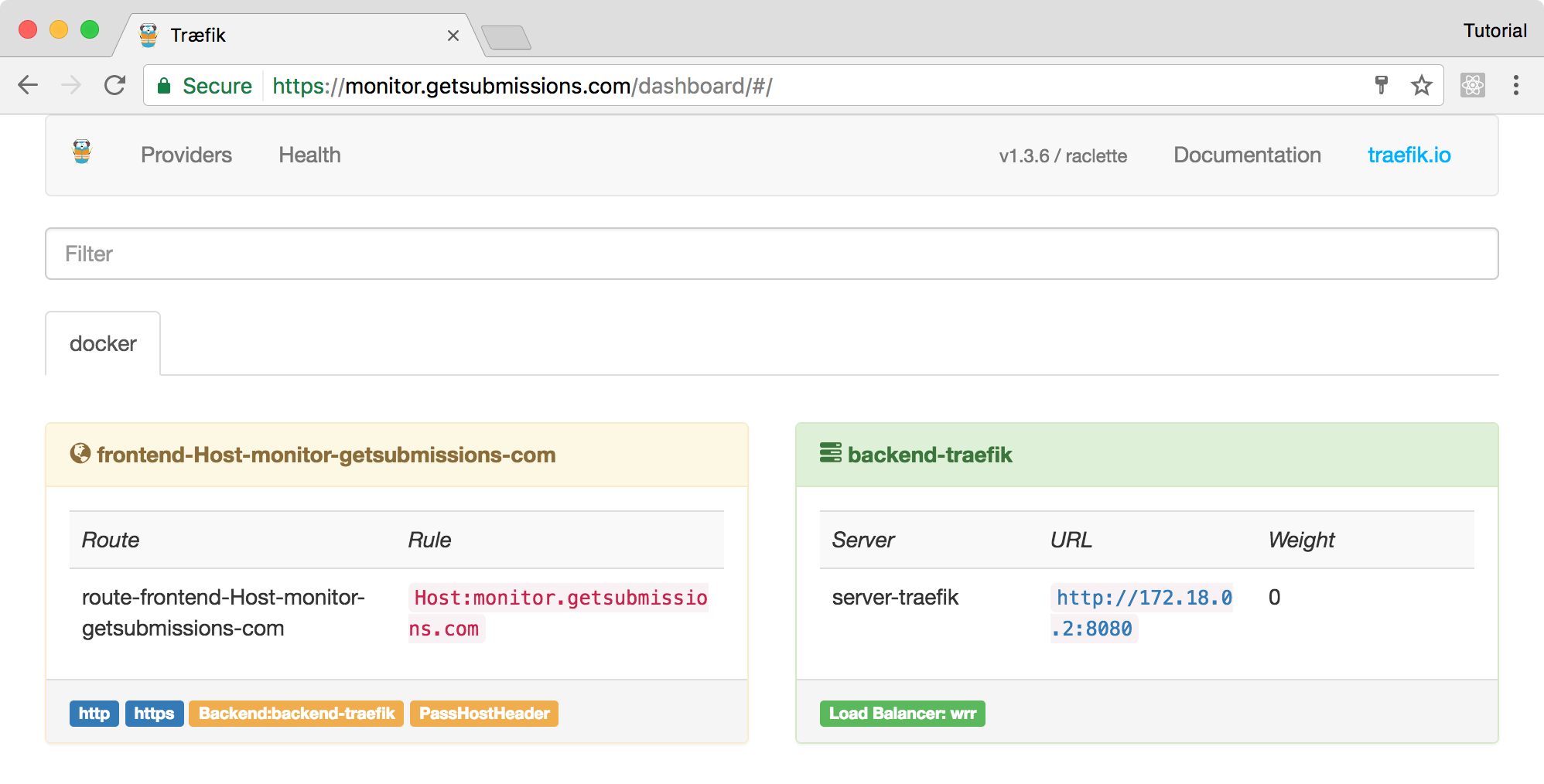 There isn’t much to see just yet, but leave this window open, and you will see the contents change as you add containers for Traefik to work with.

We now have our Traefik proxy running, configured to work with Docker, and ready to monitor other Docker containers. Let’s start some containers for Traefik to act as a proxy for.

With the Traefik container running, you’re ready to run applications behind it. Let’s launch the following cotainers behind Traefik:

We’ll manage both of these applications with Docker Compose using a docker-compose.yml file:

Add the following lines to the file to specify the version and the networks we’ll use:

We use Docker Compose version 3 because it’s the newest major version of the Compose file format.

For Traefik to recognize our applications, they must be part of the same network, and since we created the network manually, we pull it in by specifying the network name of proxy and setting external to true. Then we define another network so that we can connect our exposed containers to a database container that we won’t expose through Traefik. We’ll call this network internal.

Next, we’’ll define each of our services, one at a time. Let’s start with the blog container, which we’ll base on the official WordPress image. Add this configuration to the file:

The labels section is where you specify configuration values for Traefik. Docker labels don’t do anything by themselves, but Traefik reads these so it knows how to treat containers. Here’s what each of these labels does:

With this configuration, all traffic sent to our Docker host’s port 80 will be routed to the blog container.

We assign this container to two different networks so that Traefik can find it via the proxy network and it can communicate with the database container through the internal network.

Lastly, the depends_on key tells Docker Compose that this container needs to start after its dependencies are running. Since WordPress needs a database to run, we must run our mysql container before starting our blog container.

Next, configure the MySQL service by adding this configuration to your file:

We’re using the official MySQL 5.7 image for this container. You’ll notice that we’re once again using an environment item without a value. The MYSQL_ROOT_PASSWORD and WORDPRESS_DB_PASSWORD variables will need to be set to the same value to make sure that our WordPress container can communicate with the MySQL. We don’t want to expose the mysql container to Traefik or the outside world, so we’re only assigning this container to the internal network. Since Traefik has access to the Docker socket, the process will still expose a frontend for the mysql container by default, so we’ll add the label traefik.enable=false to specify that Traefik should not expose this container.

Finally, add this configuration to define the Adminer container:

This container is based on the official Adminer image. The network and depends_on configuration for this container exactly match what we’re using for the blog container.

Save the file and exit the text editor.

Next, set values in your shell for the WORDPRESS_DB_PASSWORD and MYSQL_ROOT_PASSWORD variables before you start your containers:

With these variables set, run the containers using docker-compose:

Now take another look at the Traefik admin dashboard. You’ll see that there is now a backend and a frontend for the two exposed servers: 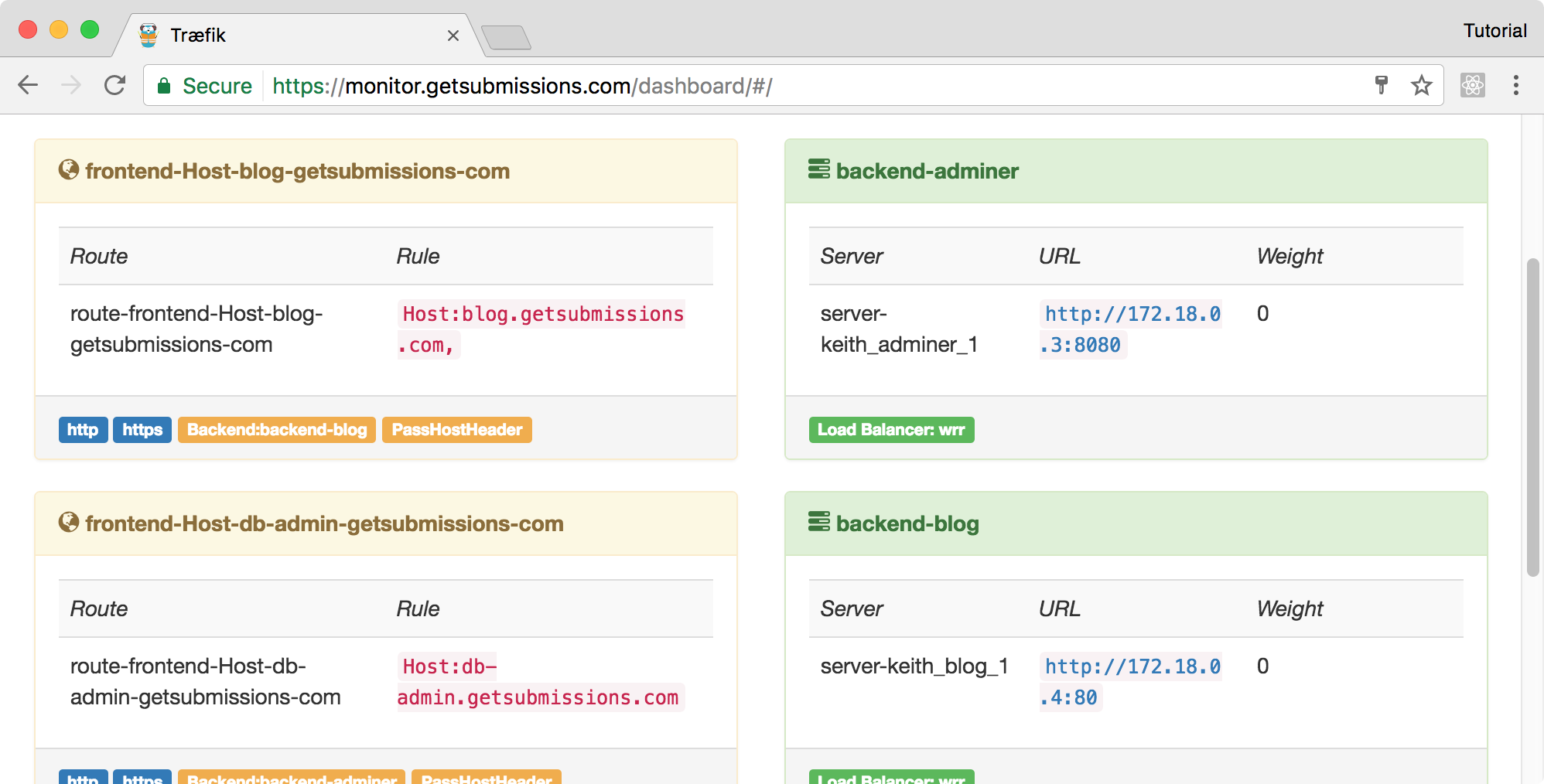 Navigate to blog.example.com, substituting example.com with your domain. You’ll be redirected to a TLS connection and can now complete the Wordpress setup: 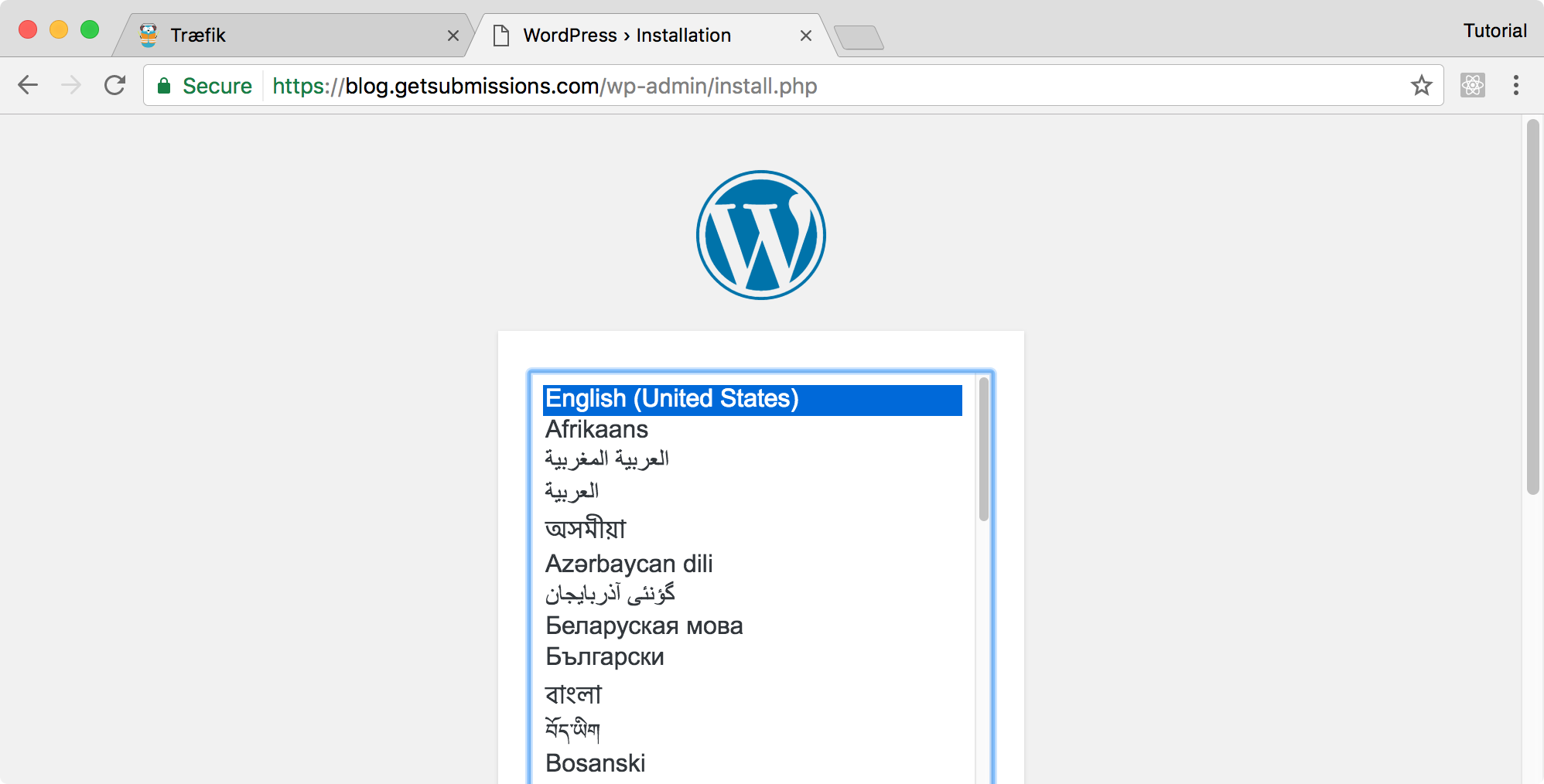 Now access Adminer by visiting db-admin.example.com in your browser, again substituting example.com with your domain. The mysql container isn’t exposed to the outside world, but the adminer container has access to it through the internal Docker network that they share using the mysql container name as a host name.

On the Adminer login screen, use the username root, use mysql for the server, and use the value you set for MYSQL_ROOT_PASSWORD for the password. Once logged in, you’ll see the Adminer user interface: 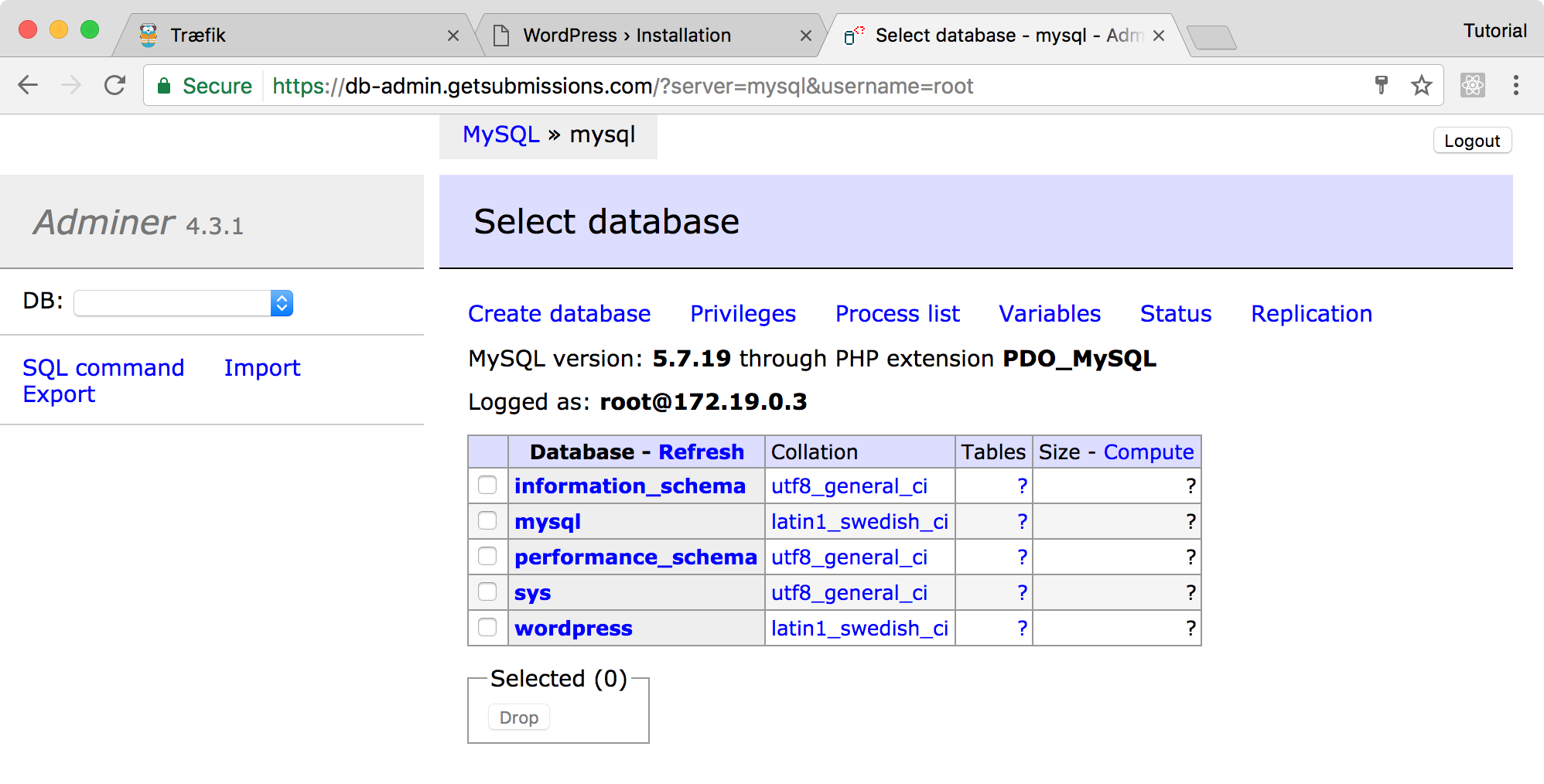 Both sites are now working, and you can use the dashboard at monitor.example.com to keep an eye on your applications.

In this tutorial, you configured Traefik to proxy requests to other applications in Docker containers.

Traefik’s declarative configuration at the application container level makes it easy to configure more services, and there’s no need to restart the traefik container when you add new applications to proxy traffic to since Traefik notices the changes immediately through the Docker socket file it’s monitoring.

To learn more about what you can do with Traefik, head over to the official Traefik documentation.

Training Architect at A Cloud Guru by day. Programming content creator (as @coderjourney) by night.