How To Visualize and Interpret Neural Networks in Python

The author selected Open Sourcing Mental Illness to receive a donation as part of the Write for DOnations program.

Neural networks achieve state-of-the-art accuracy in many fields such as computer vision, natural-language processing, and reinforcement learning. However, neural networks are complex, easily containing hundreds of thousands, or even, millions of operations (MFLOPs or GFLOPs). This complexity makes interpreting a neural network difficult. For example: How did the network arrive at the final prediction? Which parts of the input influenced the prediction? This lack of understanding is exacerbated for high-dimensional inputs like images: What does an explanation for an image classification even look like?

Research in Explainable AI (XAI) works to answers these questions with a number of different explanations. In this tutorial, you’ll specifically explore two types of explanations: 1. Saliency maps, which highlight the most important parts of the input image; and 2. decision trees, which break down each prediction into a sequence of intermediate decisions. For both of these approaches, you’ll produce code that generates these explanations from a neural network.

Along the way, you’ll also use deep-learning Python library PyTorch, computer-vision library OpenCV, and linear-algebra library numpy. By following this tutorial, you will gain an understanding of current XAI efforts to understand and visualize neural networks.

You can find all the code and assets from this tutorial in this repository.

Let’s create a workspace for this project and install the dependencies you’ll need. You’ll call your workspace XAI, short for Explainable Artificial Intelligence:

Navigate to the XAI directory:

Then install PyTorch, a deep-learning framework for Python that you’ll use in this tutorial.

On macOS, install PyTorch with the following command:

Now install prepackaged binaries for OpenCV, Pillow, and numpy, which are libraries for computer vision and linear algebra, respectively. OpenCV and Pillow offer utilities such as image rotations, and numpy offers linear algebra utilities, such as a matrix inversion:

On Linux distributions, you will need to install libSM.so:

Finally, install nbdt, a deep-learning library for neural-backed decision trees, which we will discuss in the last step of this tutorial:

With the dependencies installed, let’s run an image classifier that has already been trained.

In this step, you will set up an image classifier that has already been trained.

First, an image classifier accepts images as input, and outputs a predicted class (like Cat or Dog). Second, pretained means this model has already been trained and will be able to predict classes, accurately, straightaway. Your goal will be to visualize and interpret this image classifier: How does it make decisions? Which parts of the image did the model use for its prediction?

Download the following Python script, which will load an image, load a neural network with its weights, and classify the image using the neural network:

Note: For a more detailed walkthrough of this file step_2_pretrained.py, please see Step 2 — Running a Pretrained Animal Classifier in the How To Trick a Neural Network tutorial.

Next you’ll download the following image of a cat and dog, as well, to run the image classifier on. 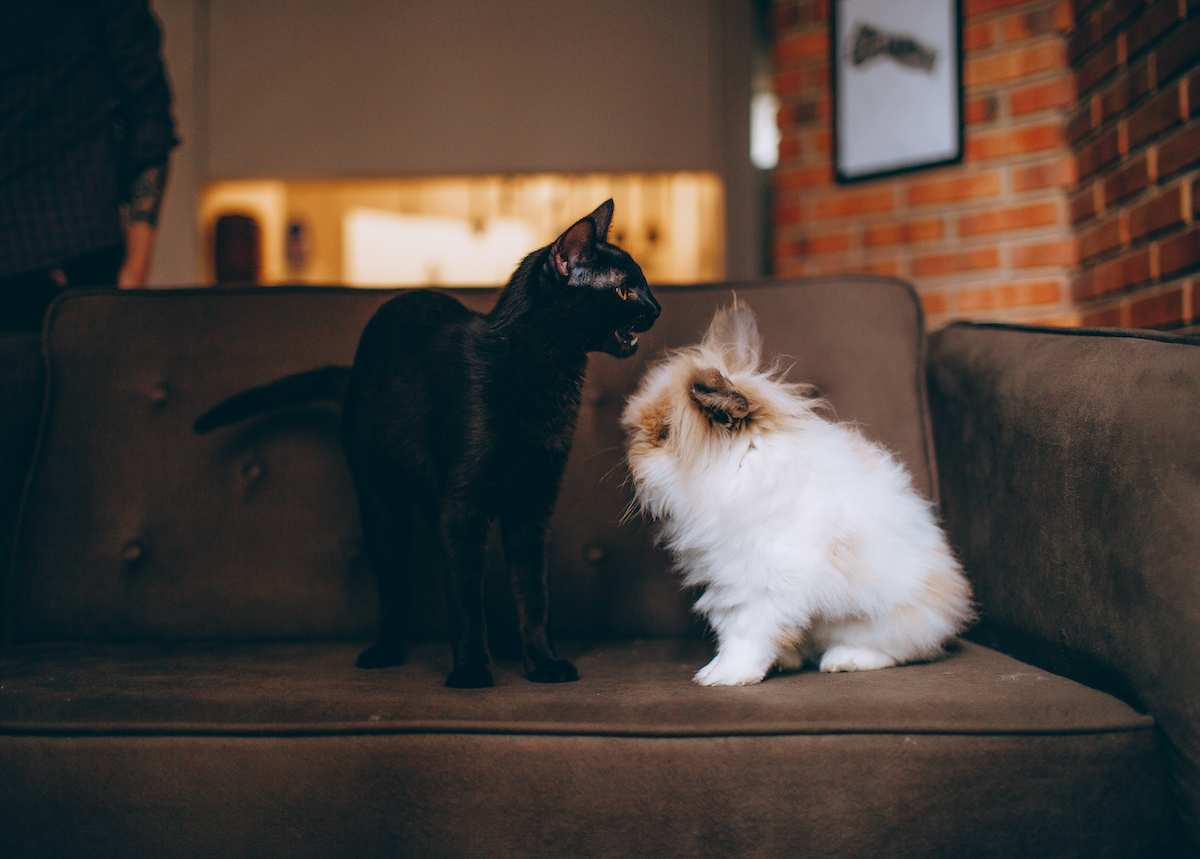 That concludes running inference with your pretrained model.

Although this neural network produces predictions correctly, we don’t understand how the model arrived at its prediction. To better understand this, start by considering the cat and dog image that you provided to the image classifier. 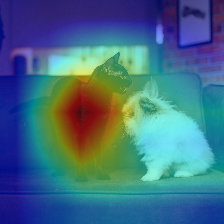 The model classifies the image as Persian cat by looking at the cat. For this tutorial, we will refer to visualizations like this example as saliency maps, which we define to be heatmaps that highlight pixels influencing the final prediction. There are two types of saliency maps: 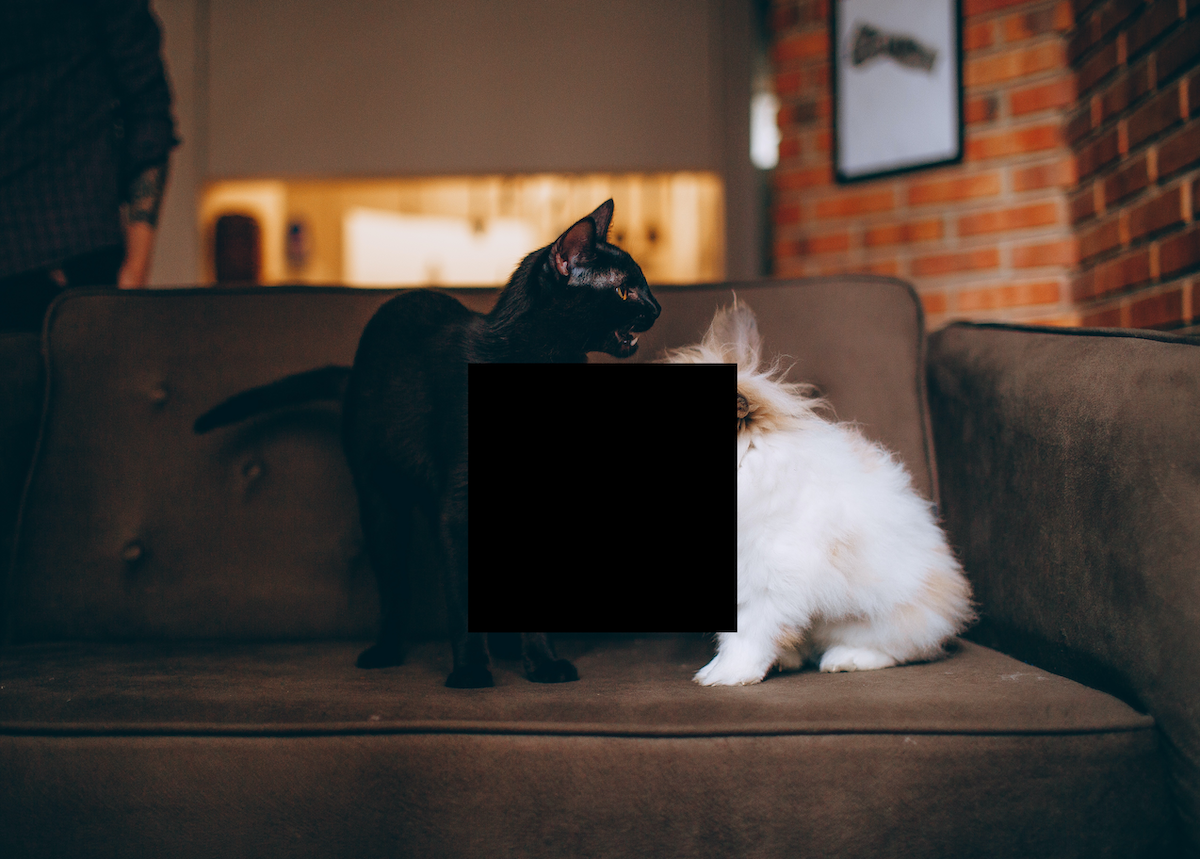 This concludes our brief overview of saliency maps. In the next step, you will implement one model-aware technique called a Class Activation Map (CAM).

Class Activation Maps (CAMs) are a type of model-aware saliency method. To understand how a CAM is computed, we first need to discuss what the last few layers in a classification network do. Following is an illustration of a typical image-classification neural network, for the method in this paper on Learning Deep Features for Discriminative Localization.

The figure describes the following process in a classification neural network. Note the image is represented as a stack of rectangles; for a refresher on how images are represented as a tensor, see How to Build an Emotion-Based Dog Filter in Python 3 (Step 4):

We’ve omitted several details that are not necessary to explain CAM. Now, we can use this to compute CAM. Let us revisit an expanded version of this figure, still for the method in the same paper. Focus on the second row. 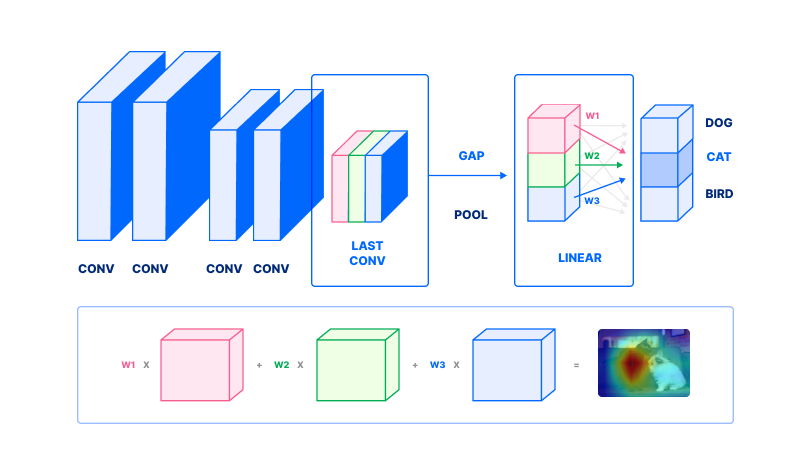 This final weighted sum is the class activation map.

Next, we will implement class activation maps. This section will be broken into the three steps that we’ve already discussed:

Create an image loader that will load, resize, and crop your image, but leave the color untouched. This ensures your image has the correct dimensions. Add this before your main function:

In load_raw_image, you first access the one argument passed to the script sys.argv[1]. Then, open the image specified using Image.open. Next, you define a number of different transformations to apply to the images that are passed to your neural network:

Next, load the pretrained model. Add this function after your first load_raw_image function, but before the main function:

In the get_model function, you:

Next, compute the class activation map itself. Add this function before your main function:

The compute_cam function mirrors the three steps outlined at the start of this section and in the section before.

This concludes computation for a class activation map.

Our last helper function is a utility that saves the class activation map. Add this function before your main function:

This utility save_cam performs the following:

Next, populate the main function with some code to run the neural network on a provided image:

In main, run the network to obtain a prediction.

This now concludes our class activation script. Save and close your file. Check that your script matches the step_3_cam.py in this repository.

Then, run the script:

Your script will output the following:

This will produce a heatmap.jpg and combined.jpg akin to the following images showing the heatmap and the heatmap combined with the cat/dog image. 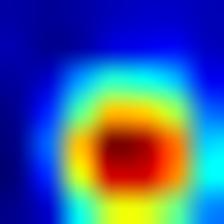 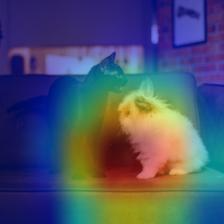 You have produced your first saliency map. We will end the article with more links and resources for generating other kinds of saliency maps. In the meantime, let us now explore a second approach to explainability—namely, making the model itself interpretable.

Decision Trees belong to a family of rule-based models. A decision tree is a data tree that displays possible decision pathways. Each prediction is the result of a series of predictions. 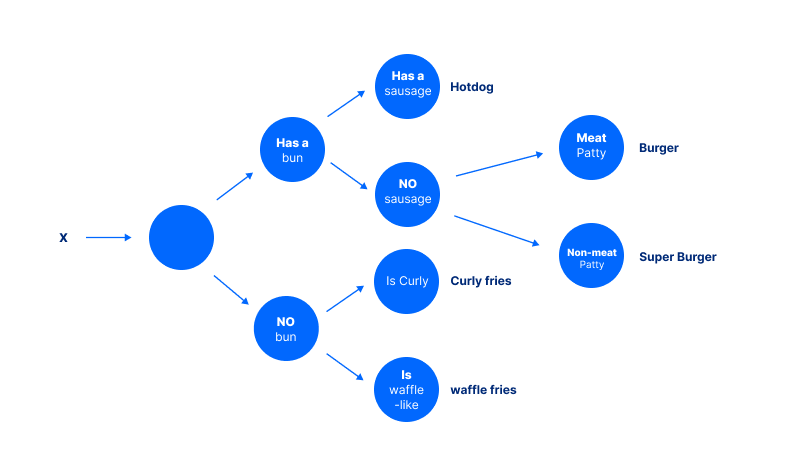 Instead of just outputting a prediction, each prediction also comes with justification. For example, to arrive at the conclusion of “Hotdog” for this figure the model must first ask: “Does it have a bun?”, then ask: “Does it have a sausage?” Each of these intermediate decisions can be verified or challenged separately. As a result, classic machine learning calls these rule-based systems “interpretable.”

One question is: How are these rules created? Decision Trees warrant a far more detailed discussion of its own but in short, rules are created to “split classes as much as possible.” Formally, this is “maximizing information gain.” In the limit, maximizing this split makes sense: If the rules perfectly split classes, then our final predictions will always be correct.

Now, we move on to using a neural network and decision tree hybrid. For more on decision trees, see Classification and Regression Trees (CART) overview.

Now, we will run inference on a neural network and decision tree hybrid. As we will find, this gives us a different type of explainability: direct-model interpretability.

First, add the Python boilerplate. Import the necessary packages and declare a main function. maybe_install_wordnet sets up a prerequisite that our program may need:

Start by loading the pretrained model, as before. Add the following before your main function:

This function does the following:

Next, load and preprocess the image for model inference. Add the following before your main function:

In load_image, you start by loading the image from the provided URL, using a custom utility method called load_image_from_path. Next, you define a number of different transformations to apply to the images that are passed to your neural network:

Next, define a utility function to log both the prediction and the intermediate decisions that led up to it. Place this before your main function:

The print_explanations function computes and logs predictions and decisions:

Conclude the script by populating the main with utilities we have written so far:

We perform model inference with explanations in several steps:

Close your file, and double-check your file contents matches step_4_nbdt.py. Then, run your script on the photo from earlier of two pets side-by-side.

This will output the following, both the prediction and the corresponding justifications.

You have now run two types of Explainable AI approaches: a post-hoc explanation like saliency maps and a modified interpretable model using a rule-based system.

There are many explainability techniques not covered in this tutorial. For further reading, please be sure to check out other ways to visualize and interpret neural networks; the utilities number many, from debugging to debiasing to avoiding catastrophic errors. There are many applications for Explainable AI (XAI), from sensitive applications like medicine to other mission-critical systems in self-driving cars.

I’m a diglot by definition, lactose intolerant by birth but an ice-cream lover at heart. Call me wabbly, witling, whatever you will, but I go by Alvin